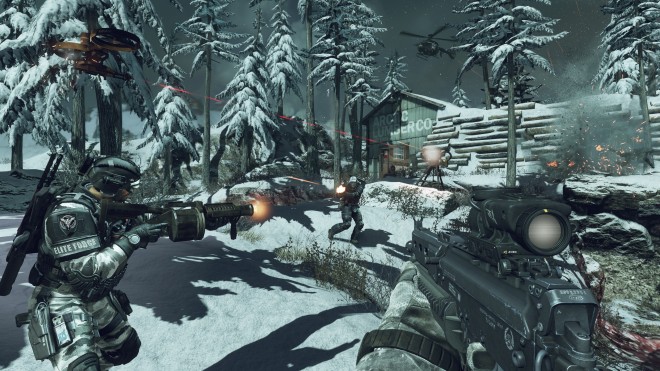 Quick-Scoping ‘Won’t Be Viable’ in Call of Duty: Ghosts, According to IW Executive Producer

“Quick-scoping” – the ability aim down the scope of a sniper rifle quickly, taking out an opponent with little to no adjustment period – has always been a major point of contention among the Call of Duty community since the “play style” first appeared in the original Modern Warfare and became a ‘thing’ by the time Modern Warfare 2 rolled along.

Since then, the argument over the legitimacy of the play style – is it a proper way to play Call of Duty, or is it just an unintended glitch? – seems to have split the community right in two; the lovers and haters.

Between developers Infinity Ward and Treyarch, we’ve seen varying outlooks on the matter. While Treyarch has been known to steer away from the idea, their latest entry, Black Ops 2, appeared a little more open to it, allowing players to “quick-scope” more easily than in the original Black Ops or even World at War. Infinity Ward, on the other hand, seems to have always welcomed the idea with open arms in the Modern Warfare series, considering it a legitimate style of play.

So, with Infinity Ward’s latest project, Call of Duty: Ghosts, on the horizon, players are once again asking, “can you quick-scope?” I tried to answer that very question in a recent Q&A video, in which I even attempt a little bit of “quick-scoping” myself, but those of us who have had the fortunate chance to get our hands on the game will agree that our time was very limited.

One of the areas that is getting lot of love in Call of Duty: Ghosts is the Sniper Rifle. By creating the Marksman class we were able to focus the Sniper class on really powerful high-caliber weapon systems. We feel, and many of the pro players who have played would agree, that sniping has never been better.

The changes we’ve made, like dual render scopes and increased damage really make snipers a great competitive class to use. We’ve also done a lot with map design (sight lines and cover) to ensure that all classes are viably effective. Both short range and long range classes will be effective on the same maps.

However in re-envisioning sniper rifles some aspects, such as sway timing, have changed the way sniper rifles function and so traditional ‘quick-scoping’ has been affected. Is it gone completely? Maybe. It certainly won’t be viable in the way it previously was. Can’t wait for you snipers out there to get your hands on these new sniper rifles and try them out for yourselves.

See you in game!
-Mark

So, there you have it. “Quick-scoping”, in the traditional sense, “…won’t be viable in the way it previously was,” in Call of Duty: Ghosts. What do you guys think about Rubin’s answer? Is it a play style you have adopted over the years and are very passionate about? Is it something you wish had no part in the game at all? Are you happy or sad to learn about its potential disappearance in Ghosts?

Let us know your thoughts!