Recent discoveries suggest DLC weaponry will be making its way to Call of Duty: Ghosts this year.

Mining through the game’s PC files, @syncohboyy stumbled on a few lines of code related to what looks like DLC-specific weapon attachment purchases. The files listed entries like “ch_dlcweap02 silencer_purchase” or “ch_dlcweap04 reflex_purchase”, indicating that future downloadable content may include up to a total of four additional weapons; one weapons per map pack. 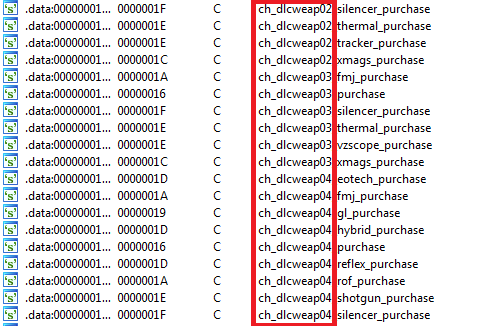 Only a few days ago, a similar discovery was made regarding possible DLC map names.

Previously, Call of Duty: Black Ops 2 introduced the idea of adding weaponry in their map packs, though it was only the case for the game’s first map pack, Revolution, which added the Peacekeeper sub-machine gun.

With regards to Modern Warfare 3, Infinity Ward Executive Producer mentioned earlier that weapon DLC was not possible due to memory limitations, but with the mandatory install required for all versions of Call of Duty: Ghosts, it would not be far fetched that developers allowed room for additional downloadable content this time around.

Lastly, with rival shooter Battlefield 4 offering both maps and weapons in their expansions, it would make sense that Call of Duty: Ghosts would want to stay competitive and offer similar content, if not more. But until an official unveiling of any future Ghosts DLC is made, we’ll have to consider this one speculation.

What do you think? Are you down for more weapons in Call of Duty: Ghosts. What sort of weapons would you like to see make an appearance or, perhaps, a return?