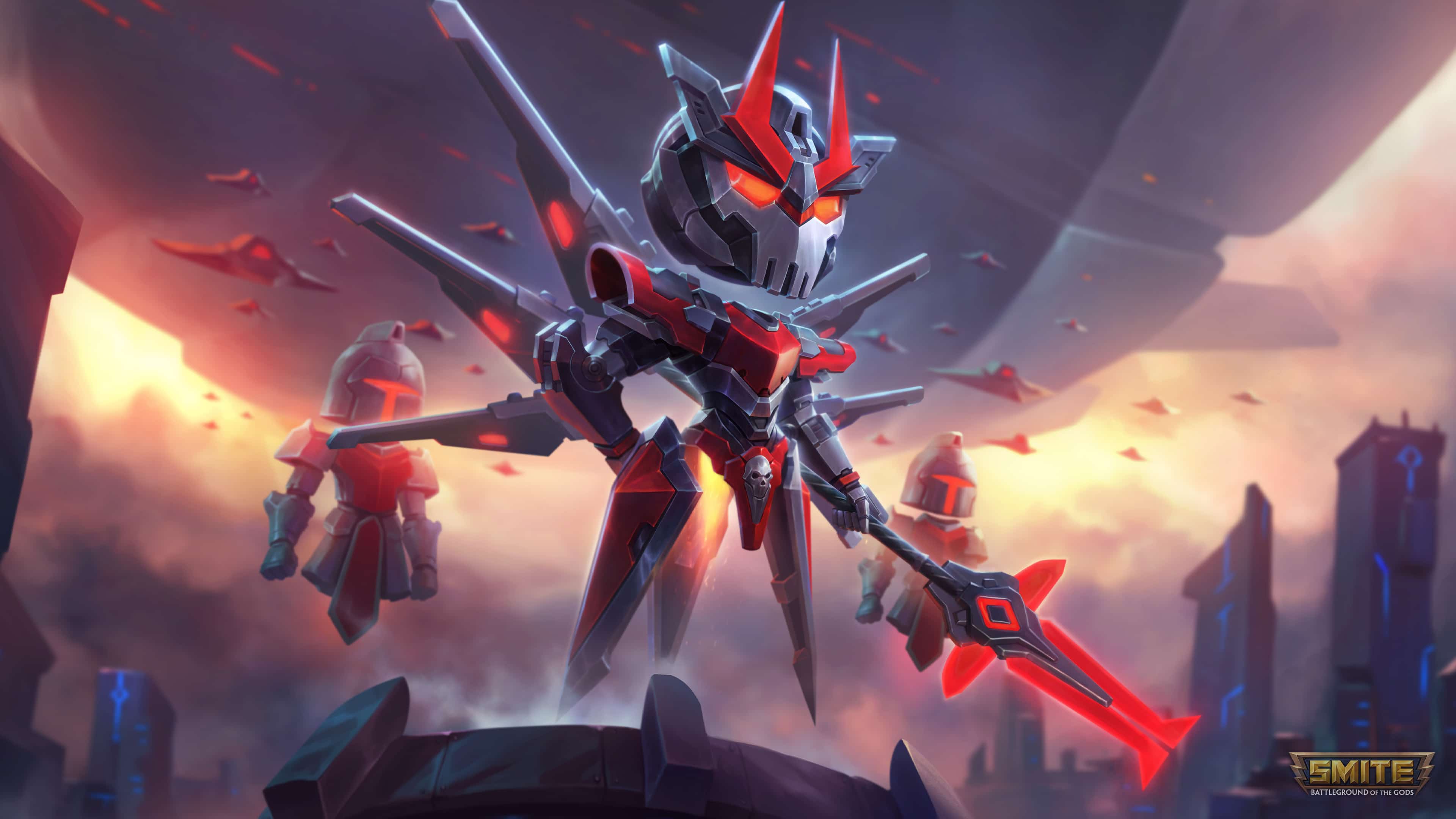 Hi-Rez has released the SMITE update 12.08 patch. which is called the “Heavenly Light” update version 9.3! This brings the Heavenly Light event, Chibi Bots Battle Pass and more! Read on for the SMITE March 22 patch notes.

SMITE BIRTHDAY EVENT
With Update 9.3 we are also super excited to be hosting an amazing SMITE Birthday Art Event! There will be a wide variety of prizes for participating in the event each day, including Boosters, Gems, and some amazing Community art Cosmetics!
BUG FIXES

GENERAL
Glyphs have had a big impact on SMITE across all modes and gods. These new special items seem to be generating a lot of excitement and people are eager to see more released. As we plan Glyphs for the future, most likely Mid-Season, we wanted to go ahead and implement this balance safety measure early. Each god will only be able to own one item in its Glyphed form at a time.

AMULET OF SILENCE
This Glyph boasted a powerful effect, but was often hard to apply. With this change it should be much more useful, ensuring that it silences an enemy god much more consistently.

THORNS OF OVERGROWTH
We are always careful with Thorns Relics, possibly in Season 9 we were a bit too careful and both versions seem to be on the lower end in both popularity and performance. We are boosting the radius of Thorns of Overgrowth to make increase the chances the additional effects are applied, while also increasing the duration of Thorns of Sapping Strength to give them both a much needed buff.

BRACER OF ILLUMINATION
Well we already used the “Wards Win Games” line, but it can’t hurt to say it again right? This Relic provides a very unique ward that can potentially gather a lot more vision than normal, but it does come at the cost of a Relic slot, so we are increasing its vision gaining abilities to help it compete.

BERSERKER’S SHIELD
A major feature of this SMITE update comes in the form of Berserker’s Shield being reworked, as well as a series of other Warrior Item balance changes. This shield is single handedly driving the meta in both the Jungle and the Solo lane. It has given life to a lot of new gods in solo, which is great, but it’s also keeping a lot of the same gods OP in the jungle and encouraging them to build tankier than we would like. Our goal with this rework is to move the item specifically toward the Solo Lane. It’s losing a lot of its aggressive states, specifically % Penetration and its passive, and instead picking up more elements of survivability.
Warriors and Assassins often benefit from the same items, but we are trying to make a more specific stat set between Jungle items and Solo items, with this patch focusing on a series of buffs toward the Solo Lane specifically. We will continue to keep a close eye on Junglers and we will continue to make changes to items and gods to encourage Assassins to play in that role, and to build into higher Power and Penetration builds when they do.

(STARTER) LEATHER COWL
Hunters are seeing a few small buffs, first with an increase in power to Leather Cowl. This item has become overshadowed by other starter options and it feels reasonable to match its power to them. It provides a very different effect than Death’s Toll, so even at comparable power the two should create different builds and be better on different gods.

QIN’S SAIS
This one is always a bit scary to buff, but we want to give Hunters a small edge toward tank shredding, and this is the primary item for that goal. We will start small with this item and then see where we need to go in future patches after the nerfs to Mages and shifts to Warriors hit the battleground.

JOTUNN’S FEROCITY
Of the two Glyphs on this tree, Vigor has shown itself to be the more powerful. Ferocity can provide some impressive stats but it’s also significantly harder to apply, so we are decreasing the cooldown considerably to ensure that

KATANA
Assassins get another buff through cost decreases across the Katana tree. The Tier 1 item has an especially hard time competing with Tier 1 Mace, so we are buffing its cost to help that. That cost increase will translate up the tree to the Tier 2 and a selection of Tier 3 items. Golden Blade is avoiding the cost buff because it is so cheap already, and Serrated edge is going unbuffed because of how strong and popular it already is. But the other Katanas will enjoy their new discounts.

JADE EMPEROR’S CROWN
This item was quickly and heavily changed in PTS to prevent Guardians from taking over the Solo Lane. This was successful, but the item seems to be left in a weaker spot than intended. We are buffing its Health and Passive to give it an extra boost in Support builds or specific counter-build scenarios.

ONI HUNTER’S GARB
This item provides a strong effect for getting into the fray with multiple opponents, but its base stats are a little lackluster. We are increasing the base health on this item to give it a nice little boost even when facing only 1 opponent.

HE BO
His lower body is made of water, so there’s no reason why He Bo couldn’t be more fluid in his movements. For years this god had been heavily limited by a self root which is pretty punishing for a high risk high reward god like He Bo. This should give him a lot more flexibility to poke and gank without actually upping his damage numbers.

POSEIDON
We have seen this god make a splash in a few different roles, with even attack speed and jungle Poseidon looking strong in Season 9. We are going very light on buffs with him and targeting only a few exceedingly high mana costs.

BARON SAMEDI
Similar to He Bo, Baron puts a lot of restrictions on himself. Especially during this Ultimate where he moves much slower. We are speeding him up as well as adding more damage per tick to make sure Baron can get the most out of his Ultimate.

LIFE OF THE PARTY

SERQET
We are trying something totally new with Serqet – a “Rebalance”! This Goddess is an Assassin, but has been played at the top levels of SMITE mostly as a Support (or as a full tank even in the Jungle). She is also relatively low in popularity and performance in all other skill levels. We wanted to do something big to her balance position, without changing the kit too much with the goal of making her a worse tank and a better burst Assassin. The result has been changes to damage across the entire kit, losing base damage on every ability and increasing scaling. There are also a few key targeted shifts in the kit, such as decreasing her leap range back to the game-wide standard, and giving her mitigations while ulting to make it less risky. We are looking forward to player feedback and the gameplay data on this unique initiative. Hopefully we can see Serqet be a potent Assassin in the Jungle again!

THOR
The God of Thunder has been especially quiet lately. A while back we introduced a new mechanic to his Ultimate where he becomes imbued with lightning and able to do more follow up and AoE damage after crashing down. We would like to see that mechanic become a more important part of his kit, so we are increasing the base damage and the range on these extra damage triggers. This should give Thor more ways to follow up after dunking down on his opponents.

CUPID
This cherubic little god has fallen off in favor of some new buffed hunters. He was a dominant force last season and received a few well needed nerfs, but in looking at his pressure and laning power it’s becoming clear that he could use some of that back. We are applying a small damage buff to Heart Bomb, reverting a nerf he had previously to make sure this core damaging ability can be effective

JING WEI
The new explosive damage on Jing Wei’s stimmed basic attacks was an exciting idea, but we didn’t see very strong results from it. At least not yet. We still like the idea of these attacks being more powerful, and having better synergy with Crit, so we are buffing the same number yet again.

XBALANQUE
Another non-traditional hunter gets a buff in this Update. Xbalanque, like Cupid and Jing Wei, focuses a lot on his basic attack damage. Poison Darts is his primary damaging ability but it has a lot of limitations, specifically being bodyblocked by minions. We are buffing its cooldown to give Xbalanque a better chance at hitting his opponents with a few darts.

YMIR
Ymir buffs are best buffs for patch notes. So fun to write. Ymir fall off too hard after last nerfs, so time for buffs. Ymir focus on CC mostly, so buff that. Ymir be better Support now… YMIR!

XING TIAN
The unstoppable god should live up to his name. Xing Tian likes to get into combat and stay there by sustaining himself through his HP5 passive, but another way he can boost his survivability is through hitting enemies with his leap to gain a protection buff. We want to draw more attention to this aspect of this ability, while also boosting Xing Tian’s tank stats.

CTHULHU
The dreamer has returned to his slumber and we are doing our best to wake him up. We have been careful to not provide tanks with much more damage, but this ability from Cthulhu is especially close range and requires a lot of management on his passive to get the most out of it. This buff should help his lane phase considerably.

CU CHULAINN
Last but not least is the Rage driven warrior himself, Cu Chulainn. Bluestone meta has returned with no appearances from this god, which proved he was safe to buff. We were careful to buff his survivability and mobility, and not his damage output which can be especially punishing at early levels.