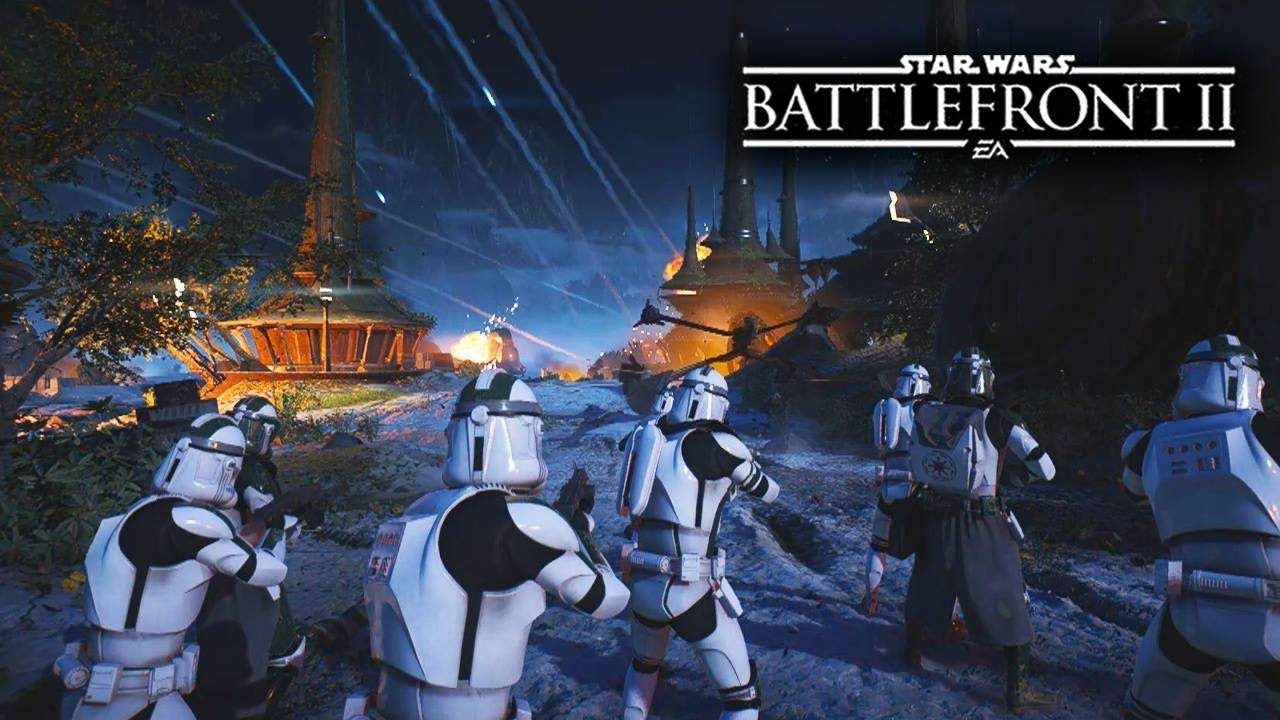 Check out the image first, and then read up on the full details straight for the Star Wars Battlefront 2 2019 roadmpa update from DICE! 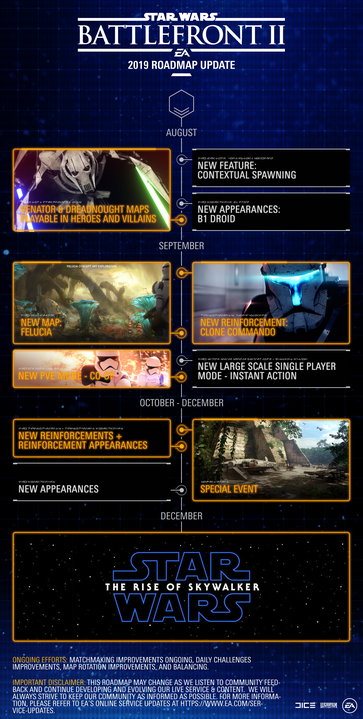 August kicks off with both the Separatist Dreadnought and Republic Venator becoming playable in Heroes vs Villains. Since the release of Capital Supremacy this addition has been highly requested, and we’re incredibly happy to be adding them to our rotation.

We’ve taken areas within both capital ships and turned them into playable locations that we believe will be great for the small-scale Hero gameplay.

After watching discussions around Capital Supremacy and, in particular, the Capital Ship phase. We’ve made some changes to the interiors of both Capital Ships.

The assault on the Capital Ship will continue to have two sub-phases, but both are evolving.

Once you’re breached the enemy ship, you have five minutes to destroy it before the action returns to the ground. In order to destroy the ship, you must first capture one of two available Command Posts located on the ship. If you succeed in that, your team will gain an additional five minutes and be able to fire on the enemy target.

Any damage caused to the enemy target will be persistent, meaning even if you fail in destroying the target fully, you can pick up right where you left off in subsequent Assault attempts.

Next, we’re changing the Capital Ship phases to be based on a timer. This means that the attacking team will now have a five minute window to destroy the generators. Once the time runs out, the battle will return to the planetary phase.

We are also implementing some new changes to the artwork within the ships themselves.

We’re incredibly happy with the way Capital Supremacy is going and these changes will continue to be something we evaluate and monitor over time.

Following the trend of making updates to Capital Supremacy, we’re bringing a much requested, and beloved, feature into the game, Through our new Contextual Spawning system you will be able to spawn on dynamic tactical assets on the battlefront, starting with Command Posts in Capital Supremacy and Instant Action.

Once you have been defeated in battle you will be presented the Squad Spawn menu as normal. Alongside your Squad members, you will now be presented with a list of Command Posts to spawn onto as well.

You will have the ability to spawn onto any Command Posts that your team has currently captured, even if it is being contested.

You can spawn on any Command Posts:

You will not be able to spawn on a Command Post if:

Over the last few months we’ve released a number of appearances for Clone Troopers, across a variety of legions. So the Separatists don’t feel left out, we’re bringing three new appearances for the B1 Battle Droids this month. Each of the below appearances will be for all four Trooper classes: Assault, Heavy, Officer, and Specialist.

When fighting in jungles and dense forest environments, some tacticians apply camouflage to their detachments of battle droids in order to minimize the chances of detection.

Inside the secret cloning facilities on Kamino, cadets spar against training droids in simulated battle scenarios.

The Battle Droids will also have the default and Geonosis based appearances. Both of which will be free to everyone and selectable should you so wish.

The August update is scheduled for deployment on August 28, and we’ll be back with the full release notes next week.

That covers’ August. What about September?

September is shaping up to be a great month. We have a new large scale map, two new ways to play, a new reinforcement, and a Community Challenge for one of the most requested appearances to date. We’re still a month away from release, but we’re currently targeting a deployment date of September 25.

Here is what we have planned for September.

The Separatists’ invasion of Felucia is nearing its end. With only a single, powerful vehicle left to cover the evacuation of a Felucian farming community, the clones struggle to maintain their last line of defense long enough for Republic transports to collect a large cache of valuable medicinal plants from the village.

As the droids advance towards the clones’ position, the squad chooses to go on the offense, destroying the dreadnought responsible for the attack. However, the droids have a plan of their own: Ensure the Republic can’t escape with the plants by bringing down their Venator.

Similar to other Capital Supremacy maps, Felucia is broken up into multiple areas with a set theme for each Command Post. Themes range from the traditional Felucian farm, a cave that used to be inhabited by an indigenous Rancor or the remnants of the mighty Sarlacc.

Felucia has been built from the ground up with Capital Supremacy in mind and is shaping up to be one of the best-looking planets we’ve built to date (if we may say so ourselves), and while we’ve been having a ton of fun during our internal playtests on it, we’re eagerly awaiting your arrival.

In September, four player online co-op is coming to Battlefront. For this experience, you will team up with three other players (old friends or new) for a large scale PvE adventure. You can choose to play as either the Galactic Republic or the Separatist Alliance and partake in massive battles on all five Clone Wars planets in Battlefront II. Depending on what faction you’ve selected, the experience on each planet will be different. For example, the Droid Army will be invading the planet of Naboo, while defending if the battle moves to Geonosis. If you decide to play as the Clone Army of the Republic, the roles will be reversed on each planet.

We will be inviting some fan favorite YouTuber Creators to try out Co-Op directly from gamescom, so be sure to keep an eye on their channels.

We’re happy to announce that Instant Action is making its return to the Battlefront franchise, and we think it’s something a number of you are really going to like. Each month, we’ve seen the comments about a large-scale game mode that can be enjoyed within a singleplayer environment. We know that solo players matter and can confirm it’s real and it’s arriving in September!

In this mode, both teams are fighting over five Command Posts (similar to Capital Supremacy). Hold a majority of them until your team score reaches 100% to win the game.

At release, you will have access to all the maps that are currently available within Capital Supremacy; Naboo, Kamino, Kashyyyk, Geonosis and Felucia.

As one of the most elite forces within the Grand Army of the Republic, the Clone Commandos would come to be respected by allies and feared by enemies. With conflict raging across the galaxy, the Republic organized the Commandos into squads who quickly became a pivotal resource in the ongoing war effort against the Separatists.

The ability to switch from blaster to grenade provide the Clone Commando with a great deal of versatility, allowing him to adapt to the situation ahead of him. We’ve been waiting for this moment for a while now and the arrival of the Clone Commando is almost upon us. We think you’re going to absolutely love playing as them.

For added cool factor you’ll also see your Commando making the change from primary fire to grenade himself. In addition, we’ve added all the necessary animations to ensure we stay as close to the source material as possible.

Left Ability: Anti-Armor Attachment
Reconfigures the DC-17m into a grenade launcher that fires up to three small grenades, with high efficiency against vehicles and shields.

Right Ability: Repulsor Blast
Discharges a short-range shockwave that temporarily disorients enemies and knocks them back.

Middle Ability: Battle Focus
Activates a damage protection aura for the Commando and nearby allies. Additionally, any damage the Commando deals to enemies replenishes his base health.

During September we’re releasing a community challenge that grants you the ability to unlock a highly requested appearance.

More details will follow closer to the challenge, but we have a sneaking suspicion that fans of Luke Skywalker and Star Wars: A New Hope will enjoy this one.

We’ll be back in September with a number of transmissions dedicated to Co-Op, Instant Action, the Republic Commando and the full release notes themselves. Be sure to keep an eye out for all of them.

So that’s August and September, what about later in the year?

As we move through the remainder of the year, we will have new reinforcements, appearances, and a brand-new front menu system which allows you to play the era of your choosing.

We will also be working toward the release of content inspired by Star Wars: The Rise of Skywalker.

While we don’t want to go into the exact specifics (no spoilers!), we can confirm that we will be building a new planet and some new reinforcements based on the conclusion to the galaxy-spanning Skywalker Saga.

We’ll be back with more details on each of the above as we get closer to their release.

The next few months are an exciting time for the game and we’re incredibly grateful that you’ve chosen to come on this journey with us. We can’t wait to experience more of Star Wars Battlefront II with you!

I don’t know about you, but that’s a LOT of stuff for a relatively old game. Once the update is out for August, we’ll let our readers know.