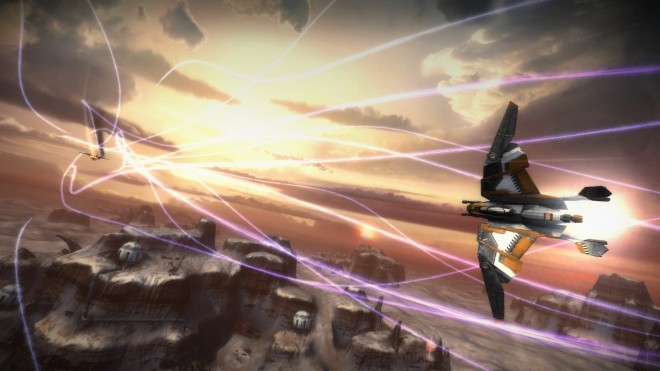 Today, Lightbox Interactive released the first balancing patch for its third person build and battle title, Starhawk. The patch is aimed to fix many issues such as weapon respawns and damage.
The following items have been tweaked:

Notes as listed on the official Starhawk Blog:

In the last game balance update we made a significant improvement to the combat effectiveness of the homing missile which was something that our player community was really wanting — but we feel we didn’t go far enough! So this update makes the Homing Missile approximately 50% harder to dodge.

What this really means to our hard-core Hawk pilots is that you’re now filling up your evasion bar at a slower rate when you’re dodging. You still need a full evasion bar to dodge a Homing Missile but it will be harder to achieve a full evasion bar. This also resulted in us scaling the evasion required for the Swarm Laser accordingly so that it still requires the same amount of evasion “effort” to dodge as it did prior to this update.

We have been aggressively tracking “base-ravaging” as an issue that we’ll always continue to try and reduce. To help achieve this goal, we have increased the amount of “spawn-able” area for your home-base in both Capture the Flag and Team Deathmatch.

The reason for doing this is to help provide players that are respawning into their home base with more options and distance between any attacking enemy players. This now makes it more difficult for an attacking force to keep a team pinned in their home-base due to the increased surface area the attackers need to cover to induce”base-ravaging”.

This weapon was very over-powered and our fans agreed. This update includes a significant set of changes to the weapon’s attributes. It rate-of-fire was reduced by 250ms and the damage it deals against Hawks has been cut more than in half. The respawn delay for the Flak Cannon pick-up was also increased from 30 seconds to 60 seconds.

These are some pretty massive changes but based on player feedback, our own internal review and play-testing *AND* our combat analytics, a massive change was warranted.

There were some really degenerate situations occurring where players could essentially be come “grenade-turret” by staying in a bunker and continually throwing grenades — never running out of them because the pick-up respawned so quickly. This drove us to change the number of grenades you get per ammo pick-up from 3 down to 1 as well as increase the respawn delay of the pick-up from 1 second to 5 seconds.

The Light Box Interactive team is also looking into a potential issue with the “Swarm Lasers” where the scrub factors are not working, unexpectadly caused by the update to the Homing Missile. In other words, the LBI team is working dilligently and fast to address. We will keep you posted on a hot fix. We are fully aware!