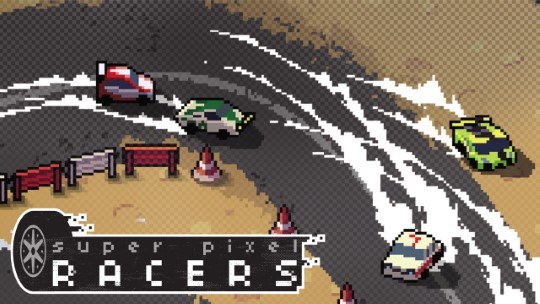 Racing games are a dime a dozen these days, right? But what if a new racing game was announced that had a top-down-perspective (a la Rock ‘n’ Roll Racing), and had 2D pixel graphics? Yeah, that’s a reality, thanks to Super Pixel Racer.

In development for the PS4 and Xbox One by PQube Games, Super Pixel Racer is a 16-bit racing game that offers online and local co-op! Check out the announcement trailer!

Thirteen challenging tracks and a range of unpredictable weather conditions put your drifting skills to the test. Meanwhile ruthless opponents look to check your progress at every turn – or better still – end your race altogether. Rise to the top in the single-player career mode, take on up to 4 friends in local multiplayer, or leave challengers from around the world in the dust with online multiplayer support for up to 8 players.

Super Pixel Racer will race out this October 31 on the PS4 and Xbox One. What do you think of it so far? Old school gamers like me might be in for a treat come October 31. Do you want to see us review it?