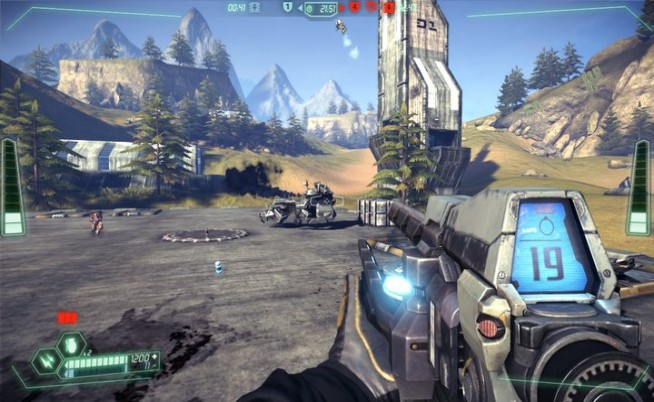 Remember Starsiege: Tribes? If not, you may not be an “Old” gamer like me. (Hey, don’t call me grandpa yet, I’m only 30.) Well, Tribes was a game that came out in the late 90’s that featured futuristic battles of capture the flag. You could choose a class and duke it out with laser rifles and guns that fired exploding discs among other things.

The closed beta for Tribes: Ascend is starting today and you can gain access by pre-ordering. By pre-ordering, you gain access to the closed beta as well as the game. You will also get 3,000 gold (which is used to purchase items in-game), a 30-day booster (which adds temporary stat boosts) and lifetime VIP status (priority login, access to exclusive servers, and will earn Tokens and Experience faster inside the game, allowing them to unlock items faster).

Tribes: Ascend is the latest addition to the series being developed by Hi-Rez studios that will be a free to play multiplayer only FPS due out some time in 2012. Following the trend of other free to play games, Tribes: Ascend will feature a free to play system that includes purchasing upgrades for your soldier with real money, similar to League of Legends. While there is not much info on the game yet, I believe you can also gain in-game currency that will allow you to purchase the items that you could with real money. Just like you can in League of Legends.

Players will start the game with one “loadout” which is your class within the game. The starting class is the medium armored “Soldier” which comes with several weapons; The Spinfusor, Engergy Pistol, Grenade and Energy Pack. You can purchase additional classes or earn them through playing the game, which will take a while longer I assume. Players receive credits after doing certain gameplay tasks such as killing an enemy or capturing a flag, which are then used to buy vehicles, turrets and other base assets. You can also purchase “Boosters” to allow you to gain credits faster.

With vehicles, futuristic weapons, aerial combat in the form of jetpacks and “Ski jumping”, RPG elements like upgrading your classes with different perks and skills, this may be another game to keep an eye on. Especially if you are an “old school” gamer like myself and remember the good times with the original Tribes games.

You can keep an eye on Tribes: Ascend by visiting their official site here.