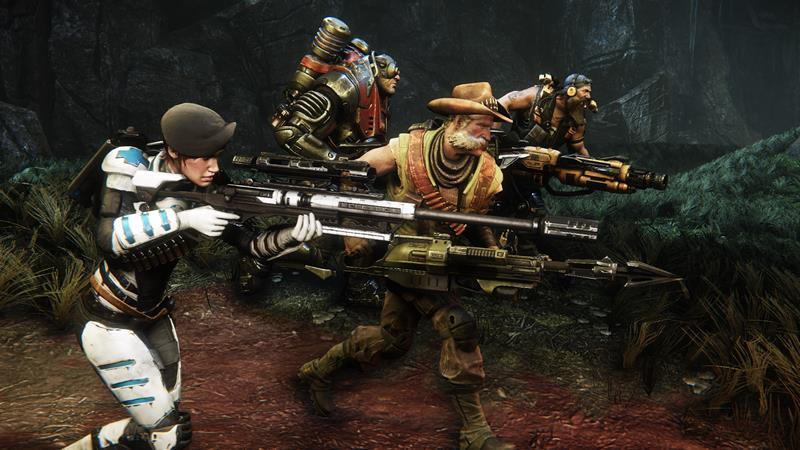 When asked about his thoughts on online-only titles like Titanfall, Ashton told VG247 that Turtle Rock has “got a couple of different ways to play the game with more or less narrative woven into it.” He touched specifically on Evolve’s story and how it’s woven into character dialogue.

“What we’ve shown people so far was ‘let’s just play rounds on this one map,’ but at the end of the day there’s a reason why you’re there and an objective the monster’s trying to destroy,” he said. “The characters will banter about that objective while they’re in the world, so you’ll learn some fiction through them, and that’s very much the way our Left 4 Dead story was told. You get to hear them talk about the world while they’re in it.”

He also hinted at some other experiences that the studio is still keeping under wraps.

“That stuff’s there to tell it through the characters, and there’s some little-longer experiences that we haven’t really talked much about yet, where we have the opportunity to do a little bit more. Hopefully we’ll be able to dive in soon, but at a minimum no matter what more – if you’re just playing a skirmish or Hunt all day on different maps – you’re going to still learn about the characters, the setting, why you’re there, why the monsters are trying to destroy objectives. That sort of thing.”

Turtle Rock hopes to cater to those who enjoy offline experiences as well, however. Ashton explained that players will have the chance to try out newly unlocked characters in a more private setting before heading off into Evolve’s asymmetrical multiplayer experience.

“For us there’s so many different characters, monsters and strategies that one thing we wanted to do was to make sure that – say you unlock a new character – maybe you’re totally fine and confident and you’re going to just jump into multiplayer and try them for the first time, but suppose you want to learn about them and practice a little bit before you dive into the online space. That’s one thing where an offline or single-player component becomes important to us,” he said.

“I do the same thing personally with stuff. StarCraft is a good example where I’m going to play skirmishes against the AI so I can figure the tech trees out, learn some basic strategies and do that stuff before I go online. Maybe that’s just me, I don’t know if a lot of people do that or not, but it seems like a process that makes sense so we’re catering to that.”

As for online matches, Ashton ensured that, while it’s still a bit early, the team is working on keeping things as smooth as possible by including AI in public matchmaking when players leave.

“It’s still a little bit early. We’re still working that stuff out, but right now for sure AI will take over, and then depending on how you match-made into the game or what kind of mode it is, we’ll be able to match other people back into your game, he explained. “In some modes you’ll have control of that. If you’re playing friends-only then obviously it’s up to you to invite someone else, so we’re investigating a lot of options.”

“Having the AI be able to take over offers us some flexibility,” he continued. “If you’re playing against a monster player, suppose his internet connection goes down or he yanks the cable out of the wall or something, we want to give him the opportunity to get his machine back online and get back into the game. So the AI will continue to play and do the best it can in your stead, and we want to hold that slot for a certain amount of time for that guy to come back.

In the end, Evolve sounds like an eclectic mix of PvE, PvP, single player, and multiplayer experiences all wrapped up into one shooter.