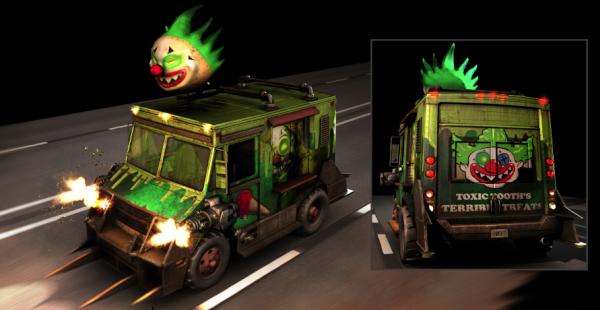 Last week, David confirmed that Twisted Metal would support full user generated multiplayer skins. Though not much was detailed, David Jaffe has stated that any painting or art program can be used to create your own skins. From here you can then upload it via the official website, and other Twisted Metal players will be able to download the skins. Players can also make exclusive clan skins that only members of their clan will be able to use. On the subject of character customization. David Jaffe also confirmed that their would not be any custom skin for the characters. He states ” just didn’t have the time,” and that “vehicles made most sense”.

He stated that more details on the customization will “come very soon.”

Down below is just a sneak peek of what to expect from the from the skin customization tools. Images are caption with Jaffe’s comments on Twitter.