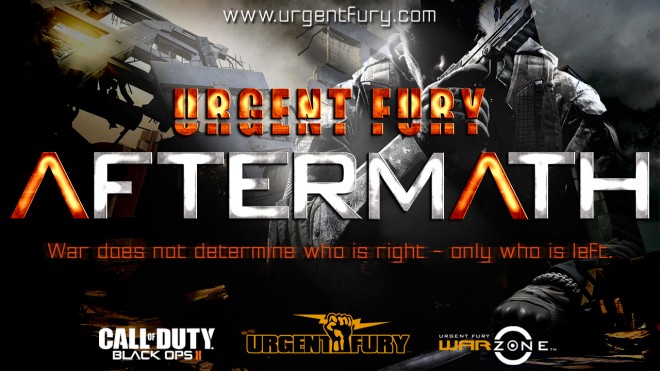 Are you a PS3 player currently enjoying Call of Duty: Black Ops 2? Ever thought of playing competitively, but in a fun, cheat-free and respectful environment? Urgent Fury’s Aftermath League might be for you.

“Aftermath is a Call of Duty Black Ops 2® tournament league designed to give teams an enhanced experience competing online in a cheat free and respectful environment. Each team will battle it out online in six versus six matches, preparing their teams for an upcoming Scenario Based TacMap Tournament to be held later this winter. Prizes and additional sponsors will be announced at a later date.”

As mentioned, the competition leads up to an invite-only, Scenario-Based TacMap Tournament where teams will compete for multiple weeks attacking and defending various territories on a designated map, much like the board game Risk, beginning in February 2013.

In order to be eligible to enter the tournament, a team must compete in at least one monthly Aftermath event. Urgent Fury explains, “each match will have scheduled maps and modes assigned so that players can experience the variety of features offered by the Black Ops 2® online multiplayer environment. These matches are played at 9 pm central standard time on select weeknights. Schedules and Additional information can be found on the tournament at www.urgentfury.com.”

You’ll be able to catch the action live on the official Twitch.tv Channel where one or two matches will be broadcasted each night with commentary by CM and CIO of Urgent Fury, Shane Bell. They will be utilizing Black Ops 2’s built-in eSports features like CoDCasting in order to provide an entertaining and informative experience.