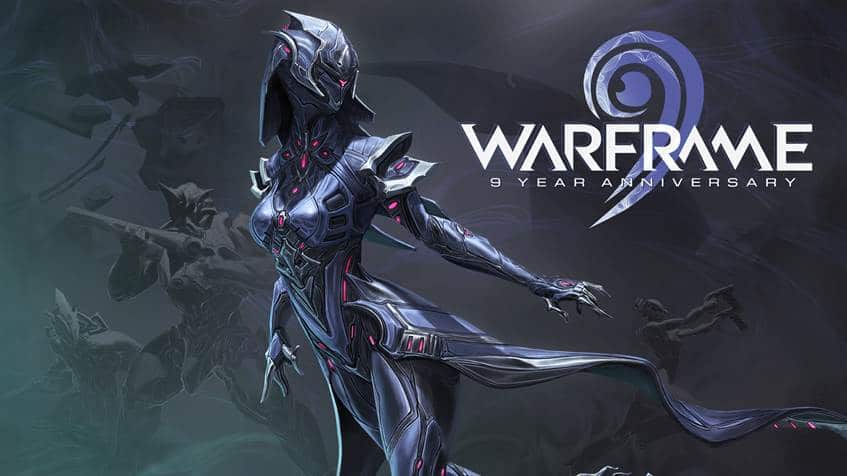 The Warframe 9 Year Anniversary celebration officially kicks off today, and Digital Extremes released the rundown of all the gifts and rewards players can get from the five weeks of festivities. Check out what you can get as weekly gifts below, as well as details on Garuda Prime as she makes her way back to Warframe Prime Access.

Here are the weekly gifts coming to the Warframe 9 Year Anniversary:

Warframe wouldn’t exist without its dedicated players and Digital Extremes is giving back to its fans with an ultimate ‘thank you’ in the form of weekly premium gifts. To start, all Warframe players will receive a free Wisp Dex Skin gifted via an in-game Inbox Message that players can find in their Orbiter today. A visual of the Wisp Dex Skin is featured in Warframe’s Anniversary key art designed by freelance artist Kevin Glint. Throughout the next five weeks, players will be treated to even more free premium content with weekly Alerts delivered to players providing access to Weapon Slots, Armor, Glyphs, and more. Weekend Credit and Affinity Boosters will also be available for players to maximize their return while playing Warframe.

As for Garuda Prime, here are the details for those looking to snag her in Prime Access:

Awash in crimson and signature shimmering gold, the powered-up Prime variant of Warframe Garuda, Garuda Prime, vanquishes her prey using coldblooded elegance. Players can tear through the battlefield with razor-sharp talons today by instantly unlocking or earning this bloodthirsty Prime Warframe, along with her Signature Weapons and Customizations, for a limited time only before she vanishes into the Warframe Prime Vault.

Nagantaka Prime: A golden version of Garuda’s versatile crossbow, as fashioned by the Orokin’s finest weaponsmiths. Alt-fire to let loose a barrage of bolts. All bolts have a chance to cause Bleeding, and Headshots have a chance to increase Reload Speed. When wielded by Garuda or Garuda Prime the Nagantaka gains a slight Punch Through effect.

In case you missed it, here are the latest complete patch notes on the last Warframe update, released for a small hotfix across platforms.

One Piece Odyssey Officially Announced, Being Made by Pokemon Diamond & Pearl Devs