A couple of weeks ago, Infinity Ward took to Facebook asking for feedback on whether a double weapon XP event would interest Modern Warfare 3 players. Shortly after, the first double weapon XP  event was announced.

The interesting thing about the Facebook tease was the image Infinity Ward picked to go along with the message. The image includes the AK-74u, as you can see below, from Modern Warfare 3’s single player. 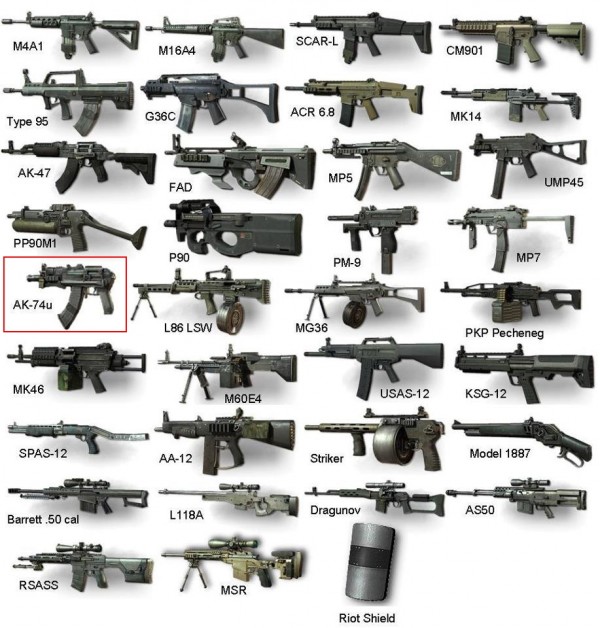 This prompted many fans, including our forums, to predict that the weapon would be making its way to MW3’s multiplayer. Also, let’s not forget, former creative strategist Robert Bowling did tease about weapons DLC in January and March.

Infinity Ward’s Executive Producer Mark Rubin, who’s been rather chatty lately, clarified that the AK-74u will not become available in Modern Warfare 3’s multiplayer. It was a “rumor that started when Tina Palacios posted a pic of all the weapons from MW3,” Rubin confirmed via Twitter.

As for the lack of weapon DLC in general, Mark Rubin explained that “the main issue is RAM. All of the weapons, characters, models, textures, and geo have to live in RAM. There is only 512 [MB] on the consoles. The problem then is adding weapons adds memory, and there isn’t much or any left.”

This led fans to wonder why Modern Warfare isn’t able to do weapon DLC when DICE’s Battlefield 3 has seen 20 weapons released in DLC form thus far. Rubin stated, “[it] just means their [Battlefield’s] maps, character models, weapon models, etc are smaller. We both have the exact same amount of available RAM.”

“Not everyone wants new weapons. But for those that do. I’d rather not put it in DLC. I’d rather give them away for free,” Mark Rubin assured.

With all that being said, Rubin left the door open a crack for weapon DLC when he stated, “I would love to [introduce new weapons]. Seriously. I’m going to be review the roadmap for MW3 during the next few weeks. We’ll look into it. I just didn’t want to set unreasonably expectations for anyone. I’m trying to be as upfront and honest as I can.”

“I don’t think we can do Gun DLC, but I want to look at the possibility but I don’t have high hopes for it.” He added, “I would love to do Gun DLC, and we will look at what it would take, but I think the tech issues are too high. We’ll see,” he concluded.

If the folks at Infinity Ward manage to find a way around the RAM issues, what guns would you like to see added to Modern Warfare 3?

Rockstar to Banish Max Payne 3 Cheaters to the “Cheaters Pool”