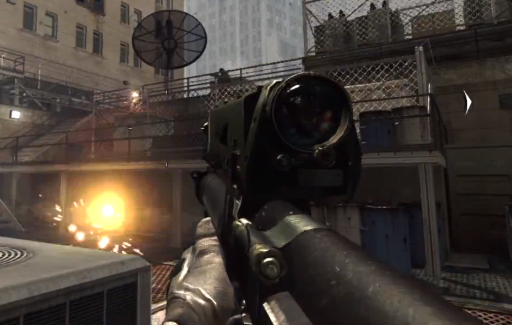 Grenade launchers, aka noob tubes, in Modern Warfare 2 almost broke the game, and Infinity Ward is not going to let this happen again. And, even some would argue it broke the game for them.

Perks with a potential for misuse, such as One Man Army, are not coming back in Modern Warfare 3, but after fans saw the XM25 in action (see image above), they feared having to deal with another overpowered grenade launcher in MW3. However, don’t fret, Robert Bowling assures that “It [XM-25] is not very powerful, has to be aimed and programmed and then only explodes at that distance.” Here’s an image of the XM-25 being aimed and programmed.

(You can find MW3 gun lists at the bottom of the article.)

If you’ve played the previous Modern Warfare games, you remember that you needed to get a certain number of headshots to progressively unlock different camos for your guns. This system in my opinion worked in terms of helping players hone their aiming skills, but it was kind of cumbersome to do that with ever weapon. In the next installment in the Modern Warfare franchise, “No, [MW3 won’t feature them, but instead] camos are unlocked normally by ranking up the weapon”  according to Robert Bowling, MW3’s Creative Strategist.

If you’re looking forward to Modern Warfare 3, you should probably take a look at:

BF3 – More Info on Recon Class and Last Stand/Man Down