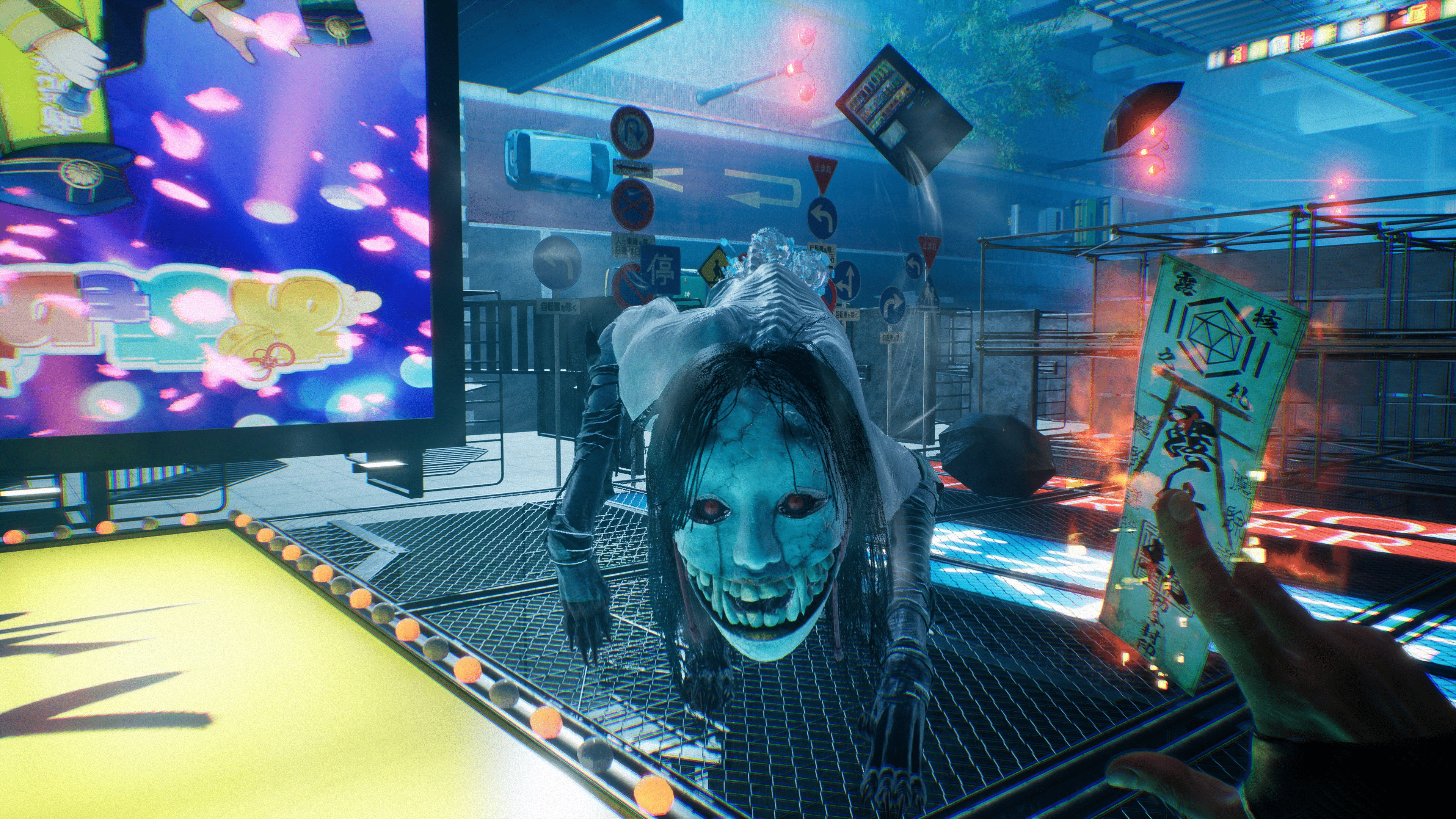 We’re just a short ten days away from the release of Ghostwire: Tokyo, and while many still have questions surrounding this mysterious new title from the Evil Within developer, Tango Games, we here at MP1st have been given an opportunity to go hands-on with the final release build! Although we aren’t quite ready to tell you our final thoughts (that’ll come in the review), what we are ready to share with you is our experience from the opening act. Same with our other previews, we’re here to relay everything we know about Ghostwire Tokyo all in an easy to digest forma providing you with a ton of factual details. and sprinkled with our own opinion based on what we played.

(Editor’s Note – This impression piece and all the details contained in it are solely based on the very first two chapters available in Ghostwire: Tokyo. A full review will be available shortly before launch).

To avoid spoilers, we will only discuss very light story details, most of which is already publicly known, as well as the general flow of the first two chapters and how side missions come into play. 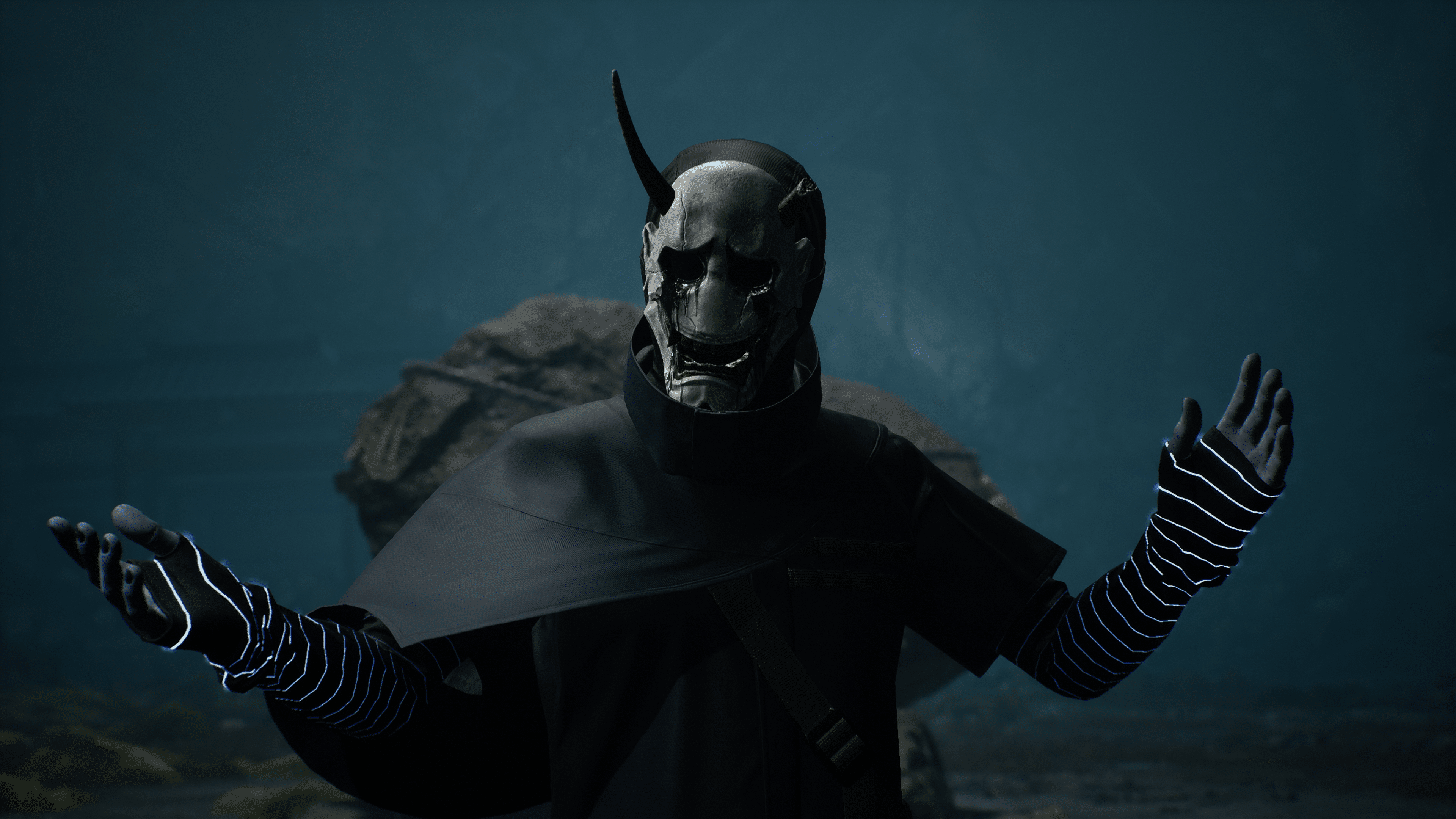 You know, going into this, I didn’t exactly know what to expect from Ghostwire: Tokyo. This seems to be the general consensus among many who have seen the countless trailers, and snippets of gameplay out there, which honestly isn’t much of a surprise considering how secretive Tango Gameworks has been on the title. Well, those curtains have finally started rolling back, and after spending a good few hours with the game’s first two chapters, I finally have a perspective as to what kind of game Ghostwire: Tokyo is.

For starters, for those going into this and expecting the same level of fear-inducing factor that Tango gave with their other IP, the Evil Within, I’d temper those expectations — a lot. Ghostwire: Tokyo is by no means meant to be scary, as evident from its reimagining of Tokyo Japan. No, instead what players should be expecting is something closer to say Alan Wake, Quantum Break, heck, even a series like Shenmue, and Yakuza. Games capable of embalming the players in a shroud of mystery — the kind that you really want to unravel.

That kind of grab is certainly one that Tango Gameworks has achieved with Ghostwire: Tokyo, as I found myself hooked to the mystery of the campaign. However, what piqued my interest even more wasn’t so much the main quest, but the side missions. That, and how the studio has been able to make them interesting, in not just their stories, but presentation.

For example, one mission I discovered early on saw us confronting a specter that took over a home. Entering, we saw whatever was inhabiting the place had amassed large clusters of junk. It was a den of a hoarder, and the local residents took notice of this. To help exaggerate this even more, the area seemed to have transformed as you shuffled through the mess.

What was essentially just an apartment room, turned into a maze filled with disorganization to further push the behavior of the hoarder spirit. We eventually located this spirit, who, unlike the other spirits that were a calming blue color, this one was a rage filled spirit with corruptions of red and black seeping out of them. It ended up transporting us to another world that also manifested in this specter’s ill behavior as random trash filled the field. A battle against other spirits ensued, which eventually led to us performing an exorcism, resulting in the neighboring spirits finally feeling at peace and free. 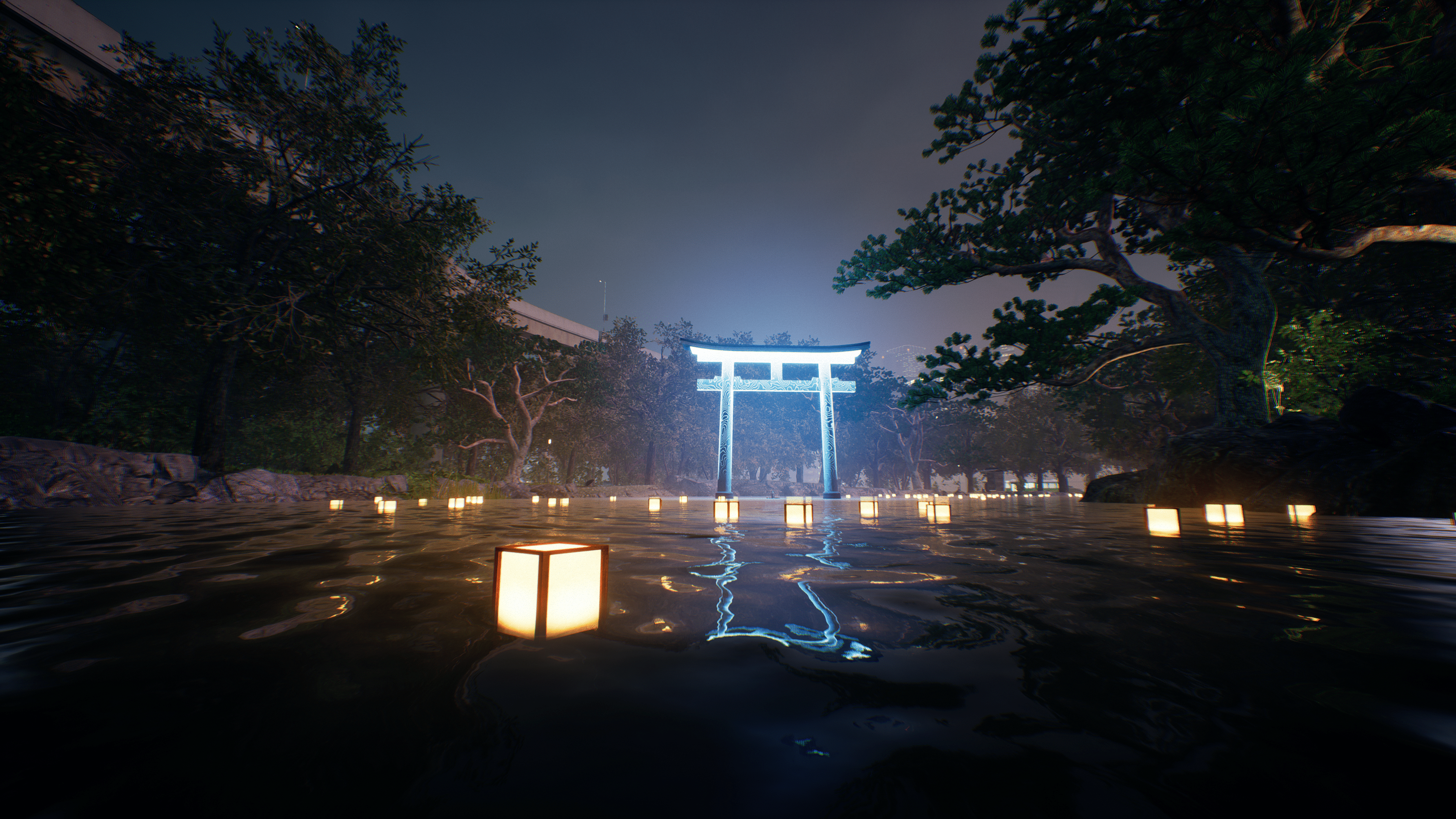 It was definitely a journey to play through, and a lot of early missions seem to have capitalized on moments like those. I’ve encountered plenty of other surprises during my playthrough that I’m sure that many will enjoy to experience.

Of course, that all wouldn’t really work out if the gameplay itself wasn’t any fun, and thankfully, that does seem to be the case. Known as Ethereal Weaving, players will see themselves in possession of a variety of supernatural abilities. I’ve mentioned above that these core powers stem from wind, fire, and water elements, and as the name suggests, the character performs these attacks by weaving with their hands. It’s stylish to witness as strings of energy are formed out of thin air, tangling enemies and obliterating them into a beautiful disintegration of particles.

It’s great to watch, and the sheer joy of hitting an enemy with a blast of energy feels great. Furthermore, additional weaponry such as a talisman throw in some variety in the gameplay as they allowed us to place down stun traps, decoys, and more. These were limited in use, and unlike weaving powers these were more of the one-time use kind of items that require replenishing via shops. Either way, they were a blast to use, and mixing them with the different weaving powers made the combat even more fun. 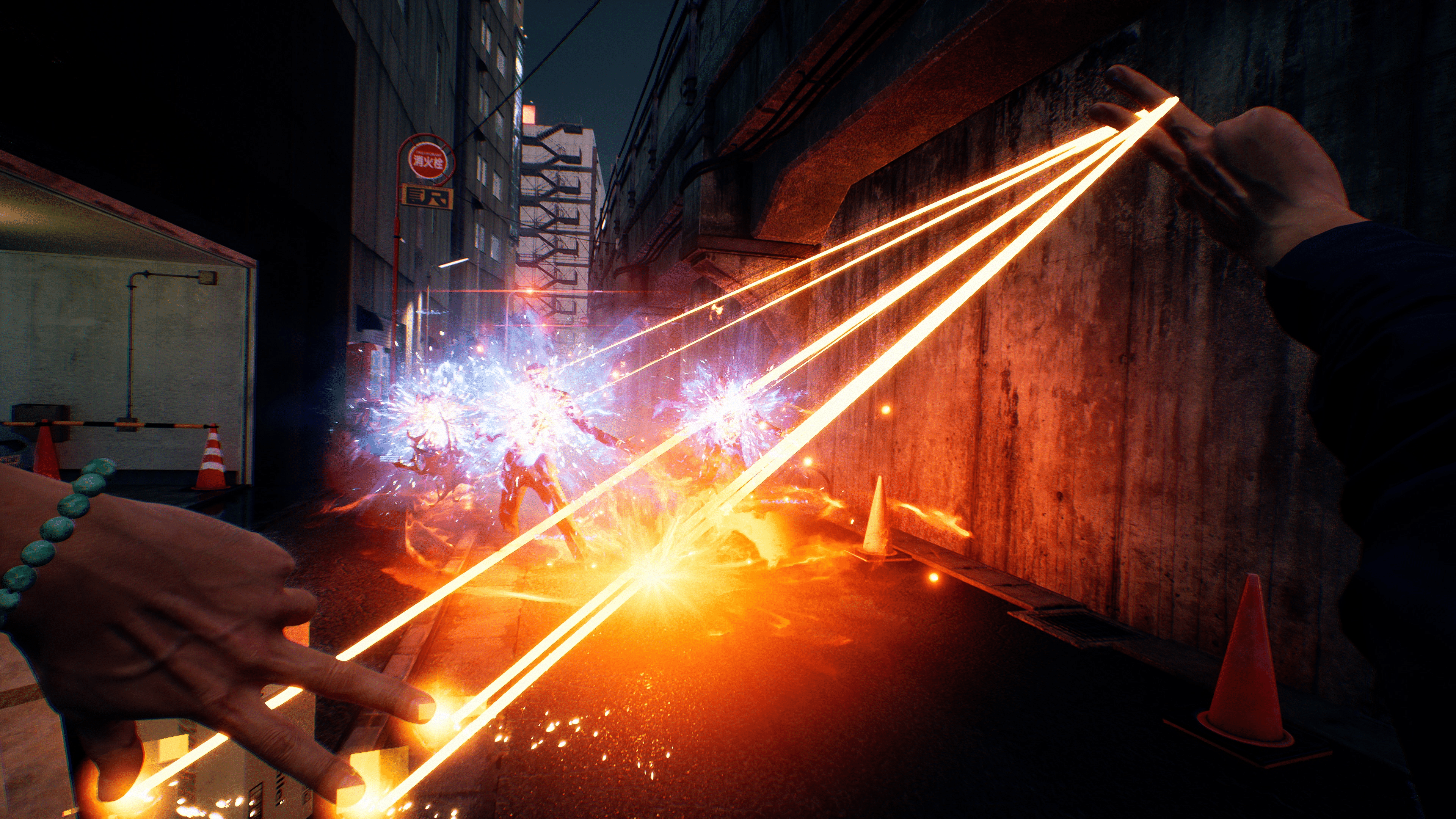 Now I will point out, as an initial concern from all the gameplay shown off and our last preview, I was worried that enemies would simply run into the character’s attacks. This does seem to be the case in some situations, though more so with the low grunts. Higher ranking enemies will go out their way to try and dodge attacks, and even flank you as an overwhelming amount of enemies begin to surround you. I’ve died quite a few times in the opening chapters because I poorly underestimated them. There are definitely some surprises in how a Yokai reacts to the player themselves that hopefully gets deeper in the later portion of the game.

There is a lot more to talk about, but I’ll save the rest for my final review. I will say that Tango Gameworks brings a lot of new stuff to the table with Ghostwire: Tokyo, though it remains to be seen just how well those mechanics work out in the later portions of the game. I’ve been impressed by the gameplay and how densely crafted the world of Ghostwire: Tokyo appears to be in it’s lore, and truly love the new direction of “horror” that the studio is taking. It may not seek to produce shock value with gore and violence like The Evil Within did, but it is an interesting, and might I say fresh idea that may prove to have quite a payoff in the end. Here’s hoping the rest of my playthrough is as positive as the early portions of the game.