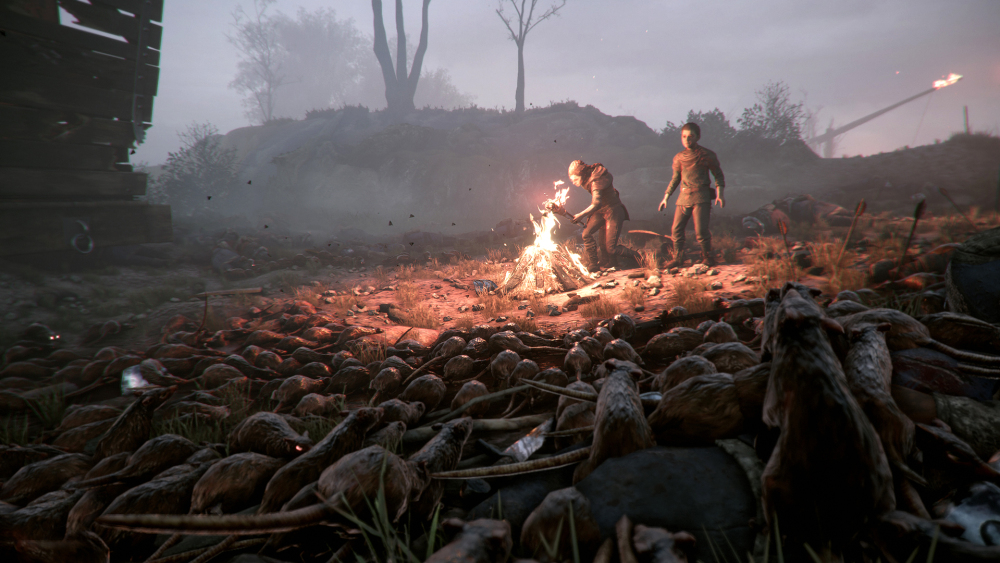 When it comes to games that are far more narrative driven, I usually break them down into two style types: Ones that offers a really guided experience with very little effort of input aside from character guidance and interaction, where the story is key and there is little room for failure; the other is something more akin to the Uncharted franchise, or The Order 1886, which is still guided, yet with perhaps a more solid foundation of more in depth game play mechanics whether that be stealth, action or platforming. Of course there is a fine line between both styles, I think I’ve finally played a game that combines the two perfectly. A Plague Tale: Innocence is a game that not only captivated me right from the start, but I couldn’t put it down.

A Plague Unlike Any Other

The story here starts out with players assuming the role of Amecia, a young girl of noble blood out on a hunt with her estranged father. Here we get a simple glimpse of who she and her family are. Through various dialog and actions during this opening, players can start to suspect there might just be more skeletons in the family’s closet and with the plot itself.  She doesn’t seem to know her parents very well, especially her mother and brother, who has been sick most his young life. Soon after arriving back home, a religious Inquisition arrives and the household comes under attack. With chaos, death, and panic setting in, it doesn’t look good for the two siblings. Amecia and Hugo soon find themselves on the run as their story begins, with much darker things happening in the world around them.

When players are not being guided by the narrative or watching one of the extremely well-acted cut scenes, the gameplay here is very linear in nature. The game is broken down into chapters, each one with unique game scenarios they through at players. Featuring elements of combat, stealth, puzzles, and even set pieces. Amecia and Hugo are mostly inseparable from each other throughout the adventure. Even though they are blood related, they don’t know each other very well, much like the player. Yet through the story moments and even gameplay elements, I found myself gaining a connection to her brother much as she did herself. This sort of tandem growing relationship only helped me connect more with the emotional story elements as I got further.

As far as the gameplay is concerned, having Hugo around might seem like a huge detriment to players. I mean, babysitting an NPC character in a game almost always feels like a hassle, right? Not so much here, as Hugo doesn’t find himself getting in the way, causing game overs, or issues in progressing. He feels much more as an assist to the player, even if the storyline would make players feel otherwise. Along the journey he and other characters will come help in solving puzzles or holding levers. It never felt like a hindrance the entire game. Instead, it really feels like a journey with an NPC helping along the way.

Amecia does have moments where she has to interact with enemies or the environment with her weapon, the sling. Using this will be critical in a multitude of ways. She will take it and swing it, building up speed before firing it off.  From progressing via environmental puzzles, to having to defend against human enemies. She will also have to use it for distraction or lighting torches to fend off swarms of rats. This is one element that really sticks out. The rat plague is menacing and one that will continually show up in the game throughout and surprising ways. Honestly it’s just a sight to behold as hundreds of rats will show up on swarming on screen. I was always surprised to see these creatures show up, and find new ways of dealing with the nasty menace.

While the gameplay could prove to get rather repetitive in nature, upgrading the sling, and the ability of gaining new tools to attack will keep things fresh. Starting off with basic rocks, eventually players can gain use of explosive, sleeping chemicals, and acid attacks to name a few. Traversal puzzles will also keep folks busy trying to figure out how to proceed through a rat swarm or past certain enemies or environmental blocks. All this could wear out its welcome rather quickly, but the devs continually find a way to make experience interesting whether it’s gameplay dynamics changing or new interesting story elements. I also have to mention the pacing here is absolutely sublime; never staying in one location too long or one gameplay loop too often. Amecia is a fragile character and by that I mean she has no health bar. If she is caught, or attacked, that’s it, game over.  This could come off as feeling too hard or challenging but it never felt unfair or hard to progress even during a few of the scripted attack scenes. Players are put right back into the game and to try again. 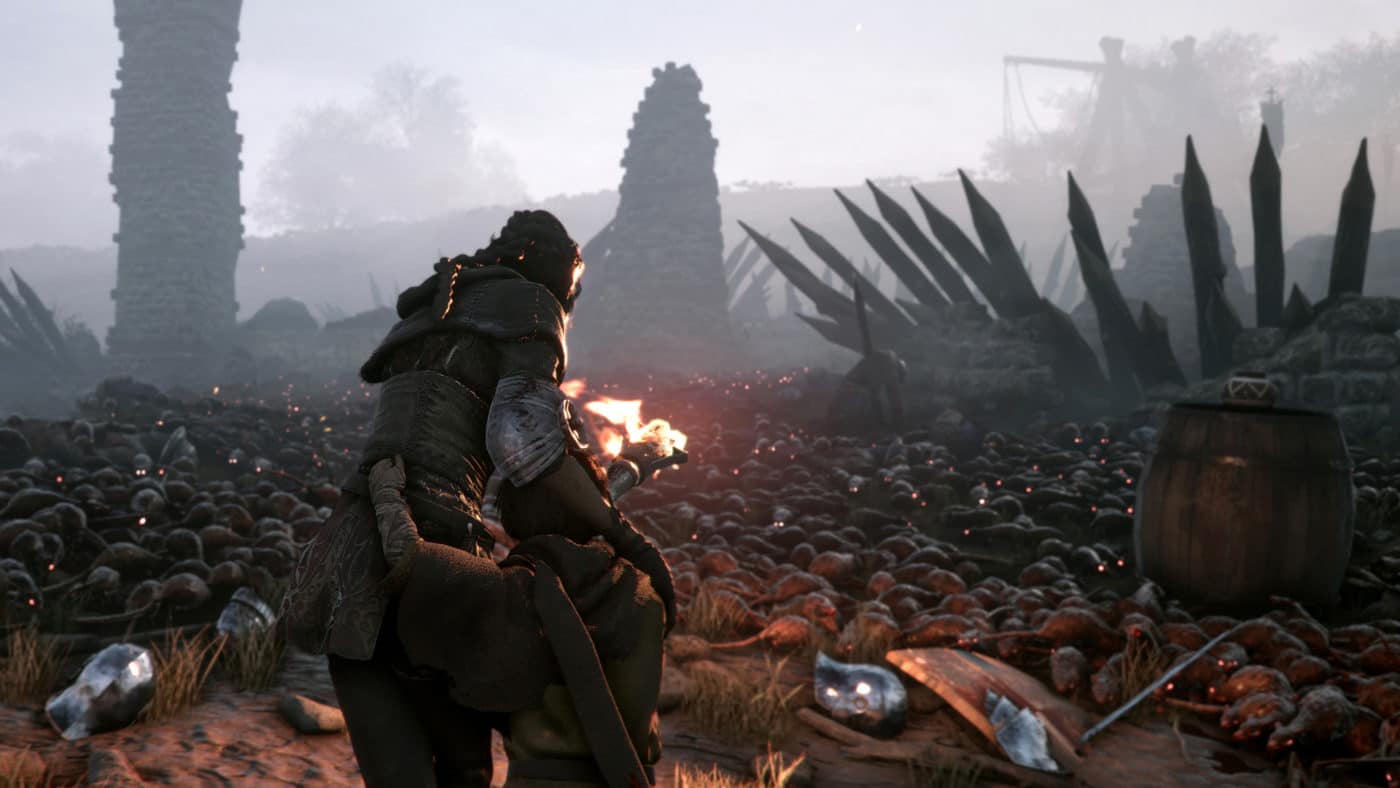 While the gameplay is satisfying and keeps things super interesting for its 8-10 hour duration, from a visual standpoint, this one is a stunner. From beautiful outside vistas, to dark and creepy dungeon like aesthetics, if someone told me this game was from a AAA, multi-million (nothing against Asobo Studio), I’d believe it. Asobo Studio has done work on a multitude of games, but this is the first huge game to come from them that delivers on this sort of quality and scale. Dark areas illuminated by the glow of fire or the moon. Beautiful areas of outdoor leaves that brighten the screen.The visuals alone are worth the price of admission and that’s not even talking about the wonderful voice acting and soundtrack. With dramatic melodies that provide both haunting and tension filled moments. Meanwhile the voice acting between Amecia and Hugo just pulled on my heartstrings as I deeply wanted to see what the game had in store for the two of them, and couldn’t be happier with their sibling relationship as it developed. 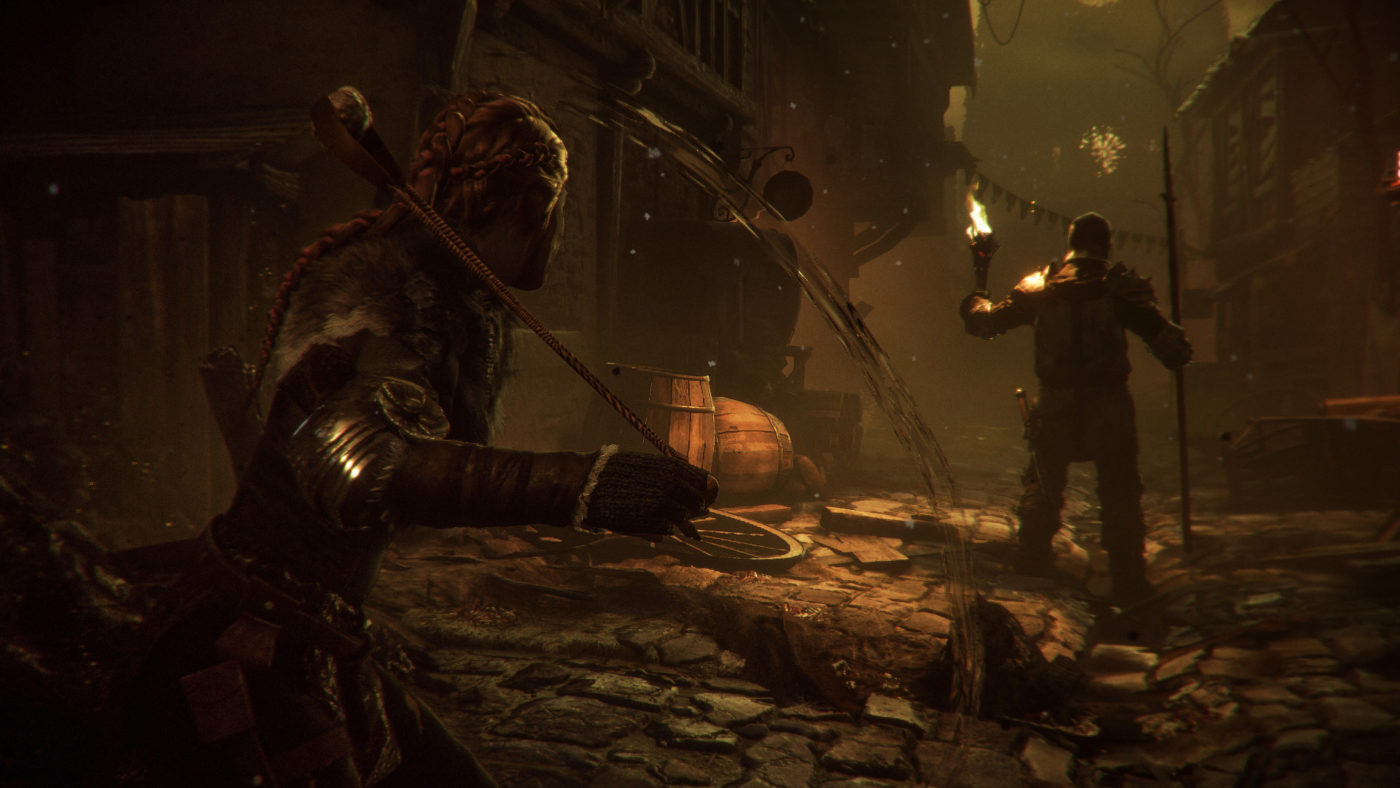 A Tale Worth Telling

It’s hard to really pull apart anything that A Plague Tale throws at me. It has outstanding visuals, wonderful varied gameplay, and a soundtrack worth paying attention too. Its story elements are heartfelt, mysterious, and tragic. There is a poetic feel to the game in both the way it portrays an extremely hostile, nasty world yet filled with captivation and hope. I didn’t expect the game to be as dark as it was in theme and plot. I was really taken aback by just how well told a story about young adults and kids, was mixed with such a dark oppressive mood, which only had me rooting for them even more. If I had to say any elements of the game that were sometimes frustrating, it was the checkpoint system and trial and error moments. Sometimes it seemed to put me back much farther than expect, having to attempt different tries at a solution. This issues sort of go together to make some moments come off more stressful than needed, but this is a mostly rare occurrence. Instead I’m left with a game that not only exceeded any small expectations I might have had for it, but blew those expectations away. A Plague Tale is THE surprise hit of 2019. A narrative driven experience I won’t soon forget and I was already wanting to start over with before I finished. With the quality Asobo studio has shown on this release, they have my full attention for whatever their next project is.

Review code provided by the publisher. Spent close to 10 hours surviving the rat plague on the PS4 Pro. You can read MP1st’s review and scoring policy right here.