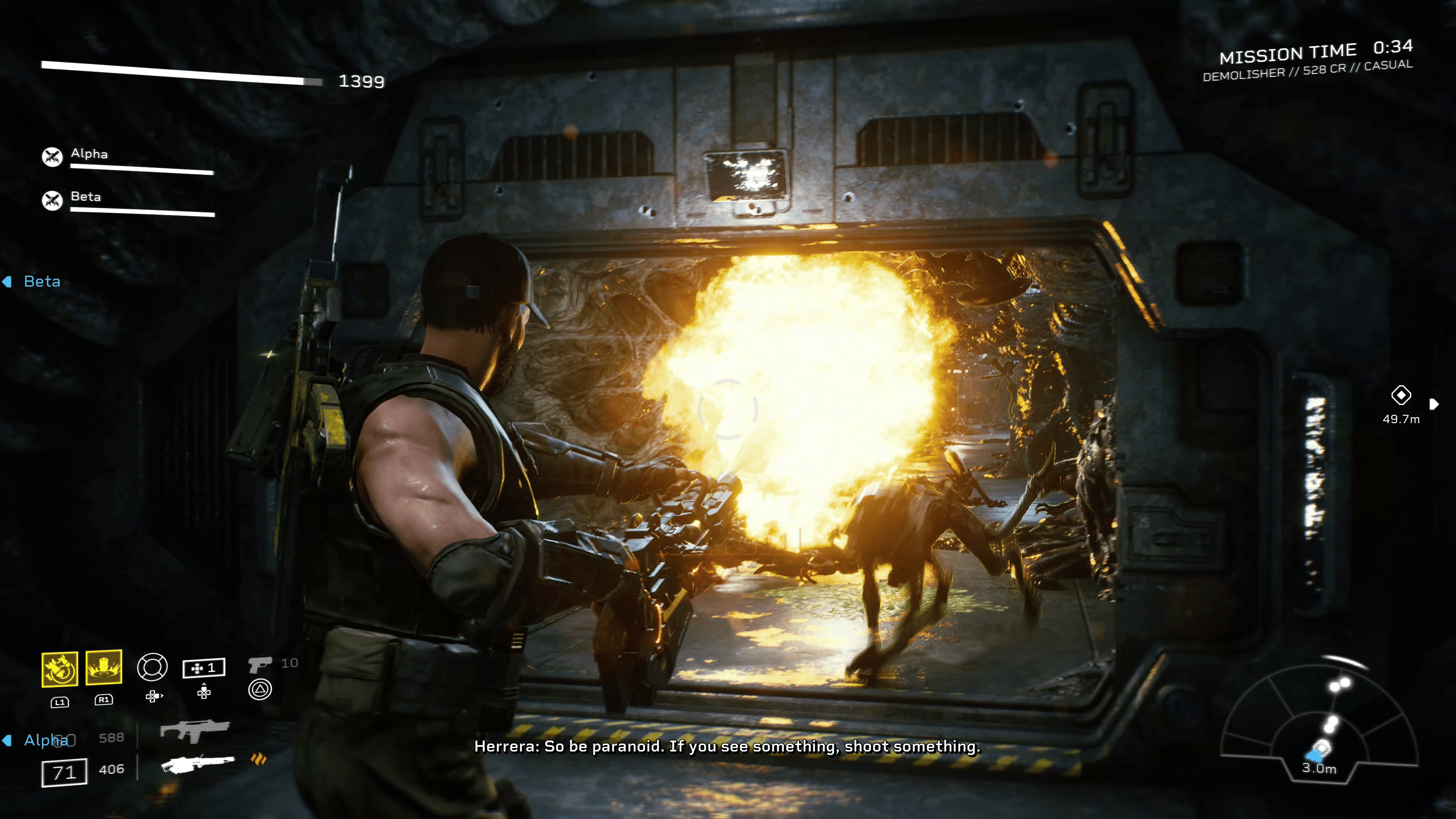 As a long-time fan of the Alien franchise and a huge fan of both Ridley Scott’s all-time classic horror film, Alien, as well as James Cameron’s Aliens, it’s been a long road to arrive at a proper game that gives the feeling of the latter classic action horror film. Aliens Fireteam Elite clearly shows a love for the franchise in its presentation and lore. For fans there are a ton of callbacks, sound cues, details in the level design that gave me the feeling that Cold Iron studio clearly know their stuff when it comes to the entire franchise, including Prometheus (a movie I am not a fan of from a storytelling standpoint). Unfortunately, that same level of love and care doesn’t extend to the amount of content and variety in the gameplay.

Set in the year 2202, 23 years after the events of Alien 3, the Colonial Marines aboard the USS Endeavor are responding to a distress call from one of the colonies. With this being an Aliens game we all know what they discover and from then on the missions lead them to tracking down the source of the xenomorph threat and destroying it. The story is told through communicating with NPCs on the Endeavor between missions and over comms in mission as well as through pieces of intel you find throughout each level. It’s not very compelling and some of its “surprises” you can see coming from miles away. The best bits are the aspects of lore from the franchise you get in the environments and the encounters. Beyond that, it’s about as middling as it can be. 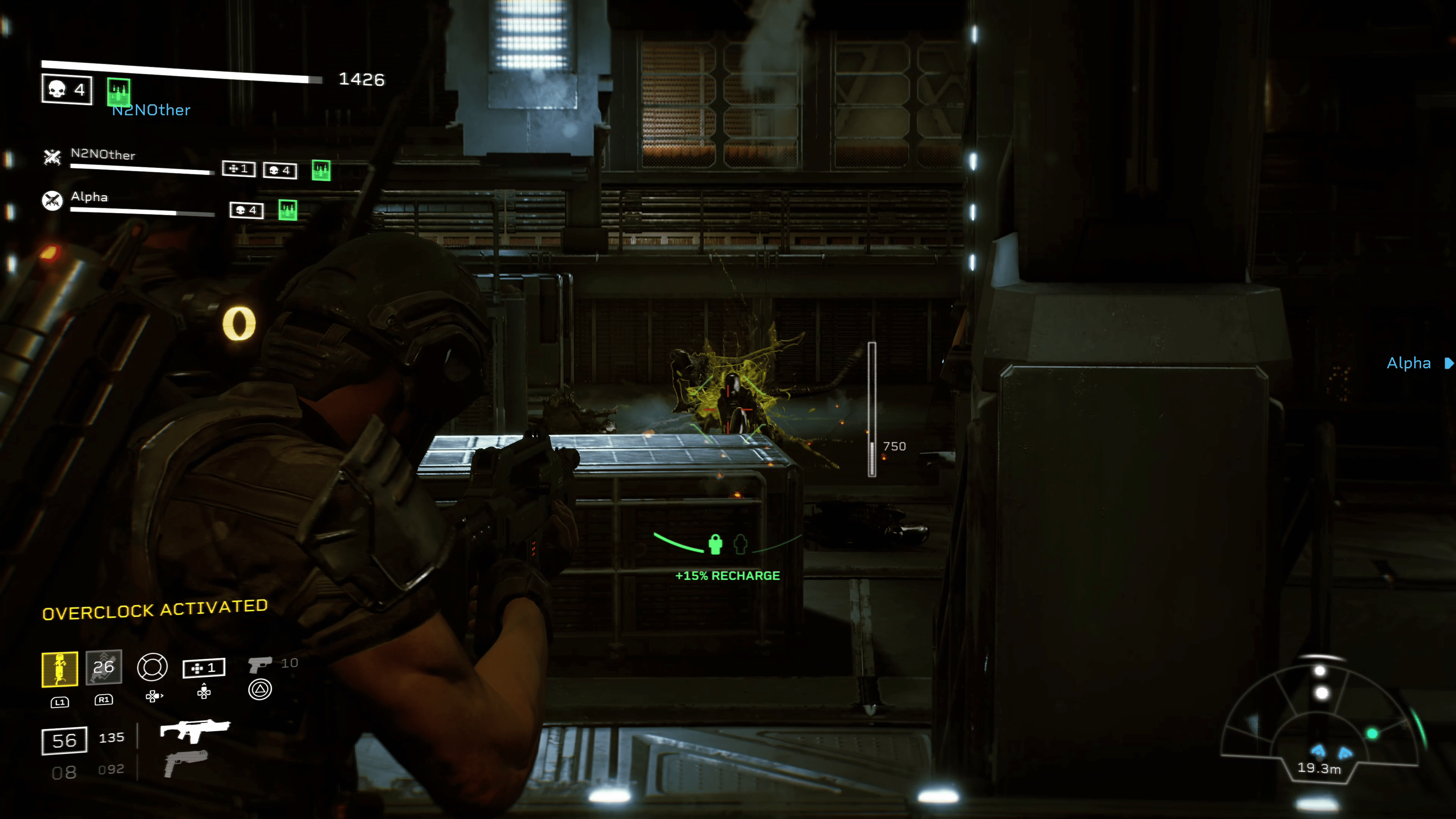 Players will take on the role of one of four classes – Gunner, Demolisher, Technician, Doc (Recon is the fifth that unlocks once the campaign is completed) and each class has their own special “Kit” abilities that work on a cooldown cycle. One that buffs the group and the other that can vary on support or assault such as an AOE medical beacon that heals everyone in its radius or a grenade can take out grouped up enemies, for example.

In my playthrough I used both a Gunner and a Doc. The Gunner is the all around class with an M41A/2 Pulse Rifle (the standard full auto assault rifle used by the Colonial Marines) and a pump shotgun with my abilities being “Overclock” – a buff that boosts fire rate and reload speed for the team and a grenade. Doc, on the other hand, has an M41A/2 Pulse Rifle and pistol and has the Trauma Station (the aforementioned healing beacon) and Combat Stims which increases weapon accuracy and stability as well as stamina regeneration and movement speed for a brief amount of time. In the moment to moment combat these kills definitely complement each other and depending on what classes your squadmates choose, you can pretty much handle every encounter.

Since there are only three players per squad a lot of the skills each class has will be mix and match. The game doesn’t restrict players from doubling up on classes but be aware, classes like Doc have much less firepower than say a Gunner or Demolisher, so a squad full of Docs might not be the best decision. Though it might be common considering the weekly challenges do sometimes require three missions to be completed with one class and randoms that join you could all be going for the same challenge. 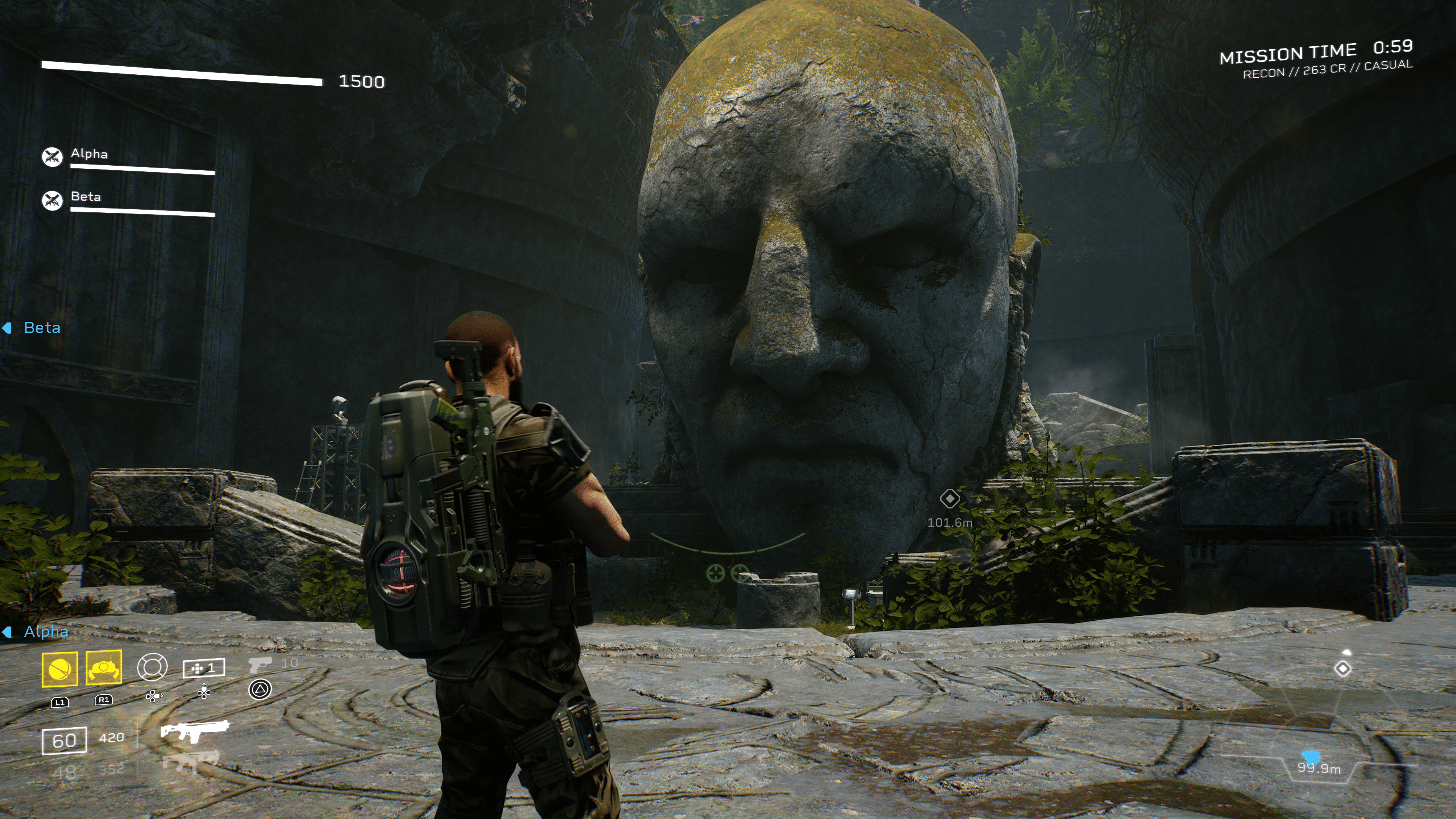 The combat feels good and it’s fun dealing with the different types of xenomorphs and other enemies I won’t spoil. It’s definitely frenetic at times and where the gameplay mostly shines. I should note that outside of a few missions in the middle of the campaign where a new enemy type that uses guns and grenades is introduced, cover is pretty much useless. The xenomorphs can get around your cover in all manner of ways so it’s best to be moving around and keeping your head on a swivel in order to survive.

As I mentioned earlier, the presentation in the Alien license is great here. The lore callbacks go deep, the level design evokes the very best of the series, the sound design is spot-on, and the xenomorphs all look great and have fun little touches like the xenomorph Drone has the transparent cover that lets you see the skull of the alien just like the in Scott’s original Alien. There are also Warriors, Praetorians and others that I won’t spoil here. If you love the franchise you’ll get a kick out of what the game throws at you.

The campaign is broken into four main missions with three sub-missions each. Each one generally lasts about 20-25 minutes each and it’s here where my issues with Aliens Fireteam Elite truly lie. There’s next to no variety to these missions. Each one consists of navigating a linear corridor (the branches are dead ends that might lead to some intel or a chest that spawns in a random location), taking out enemies, getting to a larger open area, fortifying that area with turrets and traps found in that area, activating a mini-horde mode, moving on, rinse and repeat. Every. Single. Time. On the rarest of occasions my teammate and I (third spot was taken by a bot), had to “search” (hold down a button) in three or four different places around a room for something, but beyond that nothing changes from mission to mission in terms of what we had to do.

Completing the mission and doing so well will give you new weapons, cosmetics, cash and XP points. The new weapons are cool but I found myself sticking mostly to the pump shotgun for its crowd control, and didn’t really find anything better to replace it. Additionally, currency can be spent on weapon attachments that give stat boosts. There are three categories for the attachments that are barrel, clip, and sights. Barrels can boost damage and stability among others, clips boost things such as ammo capacity and reload speed and sights increase things like accuracy and zoom. Cosmetics are surprisingly thin with only one variant for the armor, and a few hats/helmets, stickers, paint jobs for weapons – ie nothing very interesting or exciting. XP has the most value since it eventually will allow you to eventually unlock perks you can use that boost your class that are either general or specific to your class and must fit on the available spaces on a grid. While this will make you more efficient, the missions are still point A to B, fortify and defend, point B to C, fortify and defend, C to exit.

In order to add at least some level of variety Aliens Fireateam Elite include challenge cards which add some kind of modifier to the mission. These can be as simple as getting more currency at the end of the mission, or can serve as a detriment such as having your motion tracker glitch out from time to time which makes the direction of enemies impossible to know. Another hinderance can be where if you don’t exhaust your clip before reloading you’ll lose all of your bullets, which makes it quite the challenge for someone like me who reloads constantly, even if I’ve only fired two bullets. While it doesn’t at all change the repetitive structure of each mission, it does add a wrinkle that kept me on my toes.

There is also a requisite horde mode that is unlocked after completing the campaign that doesn’t really do much to change up the standard horde formula from many other games, including the fortify and defend sections of the campaign other than they’re longer. 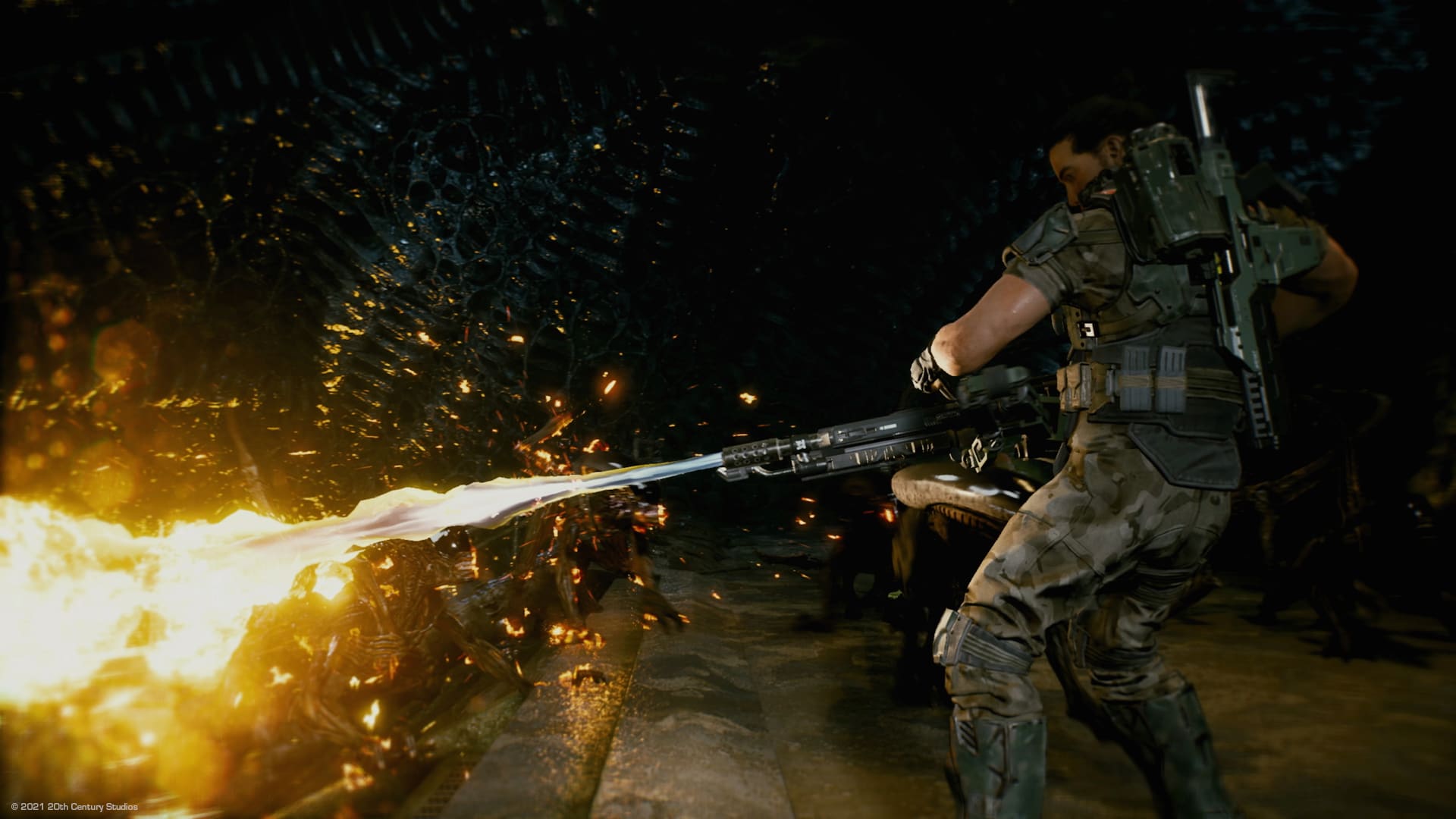 I would be remiss if I didn’t at least mention how truly terrible the ending of the game is. It’s such a mind-blowingly bad decision made here that I can’t even fathom how Cold Iron thought it would be a good idea. Without going into spoilers there is an inevitable confrontation that the game is clearly leading to and to my utter shock you don’t actually have it in a way that makes any kind of sense. Instead of this confrontation you have to run away from it. The game literally tells you that you can’t win and to run. And then when you do escape there’s no cutscene or anything to give a sense of closure to the story you’ve been playing for eight hours. You get the same “Mission Complete” screen and “How you did” wrap-up and then you’re back on the endeavor to get the closing bits of story from dialogue interactions like you did between every other mission. I don’t know if they ran out of time or money but whatever the reason is, it’s not good enough. This was a massive missed opportunity and blunder.

Ultimately Aliens Fireteam Elite is a solid time-waster that offers very little reason to come back to it once the campaign is done. The combat and attention to detail with the license are the highlights for sure, but removed from the Alien license, there is little here I can recommend over other similar games. Hopefully Cold Iron gets another shot at this and can add some variety and give players that confrontation everyone will expect and truly make it something special.

A review code for Aliens: Fireteam Elite was provided by the publisher and played on PS5. You can read SP1st and MP1st’s review and scoring policy right here.