You know, anyone who’s played a game of Dungeons & Dragons (D&D) understands just how much it’s driven by imagination, and how important role playing is to the foundations of campaigns. These worlds, crafted by dungeon masters are so rich in details, that it’s hard to find a video game that could offer an experience such as it.

Games like Baldur’s Gates come close at feeding that crave, and for good reason, as it’s world is large with near complete freedom to the players. You can be whoever you want and do whatever you please. It’s as close as a D&D representation that one could get. So of course, with Tuque Games’ Dungeons & Dragons: Dark Alliance there was a lot to be skeptical about it, but in reality it’s a D&D game not meant to give you freedom, but instead tells the story right from the action viewpoint. It’s the type of game that you would you imagine if you played directly from the perspective of those fighters, which honestly sounds like an awesome idea. Does it live up to that awesome idea though? Read on for our Dark Alliance review.

A World Plucked From D&D

You know I’m always a bit more generous when it comes to visuals on a budget tier game, because I know fully well that it isn’t a triple AAA game trying to blow everyone away in it’s visual department. I’ve kind of grown to expect them to look “ugly,” but in the case of Dark Alliance I am pleasantly surprised by how gorgeous the environments look.

All the levels in Dark Alliance come with rich diverse environments that are high in details. One stage you’ll be exploring an icy cavern, filled with poisonous liquids oozing from the floor, while another ventures into a lava-filled hellhole. There were scenes where I would stop for a moment and just take in, as a lush amount of colors, and distinguishable structures filled it. Not once during my playthrough did I ever feel like I had already played through an area.

This is one pretty looking game with some very interesting locations, so much so that they feel like they’re directly plucked from D&D. The developers capture the spirit of the universe perfectly, and there’s a lot of lore to be found it in it alone. If you aren’t rushing through battles, you can catch short conversations that goblins will have with one another, talking about some of the backstory and such.

I’ll say Dark Alliance isn’t all too heavy on narrative in regards to shoving it in your face. I know that’s not what a lot of D&D fans may be hoping for, but I do like how it’s handled with some backstory provided here for each level, and a cutscene at the start and end that introduces the big baddy of each area. Some are pretty funny to with their crude humor.

On a performance level, the game holds very well in gameplay on the PS5, even during it’s action packed moments. The one thing I will point out is that there appears to be some effects that are rendered in 30 frames-per-second (or lower) rather than 60fps. Not a whole lot mind you, but if you see a flag that’s waving in the wind, you’ll definitely notice there is some choppiness to it. Even some of the character abilities sometimes look like that, but they move so fast it’s hard to really notice.

What you will notice, however, are the choppy cutscenes. While they certainly look good, and are well animated, it’s hard to really stay focused on them when they’re playback like some sort of PowerPoint slide. They get really bad, with the audio desyncing from them entirely. I’m not sure how something like that got by, but for a game so light in it’s story, it’s a total buzzkill seeing the cutscenes perform so poorly when everything else runs smooth.

Dark Alliance features four playable characters, each falling into a specific class and role with those being the Ranger (Duelist/Assassin,) Fighter (Tank, and Archer/Sniper,) and the Barbarian (Assault/Shock Troop). Much like any other class game, each character has their own unique playstyle accompanied with special abilities. For the most part, these characters actually do feel good to play. I started off as the Ranger class because I like being able to move fast and perform a volley of slashes in a short amount of time, and it played just like that.

That’s important for a D&D based game, because you want to feel like you’re living in the shoes of those characters. Being the Barbarian made us feel like we were this massive brick wall with an unyielding force of power. The fighters, which two of the characters were classed as, differed one was focused on being the tank, while the other harnessed range attacks.

All characters, such as it is in an actual D&D game, have their own character sheets that players can level specific attributes to become stronger. Further, there is a passive tree known as Feats (again in D&D) that allow you to passive bonuses, such as increased critical attacks, stamina, and health boost. 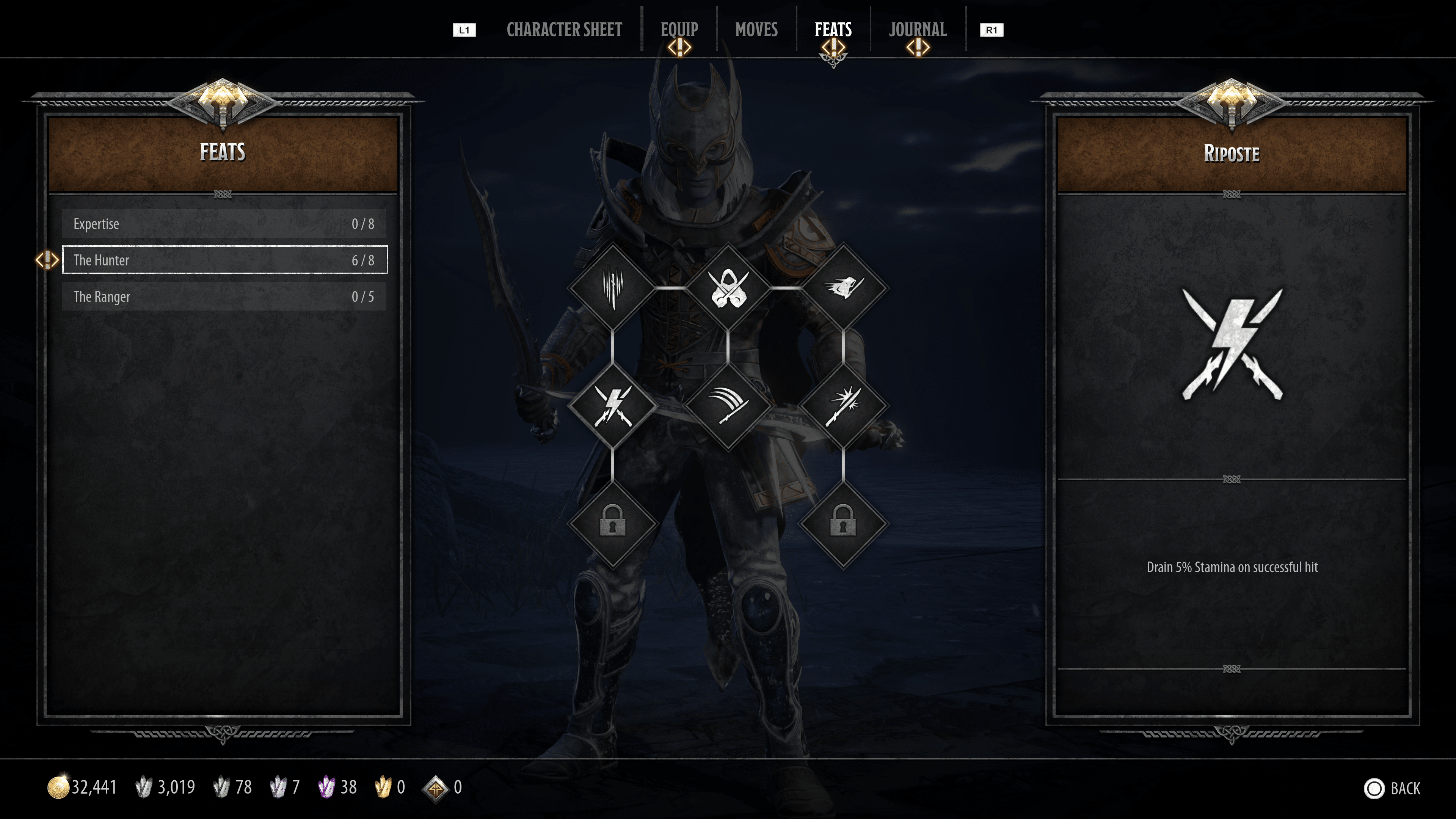 And of course you can teach your character different moves. These moves really open up combat, allowing you to perform some awesome moves. Take Drizzt for example, a Drow who harnesses magical dark abilities. A lot of his unlockable moves are focused on just that, with him being able to summon beasts to aid him in combat, summon dark hands, gain vampiric powers, and even send a shockwave of darkness to enemies.

Despite being pre-determined characters, they all felt well crafted and enjoyable to control. They are, in truth, the embodiment of what you would expect one of these D&D characters to play as. Sadly, the world that encompasses these heroes really wants to work against you, as it’s rather janky, at least in co-op.

Take one of the mid-game bosses, The Chief. The Chief is a tough fight, even with a full party of players. But not for the reasons you would think. Being a big soul player and having played and beaten every single one of them, the thought of a game being hard is a much welcomed one. Bosses are hard in those games, but they have mechanics tied to them that work and can be learned.

See that big sword being raised? Well, it means get ready to dodge. Oh, they just finished their third slash? Time to attack. You understand what I mean right They’re hard games, but with mechanics that are meant to teach you. In the case of Dark Alliance, those mechanics exists but they’re hit with so many issues that they’re basically broken.

The Chief doesn’t move very fast, and with his attacks being readable he should have been a very easy fight. Problem is, when it does come time to dodge, characters’ hit boxes felt so janky that you would swear that there was some sort of lag going on. Rolling away with his attack clearly missing would often still be met with a hit. Heck, I had him facing me at times with my co-op companion hitting him from behind, yet when the boss took a forward slash towards me it still manage to hit my buddy from behind him.

This is a huge issue in general, mostly with all the elite-brute types of bosses and enemies. What worse is that the controls felt unresponsive, especially during knockbacks. Big enemies like the giant orcs will knock you down to the ground. Sometimes you can get up right away, but more often then not you’ll be stuck in a standing up animation that takes ages. In fact, they’re so long that by the time you do stand up, the orc is already performing another knockdown attack just for the cycle to continue. This was such a hair puller for me, that we (me and my co-op buddies) eventually decided it was better to run past those enemies types whenever we could. In no instances should your animations feel 10x longer for just standing up than one of the enemies stun attacks. It’s ridiculous.

I’ll admit, this game might be better played alone and offline as most of these issues seemed to be related to the net code, which clearly couldn’t keep up with certain areas such as enemy animation. Heck, playing in co-op a lot of times we stopped and wonder what was even hitting us as we saw groups of enemies moving, but not actually attacking, least according to what was on screen. The issue did persist in solo play, but not as bad.

It doesn’t help that Dark Alliance doesn’t feature any kind of in-game rumbling, at least on PS5. I’m okay if a game doesn’t have it, even if it’s odd nowadays not to have it, but the big annoyance with this is the combat just generally lacks any kind of good feedback. Hitting an enemy just felt like hitting a massive bullet sponge as they sat there and absorbed the damage. Sure they flinch here and there, but you’ll notice them tanking damage rather than reacting to it a lot more than you should.

The A.I. in general is pretty dumb. I mean, I don’t expect top of the class, A.I. that are going to be trying to outsmart you, especially for a game that throws them at you like it’s a Musou game, but I do expect their awareness to at least be there. You could literally run right up to an enemy without them even noticing you, or stand back and kill them off with range. They don’t even notice that their poor ally screaming in pain as arrows pierce their own bodies.

It bums me out that Dark Alliance has some really good things going on for it like the progression, a loot system that actually changes character’s appearances, and the core gameplay of each hero, but the world just feels like it wants to fight against all that. I’m not saying there isn’t fun to be had, because I definitely had some in my solo sessions, but playing in co-op, the game’s biggest selling point just had too many annoyances occurring during combat.

A Dungeon Worth Waiting On

I really wanted Dark Alliance to good, and maybe it will be after some patches. The game looks beautiful and has solid performance, but for being so co-operative focus, there seems to be plenty of net-code and bugs that proved rather annoying. If you do jump in on Dark Alliance, I highly recommend the solo route as you’ll find most of those issues eliminated. But that honestly is an issue in itself, because this is D&D, and how do you recommend someone to play by themselves for a series known to be played in groups?

A review code for Dark Alliance: Dungeons & Dragons was provided by the publisher and played on PS5. You can read SP1st and MP1st’s review and scoring policy right here.