For gamers of a certain age, Pandemic Studios is remembered as an S-Tier developer that heavily influenced our childhood and adolescence. They were a studio that, in only around a decade of existence, had developed several titles that could be considered in the canon of popular gaming: titles like Full Spectrum Warrior, Mercenaries Playground of Destruction, and Star Wars Battlefront. While the studio was created by former Activision staff at the end of the ’90s, they would eventually be acquired by EA in 2007, and then be closed only two years later in 2009.

Among the games this short lived but brightly lit studio created was Destroy All Humans! An action-adventure shooter about an angry little alien named Cryptosporidium 147 who is tasked with invading Earth in an attempt to harvest human DNA to save his own species known as the Furons. It was a silly cartoonish romp filled with movie and cultural references set in the ’50s. It both reviewed and sold well, so eventually they made a sequel simply titled Destroy All Humans! 2 in 2006. After a few years of IP rights volleyball, Destroy All Humans! was remade and released by THQ Nordic and the Embracer Group (read our review of that here). Now it’s time for Destroy All Humans! 2 to get its shot at a remake. Given that the original sequel was seen as a major improvement to the original first game, do we dare hope that lightning has struck twice?

Crypto to the Rescue?

The moment I booted up Destroy All Humans 2 Reprobed, I was actually somewhat taken aback. The specific style of cartoon graphics on display is impressive to say the least. It is still modern and beautiful to the eye, but it clearly evokes the way more cartoonish games of the early 2000’s looked. Whatever there is to say about DAH2R, the fact that it’s gorgeous to look at has to be included. 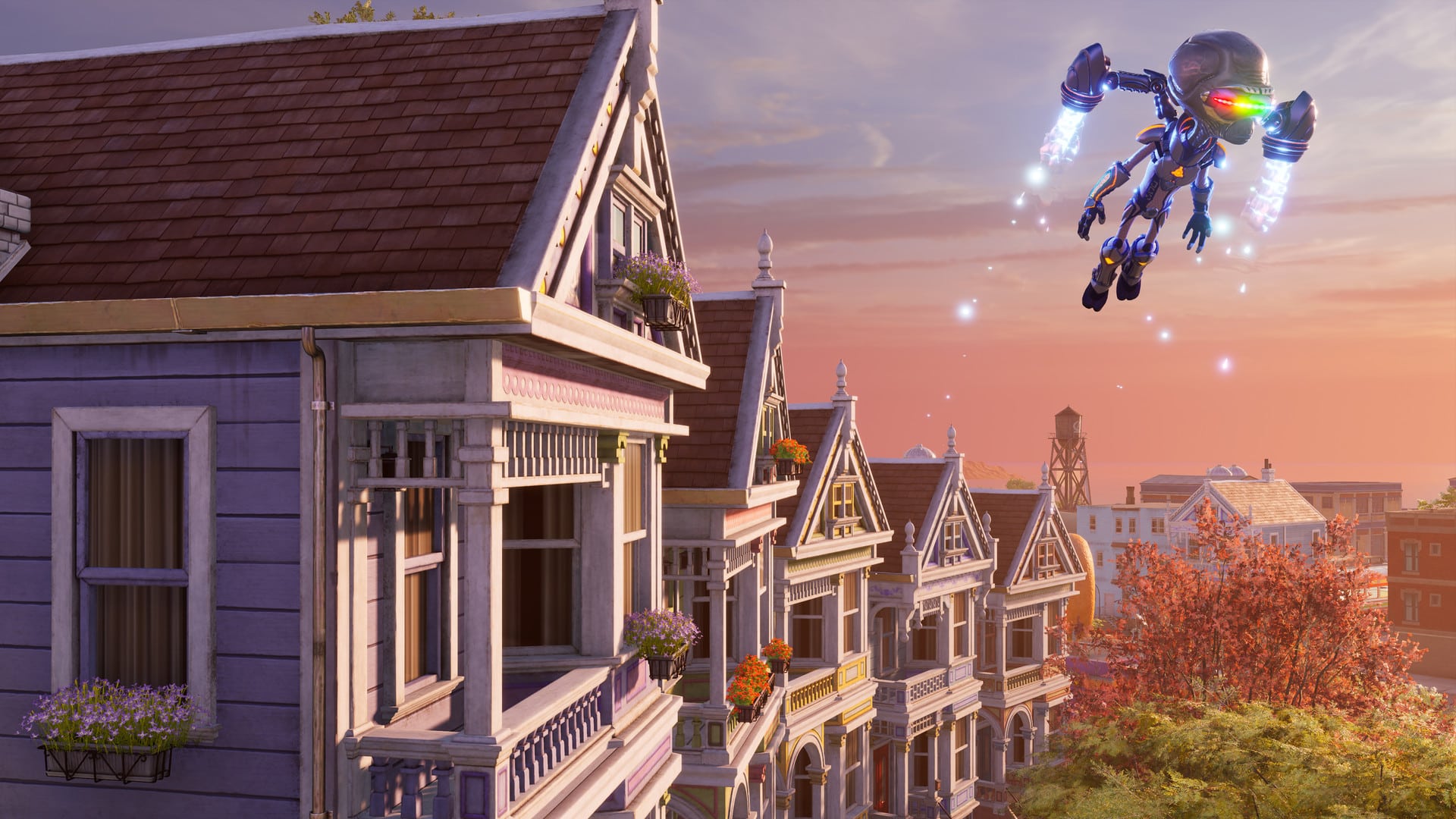 The opening cinematic, a debriefing among KGB operatives, establishes that in the previous game Crypto 137 became President of the U.S.A. while in disguise. He was then at some later point killed, and his body came to be used as a test subject in the CIA. Crypto 138, who has taken over Crypto 137’s life as president and spends his time partying with hippies in Bay City, is the first Furon born/cloned with functional genitalia in hundreds of years. It turns out that Crypto 137’s mission in the first game was successful. He managed to harvest enough ancient pure Furon DNA from human brains to save the species after centuries of war and forced inbreeding restricted natural reproduction. The result was that all Furons were just clones of themselves: some having been cloned hundreds of times already.

The KGB decide to nuke the mothership in orbit over Bay City, and hopefully kill the new Crypto in the process. The explosion kills Pox, Crypto’s grumpy boss. As massive pieces of the ship fall out of the sky, Crypto 138 has to spring into action to rather ironically save the humans that are now vital for the continued existence of the Furon race. The whole thing could be played deadly serious if it wanted to, but it is instead presented with a juvenile kind of wink and nod silliness that seems to struggle between being campy and slapstick.

As someone who never played the original game, it is hard to tell how much of this is unaltered or completely redesigned. Make no mistake, this is a full-blown remake not just a high quality remaster. It is an excellent study in the struggle with a remake to find the balance between updating the game for the current industry norms, and maintaining nostalgia for how games used to play. DAH2R dances along this line as well as any other high quality remake has. There are moments where the game alternately feels like a delightful throwback to games of the 2000’s, namely in the gameplay, and others where it just feels awkward and outdated, admittedly more in the writing.

During the KGB assault on Bay City while spaceship parts rain down, Pox (who is now a hologram on a hovering tripod after being killed on the mothership) gives a tutorial on the basics of gameplay. After this initial excitement calms down, Pox realizes that Crypto, given his newly minted male genitalia, is the spitting image of the Furon God of Sex “Arkvoodle.” This means that Crypto is the prophesied messiah of the church of the Righteous Crotch. The one who is supposed to bring great sex and enlightenment to the masses using the Good Pickup Line of Arkvoodle. So yes, in Destroy All Humans 2 Reprobed, you are fighting the KGB while also getting an alien sex cult off the ground starting in a park in (not) San Francisco. Like I said, the story won’t be for everyone.

Though to be fair, this is all in dialogue before and after missions. Nothing graphic is shown, except, of course, for heads exploding when you’re harvesting brains. The humor is full of innuendos and heavily features Crypto being extremely clumsy constantly trying to hit on a female Russian agent named Natalya. But if that’s your sort of thing, you might have a real winner on your hands with this one. Like I said, I liked it enough and got a chuckle here and there. I even started to feel genuine emotion for Crypto. He is the first of his species in generations to be able to reproduce naturally, but he is in fact completely incompetent on how to talk to women. Sure he’s a homicidal little monster with a discount Jack Nicholson voice who constantly references his own “package” and cliched movies: but he’s also kind of an awkward adolescent trying to be impressive and just not doing a great job of it. Your mileage will definitely vary.

A Space Oddity in a Ring of Fire

The gameplay of DAH2R is much more of a straightforward matter than the writing. It’s great and I loved it. Perhaps that is too much of a flat and frank way to put it, but the moment to moment gameplay is easily recommendable for anyone to at least try. There isn’t a lot of filler, and what few side quests that are there present just the right amount of variety. It is mostly a very enjoyable tight game that respects the time you have to play it. You quickly unlock a chunk of your weapons, both as Crypto on the ground and for his saucer on aerial missions. They aren’t complex or layered missions, but they are varied enough that it never gets boring. This is one of the parts I mentioned earlier for being delightfully nostalgic. 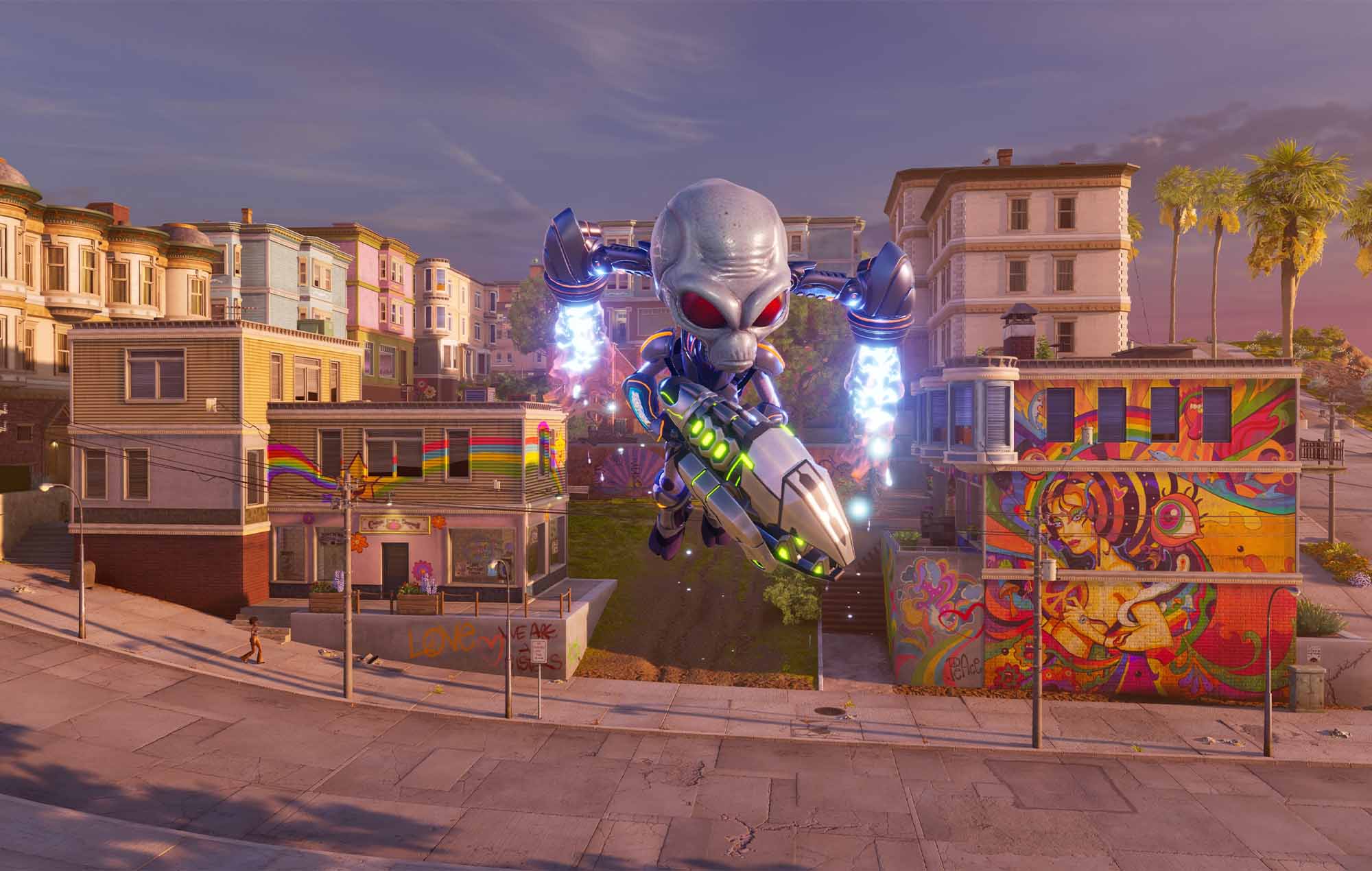 The only recent game that felt like this to me was the Spyro the Dragon Reignited Trilogy. You can work through this campaign rather quickly (probably 10 to 15 hours). If you do every side quest, then you can probably finish in 20, but there is no filler or fluff in that time. You unlock weapons and points to upgrade weapons at a steady clip, so you always have new stuff to play with, and you don’t get bogged down with a screen full of icons. There are collectables, but they aren’t shoved in your face, and are more of an excuse for staying in each of the game’s five worlds longer if you want.

There are missions in approximate versions of several cities. I won’t say all of them to avoid spoilers, but the third and last were my favorites. Each feels different and new with one or two being standouts among the lot.

There are a couple of downsides that aren’t really an issue with this game as much as with the original game. Most of the weapons are essentially auto aimed for the player, and the combat can occasionally be too easy once you power your way up. If you like feeling like a hyper powerful alien, then you’re in luck, but this isn’t much for a difficulty hound to sink their teeth into. It isn’t like I never died but it never felt like a real challenge, and if that’s something you’re looking for, then this isn’t it. This is a power fantasy through and through. The saucer isn’t quite as fun as just running around on the ground. Thankfully, the saucer portions are short and to the point so they don’t overstay their welcome.

King of the Road?

Destroy All Humans 2 Reprobed should be a game that is easily recommendable for just about anyone looking for a fun throwback to open world games of old, but the writing and dialogue might just be more cringe worthy than some can handle. If you end up having to skip through most of the dialogue to enjoy the gameplay, so be it; because I think this game is worth trying out. 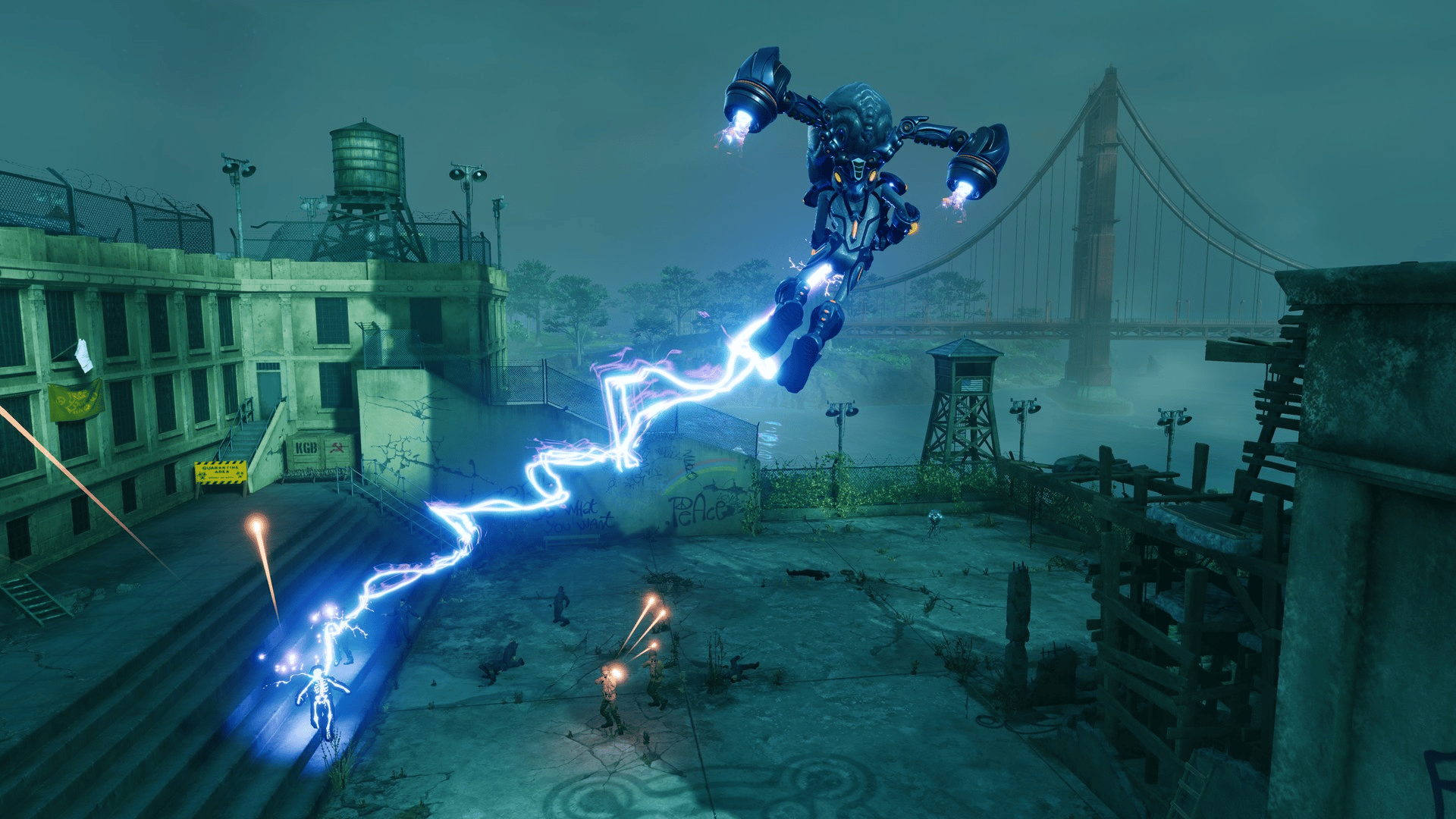 It’s a shame the way that such a talented and multifaceted developer like Pandemic Studios ended on such a shoulder shrug of a closure. According to what I’ve read, the original team dispersed to the nine winds around the industry and took up jobs at studios that went on to make games in the Call of Duty franchise, Titanfall, Halo 4, and a bunch of mobile games. If anything, this remake ought to give the original devs some pride that a game they made more than 15 years ago is still loved enough to warrant this kind of project. THQ Nordic now owns the rights to a couple dozen great IP from gaming’s past. Recently they announced a reboot of Alone in the Dark for example. And one can only hope that they will continue to publish work that’s as respectful of the original properties as this one. As silly and juvenile as those IPs might be.