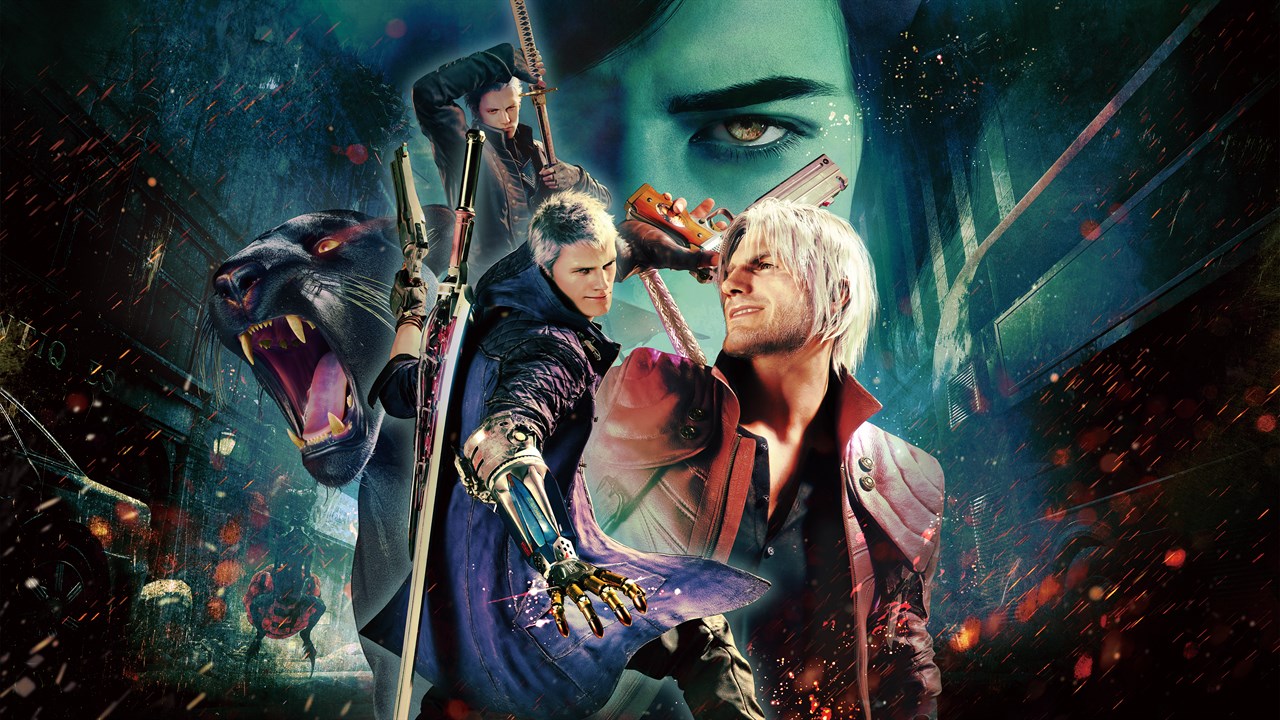 For some bizarre reason that I still don’t understand, I never played any of the seminal Capcom series growing up. Whether it be Street Fighter, Mega Man, or Resident Evil, my young mind was drawn to different franchises instead, mainly of the Nintendo variety. I’ve since been making up for the mistakes of my youth, diving into the Resident Evil franchise and quickly realising I had unwittingly let a brilliant series fall by the wayside. Devil May Cry is the latest series I’ve taken an interest in on my Capcom franchise voyage, with Devil May Cry 5 Special Edition launching alongside the PlayStation 5 and Xbox Series X/S consoles. Does its hack and slash gameplay elicit joyment or frustration? Read on for our Devil May Cry 5 Special Edition review.

Five years on from the events of Devil May Cry 4, Devil May Cry 5 is set in Red Grave City, the hometown of everyone’s favourite Devil Hunter Dante. An enormous demonic tree known as the Qliphoth has been erected in the city by the Demon King Urizen, who plans to use the unique power of the tree to take over the human world. Once fed enough human blood, the Qliphoth bears a singular fruit capable of giving the individual who devours it unimaginable power. Attempting to stop Urizen’s devilish scheme, Dante, Trish and Lady attempt to fight him, only to be swiftly defeated. Nero, a young devil hunter who lost his hand to Urizen witnesses the battle from the sidelines alongside V, a mysterious figure who appeared in Red Grave City only days prior to the birth of the Qliphoth. With Dante defeated and the hopes of defeating Urizen slim to none, the duo escape and eventually regroup to head back to the Qliphoth to retrieve Dante, destroy Urizen and save mankind from a demonic takeover.

When it comes to the narrative, it definitely feels catered for those who have played through prior entries in the franchise. There is a short history of DMC video available on the main menu that does a decent job of explaining the events of the prior games, however you will definitely benefit from knowing the characters prior to jumping in to this entry. Even though I hadn’t played any DMC titles, I still found the narrative particularly enjoyable. The plot exudes zany over the top anime silliness with its numerous twists and revelations, and the cast of main characters are all likeable and varied. Nero is a confident hot head that I can’t help but root for, while Dante’s laidback and carefree nature in the face of adversity makes him a character that is heavily entertaining. V with his quiet demeanour and motives shrouded in mystery made him a character I also loved, as I was always invested in the secrets he seemed to be hiding. The characters of DMC5 succeed in making the story an amusing one for both newcomers and veterans.

They also look absolutely gorgeous, as does the game overall, with the RE engine Capcom have been using since Resident Evil 7 proving to be a visual stunner yet again. Both characters and environments exhibit plenty of realistic detail, a fact that is only made more apparent in the special edition with the addition of ray tracing. Ray traced reflections and shadows can feature throughout your Devil May Cry 5 Special Edition playthrough if you so wish, with multiple graphical options at your disposal. On PlayStation 5 and Xbox Series X 4K/30fps is possible with ray tracing enabled with 4K/60fps possible if you turn the raytracing off. If you want a 60fps experience with ray tracing you can do so by dropping the resolution to 1080p. Lastly there is a mode that offers up to 120fps in 4K. While it doesn’t always hover around its intended target and does drop a decent amount of frames throughout cutscenes, however it does offer up a surprisingly smooth and attractive experience that complements the frenetic gameplay. With four different performance modes to choose from, Devil May Cry 5 Special Edition affords players the luxury to tweak the graphics and framerate to their liking, even if the framerate isn’t as stable as it arguably should be at times. I for example prefer frame rate over graphics, so I played mainly in the 120fps mode while also testing out the 4K/60 FPS ray traced mode. 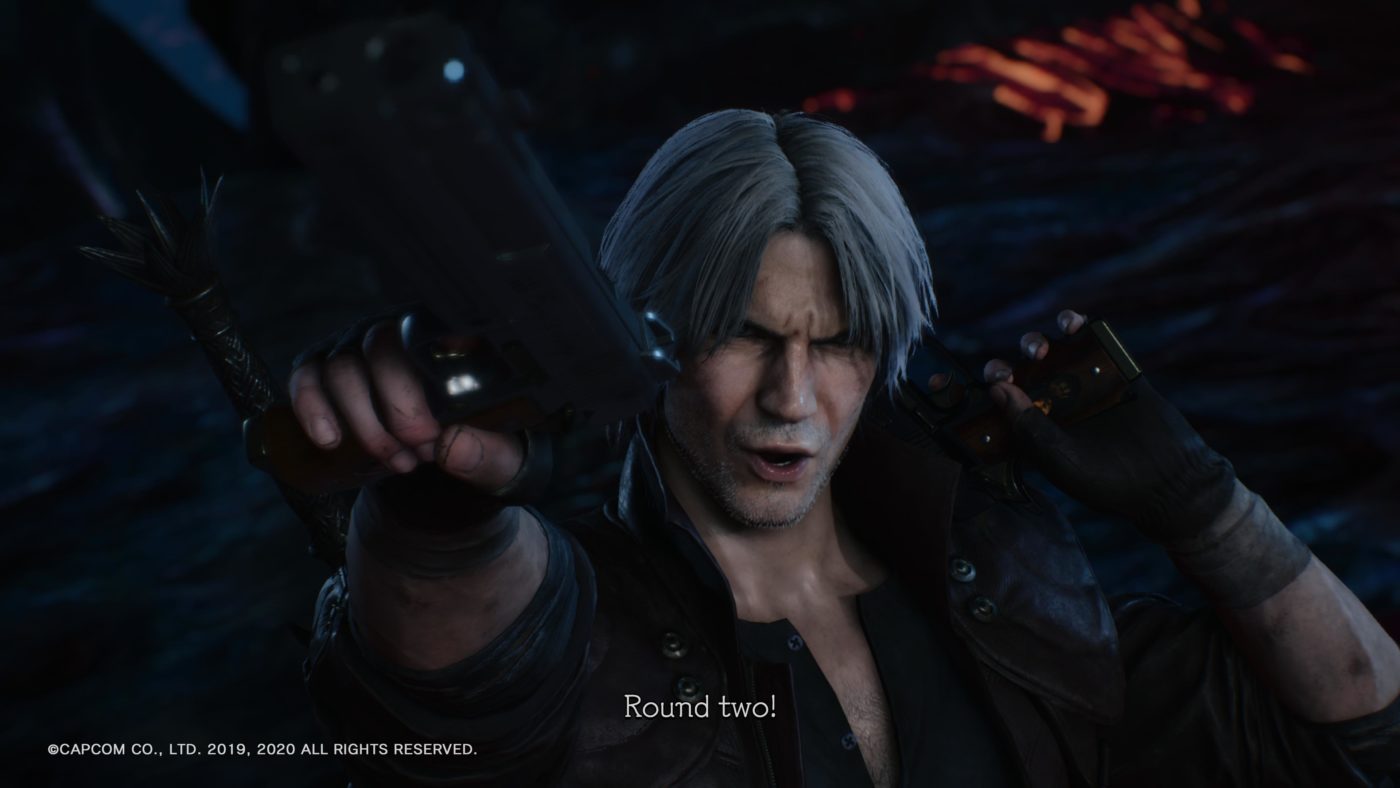 Devil May Cry 5 is thankfully as great to play as it is to look at. You make your way through a linear level as Nero, V, Dante, or Vergil (Dante’s rival and brother is newly playable in the Special Edition!), hacking, slashing and shooting your way through the countless demons that were stupid enough to stand before you. Some hack and slash games fall victim to repetition and quickly begin to feel stale, but the differences in how each character plays alongside the combat that requires you to be as frenetic and stylish as possible results in an experience that never really feels boring.

Nero is the main protagonist throughout Devil May Cry 5 and is the first character you experience. He is probably the simplest to understand, with an easy to grasp style of play. He is equipped with an excellent blade known as the Red Queen, as well as the Blue Rose, his handy revolver. The Red Queen can be revved to allow for greater damage output using the combustion engine attached to it called the Exceed ability. Lastly, since he lost his arm at the start of the game, he can use a variety of different devil breaker arms in combat. They are expendable and eventually break, but they can pack a much needed punch. My favourite one is Mega Man’s Mega Buster because it allows you to emulate the Blue Bomber, charged shots and all.

Dante can be seen as comparable to Nero with the sword and gun combo, however he has far more weapons in his arsenal and an intimidating level of depth. He has swords, a powerful pair of gauntlets, his trusty pistols Ebony and Ivory, a motorbike he splits into two to do melee attacks with and somehow he still has more toys to play with, including the Devil Trigger that allows him to turn into an even more powerful demon form. The added depth with Dante alongside the variety of weapons appears in the form of styles. Dante can change styles with the tap of a directional button, granting him the ability to activate the swordmaster, gunslinger, trickster, or royal guard style. Swordmaster gives Dante an additional move with melee weapons, while Gunslinger boosts the efficacy of firearms. Trickster provides a buff to Dante’s mobility and the Royal Guard allows Dante to parry and return serve to demons with a powerful strike. Dante’s scary amount of depth and variety makes for a character that is fun to play but difficult to master.

Lastly of the original playable trio is V, a unique character who uses his demonic allies to battle instead of carving them up himself. Griffon serves as his ranged attack, while Shadow and Nightmare get up close and personal in combat, with Nightmare serving as a special ability spawn. Like V, Griffon and Shadow have health bars, which when depleted cause them to disappear for a period of time. Sticking close by with the duo reduces the likelihood of this happening, but when it does it can leave V in a spot of bother due to his miniscule damage output. Having Griffon and Shadow drop the enemies health to the point where they can be finished off by a few stabs on V’s trusty cane is the key to success. V’s distanced style of play makes him noticeably different in comparison to Nero and Dante, and while I think some may be perturbed by that, I actually found him really fun to play and by far the easiest to perform impressive S rank worthy attacks with. 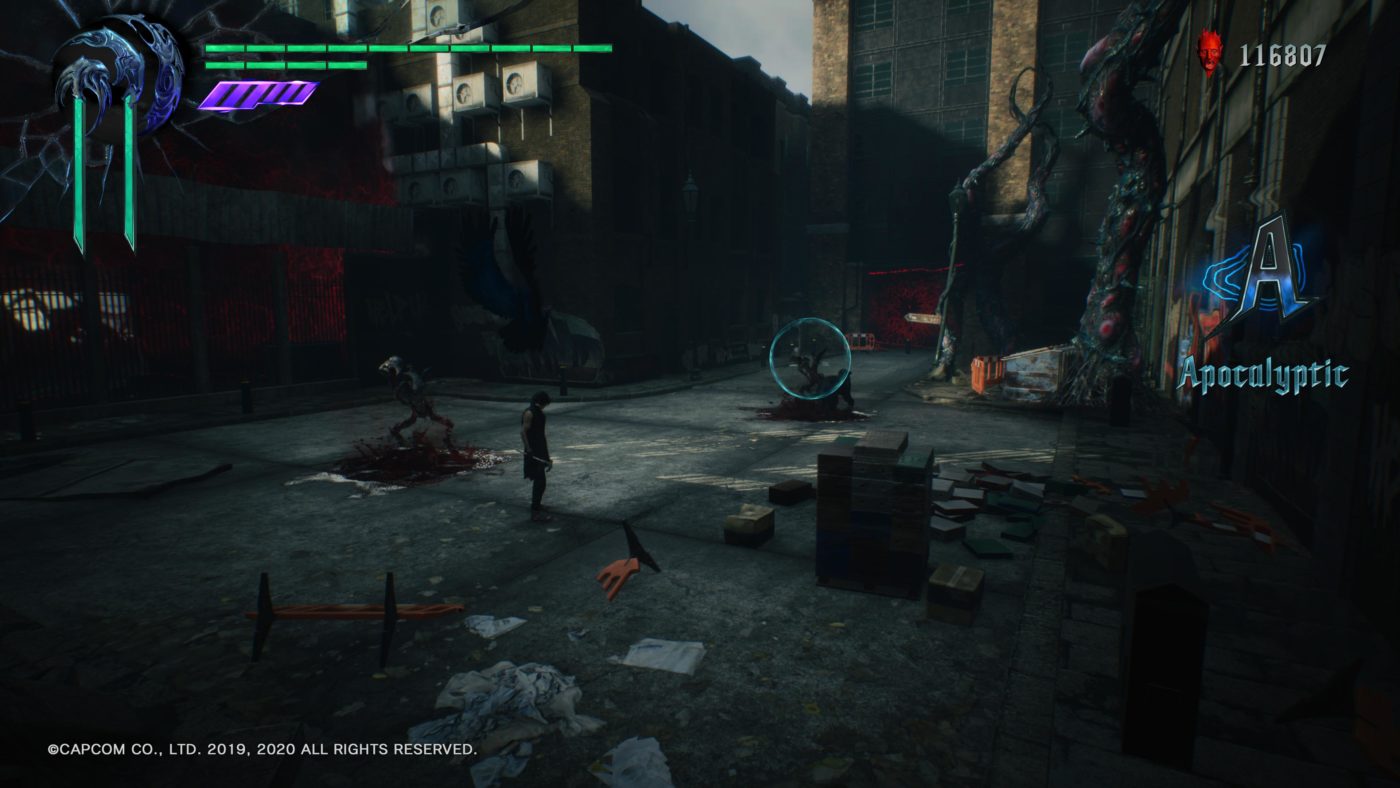 Vergil arrives in DMC5 SE as the newest playable character. With a play style that appears to sit between the newcomer friendly Nero and the depth heavy Dante, he uses Beowulf to perform hand to hand combat and his trusty Yamato to eviscerate the enemy. His special that can be triggered by spending his concentration gauge is pretty badass, but because of it’s spoilery nature I’ll leave it to you to see it when you’re ready with your own eyes. He simply slots in as a playable character into the story missions, which is fine, but it would have been nice to have had some new cutscenes that give him a bit more screen time.

Each character’s slew of weaponry will lay waste to the demonic foe, however in order to achieve a higher rank throughout each mission, you’ve got to be as creative and stylistic with your combos as possible. Chaining attacks and not getting hit by enemies is the best way to establish a combo, but creatively sifting through and utilising each weapon throughout the combo is your best way to ensure your B ranks turn into S ranks at the conclusion of a mission.

Further aiding your quest for stylish combos and higher scores are the myriad of upgrades that can be purchased throughout the game using Red Orbs collected throughout missions. From upgrades to your health to upgrades to your moveset, there is plenty to spend your collection of orbs on. When you aren’t fighting demons, you will be exploring levels collecting these handy orbs, alongside various other different colored orbs. Green ones refuel your health bar, while blue orbs when collected extend your health bar. Purple orbs level up your Devil Trigger gauge which can be handy for extending your powerful demon attacks, while white orbs found in levels will replenish it. Lastly are the gold orbs that allow you to revive yourself when your vitality gauge is depleted and you are downed. While they aren’t too handy in the easier modes, they are a handy item to have in harder modes, such as the new Legendary Dark Night mode that features far more enemies than any other mode. Speaking of new modes, Devil May Cry 5 Special Edition features a Turbo mode that sees the game played at 1.2x speed, leading to an even more intense affair. It doesn’t feel too much different to me, but quicker means better, right? 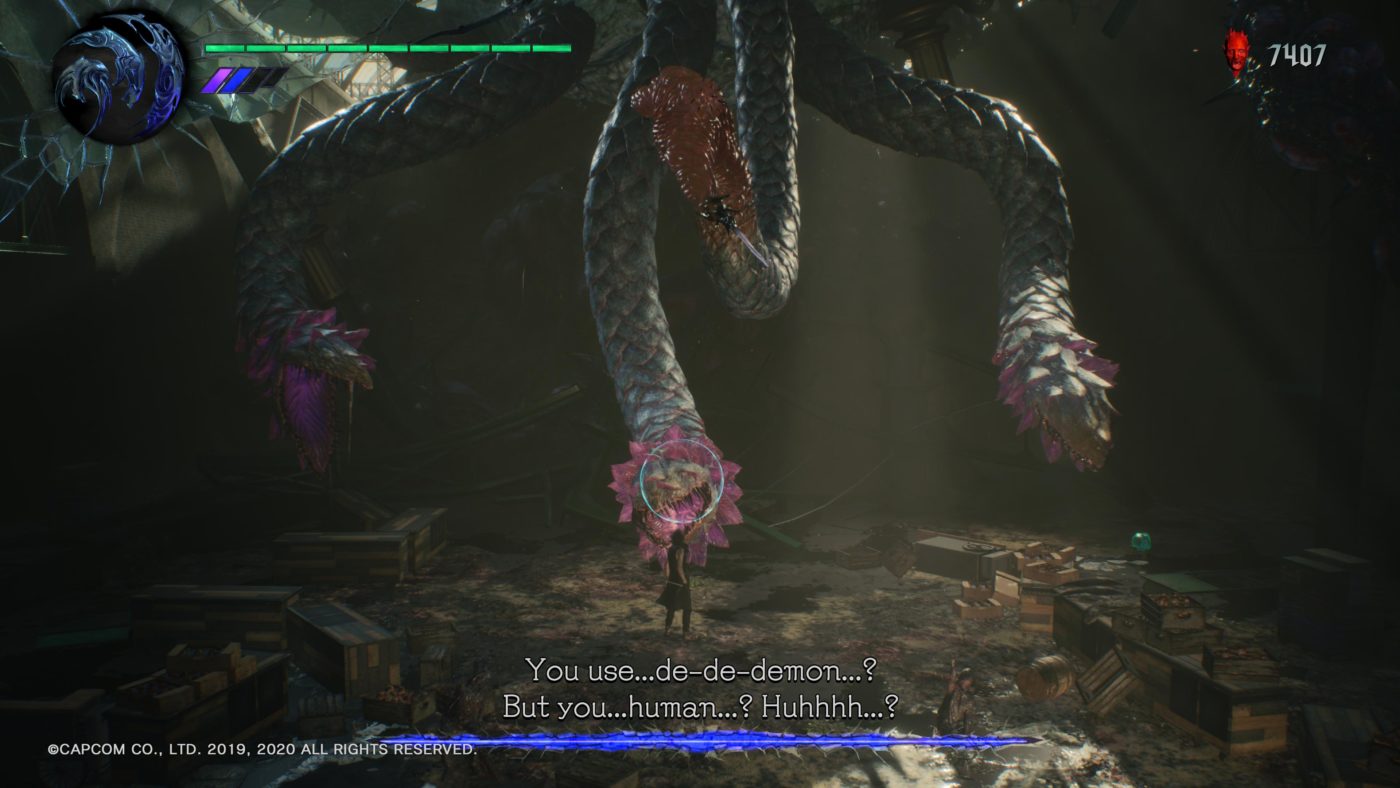 At the end of the day, Devil May Cry 5 Special Edition is a brilliant game. It takes the addictive, intense and stylish hack and slash gameplay of the original 2019 Devil May Cry 5 release, all in the while making some welcome additions to the highly revered title, such as greater performance options, new gameplay modes and a new playable character. It’s story is anime as hell in all the right ways, the soundtrack is littered with absolute bangers, and the impressive visual aesthetic is a beauty to behold. Whether you’re new to the Devil May Cry series like myself or have been invested in the franchise for years, Devil May Cry V Special Edition serves as a game worthy of your time.