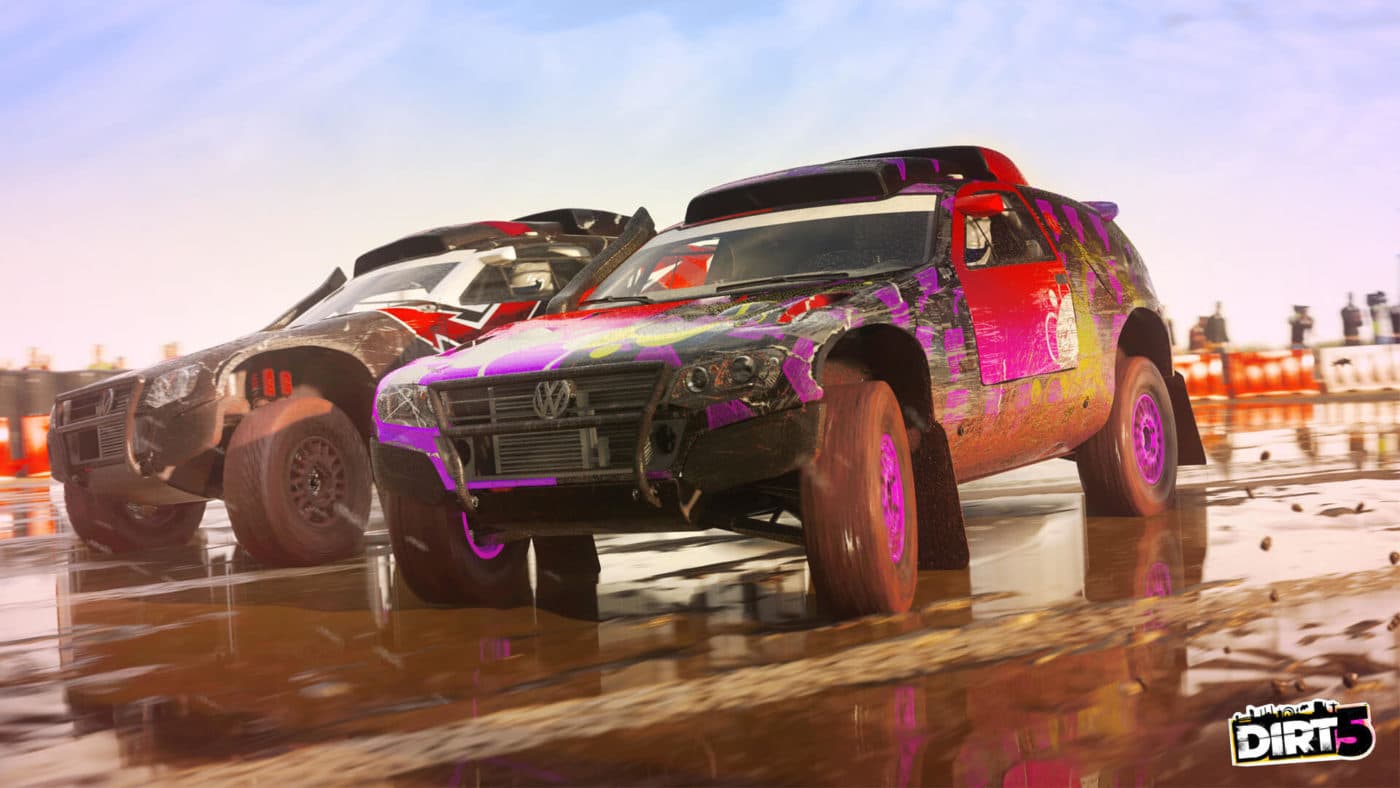 I’m going to be honest here, I’m not at all a car fanatic. I happily drive a crappy old 2002 Ford, and while I can admire the aesthetics of a nice vehicle, I know nothing of the mechanics. I may not be a revhead, but I’ve always had a strong appreciation for racing games, mainly of the arcade variety. Need for Speed, Forza and Burnout are all examples of  series I have long revered. Racing games may not be a genre I’m constantly indulging in, however it only takes a few months of sobriety for the craving to return, forcing me to dive into the latest release. DIRT 5 presents itself as my latest venture into the world of racing, bringing with it a bevvy of content . Is it a racer worthy of your time, or a bumpy road that should be avoided? Read on for our DIRT 5 review.

Debuting for the first time in DIRT 5 is a narrative-driven career mode. You assume the role of an up and coming racer in the DIRT World Series, a racing competition that sees drivers competing in various racing challenges in locations such as Brazil, Morocco, China and the USA to name a few. Under the tutelage of esteemed racer Alex ‘AJ’ Janicek (voiced by Troy Baker), your goal is simple: become the greatest driver on tour. Placing highly in each race that comes your way is the key to make your goal a reality, edging you closer and closer to Bruno Durand (voiced by games voice acting mainstay Nolan North), a competitive and confident champion who stands in the way of your quest for Dirt World Series supremacy.

It’s a basic little story that can easily be overlooked if you’d rather just jump into races and be spared the details, but at the same time it succeeds in providing some character to the Dirt World Series. Instead of playing out in cutscenes as you might expect, DIRT 5’s story is presented through an in-game audio program known as the DIRT Podcast by Donut Media. Donut Media for those of you that don’t is an extremely popular car culture YouTube channel. The podcast is hosted by Donut Media members James Pumphrey and Nolan Sykes, with the highly entertaining and lovable duo discussing what is happening in the world of DIRT in between races. They often speak to AJ and Bruno Durand throughout these podcast episodes, allowing for the personalities of characters you don’t physically see to come to life. Both Troy and Nolan do a great job as they always do, but the Donut Media duo arguably steal the show with their silly dialogue and chemistry. If you care to listen to the simple story DIRT 5 has to tell, you will likely enjoy it, as it does a good job of being a complementary element of the career mode. 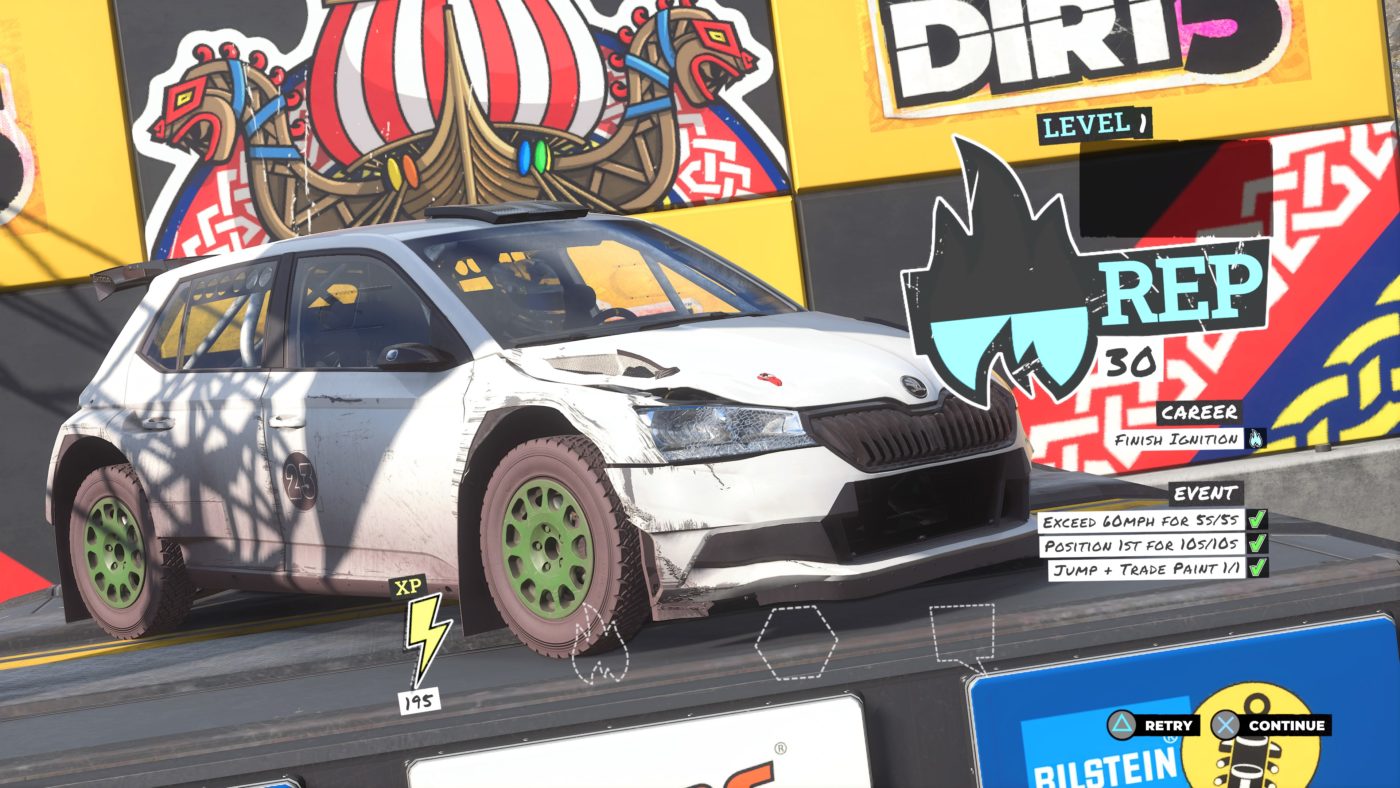 When it comes to playing DIRT 5, the majority of the experience is contained within the Career Mode. There are five chapters to play, with each containing a glut of events to complete. You don’t have to complete every race in a chapter, as there are numerous paths you can take, which in turn allows you to actively skip event types that you dislike (I’m looking at you Sprint Races!). Each race has three stamps to collect. Finishing first nets you three stamps, coming second gives you two, while merely crossing the finish line will reward you with a single participation stamp. Non-racing events such as Gymkhana and Pathfinder give stamps based on the total score or finish time respectively. Stamps aren’t difficult to accrue but you will need to make an effort in nabbing them, as the races at the end of each chapter require a certain amount of stamps to unlock them.

Completing the optional tasks in each level such as performing a certain amount of drifts or overtakes will raise your reputation, which in turn will level up your sponsorship. Sponsors in DIRT 5 serve as an easy way to earn more cash and goodies throughout the game. Signing on with a sponsor will present you with a set cash reward you will earn per race. Completing optional challenges and levelling up your sponsor by earning reputation will up your cash earnings, whilst also earning cosmetic rewards such as decals for your car. The cool thing about the sponsors is that they are actual brands such as AMD, Michelin, and everyone’s favorite, Monster Energy. Sponsorships aren’t really that important, but they do serve as an efficient way to generate money to spend on buying new cars. 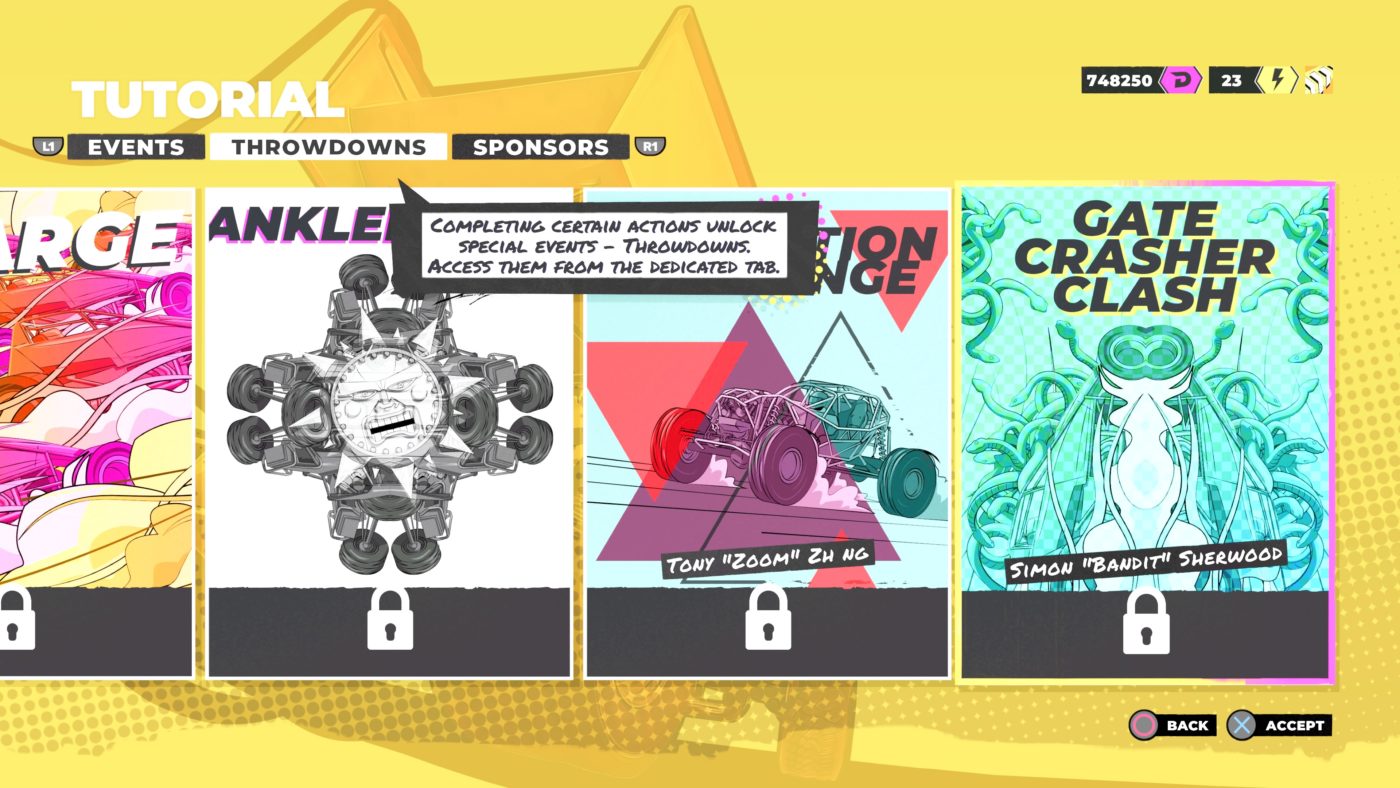 Throughout the career mode you also unlock Throwdowns, which serve as 1v1 challenges that pit you against drivers on tour that want to see what you’re made of. Beating these competitors will get you more money and rewards like player card backgrounds. While you don’t have to play every event to complete the career mode, the fact that there are over 130 events spanning eight different event types is proof that DIRT 5’s Career mode is packed to the brim with content.

When it comes to the eight event types in career mode, I can happily report that there are more hits than misses. Definite high points include Ultra Cross, Rally Raid, Landrush and Stampede, which are all off-road races that feel the most approachable despite their minor variances in terrain and track design. Stampede for example features an unmarked track with areas littered with mud and sand, while Rally Raid offers a more traditional rally experience with jumps and split routes. Ice Breaker despite being a mode I know will frustrate many was also lots of fun, featuring extremely slippery ice courses where near constant drifting is the key to success. The Path Finder mode which debuts in DIRT 5 are also fantastic, forcing you to maneuver a Rock Bouncer amongst heavily mountainous and rock terrain. Modes that didn’t click with me include Sprint and Gymkhana, with my hot take on the latter sure to upset DIRT 3 fans. I think I may just be average at it, but the act of drifting and jumping around an arena to generate a high score simply wasn’t as fun as the races. The Sprint events are just plain bad, with their difficulty to control leading to many frustrating moments where my car would be holding the railing of the course like a kid when they first learn to ice skate. Despite my hatred for Sprint events and mixed thoughts on Gymkhana, DIRT 5 offers up plenty of engaging and enjoyable races with a multitude of different types of cars to take for a spin.

While Career mode is DIRT 5’s main mode, there are still multiple other modes for you to tinker with. Free Play mode which can be found alongside Time Trial mode allows you to customize your own race. You can pick the location, the class of cars, the weather, the number of laps, as well as the amount of drivers and their difficulty. Time Trial mode as its name suggests sees you race a course in an attempt to complete it in as little time as possible. Online allows you to compete with other players online in either races or party games. Racing others is fun of course, but the party games can be a lot of fun if you can get a group together. My pick is Vampire, a mode I can’t help but compare to the Infected mode from Call of Duty games. One car is the vampire and must come in contact with another car to make them a vampire also, leaving those yet to be turned driving away in an attempt to escape. 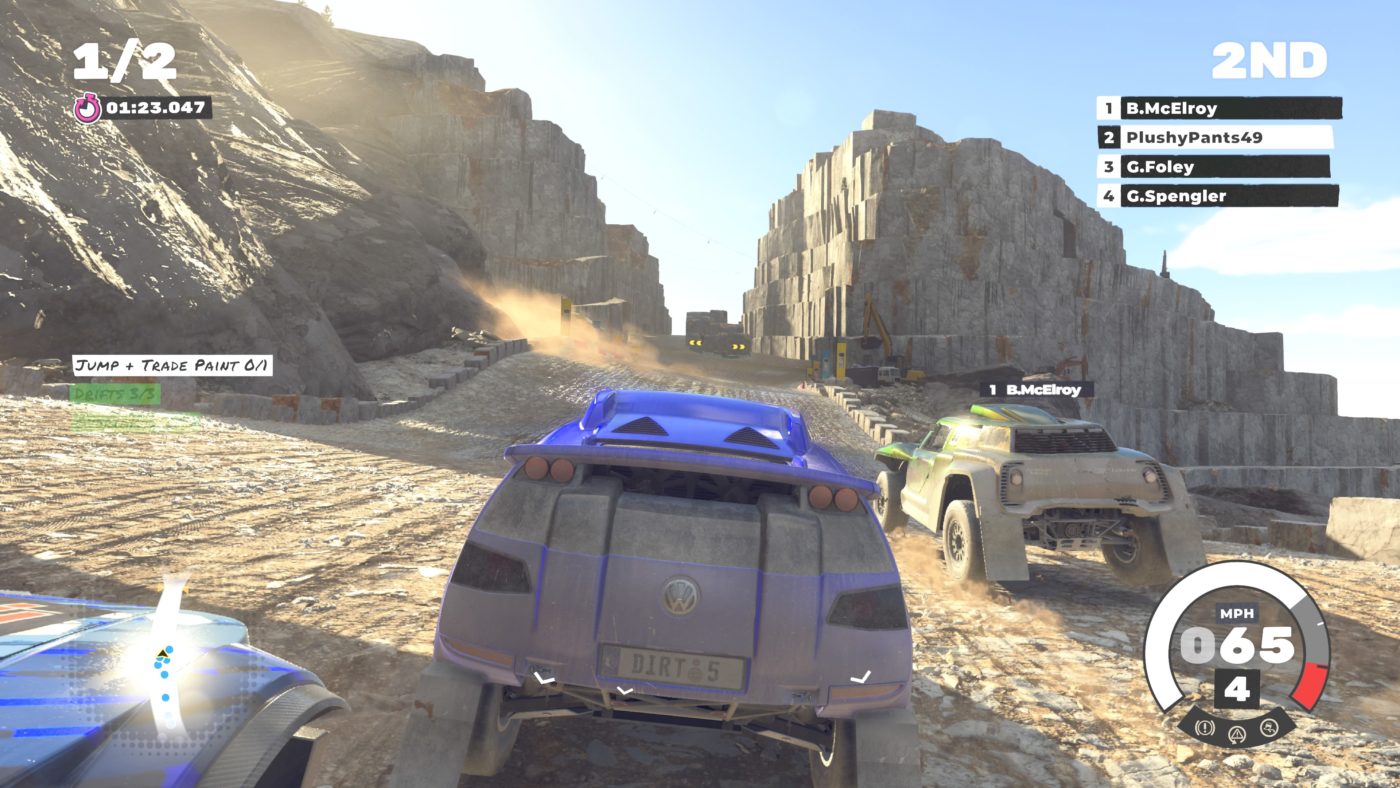 Playgrounds is a mode in which players can create their own tracks to race on and share online. I’m not one to spend much time with the creation tools, but from what I tried, it appears really fun and easy to build a track from scratch. Seeing what the community has crafted already is proof that plenty more life can be brought to the game through this mode. Lastly we have the Garage, a spot where you can purchase and customize vehicles to your heart’s content. I think it’d be fair to say that there is a surprisingly large amount of things to do in DIRT 5.

What’s also surprising is how good DIRT 5 looks on current gen hardware, with the PlayStation 4 Pro version in HDR looking particularly solid in the 30Hz option. The environments while not majorly detailed look pretty enough, and while I’m sure the PlayStation 5 and Xbox Series X/S versions will appear far more attractive, it’s nothing to turn your nose up at. The dynamic weather system is a feature that is cool to see take hold over an environment. A race that begins with clear skies can end with heavy rain, which acts as both a cool visual spectacle and an unexpected obstacle. 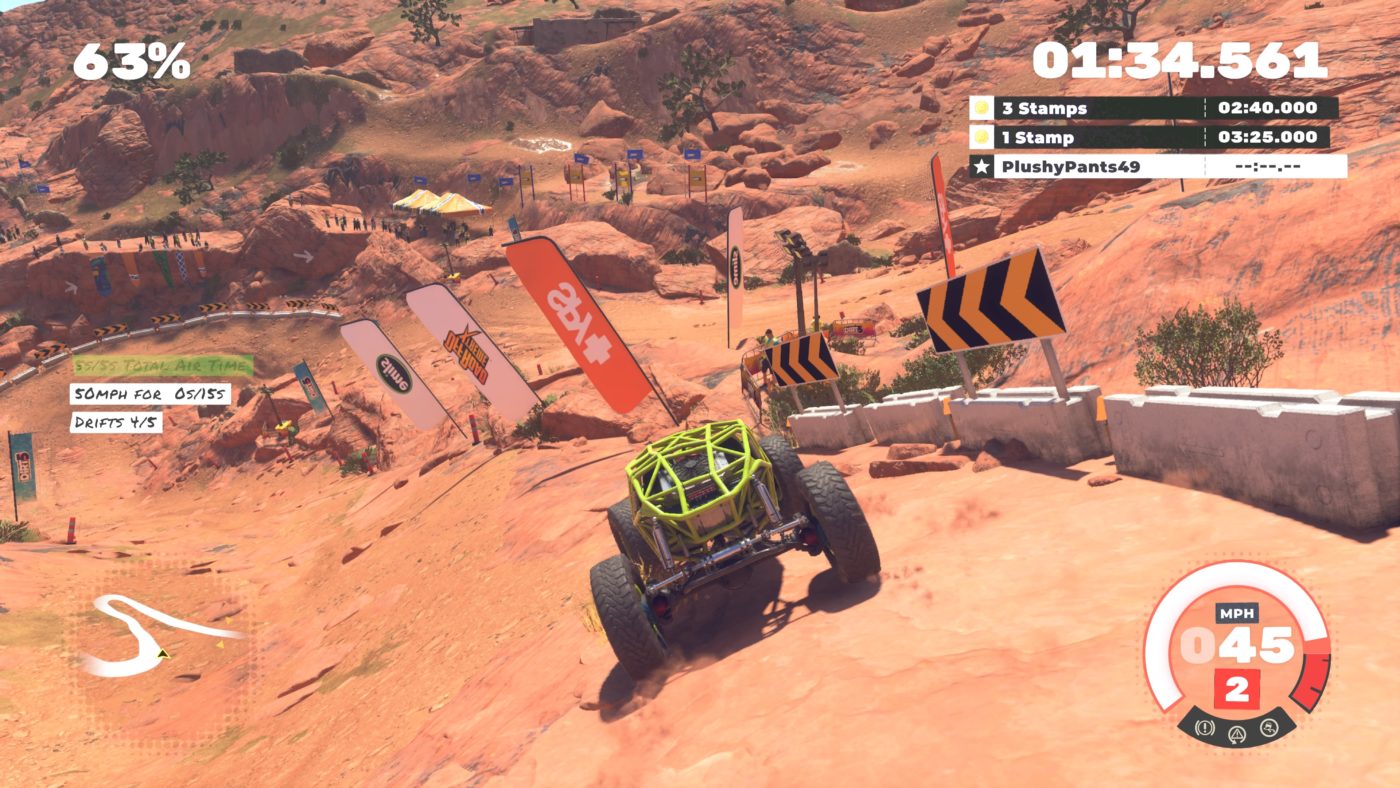 The 60Hz option that prioritizes frame rate over graphical fidelity does a decent job, however I feel it smears the background to the point where the overall look is a bit too smudged and ugly looking. I’m usually the first person to recommend the higher framerate, but I feel sticking with the 30Hz mode is the right decision in this case. I also encountered some screen tearing, frame drops and weird texture flicker in both performance modes which was disappointing. Another minor annoyance were the loading times between each level. They aren’t obtusely long, but the fact that they commonly occur leads to the game feeling like it resides on a loading screen a tad too much.

DIRT 5 is a celebration of off-road racing that is crammed full with plenty of worthwhile content. It’s simplistic story while throwaway for some provides decent fun, and the variety of different racing modes ensure that the long career mode doesn’t get stale. Additional modes such as Arcade, Online and Playgrounds guarantee that even when you’ve cleared the Career that there is still plenty more entertainment to be had. Despite the occasional bumps in the road with performance and lackluster events, DIRT 5 is a great racing title that is deserving of your time.

Dirt 5  review code provided by the publisher. Game tested on the PlayStation 4. You can read SP1st and MP1st’s review and scoring policy right here.

PS4 Update 8.01 Rolled Out, Causing Issues for Some Gamers