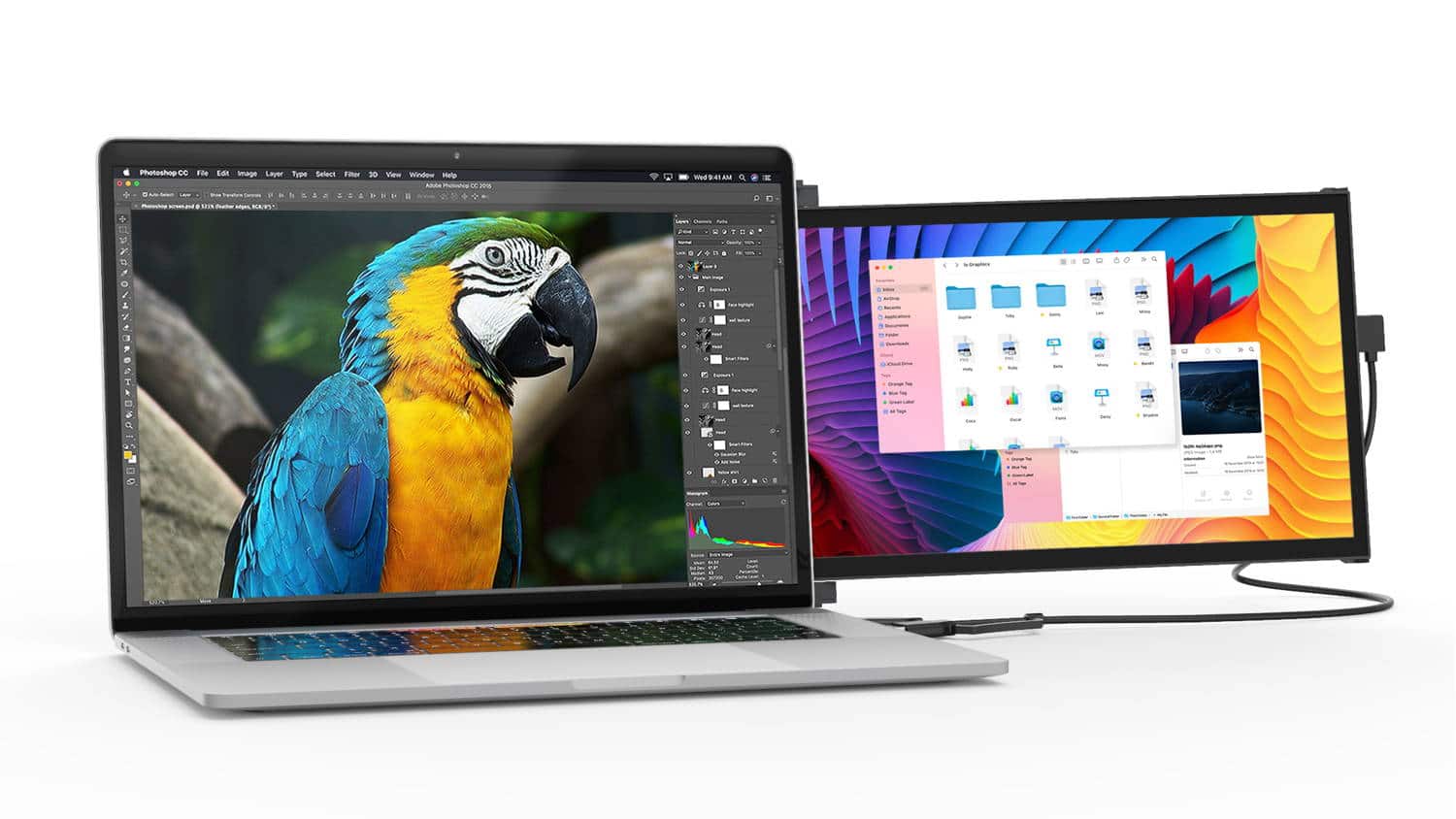 Have you ever wanted to rock that dual monitor setup for your laptop be it for work or gaming? If you’re as curious as we are, then you might want to take a peek at our DUEX Plus review!

We go hands-on with the latest successful crowd funding project, the DEUX Plus, a portable monitor created by Mobile Pixel to finally bring the joy of duel monitor to laptop users.

I’ve been a PC gamer for maybe over a decade now. Not a big one, admittedly, as I prefer my console gaming due to ease of access, but I do have my fair share of PC games, and as of recent have been getting more and more into it. I can understand why PC gamers love PC gaming because there is so much freedom in what you can do compared to a closed platform like PlayStation and Xbox. I don’t think I need to go into all the details as I’m sure most of you have seen some of the rabid fanboys online gloating about the PC Master race, but I get the reasoning after diving more into it.

Now, I will say the one thing I do love about desktop gaming in general is the fact that I can have multiple monitors running at one time. One for gaming or watching a movie, the other for work-related stuff. It’s a killer combo, with my productivity skyrocketing after buying a second monitor. It’s such a huge game changer, and anyone with a PC set-up should get in on it right away.

So what does that have to do with portable laptops? Well a lot, because for the longest time I didn’t actually know there was a company dedicated to making multiple screen set-ups for laptops. The best thing is, they’re built to be as slim as your laptop.

Mobile Pixel is the company behind the DUEX Series, with a TRIO series also available for those looking for even more screens. Today we’ll focus on the DUEX Plus, a single screen monitor that attaches to the back of your laptop using some very strong magnets. 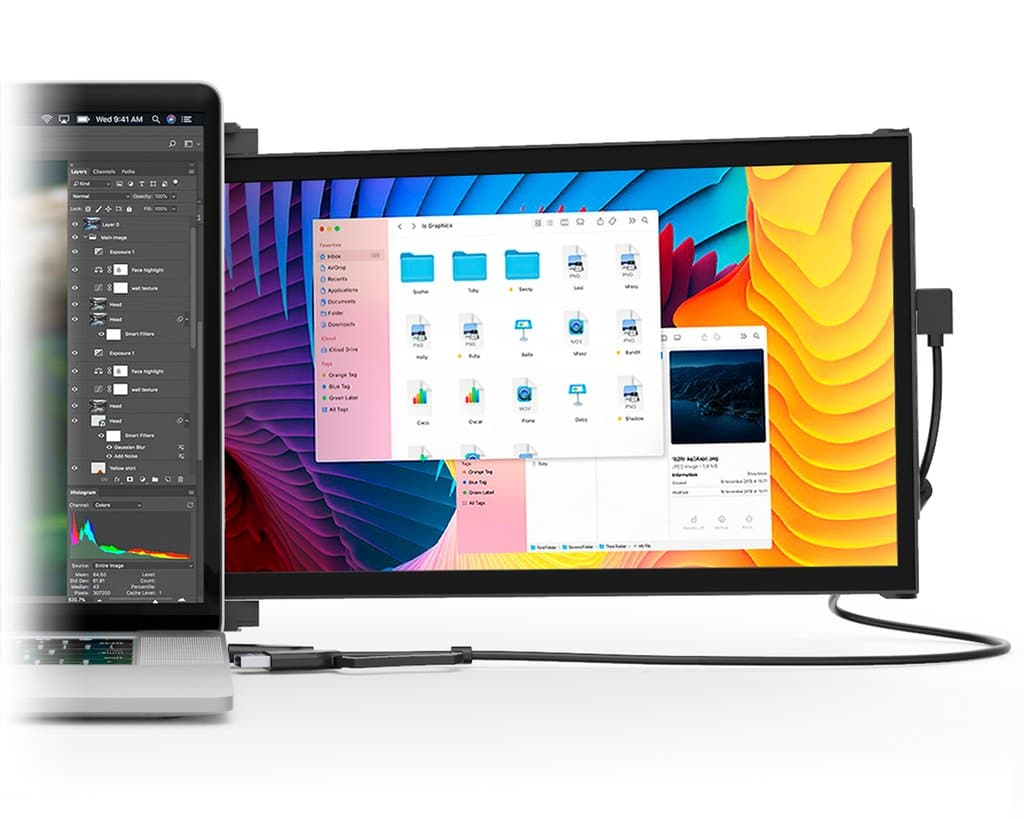 Setting up the DUEX Plus was extremely easy, as all it required was removal of a few sticky strips from the magnets, and then aligning it with the backside of the laptop screen. It’s not rocket science, and it probably took us only a few minutes to get it all done. What’s more, the packaging came with a nifty alignment sheet with some extra sticky adhesive for reapplication should we decide to move it to another laptop.

After, using the supplied USB cable (comes with both USB-C, and USB-2.00 combo), and hooking it directly to our laptop, it only took a few seconds for the drivers to install and recognize that a second screen was plugged in. Just like that, I was all set to improve my laptop experience, and oh, boy, was it improved.

Wanting to step away from my main work station, I decided to head on out with my laptop at hand. I did notice it being heavier due to the Dual Plus being attached to it, but it was just a measly 1.3LB. The thickness was more of my initial concern because I own a very thin work laptop that I didn’t want to add a bunch of bulk to. Surprisingly, the DUEX Plus is insanely thin, and the added “bulk” wasn’t really that big of a deal. It only added a bit more than a pencil amount of thickness, barely anything. The real test was how practical it was actually going to be.

Having set-up shop, it was time to see the DUEX Plus in action. Using the simple built in slider, the DUEX Plus slid out of its enclosure from the back of my laptop seamlessly. There was enough resistance so it wouldn’t just randomly fly out during transport, but easy to pull with light effort. From there everything just worked upon booting up my laptop. I now had two screens I could use at the same time.

That’s pretty awesome if you ask me, something I never once thought about before.  What’s more, while attached you also have a few different orientations. Obviously there’s the side by side orientation that you see above, but if you wanted, you could shift the DUEX Plus so it sits at a full right angle turn, giving you kind of a more private viewing. The other way that I didn’t think much about initially was setting it up so the screen was on the backside of the laptop.

At first I wondered, “Why would I want a screen that I can’t see?” and the answer soon became obvious when my colleagues stood behind me to see my work. I’m someone who just doesn’t like being close to people when I’m working, I just hate that looming feeling. So, instead of them walking up to see what I was working on, I decided to flip the screen to the back and mirror my current one, that way they could see everything going on in my screen without having to move. I’m comfortable, they’re comfortable, and with the last year and half being under a pandemic, I just can’t think of a better way to continue to maintain some social distance in public amongst fellow co-workers. 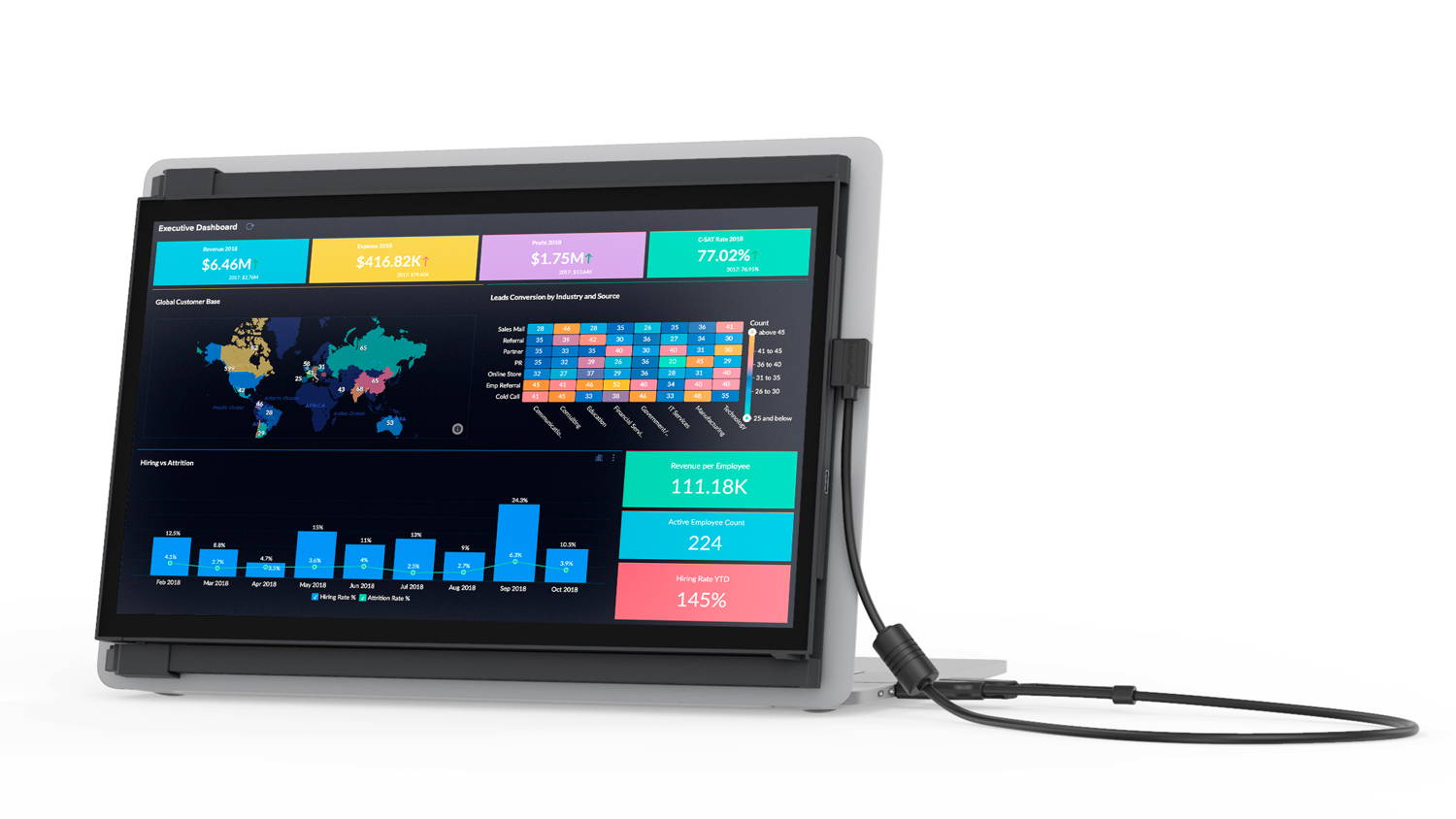 Then there’s the two self-standing options. The first one is portrait mode. I’ve never been a fan of this orientation, nor am I here, but the option is there if you want it. The other self-standing mode unfortunately requires the purchase of the Origami Kickstand ($35). This makes it so you can use it in landscape mode while keeping the monitor appropriately leveled. I mentioned that last bit because you can set it up like that as is, but it’s clearly not built for it as it slopes down.

It would have been nice to be able to have a landscape stand built into the DEUX Plus, but at the same time, either of the orientations kind of defeat the whole purpose of buying one when there are other options, such as the Sidetrack monitor we reviewed months back. Either way, I personally won’t use either modes, but options are great.

I should also mention that you can flip the display from left to right in one effortless motion, with it auto adjusting to the new orientation. I mean, check this out.

As for the overall image quality, it’s good for what needs to be done. The colors come in rich and vibrant with modes also offered to make reading and such easier. I mean, it’s not super crazy like an FHD gaming monitor, but it certainly doesn’t come off as being cheap with a faded picture. I do like that there is no glare whatsoever coming from it, so if you did have it in the right angle orientation, the light from your laptop screen isn’t going to produce blinding glare from the other screen.

Let’s Switch Gears for a Second

In addition to being a secondary laptop screen, the DUEX monitor also fully supports the Nintendo Switch, along with certain android devices. Setting that up is easy as all you need is an external power source (Switch charger works) to power the DUEX and then connect both devices with a USB-C to USB-C cable.

You now have a bigger screen to play all your Switch or android games. It’s not a groundbreaking feature truth be told, nor do we really see someone going out to buy this solely for the Switch, but as I said before having options is always a great thing.

One Thing to Watch For

I’m fortunate enough to own another laptop to test the DEUX Plus out, but just as a fair warning to everyone who may be interested in this, make sure your laptop is flat on the back side of the screen. I had purchased a gaming PC by MSI last year and had hopes that this Monitor would fit nicely on it. Sadly, it didn’t as the laptop had some curves to it that would not allow the sticky magnets to set properly.

This is not the product’s fault by any means, I just want you to be aware of that compatibility issue.

The DUEX Plus is one of those things that you don’t know you want until you get it. Having spent plenty of time using one, I got to say this is easily one of the best inventions for laptop users out there. It’s light, easy to install, and offers huge increases to one’s productivity and efficiency. It will cost you a bit, with this specific model running for $350 USD (13.3 inches), and the Lite $329 (12.5 inches), but it’s money well spent.

The MobilePixel DUEX Plus Monitor is available for purchase at MSRP of $349.99. A unit was provided for review purposes. Product tested for laptops and consoles uses. You can read MP1st’s review and scoring policy right here.

New The Last Orichu Trailer Teases Your Destiny in Wardenia