No one makes games like Josef Fares. He just sees games differently than most creative directors in games. In all three of his games, the stellar Brothers: A Tale of Two Sons (made with Starbreeze Studios), A Way Out, and his latest, It Takes Two (both made by his studio Hazelight), he constantly uses the gameplay that is informed by the narrative and vice versa. These ideas come to a near perfect culmination in It Takes Two. A game that is a blast to play, full of innovation every step of the way, and only comes up short in a few areas and one particularly grating aspect. 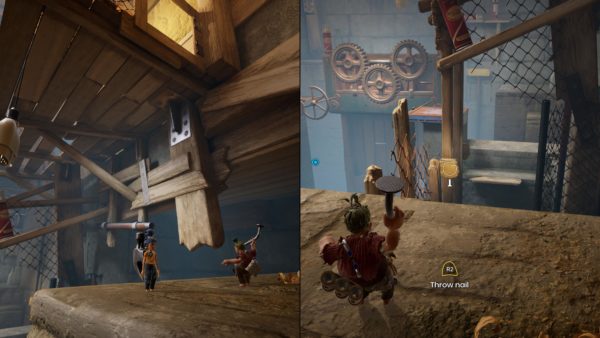 In every Fares game there is some form of cooperative gameplay at the heart of them. In Brothers, while it was a single-player game, the two brothers controlled with half of the controller, each. In his last two games two player co-op is the only way to play. Thankfully, as with A Way Out, It Takes Two has a friend pass so you can invite a friend to download and play the game with you online (or you can also play couch co-op). There’s no matchmaking so you will need to actually know someone who wants to play with you for the 10-12 hour experience.

The narrative of It Takes Two involves married couple May and Cody, and their daughter Rose. May and Cody’s marriage has reached the point where they want a divorce and finally break the news to Rose. Upset by this, Rose takes two dolls she’s made of her parents, May is made of wood, and Cody is made of clay, pleads for them to make up and cries tears that make her parents inexplicably inhabit the bodies of the dolls. In this form they’re goaded by Dr. Hakim, author of The Book of Love that Rose has, into re-connecting and saving their marriage.

In all honesty, the main story is far and away the weakest point of It Takes Two. It feels less earned and more contrived and has a wild omission from the arc as it leads to its inevitable ending. And while the theme of trying to get May and Cody to rekindle their relationship through cooperative gameplay is sound, it mostly feels like the gameplay is informing the story, rather than the story informing the gameplay.

Making matters so much worse is that Dr. Hakim is the most annoying, obnoxious, unfunny character I have ever had the displeasure of enduring in a video game. He speaks in this bad French/Spanish/European accent, gyrates and gesticulates in obnoxious, recoil-worthy fashion, and virtually sucked any joy from my body I was having prior to the moments he shows up. He’s so bad I can’t believe no one in playtesting brought him up as a problem. Both my playing partner (our very own James Lara) and I had the same problem with him so I can’t imagine we are the only ones. 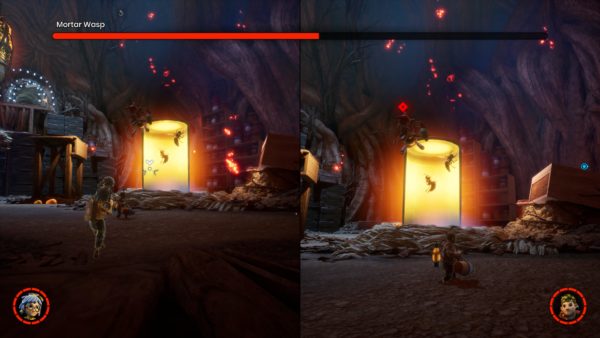 As Good as It Gets

Thankfully the gameplay is so good and varied that Dr. Hakim’s overbearing, dead weight can’t sink the game. The game is so full of genius ideas for co-op gameplay that very few outstays their welcome. There is some standard platforming throughout the game, some less fun than others, but it’s all facilitated through the co-op gameplay. One level has May using a hammer head while Cody amasses a bandolier of nails. Playing as Cody I would throw the nails into yellow pieces of wood to either allow May (James) to swing to other platforms, of the nails would hold doors or platforms in place so May could get to an area to let me through to the next area.

Another area gives Cody a watch that allowed me to manipulate time while May had the ability to make a clone that she can warp to. In one instance there is an eagle statue that has broken apart and fallen through a platform below. By rewinding time, I was able to put the statue back in place, while James placed the clone of May on the floor below, by letting go the eagle statue broke and crashed through the platform and James warped to May’s clone on the fallen statue. I then reversed time which lifted May up to a height where she could reach another platform and open a door that would allow us to progress. The game is full of fun, creative cooperative puzzles like this.

The game also pays homage to other games by turning into a genres, like a fighting game, during an escape sequence. My personal favorite is one I won’t spoil, but I was genuinely elated when it all of a sudden happened, and was actually kind of bummed it didn’t last longer. 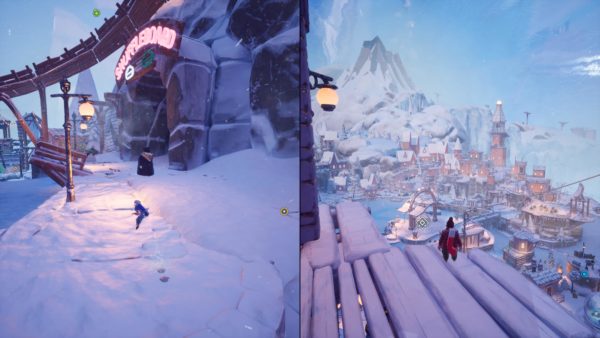 My only issues with the gameplay is that some of the platforming sections require a little too precise of jumping which is always a problem for me in 3D spaces. Others may not have a problem with this but for me it added a slight amount of frustration to a game that seemed hell-bent on putting a smile on my face. Thankfully if you fail a jump, the game has a pretty generous checkpointing system so you won’t ever be set back too far.

An issue that bothered James more than it did me, is that there are a lot of mini-games to be discovered and played throughout. They range from things like Whack-a-Mole, to a game of chess, to a stock car race track and an arcade machine. The fun does vary depending on your personal preferences but they do add a bit of competition into the game that focuses on the opposite through the vast majority of its levels. 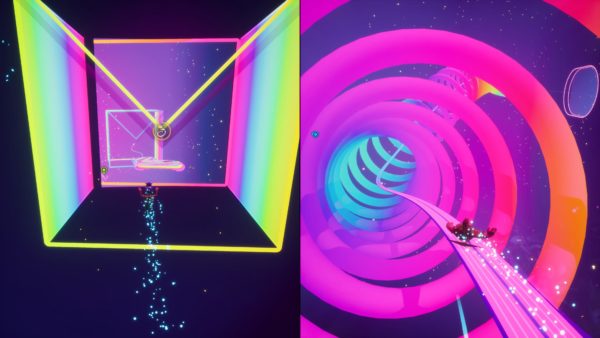 It should be noted that in the visuals department, the game is gorgeous, well, in the actual gameplay bits. The humans don’t look very good at all, and actually kind of look like early PS3/360 era character models. And is it me or is Rose’s head really large for her body? Anyway, each new area offers plenty of visual splendor and are all tied to that specific level’s theme really well. A lot of it focuses on house interior areas but they open up as the story dictates to new and well realized thematic designs. Be it a tree in their yard, to Cody’s abandoned garden, to Rose’s pillow fort, there’s a lot of variety here.

The sound design is also excellent. While the voice acting isn’t my favorite, mostly do to the histrionics of the performances, the ambient sounds, score and event the sounds of specific items (such as the various snare tones in a section where you jump on and interact with musical instruments), it’s all impeccably rendered.

I should also note that the game is incredibly polished. We didn’t experience a single glitch or bug and the controls were smooth and simple to understand and use. It’s clear a lot of care went into making sure the experience was as fun as possible.

And at the end of the day, that is what stands out in It Takes Two. It’s fun. The game is effortlessly fun. While the marriage of gameplay and story wasn’t what I had hoped – I wasn’t ever really invested in May and Cody’s relationship – I was constantly having fun playing it. And for me, that is what matters most. Highly recommended.

It Takes Two review code provided by the publisher. Played on PS5. You can read SP1st and MP1st’s review and scoring policy right here.