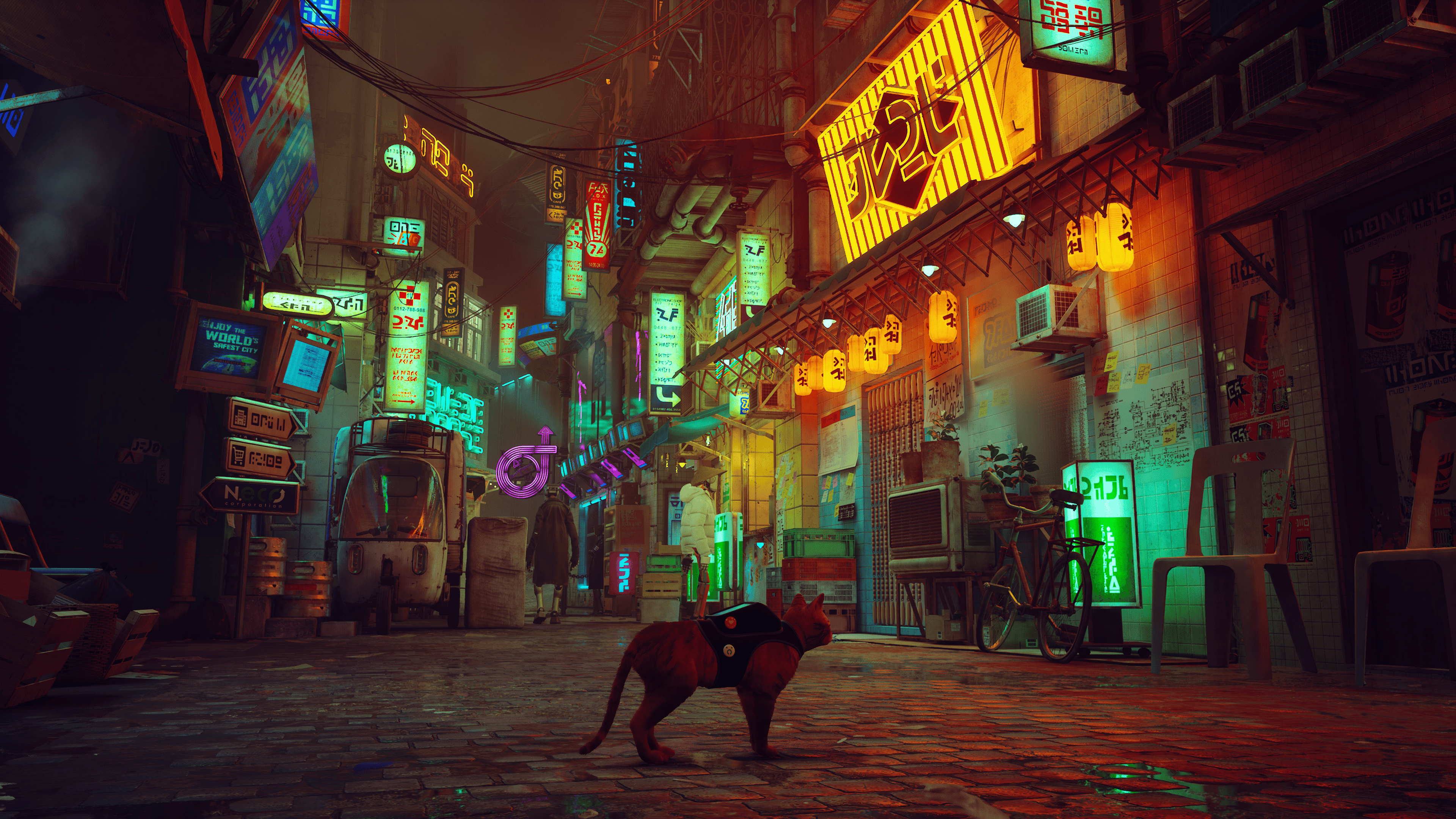 First announced at PlayStation’s “Future of Gaming” event in 2020, Stray is a game that immediately caught the attention of many PlayStation fans. The premise is a simple one, but also pretty unique. You play as a cat. But is it possible to take such a simple premise and turn it into an engaging and meaningful experience? Indie developer BlueTwelve Studio have proven that the answer is a resounding yes.

Stray drops you into a cyberpunk-themed world based on real world Kowloon, with the simple goal of escaping with as many of your nine lives as possible. As you dive deeper into the  adventure, you learn more about the history of this mysterious world and how it came to be. And this world is one of the highlights of the entire game. The levels are meticulously designed, and every inch of this game is packed with detail.

Although Stray is a fairly linear game, there are multiple hub worlds placed at different points throughout the story. You’ll have the opportunity to freely explore these areas and speak to the residents there, who will sometimes offer you simple side quests, rewarding you with collectibles and additional backstory. In one early example, a local guitar player asks you to find him more sheet music around the village. Each one unlocks a short cutscene and a new tune for him to play as you catnap next to him. Side quests like these, while simple, really add to the charm of the game and are a nice break from the main story. 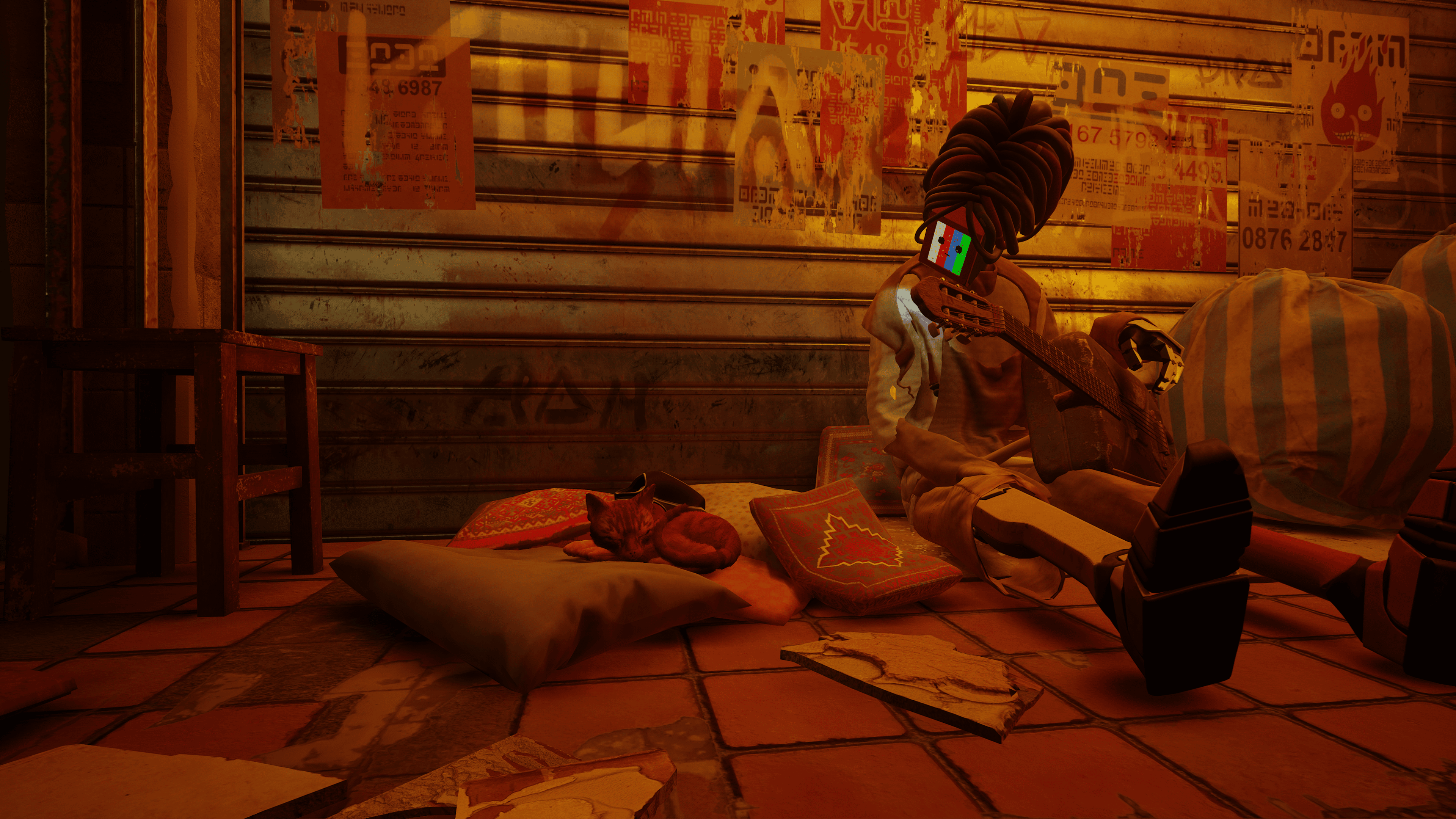 Crucially, these semi-open world areas feature no objective markers or waypoints telling you where to go or where to find collectibles. Stray’s world design takes me back to generations past, before everything was marked on your mini-map telling you exactly where to go. In fact, Stray doesn’t have any maps whatsoever. Admittedly the areas aren’t that large, but with the amount of detail in them, it would almost feel like a disservice to blindly follow objective markers. Stray wants you to explore and get into mischief, as any real cat would. Whether you’re doing a side quest or trying to progress the main story, everything is found naturally. The only small semblance of guidance you’ll get is by asking your AI companion B-12 for hints on how to progress the main story. Outside of that, it’s down to you to explore and speak to people in the area for clues on how to find those elusive items.

And you’re going to want to explore thanks to this beautifully crafted world. Simply put, Stray’s visuals are stunning. The gorgeous lighting system bathes everything in a bright neon light and the use of color in this game is excellent. There’s a deeper meaning behind these colors as well, as you may discover if you explore enough early on. Naturally, pretty lights need pretty reflections and all of it it is reflected beautifully in the puddles that coat the streets, and in the hazy fog that covers most of the game world. Stray is a fantastic looking game, not just technically, but stylistically as well.

Stray features just one graphics mode on PlayStation 5, which runs at a dynamic 4K resolution at  60 frames-per-second. Despite the high visual fidelity, performance is rock solid. There’s been some confusion about ray tracing, but from what we could tell there does not appear to be any ray tracing features on PS5 – but the lighting and screen space reflections are done so well that you probably won’t even notice. The settings menu overall is pretty sparse – just a simple brightness and motion blur slider for graphics settings, and options for changing sensitivity and rebinding buttons in the control settings. But even at default settings the game still looks and feels great, so this wasn’t really a problem. Sadly, there’s no photo mode in the game at launch which is an absolute crime given how incredible it looks. 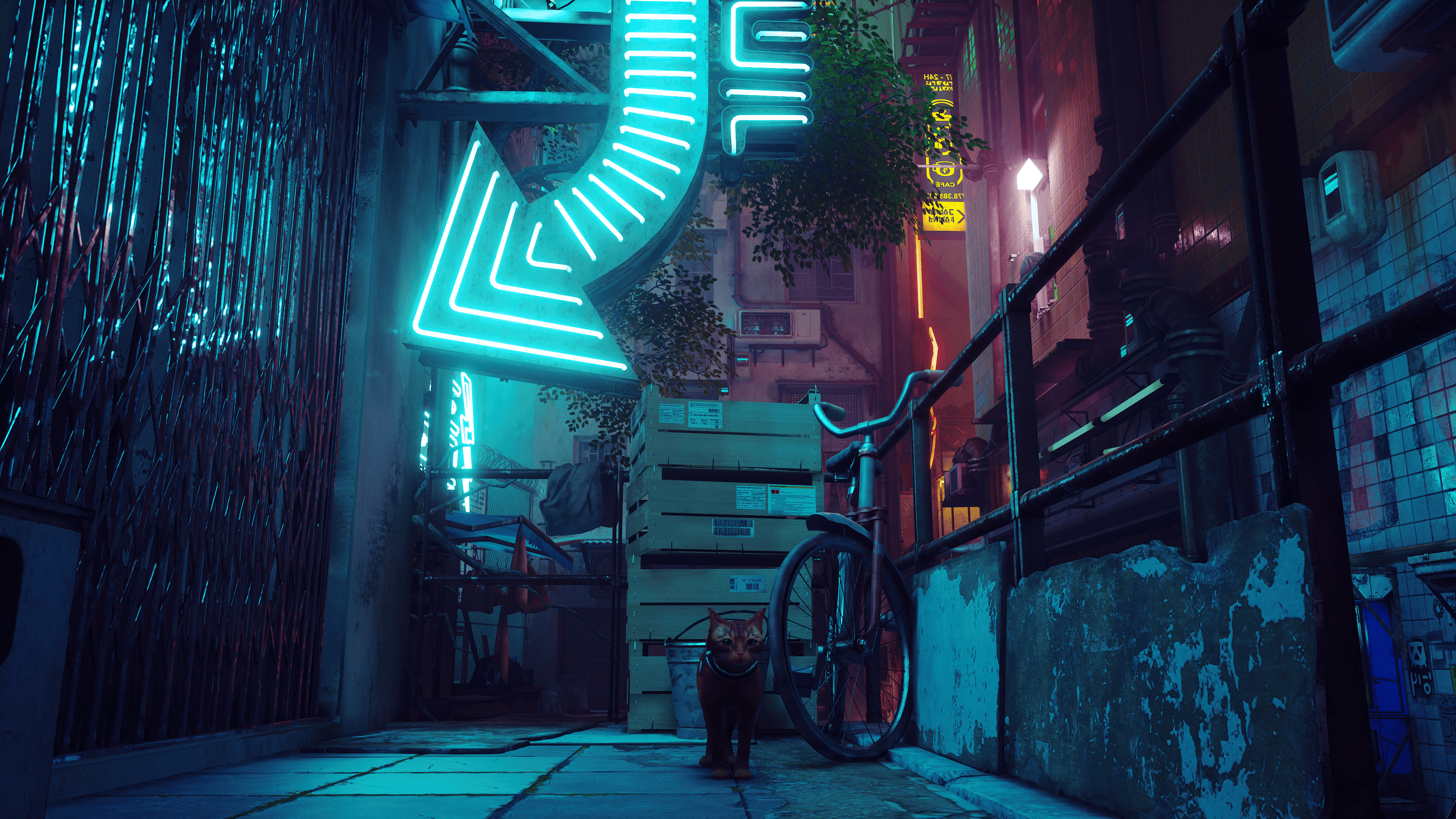 So what do you actually do in Stray? Aside from the novelty of playing as a cat, you’ll go on an adventure through different parts of the world, platforming, puzzle solving, and occasionally even fighting your way out of tough situations. There are some stealth sections too, which get more and more interesting as the game goes on. On the whole, it’s not a very difficult game. The puzzles are fairly simple, and the platforming basically just amounts to you jumping from ledge to ledge. Some of the later stealth challenges might definitely take you a few tries, but if you’re looking for a challenge you may be better off booting up something like Elden Ring.

Of course, the elephant in the room is that you play the entire game as a small, four-legged cat. BlueTwelve Studio definitely haven’t let this opportunity go to waste. I was surprised at just how much Stray makes you feel like you’re a cat. Aside from the much-advertised “meow button” which can be pressed at any time to let out a cute little meow, there are items strewn throughout the game you can interact with to do various feline activities. You can scratch at walls, sofas, and other objects by pressing the L2 and R2 triggers (which I highly suggest doing if you’re a trophy hunter). You can stop at various locations throughout the world to take a catnap, which slowly zooms out the camera and gives you a nice wide shot of the area, usually accompanied by music or other ambience. And there’s nothing quite as satisfying as knocking over a bucket of paint just because you can – and because that’s just what cats do. With little touches like these, the developers really try to make it clear that you aren’t just playing as a person in a cat’s body, you are a cat. 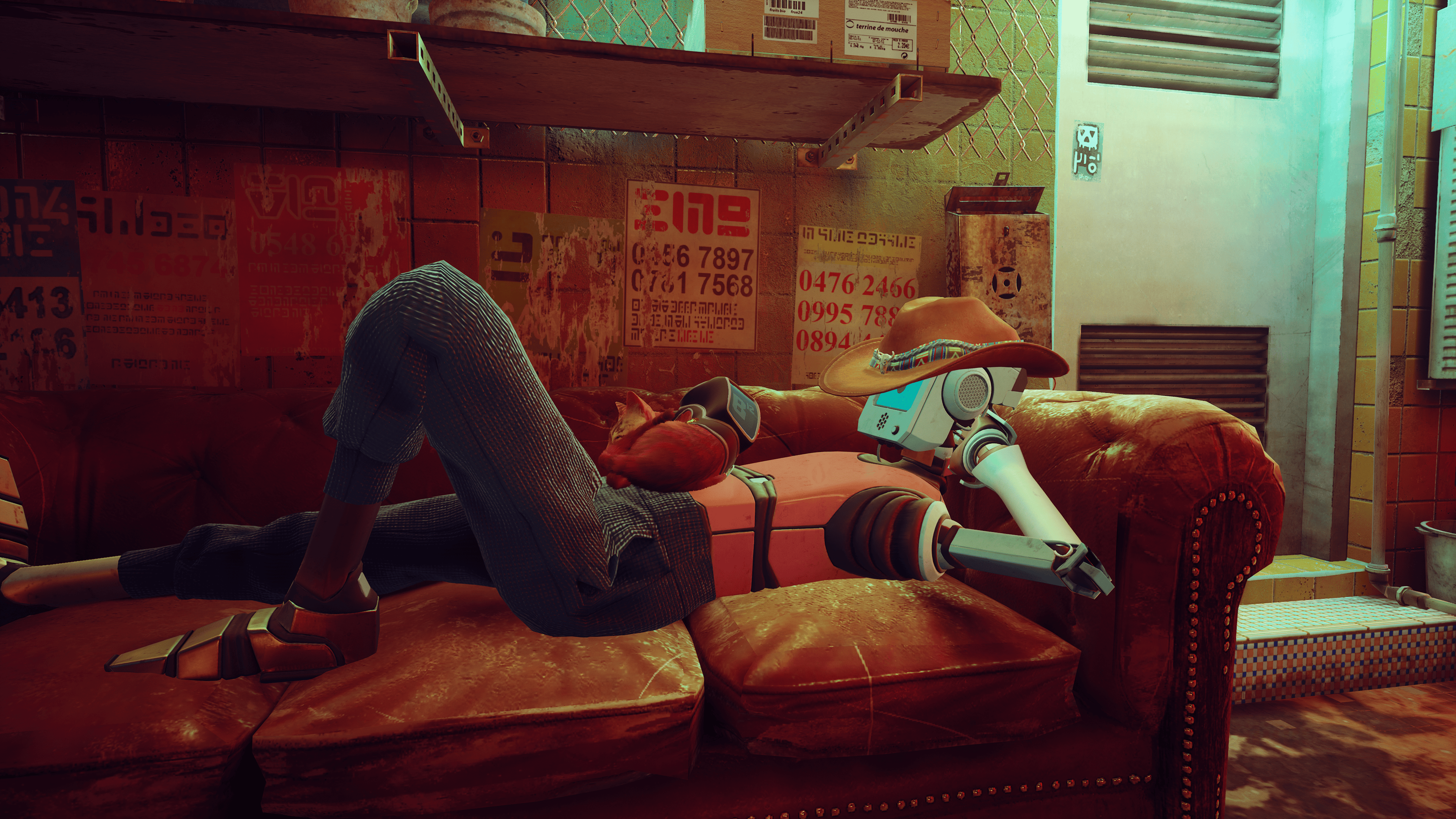 With pretty basic gameplay, the story has to be good. Thankfully, Stray delivers on that front. The characters are surprisingly well written and there are some genuinely emotional moments throughout the game’s 6 to 8-hour duration. Quite an impressive feat considering the game’s protagonist doesn’t speak at all, and that most of the game’s characters are robots. I grew very attached to one character in particular which I won’t spoil here. You’ll meet up with a gang of outcasts known as The Outsiders, who have made it their mission to escape the world they were born in. Each one has a unique personality and backstory, and each of them will assist you as you try to do the same. Of course, this isn’t some huge overarching story with lots of intertwining threads and story arcs. But it’s a charming one that hits on all the right notes. Stray’s story is one that’s simple and effective – and also surprisingly tense at times.

Lastly, I want to highlight the fantastic soundtrack and audio design in this game. The soundtrack blends together aspects of electronic music, jazz, and lo-fi to create a uniquely chill vibe that fits the game perfectly. The 3D audio on PS5 is mixed superbly which adds quite a bit to the game’s immersion. The DualSense features are also implemented well, although somewhat sparingly. Perhaps the best DualSense implementation is the deep, rumbling haptic feedback you get when the cat purrs which feels exactly like the real thing. As a PlayStation console exclusive, and one that was originally revealed right alongside Sony’s big next generation machine, it should be no surprise the PS5 features are implemented so well, but the soundtrack and 3D audio in particular go above and beyond. 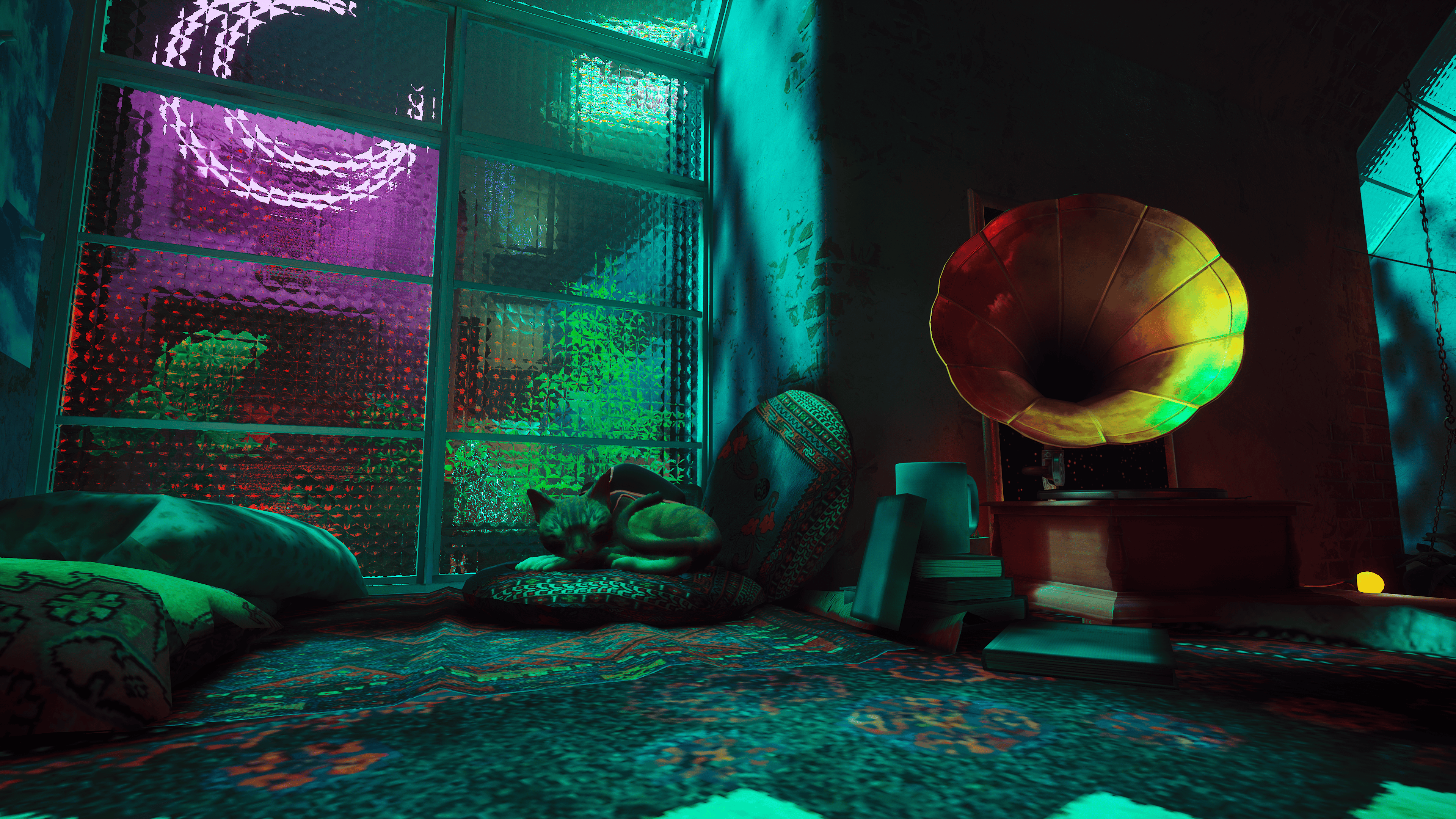 Stray knows exactly what it wants to be and delivers on that premise flawlessly. Despite the game’s short duration, it leaves a strong impact, and it doesn’t overstay its welcome. Although the gameplay is simple, it’s made up for by the game’s stunning world, charming story, beautiful soundscape, and immersive atmosphere. Developer BlueTwelve Studio are punching well above their weight with the game’s visuals, and thankfully it’s delivered in a virtually flawless 60 fps on PS5. Stray is absolutely worth checking out, particularly if you’re subscribed to Sony’s new Playstation Plus Extra or Premium services. For me, it’s one of the most memorable experiences of the year.

Train Sim World 2 Update 1.88 Chugs Out for Fixes and DLC Prep This July 18