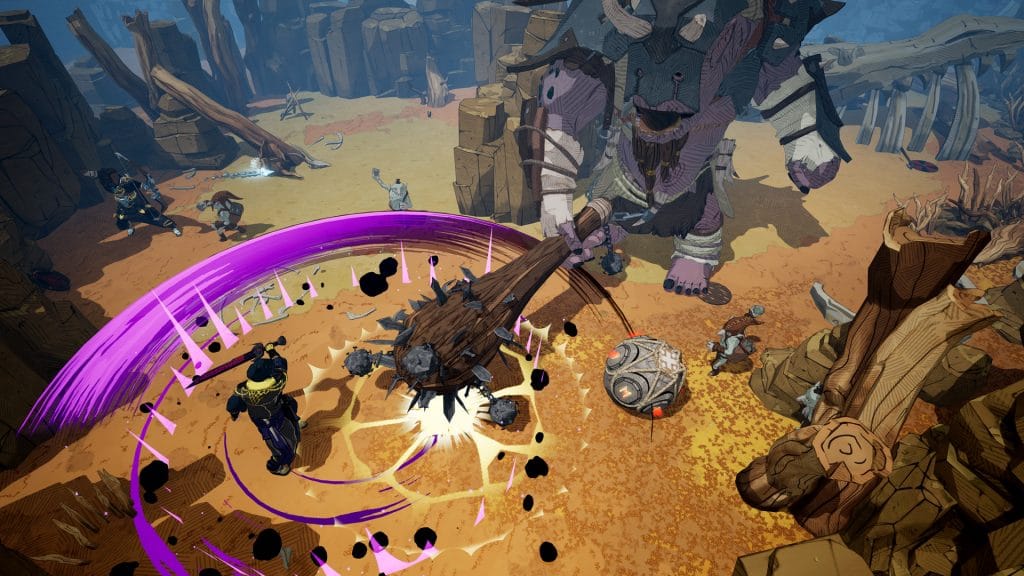 What is Tribes of Midgard? A survival game? A horde mode style game? Roguelite? City defense? Hack and Slash? The answer, all of those and developers Norsfell does a fantastic job at blending all the genres into one enjoyable co-operative experience. If you’re curious what kind of game it is, or more importantly, if it’s a game worth paying and playing, then read on for our Tribes of Midgard review.

Taking place in a Midgard village, you start your journey off as an underwear wearing Viking whose sole purpose is to protect the seed of Yggdrasil, or more commonly known as the World Tree. By day, you’ll scavenge the large open world, solo, or with up to nine other players in hopes of getting stronger, building better defenses, and preparing for the imminent doom of Ragnarök. That’s the gist of it, and if you go in expecting some heavy, world-building story then you’ll end up feeling a bit letdown.

However, that’s not what Tribes of Midgard put itself out as, but instead as a massive, almost survival MMO-ish open world where teamwork is an absolute must.

My journey into the world of Tribes of Midgard starts me off in the Saga mode, the game’s main beef. While solo play is entirely possible, Tribes of Midgard does empathize that playing in co-op is a sure way to victory as the mode has some intensely leveled beasts and other challenges.

Similar to many other survival games, you will immediately set off into the world searching for resources and rare loot to better yourself. However, unlike most survival games you don’t have to worry about random players showing up and striking you down on sight as everyone is working together towards the same goal; protect the seed of Yggdrasil at all cost. 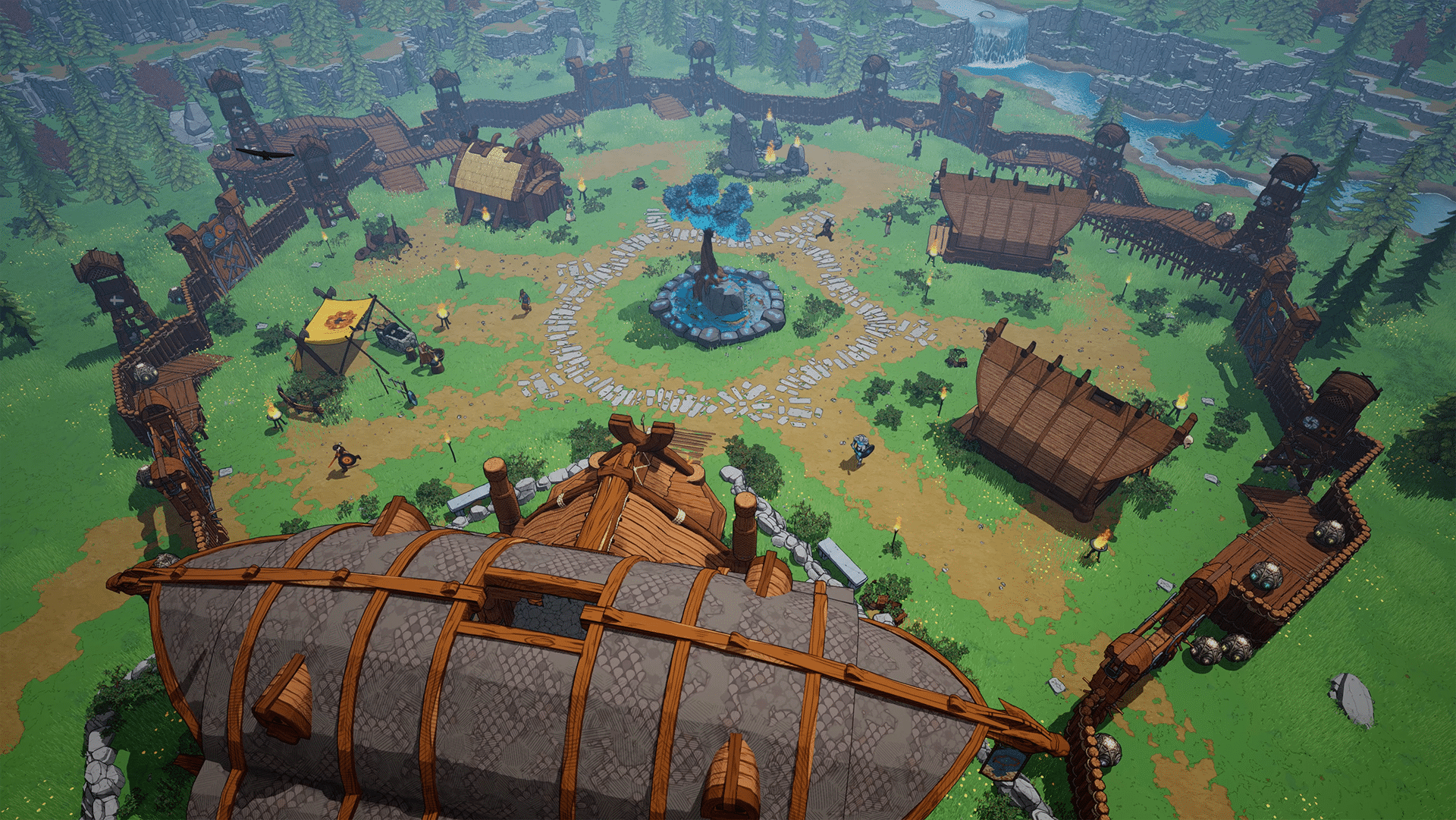 As someone who is all too familiar with the survival genre, and by that I mean I’m no fan, I thought it was a nice refreshing change knowing that the player nearby was likely going to help rather than rob me of all my loot, and leave me as a nude corpse rotting in the middle of nowhere (looking at you, DayZ survivors).

Instead, in most matches I played, everyone journeyed with one another, tackling the many foes in the world, and earning some high level gear. There’s no PvP, and soon after a full day (in-game) nightfall fell, and it became abundantly clear why there is so much focus on the co-operative aspect.

At night, demonic Helthings spawn and the game quickly goes from being a scavenging survival, to a city defense. Hoards after hoards of these creatures swarm the town, hoping to kill off the world tree and thus bringing the end of Midgard.

The first couple of nights aren’t so bad as long as everyone sticks together, but as each passing day goes, the difficulty quickly ramps up. This includes throwing massive, stalking giants known as Jotnar who slowly make their way to the village. They’re tough, but so satisfying to defeat.

Eventually, when you hit Day 14, the match will enter a state called Fimbulwinter, which is a very cold endless night mode. You’re probably going to die, as this essentially serves as the end of all things; though if you’re strong enough, and have a full team equipped with the right gear, you can probably survive a good couple of days. There are some rewards even tied to surviving for long durations.

It sticks with the Norse Mythology, as Ragnarök is supposed to be the end of Midgard, only for it to start over again. An endless loop just like Tribes of Midgard. So survival isn’t really the end goal here, but instead taking on what the game calls “Saga Quests.” 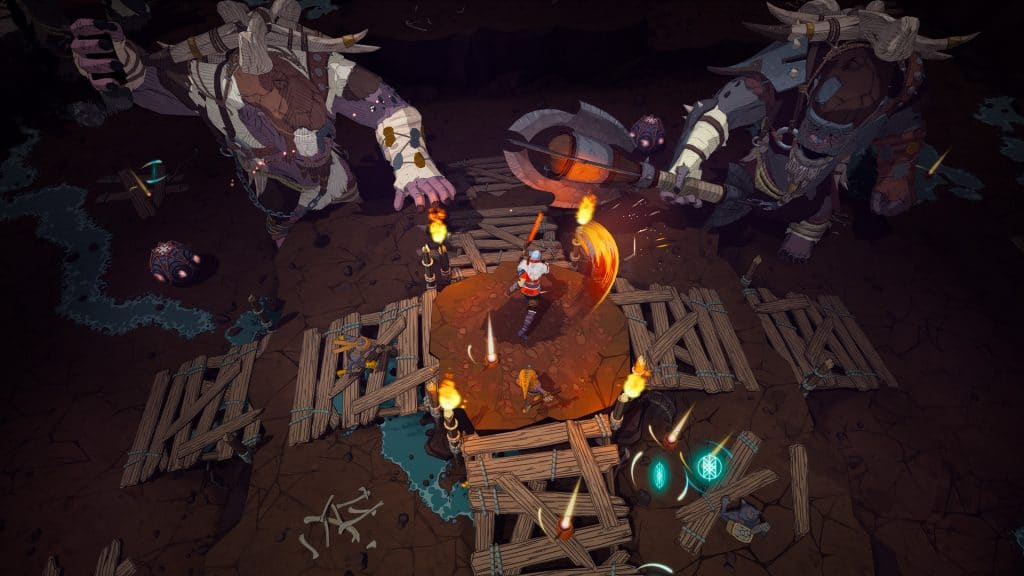 Saga Quests are seasonal, with the first one being tied to the Norse beast Fenrir — a giant wolf who is prophesied to swallow the sun. To get to him you will need to complete a series of quests, and collect a large amount of resources in order to build a bridge to his secret lair. Once you do, a rather difficult battle will ensue, and if you’re equipped for it, you’ll find it to be a very satisfying fight.

Saga Quests are a very interesting way to keep the game fresh with worthwhile content. They take a long time to complete, but the reward earned is well worth the cost.

I will say, I am curious how Norsfell will address past Saga bosses once a new season begins, as I assume it means they will rotate them out, though I’m hopeful past ones stay as optional bosses you can take on during other seasons.

As for what else there is to do in the realm of Midgard besides collecting badass gear and slaying worthy foes, players can also take up a number of side quests offered from the village board. These aren’t all that interesting if I’m honest, as they mostly revolve around killing X enemy, or gathering and going to X location, but they make sense in the long game due to how time restrictive it feels, which does bring me to one of my gnawing annoyances. 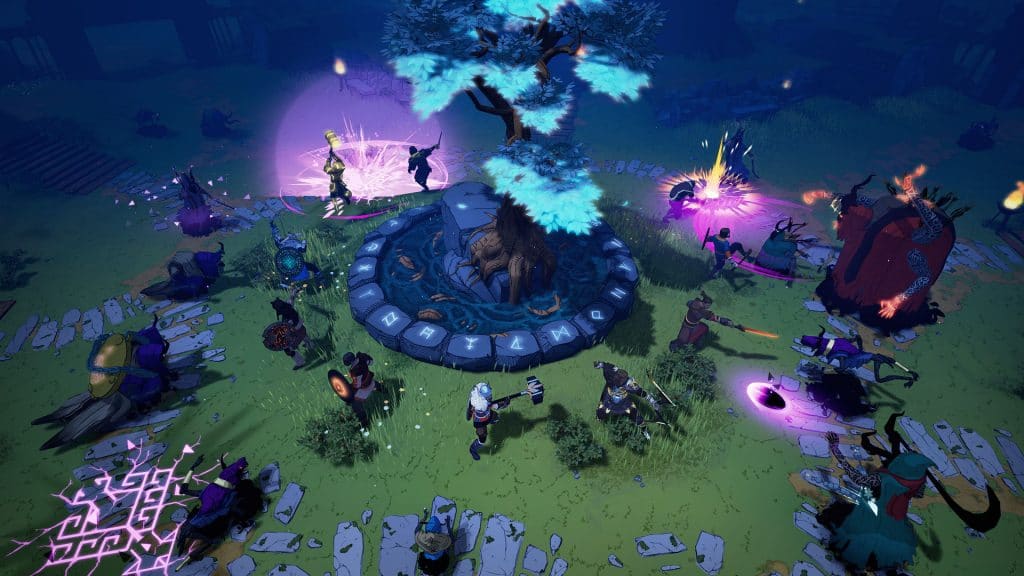 I will say the biggest issue that players are going to notice is the sense of urgency. For as big and diverse as the world is, it sure feels like you don’t get a lot of time to explore it. And I’ll admit there isn’t a whole lot going on in the world outside of bandits and monsters lurking around, but that’s a bit part of the fun looking at these new areas in hopes of finding some good loot.

I always felt like I had to keep on going with on-going tasks in order to stand a chance in those night battles. I think a bit of tuning to how long the days are could do wonders, but at the same time I can understand wanting to keep matches within a reasonable time.

At the very least, Tribes of Midgard does have a second mode called Survival, which does allow players to have an endless amount of time before taking on the difficult task. In fact, while this mode can be played with other players, the solo adventurer will definitely resonate with it more as it’s completely customizable. 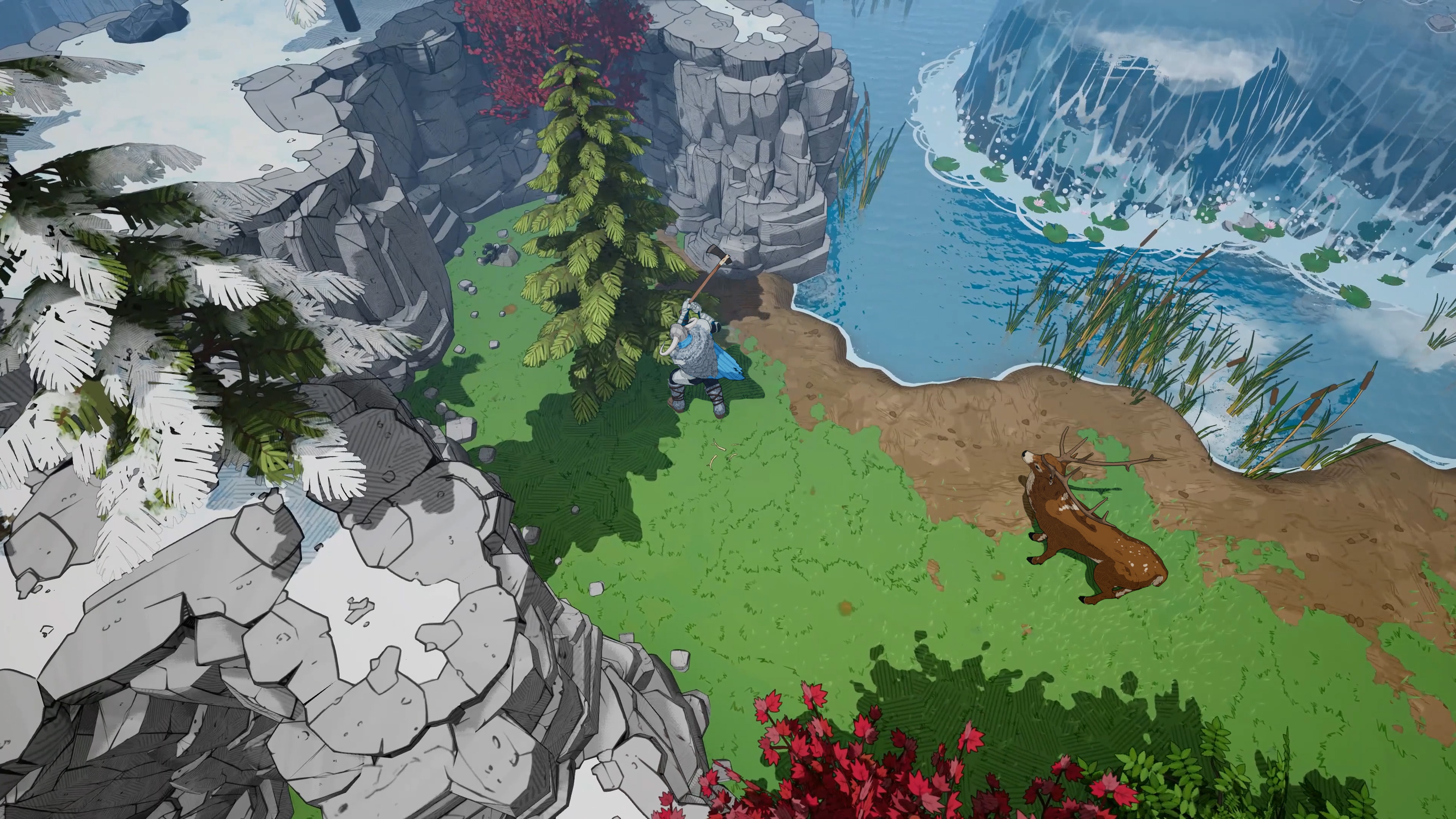 You can change the map size, enemy difficulty, amongst other options. I personally loved this mode a ton, though I did find myself still playing Saga Mode for the more hectic action-filled gameplay. That’s not to say Survival doesn’t offer a challenge, it’s just a whole lot more manageable, especially in solo play.

In fact, I think Survival mode is an excellent way to familiarize yourself with the many classes available. In total, there are eight classes, some available from the very start while others require specific perquisites to unlock. For the most part these classes are the standard archetypes that you can expect from an ARPG-like title, and I found them all to be fun.

I played mostly as the Berserker because I really liked the explosive abilities the class had. There are tanks, range, and even caster-based classes. Again, most classes you find in other ARPG are present, though don’t expect them to be quite as deep, but nonetheless, they were all fun and enjoyable to use.

If you’re looking for something fresh, and fun to play with friends then Tribes of Midgard is the game to play. While it is a bit light in content at the moment, what Norsfell Games have created here is one beautiful mashup of different genres all in one package. While it’s not innovating, it certainly feels like a refreshing take.

I’m excited to see what the future holds for Tribes of Midgard, and hopefully it’s one that leads to the gate of Valhalla.
Score: 8/10

A review code for Tribes of Midgard was provided by the publisher and played on PS5. You can read SP1st and MP1st’s review and scoring policy right here.