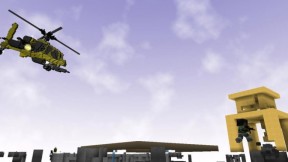 News 9 Indie developers Exato Game, whom are the team behind the voxel-style shooter Guncraft, have unleashed a new trailer that showcases the various guns, maps and items that the Guncraft community have created with the gunsmithing tool, voxel importer and level builder. Check out their creations in the video below: Guncraft blends the competitiveness of the FPS […]

News 8 Indie developer Exato Game Studios has announced today that their voxel-based shooter Guncraft will be launching on Steam this August 9. Melding the competitive FPS with the block building sandbox experience, Guncraft “challenges players to build maps, characters, and weapons on the fly, then decimate them all to take down enemies across nine different game modes […]