News 0 Xbox gamers, this week’s Xbox store sale for the week is now live! Otherwise known as Deals With Gold, the Spotlight Sale along with this week’s discounted games can be seen below. Xbox One Deals    CONTENT TITLE CONTENT TYPE DISCOUNT NOTES 20XX Xbox One Game 40% Spotlight Aces of the Luftwaffe – Squadron* Xbox […] 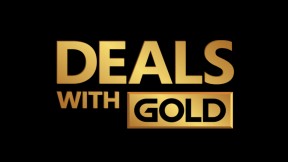 News 0 With the holidays now officially over, some people might have some extra cash lying around, and if you do, you might want to consider checking out the Xbox Deals With Gold this week! The deals below are valid until January 7, 2019. So get them while yo still can. CONTENT TITLE CONTENT TYPE DISCOUNT NOTES […]

News 0 In case you have extra cash lying around, or just want to snag something on the Xbox Live Marketplace, Microsoft has revealed the Xbox Deals With Gold for the week! Check out the full list courtesy of Major Nelson. Don’t forget, discounts are live until Tuesday, November 6, 2018.      Xbox One Deals CONTENT TITLE […]

News 0 This week’s Xbox Deals With Gold has been posted, and there’s a spotlight sale plus publisher sale for Xbox gamers! Check out the full list for this week’s offerings below (via Major Nelson). Xbox One Deals CONTENT TITLE CONTENT TYPE DISCOUNT NOTES Adventure Time: Pirates of the Enchiridion* Xbox One Game 25% DWG Alekhine’s Gun* […]

News 1 Xbox fans, your day of sales has come. This week’s Xbox store sale listings are up now. Larry “Major Nelson” Hryb has revealed this week’s Xbox Deals With Gold offerings, and there’s a lot of Grand Theft Auto V in it. Same as before, don’t forget that you need to have an active Xbox Live […]