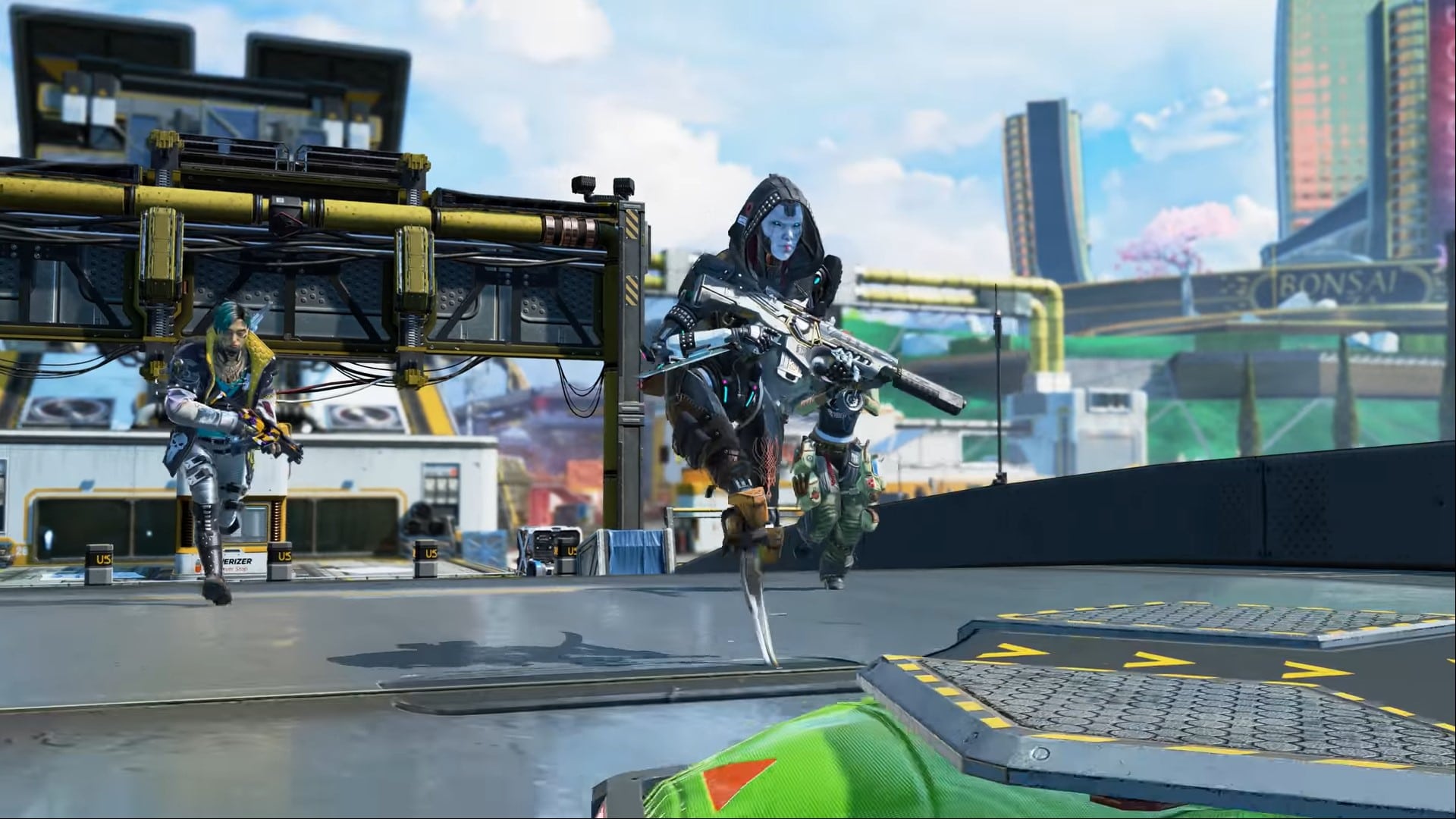 Respawn Entertainment has begun rolling out the Apex Legends update 1.88 (pre-load out on PlayStation consoles), which adds the much anticipated Defiance season! Here’s the lowdown of everything new in the Apex Legends February 8 patch notes.

Mad Maggie, cutthroat warlord and the Outlands’ meanest mad-lass, is back and she’s coming into the Apex Games like a wrecking ball with an offensive playstyle. With enhanced shotgun proficiency, the ability to dislodge enemies behind cover, and a crushing Ultimate, aggressive players are going to love playing as Mad Maggie.

Tactical: Riot Drill
Fire a drill that attaches to an obstacle and burns enemies on the other side.

Wrecking Ball
Throw a ball that releases speed-boosting pads and detonates near enemies.

Check out Maggie in action here.

Defiance kicks off with Control, a brand-new limited-time mode that delivers an adrenaline-fueled 9v9 experience where two teams fight to capture and control points on the map. Featuring the largest team sizes in Apex Legends to date, players will pre-select their loadouts, drop in, and for the first time ever have the opportunity to experience the rush of having the same Legends fighting side by side, creating thrilling moments that can only happen in Control. In this mode, death is not the end, as throughout the match players will be able to respawn and carry on the fight until one team earns enough points to be declared the winner. So get ready to experience the spectacle of 9v9 Legend combat when Control kicks off on February 8th. Check out the full blog from Designer Mark Yampolsky here.

Get Rewards to Kickoff the Season

To celebrate the 3rd Anniversary and the amazing community of Apex Legends, we’re giving away rewards to all players who log in during the first three weeks of Defiance.* From February 8 to February 15, all players will unlock three Octane thematic packs just for logging in; if players don’t already have him, he’ll automatically be unlocked. From February 15 through February 22, players that login will unlock three Wattson thematic packs, as well as the Legend herself if she’s not on the player’s roster. Then we round out the celebration with Valkyrie, where between February 22 and March 1st players that login unlock three Valkyrie thematic packs plus one Legendary pack, with those that have yet to unlock this high-flying Legend getting her just for logging in. So be sure to login between February 8th and March 1st to unlock your rewards!

Someone or something has hacked into Olympus’ Phase Runner, sending the floating city crashing down and creating destabilizations across the city that change the face of the map: perhaps forever. Players will experience a malfunctioning Olympus, with new terrain exposed and more POIs than ever. And that’s not all!

Check out the full blog from map designer, Alex Graner that goes into detail about what to expect from the Olympus Map Update.

Players in the regular Play Apex queue will drop exclusively into Olympus for the first week of the season, after which we’ll add Storm Point and Kings Canyon into the rotation.

It’s now been a full season since we introduced PvE into Battle Royal and while we were happy with how wildlife launched, we’ve seen that Prowlers were a bit too punishing and not quite rewarding enough. Additionally, we have seen some bad edge cases that create frustration for players that we’re hoping to address this season. We’ll go more in depth on the exact details and our reasoning behind them in another blog, but in short:

While Storm Point has a relatively healthy spread of landing locations, we realized the typical drop ship logic often made the high northeast corner of the map particularly tough to land in. Rotating the distribution and moving the centerpoint slightly northeast should make Highpoint and Lightning Rod more accessible while still allowing players to land in the lower southwest portion if they desire.

Each image below shows 400 drop ship simulations, before and after the change:

In Apex Legends the primary goal is to be the last Legend standing, and racking up kills is the vehicle to get you there. Last season, we made changes that opened up flexibility by compensating players with high kill counts that didn’t necessarily place first. We like this flexibility, but after observing the pacing of high-level ranked games, we saw players were focused on seeking out kills a little too much. Players that focus on fighting for higher placements and teamplay should be more faithfully awarded.

This tuning is more punishing to teams that undervalue placements. We’re bumping up placement points for teams in the top 5; easing back on the ‘Kill KP Cap’ and adjusting ‘Per Kill Bonuses’ to require ~2-3 less Kills to hit the maximum.

Split 1 will be played on Olympus, and we’ll move over to Kings Canyon for Split 2 in April.

During this season we’ll be releasing a new feature where players will be able to determine which players they want to receive voice and text chat from called Communication Filter. Players can find the feature in the Options Menu under Gameplay and will have 3 options to choose from.

Players can also unmute anyone they choose, friend of friend or a good random squadmate.

Drone View HUD and other  Quality of Life updates:

Crypto has been off the grid in terms of pick rate. The goal of these changes was to make his kit more accessible and engaging. With a new deployment option, we lowered drone health to prevent reckless drone deploy. Crypto is still a methodical, calculating legend, and manually piloting Hack should still be the primary way to access macro-level recon. The drone view HUD updates should help here as well. Crypto’s never been weak per se; we’re cognizant of his strengths at high-level play and will be keeping an eye on his usage and performance.

The Alternator SMG returns to the ground loot this season and taking its place is the powerful mid-range energy Volt SMG.

Sliding with the Triple Take or Peacekeeper significantly speeds up choke time and automatically reloads rounds.

The Triple Take’s return to floor loot has been really positive, but it’s proving to be a bit ahead of the pack with its ranged performance. We’re eliminating the bullet growth it retained from its days as a sniper to pull it in line with other Marksman rifles.

On January 13, 2022 we implemented a hotfix to the Rampage and Sentinel infinite charge bug. We took that opportunity to get out a Rampage nerf early. Noting these changes here for anyone who missed our earlier messaging.

As we continue to introduce new weapons and loot into the game we must consider the impact it has on loot saturation and the ability to find specific pieces for loadouts. With this change we are able to keep weapons available but give our floor loot some breathing room.

BUG FIXES AND QUALITY OF LIFE

Fixing some weird rules in how assists and kills are determined and properly rewarded.

Yep, a big update indeed. Once we know more about the next legend or event, we’ll be sure to let our readers know.