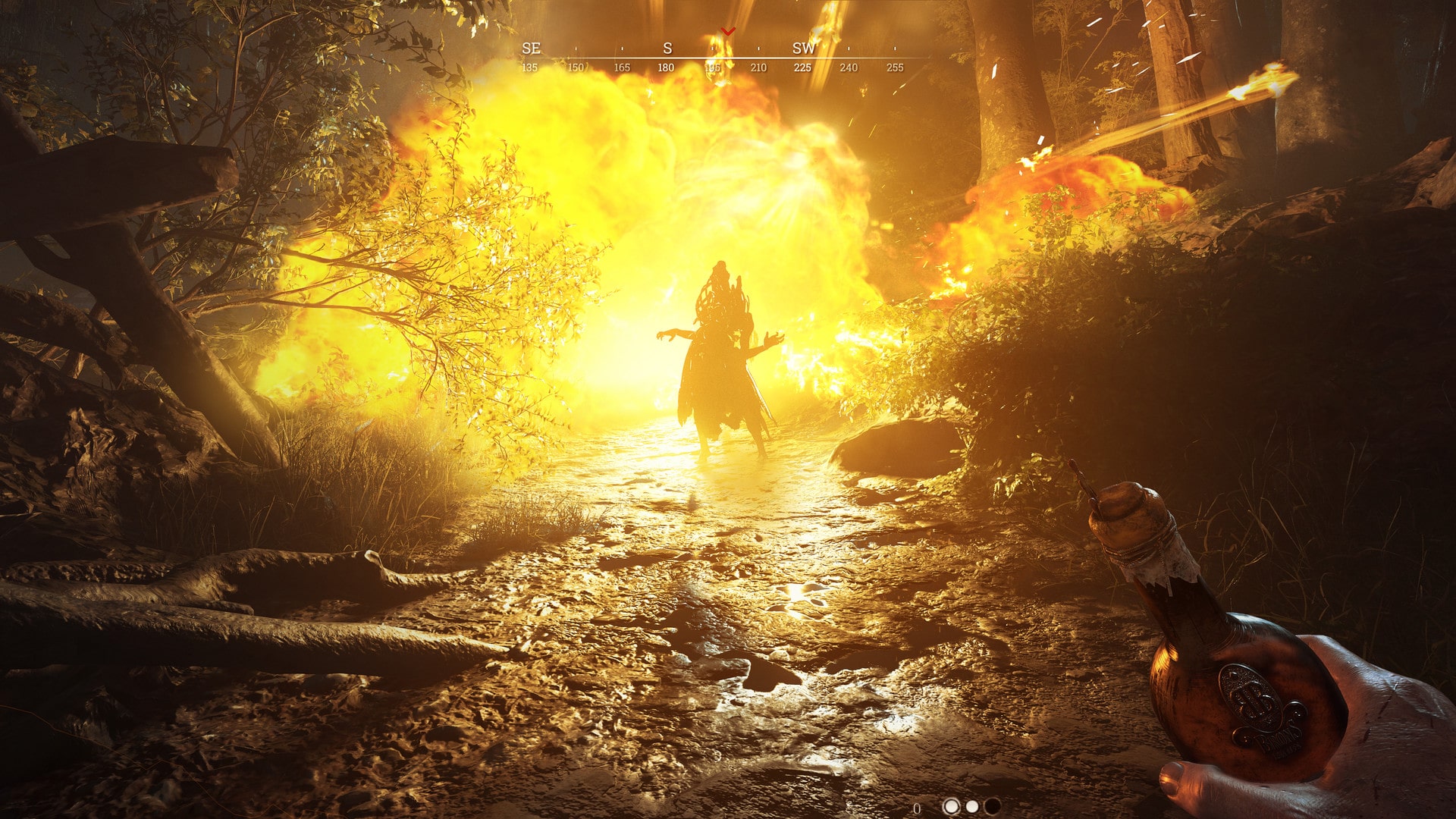 Crytek has released the Hunt Showdown update 1.45 for consoles, which is for big Update 1.7.2 patch that was released last week on PC! Read on for the full Hunt Showdown February 8 patch notes, and we’ve included the fixes rolled out by Crytek a few days ago for issues brought on by Update 1.7.2.

Please note, we have introduced a number of tentative fixes to help with performance issues, missing geometry in compounds and a number of other fixes that are not directly noted below. Please let us know if you continue to experience issues around this.

Mr. Orwell Chary is looking into ways to give the AHA advantage in the Hunt and is looking for donations from only the most experienced Hunters. Every day after finishing their missions, players will gain bloodline XP that will make them eligible to give tribute. Once certain thresholds are met, offer blood for Mr. Chary’s Dark Tribute and be reimbursed* with one of many rewards including: Hunt Dollars, Blood Bonds, Hunter slot, Bloodline XP, Equipment, Upgrade points, Legendary item instance, Legendary item unlock, or the exclusive Dark Tribute Hunter Bad Hand: Bad at faro and worse at poker, John Robertson was determined to find glory and gold at a card table. But he was fated to become the Revenant, and he lived as he died – making the best of a bad hand.

There are 4 thresholds of XP that the player needs to reach:

Players who do not have enough experience to reach the final threshold may make a deal with Mr. Chary by paying him Blood Bonds but remember: Players can only do the final Tribute after reaching the first 3 thresholds.

Progression resets every 24h. If the player used and unlocked all attempts, they can’t offer blood until the next day, when clock “resets”.

With this update, we are bringing a new feature called “First Bounty Extraction Bonus”. This means that players can earn bonus XP and Hunt dollars for their first successful bounty extraction with each hunter. The bonus applied is as follows:

This bonus is a fixed percentage that will be added to the total XP and Hunt Dollars earned during the first mission where you successfully extract with the bounty.

This reward is not limited to once per day, but once per Hunter each day. Whether it is an existing hunter or a new recruit, the first successful bounty extraction with each hunter in a given day will grant this bonus.

Like other deadeye variants this weapon has been modified with a side mounted Deadeye scope making it easier to hit those longer-range shots. This new variant can also be paired with the Deadeye Scopesmith trait.

This innovative design includes an addition to the trigger guard in the form of an extra finger hold. This grip provides an extra point of leverage, making it much easier to cock the hammer of the weapon. The barrel has also been shortened to reduce weight which allows for even better ergonomics while the shooter is charging the weapon.

This means the Rate of Fire is significantly higher than the Base Scottfield Model 3, however the shortened barrel reduces the weight at the front of the weapon which results in higher recoil and a decrease in hip fire accuracy. Since the left hand is used to fan the weapon, the extra finger handle does not affect the rate of fire when fanning this weapon.

This version of the Scottfield adds a stock to the pistol grip, making a much more stable platform for shooting. This drastically reduces the recoil and increases the overall accuracy of the weapon. This addition also provides a more comfortable holding position, making it slight easier to prepare, resulting in a decrease in time between shots.

The top break action of the Scottfield already provides an increase to reload speeds in comparison to other revolvers in the arsenal. The addition of a speed loader mechanism means that the reload is even faster with the Model 3 Swift. These simple devised allow for all 6 rounds to be pre-loaded into them which are then ready to insert into the chamber and reload all rounds simultaneously.

However, this addition means that you can no longer top off this weapon one bullet at a time as all spare rounds must be kept in the speed loader for the next quick reload. This means any rounds left in the weapon while reloading will be ejected and lost to make room for the next load.

Recently, we have seen an increase in players attempting to exploit the friendly-fire damage reduction. Due to this, we have decided to remove friendly fire/self-damage reduction that we had previously introduced to the game. This means that you will need to be far more careful when using explosives near your teammates as they will now take the exact same amount of damage as enemy players.

The bounty revive mechanic was introduced to give an advantage to those that play the objective. We are very pleased with this feature overall, but we must acknowledge that it can potentially create some difficult situations, especially for solo players taking on teams.

Increasing this damage to the size of a big health chunk will ensure that at some point, the reviving player will run out of healing regardless of the health chunk configuration, which results in the reviving player becoming just as vulnerable as the teammate they are reviving. This should give solo players a much better chance to even out the odds during a fight.

We will continue to monitor the feedback around these changes and if need be, will make further adjustments in the future.

While we feel the Bow is in a good position in the current meta, we still want to give it some more general utility so that it remains a viable option in most situations. These adjustments will ensure that it is slightly more versatile for both PvE and PvP encounters.

It’s important to note that a OHK at these ranges is still not a guarantee. A solid hit with the majority of pellets from this shell will still be required to ensure the OHK.

We know that there has been some friction within the community regarding these high rate of fire options, but we are hoping these changes will help to alleviate some of these frustrations. These changes are aimed at ensuring these options require a lot more skill to use. The extra recoil for Dual wielding will ensure players need to use more control and trigger discipline while using them. We feel that these changes will ensure that it is a bit harder for players to fall victim to an ambush from shots from Dual wielding, fanning, and levering.

We feel that overall, the Explosive crossbow is in a good spot in the meta, however we have seen several exploitive strategies appear (primarily on console) which means some changes are required. Along with the explosive changes mentioned in an earlier dev note, these changes are aimed at reducing some of the pain points that are experience, mostly from our console community. We also hope that by reducing the aim-punch this will give players a chance to reach quicker when caught in the explosion.

These changes are aimed at bringing these trip mines more in line with the Concertina Trip mine in terms of its effectiveness in a defensive role, ensure that all traps have roughly the same level of potential.

Poison Trip Mines will now produce a lasting effect meaning attackers will require a higher level of commitment if they want to push defenders. Triggering these mines is no longer a trivial matter due to these changes. This means defenders can capitalize on the attacker’s mistake, especially if the attacker commits to the fight and remains near the trap instead of retreating to a different location.

Alert Trip mines will now burn a small amount of health when triggered (charcoal effect to a small portion of the first health chunk). Two Alert Trip mines in proximity will be enough to set a Hunter on fire making them a far more effective tool, and not just when used near Red Barrels.

Decoys have struggled to find a solid place in players inventories, especially when compared with the usability of its cousins the Blankfire decoys, Decoy Fuses and Chaos Bomb. Selecting Decoys meant that you have a lot more of them to throw around, but the practical use was rather limited as experienced players would easily notice the attempted deception based on the sound they produced.

We want Decoys to be more useful when enemies are close by, giving you a chance to use them more reliably to create confusion. We have opted to change the impact sound from the generic metallic sound to something that represented the sound of footsteps.

Players can now decide if they want to use them to trigger sound traps (Dogs, birds etc), trigger AI to provide a distraction or by using them to deceive enemy Hunters, especially in those high-tension moments such as approaching or defending a Boss lair.

This exploit was the result of a bug and was not intended by the team. We have been attempting to track down this bug for quite a while and have now found a good solution to this problem. From now on, it will no longer be possible to draw conclusion about other players and their presence in a nearby compounds based on whether the doors and windows have rendered in or not.

A full list of Known issues will be posted later. For now we want to highlight the following issues:

We have managed to isolate the repro steps for this bug and are currently working on a fix. For now, we can share the steps so that you can avoid it and ensure it does not impact your gameplay.

This issue occurs if you perform a reload right after auto switch back to your weapon after using the last consumable in a slot (e.g. If you bring 2 vit shots, use the last one and reload as soon as it switches back to the weapon). To avoid this from happening, we recommend to not instantly reloading after the auto switch or cycle to another weapon first before performing a reload (or just wait a few seconds).

Here are the known bug fixes for the Feb. 2 patch released on PC. We’re including this given the version jump from 1.43 to 1.45 for consoles.