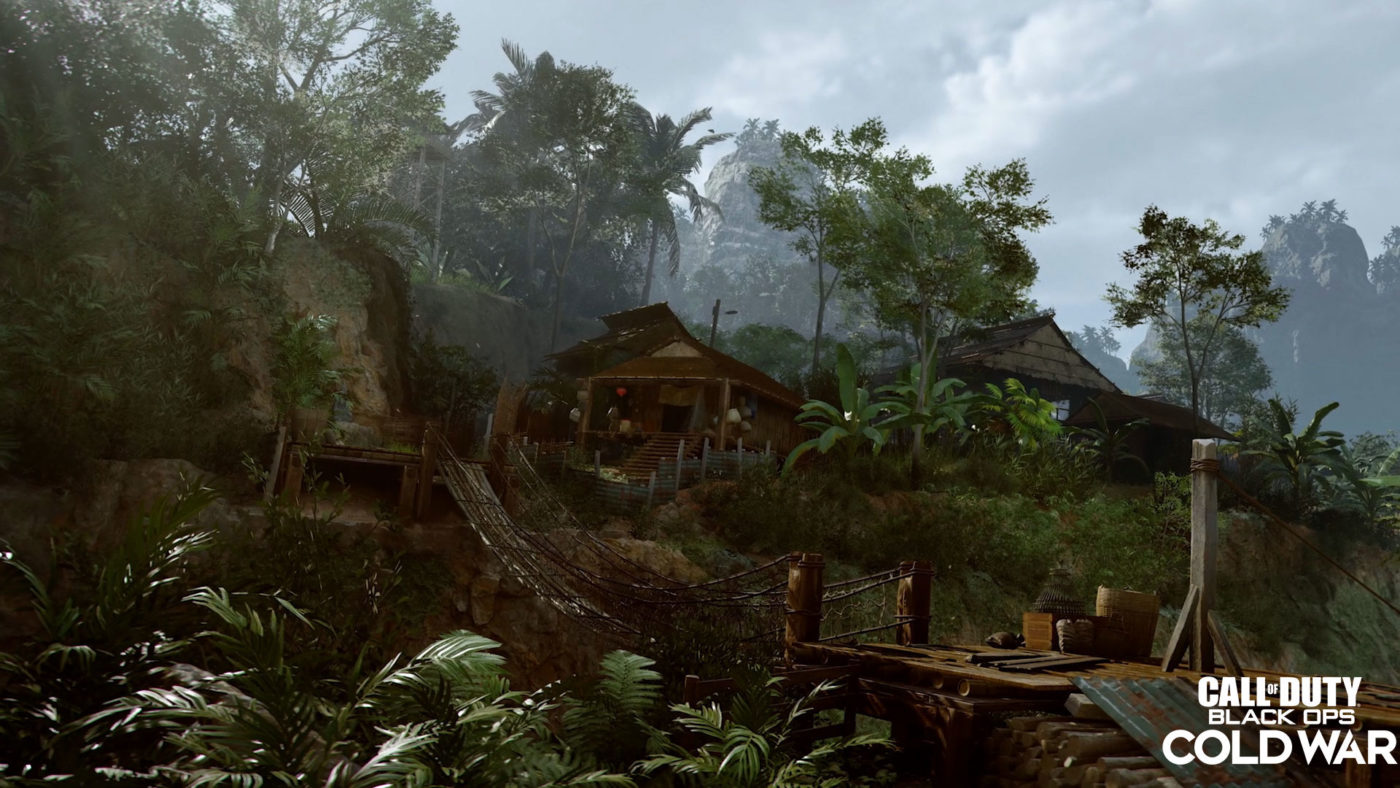 While for most Call of Duty fans, multiplayer is the actual meat of the game, there are still lots of players who want to experience the campaign, and in Treyarch’s COD titles, the Zombies mode. Activision has given a deep dive on the Black Ops Cold War campaign and Zombies today, which includes new trailers.

The Black Ops Cold War campaign is being developed by Raven Software, and is a direct sequel set 13 years after the original Black Ops story! This allows newcomers and series vets to experience the story fresh. You can check out sneak peeks at three of the campaign missions in Black Ops Cold War below (minor spoiler warning!).

It all begins in a grungy tavern within Amsterdam almost two weeks after New Year’s Day, 1981.

A massive break in a CIA investigation led three operators to this otherwise seedy watering hole, one whose jukebox is always tuned to the latest hits despite the lack of turnover to its décor or its top-shelf bottles on offer. After a meeting with their source, the checks are cleared and they exit past the local bargoers to the alleyways, gearing up to capture the first of two key players to an ongoing hostage crisis.

After a rooftop chase with multiple fast-paced shootouts, the mission shifts gears as the three men confirm that their second, and final, target is at the Trabzon Airfield in Turkey. Although they prepare for another takedown under the cover of night, they come prepared with an unconventional weapon just in case the DZ goes hot.

Who is this threat that can alter the course of this global struggle? As one of the operators recall from their time fighting in the Vietnam War, it’s none other than Perseus, a mysterious Soviet spy that some people believe never even existed.

Despite this figure being written off as myth, players will relive a first encounter with Perseus during the Campaign’s second mission, “Fracture Jaw,” set within the Vietnam War. Through this flashback, the team will uncover clues needed to track down Perseus, as the overarching theme of deception is deeply rooted within this past war and the current operation.

In signature Black Ops fashion, this Campaign will feature multiple flashbacks like “Fracture Jaw” that add another layer of context to the overarching story. Through these recollections, this CIA team – and of course, the player – will gain the insight needed to uncover the truth behind Perseus.

“Desperate times call for desperate measures, and that’s what this mission is all about,” Vondrak explained. “After tracking down several leads in the hunt for Perseus, the team find themselves faced with the unthinkable: they must go behind the Iron Curtain – into the heart of the Soviet Union – and infiltrate the KGB headquarters.”

Another change of pace compared to the first two missions, “Desperate Measures” sees our CIA operators break out the covert spycraft for a last-ditch effort to gather information on Perseus. Using the latest in 1980s technology including modified civilian tools and prototypical machines, players will assume the role of a Soviet double agent working for the CIA reporting for work at the KGB’s headquarters.

This status comes with access to an incredible peek into the world of the KGB, along with the opportunity to “obtain” information out of their “fellow agents.” However, one odd move or awkward discussion could lead to cover being completely blown, compromising the mission and turning it into an all-out fight for survival.

Not a fan of the campaign? Maybe Zombies is more your speed, then. For Black Ops Cold War, Treyarch has lifted the lid on the “Dark Aether” story! Check out the Perks, Scorestreaks and more!

Read on below for the full descriptions of each base-level Perk at launch:

Treyarch mentioned that perks can now be upgraded up to three levels permanently! This is where Skill Tiers come in.

To upgrade your Perks, you’ll need to earn Raw Aetherium Crystals by reaching milestone rounds within the game, or through successful exfiltration. What’s more, you’ll be able to upgrade skills related to Field Upgrades, Ammo Mods, and Weapon Classes to help you stay alive even longer as you collect and invest more Aetherium Crystals. Over time, you’ll use these crystals to improve the tools in your arsenal, improving their damage and utility to help you reach higher rounds.

As an example, upgrading the Elemental Pop Perk to Tier III will grant the following effects:

Oh, and don’t worry… we’ll be introducing more Perks throughout our post-launch Seasons. No guesses!

As for waepons, there will be five tiers of rarity. Read up on that and more below.

Perks are essential, but let’s be honest… survival in Zombies is all about the weapons. In previous iterations, too many Zombies players were left trying to figure out which weapons were the “top tier” for any given situation based on their Wall Buy prices, or by rolling them from the Mystery Box and hoping for the best. This time around, our new weapon rarity system gives every weapon a path to greatness. Here’s how.

In case you didn’t know, Treyarch is bringing custom loadouts into Zombies! This time, players can bring their unlocked weapons and items from multiplayer to Zombies!

Loadouts don’t change the classic Zombies formula as much as you might think, however. If starting out with a classic 1911 pistol is your jam, go for it! The design team carefully considered how loadouts would affect weapon progression gameplay, and as such, loadouts in Zombies are simplified compared to those in Multiplayer.

You can only bring in a single weapon and a Field Upgrade with your Zombies loadout. Furthermore, that single weapon will have its attachments and cosmetics, but it will be the lowest rarity available (Common). This means your starting weapon won’t be very effective at killing zombies after a handful of early rounds, and you’ll still need to get out there and find other weapons quickly. You can also upgrade the rarity of your loadout weapon in-game – or any weapon, for that matter – so you can keep your customized loadout weapon into higher rounds, if that’s more your style.

Zombies will also feature Field Upgrades, which are present in multiplayer.

Replacing the crafted shield of previous Zombies experiences, Armor provides a 360-degree layer of protection from the armies of the undead. Armor can be found as a Rare drop from enemies or purchased using Salvage. When worn, it will mitigate a portion of incoming damage – every hit will still deal damage – but its durability is limited.

Although Armor is partially repaired by picking up the occasional Armor Shard dropped from certain enemies, it’s a finite resource and you’ll find yourself vulnerable again once you run out of Salvage to repair it. You can also fully repair Armor by picking up a Carpenter Power-Up.

Armor can also be upgraded two additional levels, increasing its damage mitigation and durability. You’re going to need it as rounds progress, because zombies grow stronger every round! Remember, even when paired with an upgraded Jugger-Nog Perk, no amount of Armor can save you if you find yourself overrun… especially as rounds get higher and the challenge increases.

We’ve wanted to bring Scorestreaks to Zombies for a long time, and now that player progression is unified across modes, there’s never been a better opportunity! While certain Zombies maps have included some variants of these in in the past, the new Dark Aether narrative offered the perfect chance to finally carry over some of the militarized versions into Zombies to raise the stakes even higher.

Sometimes you just need a little extra power to get out of a tight spot, and that’s where Support comes into play. At launch, the available Support selection will include:

Keep an eye out for one of these to pop out of the Mystery Box, if you’re lucky! And for those curious about how calling in a Chopper Gunner works without being instantly ripped to shreds by zombies while you’re controlling it: any Support that takes perspective away from your character will temporarily make you immune to damage and ignored by enemies while it’s deployed. This ensures that parties of one can make use of Support in solo games, as well.

Finally, there are new features coming to Zombies as well! Read up on the new Ping system, as well as loot and optional exfil!

For the first time, we’re bringing a locational Ping system to Zombies players! This will function the same way it does in Black Ops Cold War’s Multiplayer, activated by pressing d-pad left on controllers and [Z] on keyboards by default.

Whether you’re marking the next door you need a friend to open, pointing out the Pack-a-Punch machine to a first-timer, or pinging the latest location of the Mystery Box for your squad, we think this feature brings a huge quality-of-life improvement to Black Ops Zombies players.

It pays to stay resourceful during an undead invasion. In Black Ops Cold War Zombies, every zombie has a small chance of dropping resources including Salvage, Armor, and even lethal and tactical equipment. The tougher the enemy, the better the loot.

As you unlock equipment and Scorestreaks through standard player progression, that content will become available at the crafting table in-game and can be crafted using resources. Rarity is also assigned to loot based on its effectiveness; for example, a Frag Grenade is considered Uncommon loot, whereas the Cymbal Monkey is a Rare drop.

Why die if you don’t have to? With the new option to exfil from the map when your squad can’t last much longer, you can roll the dice and try to survive long enough to escape with some extra rewards… but it won’t be easy.

Liking what you’ve read so far? Black Ops Cold War will shoot out this November 13 on the PS4, PS5, Xbox One, Xbox Series X and PC.