PvZ fans that missed EA’s Gamescom 2015 presentation in the wee hours of this morning are in for some news on PopCap HD’s quirky shooter sequel, Plants vs. Zombies: Garden Warfare 2. New gameplay footage, which you can watch above, showcases one of the new maps, Moon Base Z, that will be featured in the game.

In addition, the studio also revealed that Garden Warfare 2 will include a handful of major improvements over the original title such as a player hub called “Backyard Battleground,” which will allow players to accept quests from either Crazy Dave or Dr.Zomboss, allowing them to customize characters and loadouts.

For those who love to party up with other people, the biggest feature of Backyard Battleground is the fact that you can invite three of your friends into your player hub to either party up for co-op or other multiplayer modes.

Plants vs. Zombies: Garden Warfare 2 is set to release sometime in Spring 2016 for the PC, PlayStation 4 and Xbox One platforms. As an added bonus for those who pre-order Garden Warfare 2, you’ll receive a Mass Effect inspired mech the “Grass Effect Z-7 Mech” for the Imp and Z-mech class. 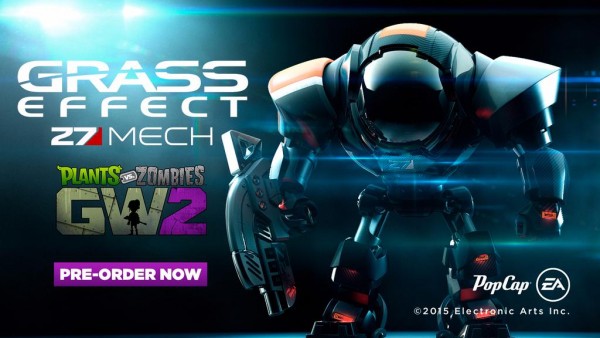