The studio detailed that plan in a blog post and video earlier today, revealing four different seasons of content, starting with “Operation Black Ice” this January. Here’s the Year One Roadmap at a glance: 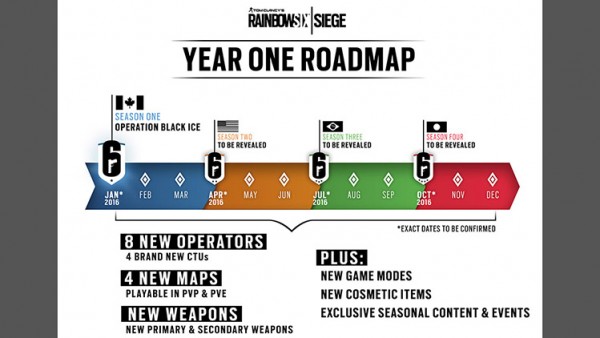 “Rainbow Six Siege will be actively supported with regular gameplay balancing, tweaks, improvements to features, and detailed patch notes. Additionally, a dedicated team of about 80 people will continually listen to fan feedback, monitor gameplay statistics and ensure that the experience is the best it can be. Events and competitions are also in the works, as are four major content expansions for 2016 that include new maps, operators, modes and weapons that will be playable at no additional cost.”

While things like new Operators and Weapon Skins can be unlocked with Renown, earned through a multitude of actions, things like Renown Boosts, Premium Weapon Skins and other cosmetic items can be purchased with R6 Credits. These are bought in chunks of 600, 1200, 2670, 4920, or 7560 with the first costing $4.99 USD and larger bundles costing more but at a bigger discount. Meanwhile, new Operators added post-launch will take 25,000 Renown each to unlock, which Ubisoft says is reflective of about 25 hours of gameplay, or 600 R6 Credits each.

As the studio announced earlier, all new downloadable maps added after release will be free of charge in an effort to keep Rainbow Six Siege’s community united. With this system in place, Ubisoft hopes that players will never feel forced to pay for new content, but we want to know what you think. Does it sound fair to you? Tell us in the comments!