by Graham Foster
in Features, News

This weekend I had the chance to finally sit down and start my playthrough of Assassin’s Creed Odyssey. I had not watched too much preview gameplay, thinking that I would try to save as much as possible for my own time with it. I knew already that the game would make me choose between its two protagonists: Alexios or Kassandra. I had sort of decided to myself that I would go with Alexios because I had just played Shadow of the Tomb Raider as Lara Croft, and for some reason that made sense to me. Maybe part of me just wanted to play as a male because I am male? I’m not sure.

Then the time actually came. I was prompted to choose one or the other, and I realized that maybe I did not know enough about the characters or the game to make this choice. But, reluctantly, I committed to Alexios and thought the two characters would be mostly the same anyway.

So now the game is really beginning, and I’m introduced to Alexios for the first time. From the first words out of his mouth, I knew I messed up. My first impression was that the voice actor was sub par at best. Maybe it was just the one scene? Maybe I’m the problem.

So I kept playing, and his voice acting, even his appearance, continued to irritate me. Contemplating a restart to switch to Kassandra, I told myself that I need to give this guy a second chance, again. 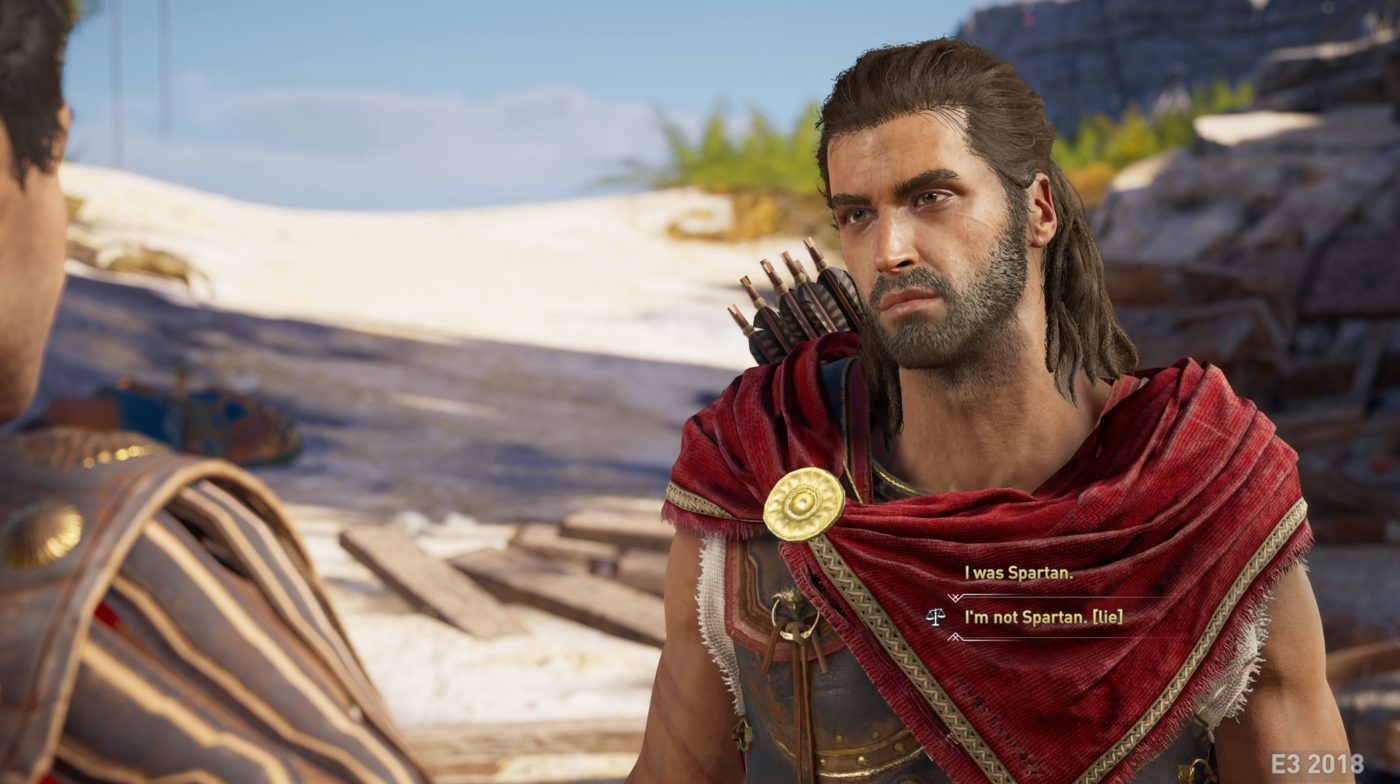 I played on, and it was not long until I noticed that he runs oddly. Something was just off about it, and I couldn’t pinpoint it. I asked my fiancée who was watching me play, and she agreed. It was one of those uncanny valley situations in which something just looks wrong for reasons unknown.

I thought that maybe it was slightly feminine? Yes, Alexios has an oddly feminine swank to his gait. Then it hit me, I’m not supposed to play this game as Alexios. I stopped playing and did a little research, and as it turns out, Kassandra is the canonical character in the canonical novel.

And in an instant, it all made sense. Did Ubisoft intend to make the game with only Kassandra as the lead, and then back out later and opt to add Alexios? We may never know, but it kind of makes sense. Fans of big franchises are known to be gatekeepers in these situations (I’m looking at you, Star Wars and Battlefield). Studios and publishers have good reasons to be afraid of fan backlash. It can hurt sales tremendously.

I can certainly empathize with gamers who prefer to have options regarding the sexes of their characters. I started with Alexios, and I would have stuck with him, had he not felt so wrong. But in the case of Alexios, ostensibly, his presence compromises the artistic intentions of developers.

I restarted the game and chose Kassandra, and everything was right again. I found that her voice acting was in a different league, and her running animations looked correct for her. Even her appearance just seemed so much more likable to me (Wonder Woman, anyone?). Despite sharing the same conversation options and effectively having the same personality, between her appearance and her stellar voice acting, Kassandra emerged, for me at least, as the better character.

Who you choose to play as is entirely up to you, the gamer. That’s why these options exist. But consider yourself warned, Alexios is hard to tolerate. Even I am surprised to hear myself say this, but I cannot recommend Kassandra enough. If you want to save yourself the trouble of replaying the intro, choose her from the start.

The views in this article are solely that of the author’s and do not represent the entirety of MP1st and its staff.

Report: Call of Duty: Black Ops 4 Day One Update Has Multiple Files Needed for Download, Here’s Some of the New Stuff

Report: Call of Duty: Black Ops 4 Day One Update Has Multiple Files Needed for Download, Here's Some of the New Stuff