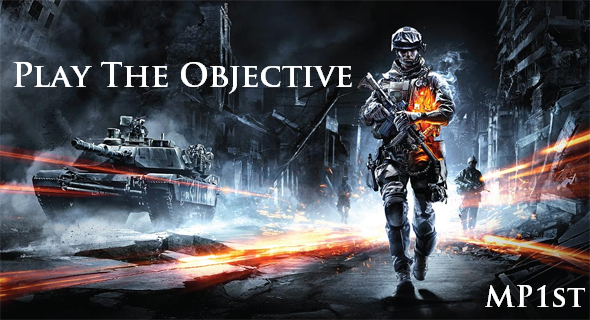 I don’t know about you guys, but I’m really excited to see this trend catching on more and more in my gaming sessions of Battlefield: Bad Company 2, and maybe even more importantly, in the YouTube community. I say this is perhaps more important in the YouTube community because it’s where less experienced players go to watch their favorite, veteran players as they post their footage of the ways that they like to play Battlefield games. I think it’d be pretty safe to say that these guys have a lot of influence over the community since YouTube is so accessible, and it’s usually the first place people go to learn a thing or two about how to become a better player. We’ve obviously seen a lot of great gameplay footage of amazing kills and killstreaks by some of the best players on the internet, but I think many gamers are beginning to realize that the Battlefield franchise has a lot more depth to it than racking up head shots and no-scopes. I think the Battlefield community is in the midst of seeing a shift away from kill-oriented game play to objective/team-oriented gameplay.

While BFBC2, for example, doesn’t really reward players with killstreak bonuses for playing as a team, only a decent amount of points, there aren’t many other games out there that give you this many options or opportunities to really work together and work towards a common goal. What I mean is that a lot of shooters out there are simply about shooting things. For the most part, your goal is to shoot stuff, maybe capture a flag and perhaps arm a bomb or two. Of course these are huge staples of the Battlefield franchise as well, but what other games out there allows you to heal teammates, resupply comrades with ammunition, repair friendly vehicles, and spot enemies for your entire team to see? It’s our job, as gamers, to take advantage of these gameplay mechanics and make the most of them. It’s also these types of actions that I believe reward the player with the most self-fulfillment. It makes you feel like a part of something bigger than yourself. I think this is also, in part, due to the fact that deep down, you know you are actually helping out another human being somewhere on the other side of the world, or maybe just down the street. You are making his or her Battlefield experience a much better experience than it could be otherwise, while at the same time, satisfying your own sense of accomplishment.

What Is The PTFO Movement?

PTFO is the simple idea of being less concerned about your kill to death ratio and being more focused on accomplishing the task at hand. Of course, this mostly applies to games like Battlefield where the game types are mainly objective-oriented. You may have noticed that Battlefield is a game who’s winner is determined by which team plays together and fights for the objective. You may be an amazing shot, and have reflexes like a cat, but it won’t win you a game in Battlefield unless you have a strong team behind you, who you’re willing to work with.

While its origins do not have an exact beginning, and while many players have adopted this play style since the birth of Battlefield, the PTFO movement has seen a recent boost in popularity, especially in the YouTube scene. I think this is, in part, due to the many commentators that have begun preaching this ideology in their YouTube videos, especially in preparation for Battlefield 3. However, I’d like to mention one commentator in particular who has had a big influence in the way I play Battlefield games, and who I think was one of the first to really start introducing this idea to the Battlefield community. While the entire DCRU (Demolition Crew) is a great source of inspiration on YouTube, DCRU Colin has some amazing videos that I think clearly define what the PTFO movement is really about and why I think it elevates the Battlefield community above the rest. I’ve included three of Colin’s more important videos at the end of this article, but I highly suggest checking out his, and the rest of the DCRU’s YouTube channels.

One question you might have is why do we even need to be inspired to play the objective? Doesn’t everyone just realize that it’s the right thing to do? Well, ironically, it seems to be the developers themselves that are placing the emphasis on your K/D ratio and other trivial stats. Personally, I was quite let down to see your K/D ratio included in the in-game leader-boards of Battlefield 3, alongside your total score for the match. I would much rather see something like a ‘score per minute’ instead. Of course, K/D is something that should be kept in personal stats, but I don’t believe it needs to be emphasized in the leader-boards. If I’m not mistaken, I believe your K/D ratio even played a large role in determining your skill level in Battlefield: Bad Company 2, which I don’t think is a true representation of how someone plays Battlefield.

Another factor that I think has played a large role in emphasizing K/D is the Call of Duty series. Now, to many, this games centers around your K/D ratio, which is fine, especially in TDM game types. Putting emphasis on kills is perfectly suited to this style of gameplay, and with the mass amount of popularity this franchise has gained in the past few years, this mentality is bound to seep into other FPS franchises. You may have noticed that videos of awesome kills and epic killstreaks became all the rage on YouTube, and It was quite natural for players of other FPS games to want to imitate this style of play. Unfortunately, it just doesn’t fit the Battlefield franchise. I’m sure many would agree that it just isn’t what this game is about. It’s not what ‘Battlefield‘ means to our community.

Competing With a Team, Not Against

To speak from personal experience, I eventually became discouraged with the Call of Duty series when it got to the point where I felt like I was only playing for a high K/D, rather than playing to have fun. This is because deep down, I knew that it was the sole determining factor, at least that other players/friends could see, that dictated what kind of player I was. See, I think that once you start becoming an experienced player, your expectations begin to rise. Call of Duty was loads of fun for me in my earlier days of gaming until I began to expect to have good games with a high K/D all the time. Later, when I couldn’t meet those expectations, I became all the more disappointed than I would have been otherwise, if I were less experienced. I almost feel like when I play call of duty, I’m actually competing against my own teammates, not with them.

This is why I found the Battlefield series to be a breath of fresh air. When I made the switch, I began playing for different reasons. I began playing for the challenge of completing an objective and for the thrill of fulfilling an important role in my squad. Lifted was my burden of maintaining a high K/D ratio.

Two things I want to make clear before I wrap things up. First, I’d like to mention that while I think stress shouldn’t be put on your K/D, especially in non-TDM-type games, it’s obviously still important to be able to shoot well. Shooting down enemies is still one way to help your team. However, when it gets to the point where you are no longer concerned about your squad or the objective, then things may get a little out of hand. Second, I still enjoy Call of Duty and don’t want readers to believe that I think ill of it. These were just my own personal challenges I had with the series. Maybe, I should go see a psychiatrist.

So, what can you do to play your part in this movement that has been gaining more and more momentum? Simple: play the objective, help your team, and spread the word. Oh, and play Battlefield 3 when it comes out!

Make sure to let me know what you think in the comment section below. Do you think your kill to death ratio should be as emphasized as it is in this generation of shooters?

Want to get some Battlefield 3 games going with the MP1st team? Make sure to follow @MPFirst on Twitter and check out some of our other Battlefield 3 articles:

DICE On Competing With MW3

Killcams in Battlefield 3 – An Unwelcome Feature?

Lastly, make sure to check out these DCRU Colin videos below and subscribe to his channel!

Gears of War 3 Multiplayer: the Good, the Bad, and the “Meh”