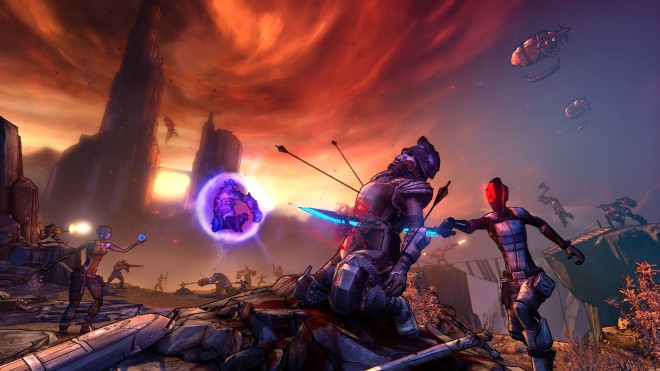 Tiny Tina’s Assault On Dragon Keep is the latest and final campaign add-on for the Borderlands 2 season pass. It has players immersed in a game of “Bunkers and Bad-Asses,” a Pandorian version of the popular tabletop role-playing game, Dungeons and Dragons. In this game, Pandora’s deadliest child, Tiny Tina, acts as the game’s Dungeon Master, or “Bunker Master” in this case, and the original vault hunters helplessly play along, even if they aren’t really up to it. Tiny Tina deals with the events of the main game and slowly comes to terms with the death of her friends, all while they wait for the new six vault hunters to get certain information off of a Hyperion Spy.

With my time playing Assault On Dragon Keep, it was apparent that Gearbox really went above and beyond with creating this DLC, making sure it pleased all Borderlands 2 fans. Its great writing really stands out, painting the vault hunters, both old, new, and other fan favorite characters, in a less serious tone then their usual self, leading to rather interesting and hilarious quests that range from helping an adventurer track down his buddies who he fears to be loot ninjas, to helping Mister Torgue fit in with the ‘nerd’ culture even though he clearly isn’t the type.

Thanks to the great writing, those who weren’t fans of the Tiny Tina character will be happy to know she’s more toned down in this DLC, making her much more enjoyable then her previous self. This, of course, has a lot to do with her current state of mind, trying to deal with events of the main game and using this game of Bunkers And Bad Ass as a healing process. In turn, it leads very dramatic decisions during her time as the Dungeon Master, adding a very interesting dynamic to game. For example, she can change the quest, characters enemies and their levels, and scenery in the imaginary world around on the fly, depending on how she’s feeling. 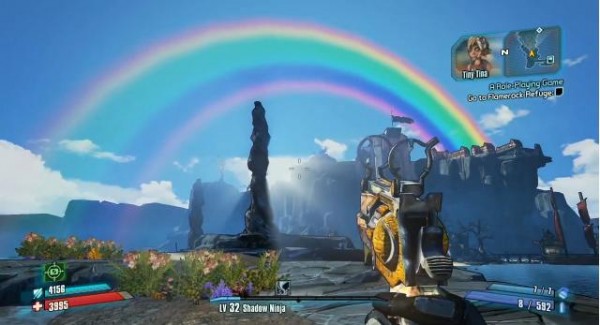 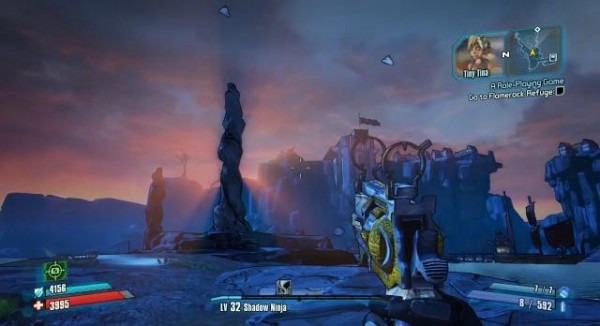 Speaking of scenery, the art and locations featured in Assault On Dragon Keep are easily, hands down, the best yet. Not only are they interesting, but the areas are massive and really add to the feeling that you’re actually going on an adventure. The big change in the quality of the scenery also goes hand-in-hand with all of the new enemies, who act rather differently from the majority of the baddies found in the main game and previous add-ons. Gearbox added a whopping 71 new enemy types in the DLC, which is more then three times the number of enemies found in the other DLCs. Among the new enemies added in Dragon Keep is Spider-Pants, a running joke from the Borderlands 2 community that stemmed from a simple typo of the Spider-Ant enemy that gained massive popularity on the official Gearbox forums.

Additionally, Assault On Dragon Keep implements a number of various new features. It includes tons of requested wishes from the community, such as new uses for Eridium, for example. You can choose to spend 5 pieces to have a greater chance to ‘roll’  for better quality loot from all the red chests that you will come in contact with during your time in Assault On Dragon Keep. You can feed a person of high importance your earned Eridium for a chance to receive some rare loot as well. Gearbox has also added a repeatable slaughterhouse that’s not only fun, but challenging too.

Now, no DLC for Borderlands 2 would be complete without some sweet loot that you can add to your arsenal. Though the actual amount of unique loot to be featured is rather low compared to the previous add-ons, it does contain possibly one of the best healing items in the game, the Grog Nozzle. It is capable of healing you for 65% of all damage dealt while it’s in your hands. You can also now “spell cast” grenades as your character shouts out words like “magic missiles” or “fireball” as you throw them, makes nading all the more fun. These grenades are able to replenish themselves over time, acting as spells would in other RPG games. 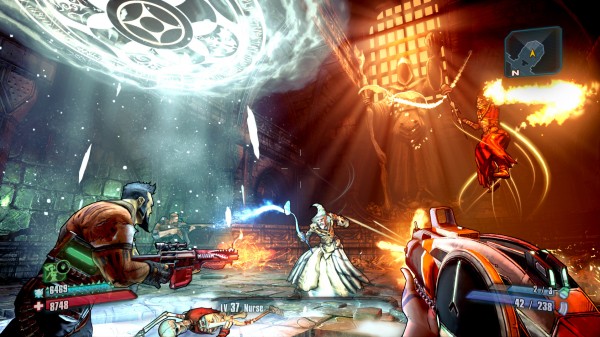 Axton, Maya and Sal taking on some wizards in hopes to score some magic spell grenades

Those who aren’t fans of the constant grinding for the legendary loot will be happy to know that high-tier loot and loot unique to Assault On Dragon Keep are actually easy to acquire. In fact, by the time I finished the main quest for Dragon Keep, I acquired five new legendaries and handful of unique items, all dropped by random mobs of enemies or bosses.

Finally, and possibly one of my favorite part of any Borderland 2 DLC, are the raid bosses. The raid bosses featured in Dragon Keep are quite different from the norm that we’ve become used to in the Borderlands series so far. Taking on not one dragon, nor two, but four at once make for a very hectic fight – Dragon whom are made up of Boost (purple), Brood (green), Healianth (blue), and Incinerator (red). Collectively, they are called The Ancient Dragons Of Destruction and will test your ability to survive.

If you are able to overcome the odds and beat them, you will be showered with loot and be able to access over 50 red chests on your way back to exit the arena. Maya players who have been disappointed with her action skill ‘Phaselock’ not being able to trap raid bosses will be happy to know that the Ancient Dragons Of Destruction are able to be trapped into your phaselock. 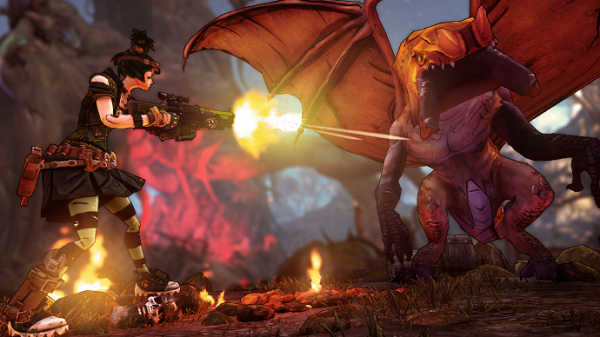 Gaige taking on a dragon

To put it simply, Tiny Tina’s Assault On Dragon Keep is a must buy if your a fan of the Borderlands series. It takes what makes Borderlands a great game and adds on to the goodness in every way possible, bringing you the whole Borderlands experience for a small price. Additionally, Gearbox did a great job to make sure some of the fan’s wishes and crazy ideas, such as spider-pants, were implemented, including the return of fan favorites characters such as Mister Torgue.

Tiny Tina’s Assault On Dragon Keep gets five out of five stars. You can either pick it up for free as a season pass holder, or for $9.99 / 800 MS point.