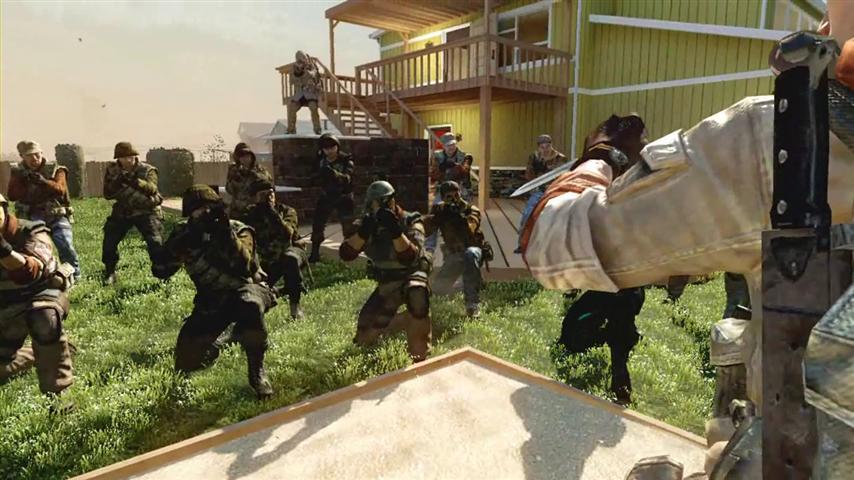 In order to distinguish the different breeds of Call of Duty competitors, I devised a specific and foolproof classification system in order to aid gamers in handling communication with, between, and about their opponents and teammates. You might be asking yourself why identifying certain players by labeling them as a dance is necessary. Here’s an example: A player enters your game and joins your team. He tags along with you, but runs away at the first sight of the enemy. To help out the rest of your teammates, instead of attempting to describe his absurd behavior, you simply have to say, “Guys, we have a Moonwalker on our team.” They’ll know never to rely on him, and you’ve helped out your team by identifying its weakest link.

Here are eleven dances that are also Call of Duty Players (each description is followed by a typical in-game reference):

The Thunderclap dance entails a knee-bending bob punctuated by “dust-off” claps aimed towards the sky. The Thunderclap Call of Duty player bends his knees to camp in corners, punctuating every kill (probably 1 or 2 per match) with an ear-shattering scream such as “Get some!”

Example: “Man, we need to private chat; I can’t handle this Thunderclapper much longer.”

Example: “That guy’s definitely a Swag Surfin’ Joe. How do you get to 15th prestige and not know how to navigate Nuketown?”

Example: “Well, we could have killed their last two guys, but that damn Moonwalker wouldn’t get my back.”

The Running Man is a classic party dance, and basically requires the dancer to run in place with exaggerated movements. The Running Man Call of Duty player takes a more literal approach, and runs all over the whole damn map, bypassing teammates in need and ignoring the hell out of everything except his desire to get back to his sweet camping spot.

The Carlton is a dance made famous by Alfonso Ribeiro in the show “The Fresh Prince of Bel-Air.” Playing spoiled rich kid Carlton, Ribeiro would dance to Tom Jones and mimic dance moves first used as comedy bits by the edgy and profane Eddie Murphy in Raw. The Carlton Call of Duty player is the spoiled and profane child who shouts nonsensical swears and insults that can only really be pulled off by legitimate tough guys.

Example: “That Carlton’s racist rants are getting old; I wish kids had bedtimes like they used to.”

The Cabbage Patch is the dance older people will usually do because they haven’t seen anybody really dance since 1987. It involves putting the fists together and churning the arms in a horizontal direction. The Cabbage Patch Call of Duty player is either a new gamer or an older person just getting into games. They want to fit in and be a part of the verbal ruckus, but end up ruining the fun by squeaking out some awkward slang like “Ain’t no thang, homey!” Minutes of uninterrupted and awkward silence ensue.

Example: “Dude, that Cabbage Patch just made a Fraggle Rock reference. I kind of feel bad for him.”

The Safety Dance is a dance made famous by the 80’s band Men Without Hats. The Safety Dance Call of Duty player never leaves “safe” zones. Afraid of possible combat and enemy contact, he never leaves the spawn, except to shoot noob tube rounds over the closest buildings in a last-ditch effort to snag a kill.

Example: “Man, stop Safety Dancin’, and help the team for once!”

Peanut Butter Jelly Time is a dated song, dance, and meme that has somehow remained popular and is still amusing. Nobody hates PBJT, and even though that dancing banana has been plastered all over every corner of the internet, the dance hasn’t suffered the same fate of obscurity as so many other dances and memes. The Peanut Butter Jelly Time Call of Duty player is basically a successful Cabbage Patch. He might be hauling out vernacular from 1993, or dropping quotes from “In Living Color,” but his delivery is so amicable and impeccable that he’s a joy to play with, and brings little half-smiles to his teammates.

Crank That (Soulja Boy) is a dance popularized by rapper Soulja Boy Tell ‘Em. It requires the dancer to exhibit braggadocio that reaches levels of parody, and encompasses dance moves similar to the movements seen in physical therapy classes for disabled people and the elderly. Crank That Call of Duty player might consistently place last on the scoreboard of every game he plays, but that doesn’t stop him from putting down his teammates, insulting the sexuality, mothers, and skills of his opponents, and promoting his own abilities and humongous genitals.

Example: “Crank That needs to shut his mouth; he went 2-17 and four of our guys were AFK.”

The Stanky Legg is an unfortunately-named dance coined by the GS Boyz that involves keeping your knees bent at extreme levels and grinding one leg around in obscene circles. The Stanky Legg Call of Duty player is essentially an evolved tea bagger or corpse humper.  After a kill, he becomes so infatuated with the remains of his victim that he crouches and squats over it, moving rhythmically from side to side. After a particularly spectacular victory, The Stanky Legg might actually go prone and pantomime necrophilia with the twisted carcass of his opponent.

Example: “Stanky Legger has been crunching that guy’s dead ass for like a minute.”

You’re a Jerk (Jerkin’) is a dance created by the New Boyz in 2009, and it is basically a backwards skip-in-place with the occasional squat popping. The Jerkin’ Call of Duty player can do myriad things that will earn him this title, including: standing in a doorway and not moving, causing a traffic jam, and forcing his teammates to find alternate paths to a basic objective; standing in odd corners of maps to snipe during objective games, and completely refusing to help in any meaningful way; and spamming invites to prestige lobbies.

Example: “Stop jerkin’ it in the doorway and help your team!”

You thought this was hilarious, wait until you read one of these:

Jaw Dropping Battlefield 3 Screens. Graphics Maxed out on the PC