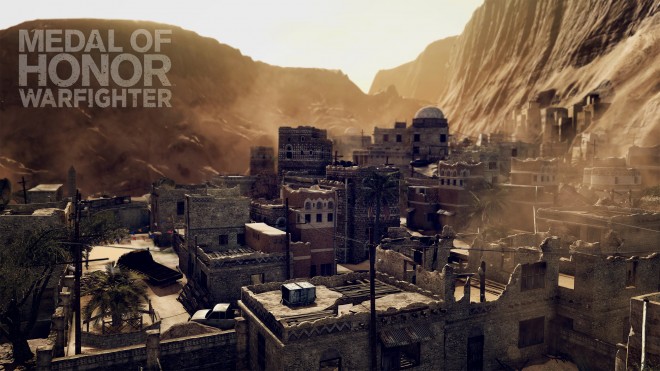 Medal of Honor: Warfighter will soon be deploying on the Xbox 360, PlayStation 3 and PC this October 23rd. If you’re not yet excited, chances are that you still don’t know very much about it. Now, that’s not your fault, of course. There honestly isn’t much to go by these days as the pickings are slim when it comes to multiplayer information.

Luckily, myself and a handful of others had the chance to visit the Danger Close team down at the Electronic Arts studios in LA where we got some good hands-on time with Global Warfighters. While not the final build, I found many promising goodies that have me excited for final release.

Upon picking one of six the six different class types in Global Warfighters, we were then able choose from one of twelve different units/nationalities before duking it out 10v10-style. Not all units/nationalities were available to us at first as we had to unlock them as we progressed through the ranks, though we did get a good taste of each of the six classes.

The biggest difference between classes that I found, other than their specific class abilities and support actions, were their movement speeds and ranges at which they were most effective. The demolition class with his or her Tank Mode ability, for example, was fittingly the slowest, though he or she could practically demolish anything within close range. I quickly found that the most effective way of dealing with this beast of a class was to simply get out of its way. Of course, you could then re-engage at longer distances if you were feeling lucky. On the opposite end of the spectrum, you have the Spec Ops class, who also has a smaller effective range, but is much quicker on his or her feet. You’d want to pick this guy for getting to those objectives quickly – a real asset in Warfighter’s “sport” mode, Homerun.

On the slower side, though not as slow as the Demolitions class, you have the Sniper and the Heavy Gunner who I found to be most effective providing support at longer distances thanks to their ability to deploy a bipod in either a prone stance or perched up on a ledge. While in this stance, not only do they get a better view of the battlefield due to their enhanced mini-map, but their shots become dead-accurate. It was a shame, however, that not all maps were suited for this style of play. I found myself only able to use my class ability when using one of these classes in very specific circumstances.

In the middle, you have the Pointman and Assaulter classes who can get a lot of work done at medium ranges. With their average movement speed, they served as a good middle-ground – someone who can effectively attack objectives, following closely behind the Spec Ops class, and yet still provide good support. The Pointman’s Heavy Hitters give them an extra kick in terms of bullet damage for the duration of one magazine while the Assaulter can devastate enemies with his or her grenade launcher. I found these class abilities to be the most effective, though hopefully not too effective in the final release.

Lastly, each class has a completely different set of support actions, both offensive and defensive which kept things interesting. I must stress, however, that unlike 2010’s Medal of Honor, score chain rewards, particularly the offensive actions, are much less of an annoyance as they once were. Fear not the dreaded spawn-trapping days of old.

Check out the full list of class abilities and units/nationalities below:

As I mentioned in my earlier report, different game modes take place on different sections of each map as each game mode requires a different amount of play space. For example, Hotspot utilizes most of the Sarajevo Stadium map, showcased in the most recent multiplayer trailer, due to its large number of objectives, while Homerun, a 6v6 game mode, takes place in a different, smaller section.

As a quick reminder, Hotspot has players either attacking or defending one of five randomly generated objectives while Homerum pits two teams against each other with only one life. One team must capture one of two flags and bring it back to homebase before being completely eliminated by the defenders. Sarajevo Stadium, a map that takes place at night, is set inside an Olympic stadium with a bobsled run which can be used to traverse different sections of the map.

Sector Control, a game mode that requires you to control up to three flags, similar to Call of Duty’s Domination or Battlefield’s Conquest, was also playable on Somalia Stronghold, a bright, open map that features a lighthouse with some good vantage points as well as some good CQC areas between the battered buildings. You may have seen this map in some earlier multiplayer footage.

Something brand new to us was Sector Control on Harra Dunes. Set in a small, shady village deep within a desert valley, Harra Dunes had me thinking of a few Counter-Strike maps like de_dust. While not not at all a rip-off, I suppose the setting alone was enough to remind me of such maps. Harra Dunes, in particular, featured a triangular set-up when it came to the different flag positions in Sector Control. It also featured a market/bazaar area near the center of the map, which provided tons of cover, while more rocky, elevated positions could be accessed near the edges of the map. Not a lot of fighting took place near the center of the map as, frankly, it was a dangerous place to be. Many of us ended up traversing the outskirts as flanking routes.

As you can see in the image above (click for larger size), the power of Frostbite 2’s lighting and landscape builder really came into effect here. The large, daunting cliffs were quite impressive in size as the sun’s rays trickled over its edges and onto the battlefield.

As for the gameplay, expect the look and feel of Battlefield, but the map design and match flow of Call of Duty. Personally, I felt Danger Close melded the two styles rather successfully and I think there’s plenty to like for both audiences.

While I found the gameplay enjoyable, there’s still much to be revealed when it comes to unlocks, weapon customization and ranking system. Hopefully, we’ll get a better look at these features in the coming weeks leading up to Medal of Honor: Warfighter’s release.

Inspired by actual events, Task Force Mako infiltrates an Abu Sayyaf terrorist stronghold set in a flooded Isabela City, Philippines. The stage is set via an in-game cutscene: Preacher and Mother desperately gather intel in a sticky situation where hostages are being held captive. Once again, the Frostbite 2 engine showcases some extremely life-like facial animations between conversing characters. While it may seem a minor technical feature, it adds ten-fold to the believability of the story telling. After the terrorists disperse due to pre-mature sniper fire, things are finally kicked into motion and it’s up to you to get to the hostages before its too late.

You play as Preacher as you push your way through enemy forces utilizing an assault rifle equipped with a dual-sight (ACOG and iron sight). The AI is what you’ve come to expect. Enemies take cover while chipping away at yours, lob grenades and fire deadly RPGs your direction. Luckily, if things get a bit hectic, sliding to cover and popping off shots using the peak and lean mechanic can really save your neck. So can the handy call-outs that come from your brothers in arms. Upon landing your first headshot, you’ll be greeted by a familiar notification – a satisfying moment. As in 2010, the HUD is kept squeaky clean and disappears when not needed, ammo can once again be replenished by simply requesting some from your teammates and getting shot at makes your character flinch in a startling but realistic manner.

The demo came to an explosive close as perspectives switched to that of a supporting helicopter gunner above – a scene which has become all too familiar to most gamers by now. Personally, I felt it didn’t quite fit the more tactical gameplay I experienced moments before. But again, being inspired by true events, this sequence was possibly included as a means to stay true to what might have actually taken place.

In true Frostbite fashion, explosions look and sound great while weather and lighting effects provide an immersive experience similar to what you’d find in Battlefield 3. In this particular play session, we were set up on the Xbox 360, surprisingly, which held up quite nicely and was a real treat to look at, despite not being able to match the graphical capacity of the PC.

You can catch a full play through of this very mission right here.

Back to multiplayer! Considering we know so far, what class and game mode are you most looking forward to trying out in Warfighter? Let us know in the comments below and be sure to follow MP1st on Twitter and Facebook for your Medal of Honor fix!