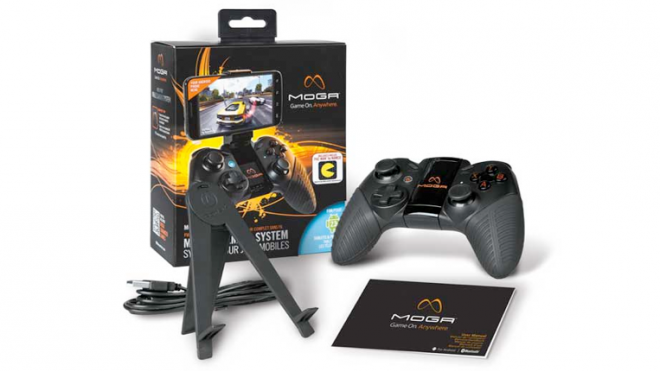 In recent years, significant strides have been made in cell phone graphics processing units (GPUs) thanks to the likes of Qualcomm, ARM, Samsung, and others. With the implementation of these GPUs in retail cell phones and tablets, there has been a considerable rise in not only the graphics department but the overall quality of mobile games as well. Some games make great use of the ‘touch only’ controls to provide a fun and intuitive experience for the player. Other games seemingly ignore the limitations of mobile controls and refuse to adapt the game in a way that wouldn’t be better without a controller. If only there was an accessory that would allow players to play these games the way the developers stubbornly intended….

PowerA has introduced a new controller for those with Android devices (Gingerbread 2.3 or higher) to help remedy the situation. While it loses the portability of its predecessor, the MOGA Mobile Gaming System, it has picked up a comfortable form factor that should feel very familiar to anyone who has used an Xbox 360. Since there really isn’t any competition in this category of accessory, the Moga Pro is an easy recommendation. However, there are definitely some areas of concern that you should consider before throwing down your hard-earned $50 so easily.

Let’s begin with the packaging. Once you open the box, you’ll find the Moga Pro, a Micro-USB charging cable, a tablet stand, and some instructions on how to configure the device and download the Pivot app (more on that shortly). The tablet stand is a nice addition. Since the cradle built in the controller can’t hold a tablet, the stand allows you to set up your tablet in an upright position and play wirelessly.

Once I checked off the prerequisites for the setup, I secured my phone in the cradle built into the controller. The cradle securely holds your phone in place and unless you intend on flailing your arms violently, there will be no need to worry about the phone falling out. A nice design choice was how the cradle doesn’t protrude from the controller in the closed position. It helps keep the aesthetic that there is just one solid controller with no moving parts.

Powering on the device is handled along the trim below and between the two analog sticks. Sliding to the left turns on Mode A, which is for using the controller in conjunction with the Pivot app. Sliding to the right turns on Mode B, which enables HID mode and allows you to use the controller in some apps that don’t directly support it through the Pivot app (ex. emulators). Mode B generally requires you to manually assign buttons inside the app in order to use it. If you want the game to seamlessly recognize the controller without configuration, its going to need to be one of the 80+ titles currently supported inside the Pivot app. This includes popular titles such as Modern Combat: Zero Hour, Shadowgun: Deadzone, and Dead Trigger. Once you’ve downloaded the Pivot app and have charged the controller, you’re ready to begin the setup.

In order for the controller to be recognized by a game while in Mode A, the game must be launched from inside the Pivot app. Merely opening the game from the apps drawer will not work. Opening up the Pivot app will begin the initial setup. A separate setup is required to configure HID mode (Mode B), but it only adds on a few extra seconds to a relatively quick process.  Once the device was paired, I went through to see what games were natively supported. Though the list is relatively small, I have no doubt it will grow in the near future.

Since I had a few titles I knew were already supported, I went over to the ‘Play’ tab to try them out. Immediately I ran into an issue. The Pivot app prompted me with a message saying I already had titles supported and that I was good to go. However, Modern Combat: Zero Hour wasn’t being detected despite being on my phone. Here’s where the implementation of the proprietary Pivot app becomes a hassle. In order for Mode A to work with games, Moga Pro functionality must be built-in or patched into the game. Modern Combat: Zero Hour was the only title I purchased from Gameloft’s site directly and not on Google’s Play Store. The Gameloft edition didn’t prompt me to download the updated Moga Pro version, unlike Play Store apps which automatically notify the user whenever an update is available. After extensive searching, I couldn’t find the updated version on Gameloft’s site, so I took the hit and repurchased the game through the Play Store. If controller functionality was directly baked into the Android OS, this wouldn’t be as much of an issue.

Before I resolved that issue, I fired up Shadowgun: Deadzone to try out the controller. After figuring out the default control layout, I could tell the controller was fairly solid. The triggers and bumper buttons had a nice subtle resistance to them. Again, those coming from the Xbox 360 should feel right at home. Face buttons felt a bit stiff, but I think they can be worn in so they depress easier. Start and Select buttons are tiny to the point they could be qualified as slivers. Since they aren’t used too often, this flaw can be overlooked. An interesting difference between the Moga Pro and the 360 controller is the battery. The backplate is flat, as opposed to the bulky battery pack found on the 360 controller, and allows a player to extend their fingers without restriction. I found having this extra space to be quite comfortable. If you had any aspirations for using this in a fighting game, its worth mentioning that the 4-way D-Pad was extremely rigid in my use.

It’s clear the developers didn’t exactly have controllers in mind when they first built the game as there are no options to customize button layout or use the keyboard without having to use the touchscreen. Even navigating menus is a bit of a hassle. While in rare instances you can use the controller to navigate menus, in most instances you can’t do anything else without also using the touch screen. Shadowgun: Deadzone was strange in that I could pause the game, but the only way to resume the game was to hit the ‘Resume Game’ button on the touch screen. While this is by no means a deal-breaker, it isn’t exactly a seamless experience for the user and may throw off those who are accustomed to being able to do everything with the controller.

As for the game itself, Shadowgun: Deadzone is an online multiplayer third-person freemium shooter. Graphics are remiscent of the original Unreal Tournament, but with higher resolution textures and character models. Using a single thumb to juggle firing a gun, throwing grenades, dropping health packs, performing dodges, AND controlling the reticule is a bit of a pain. This seemed like a great title to try out the Moga Pro with and see if it made things easier. The Answer: an obvious yes. Analog sticks perform great and improved my control tremendously. However, there were only a couple areas where I noticed an improvement: using the sniper rifle and lining up headshots on stationary targets. Reason being is on a good day, the total population generally doesn’t exceed 800 players. Considering people all over the world play this game and it isn’t region locked, lag can rear its ugly head quite a bit. Most of the time you’re trying to figure out how far in front of the moving character to aim in order to register a hit. So in terms of head-on combat, I saw no improvement with the controller. However, enemies who were hugging walls or were otherwise stationary, I found myself able to lineup headshots much faster.

Next up was Another World. Since it’s not a multiplayer game, I won’t spend too much time discussing it. It’s a trial-and-error cinematic puzzle game from the hardcore 90’s where checkpoints were seldom and save files didn’t exist, only passcodes. Another World has moments that require very precise timing and using ‘touch only’ controls can prove to be frustrating when the game doesn’t pick up your swipe on the screen. Using the Moga Pro removes that frustrating element entirely.

Finally, there is Modern Combat: Zero Hour. For the uninitiated, the Modern Combat series is an unabashed Call of Duty clone designed primarily for the mobile market. After repurchasing the game, I booted it up in Pivot and gave it a go. Unlike Shadowgun’s connection issues which can sometimes negate the benefits of the Moga Pro, Modern Combat: Zero Hour is far more punishing to those without a controller. ADS helps significantly with bullet spread, but when using ‘touch only’ controls, its toggled on/off as opposed to pressing and releasing the Left Trigger on the controller. Grenades, ADS, Sprint, Reload, and Fire are all handled by your right thumb when playing ‘touch only’. As you can imagine, those with controllers have a distinct advantage. For a test, I played a round with ‘touch only’ and a later round with the Moga Pro. Here are the results: 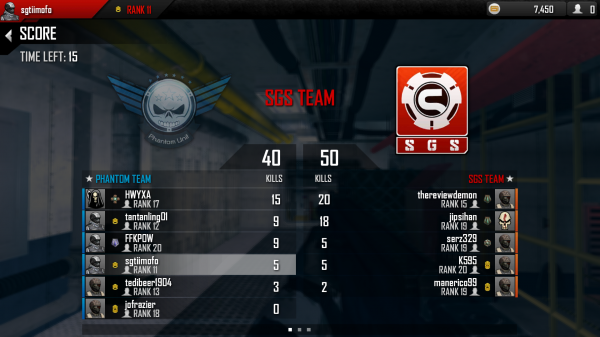 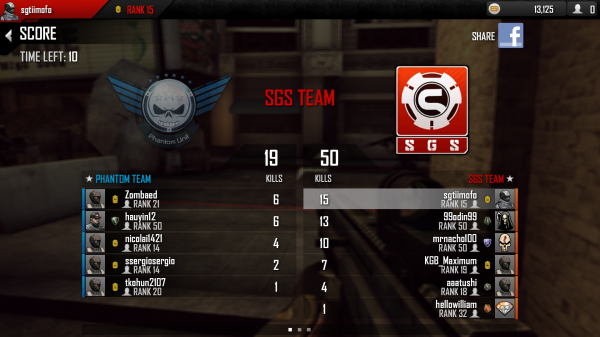 The transition to the controller felt seamless once I activated Y-Axis invert and adjusted my sensitivity. As you can see above, my score was tripled in the game with the Moga Pro. Being able to devote in-game actions to 4 fingers instead of just 2 thumbs helps tremendously. Everything from using the knife to reacquiring enemies that run past you are all easier thanks to the Moga Pro.

If you already have an Android phone with a fairly big screen and want a portable gaming option, the Moga Pro is a pretty good solution. While cell phone gaming may not pack the same punch as the PS Vita or the 3DS, it is definitely more cost effective. The controller itself is $50, with most games either being freemium or never exceeding $7. The form factor is a little too big for pockets, but would be great for those who travel. If you’re looking to get your console fix while on the go, the Moga Pro might be something to consider.

This review was conducted on a Verizon Droid DNA. Performance may vary based on phone model. The product was purchased by the reviewer and not provided by PowerA.