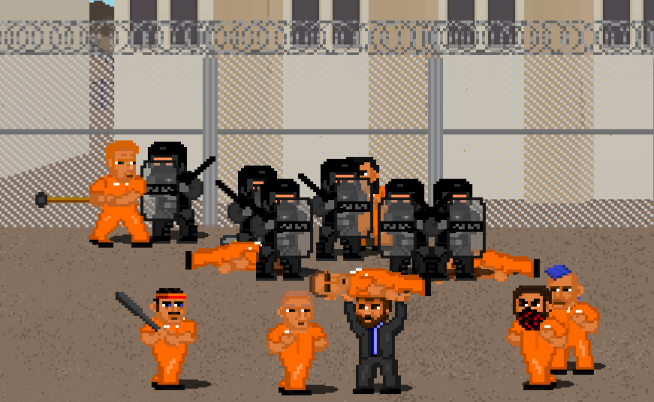 In our continuing coverage of independent multiplayer game developers, we had the honor of spending some time with Team2Bit. Team2Bit is a studio consisting of brothers Jake and Matt Lewandowski, who are hard at work prepping their first release, Fist Puncher. Fist Puncher will be released on Xbox Live Indie Games in early 2012.

MP1st: Fist Puncher’s aesthetics and gameplay are immediately recognizable to classic gamers; what specific games provided the inspiration for the title?

Jake: The biggest influence is probably Double Dragon. I fell in love with the beat ’em up genre the first time I saw Hammer and Spike take some thug’s baseball bat and clobber him with it. Video games had finally captured the spirit of professional wrestling-style stage violence that teenage boys love so much.

River City Ransom is another influence, but it may be one of those games that you remember as more fun than it actually was. I think Castle Crashers is an amazing evolution of brawler games; it shows there is still plenty of fun to be had with this style of gameplay. MP1st: In what ways are Team2Bit making Fist Puncher unique? Is it firmly rooted in nostalgia, or are there modern gameplay enhancements?

Jake: The processing power of the Xbox allows you to have a lot more going on onscreen at once, so there are larger fights than you would find in a game like this 20 years ago. You don’t have to worry about flickering sprites or frame rate drop when the third enemy steps out, so that’s nice.

Under the surface, Fist Puncher takes a more ambiguous stance on violence than some of its predecessors. The world has changed a lot since those games, and I wanted to reflect that. Many people have become disenchanted with the idea that problems are black and white, that there are good guys and bad guys  and the good guys can just fight their way to a decisive victory. I’m not saying we’ve replaced the kick and punch buttons with empathize and negotioate buttons, but there are points in the game where you get different results if you choose to try more conventional approaches. It’s fun to pull back the curtain of video game reality from time to time and look at the absurdity behind the concept – taking to the streets and fighting everyone you see just sounds like a good way to get yourself arrested or shot.

If we can get it together, there is still a possibility of online gameplay as well. It wasn’t planned at first, but we’re getting many requests so it may make its way on to our feature list after all.

MP1st: Given the blessing/curse of a massive AAA studio and an unlimited budget, what kind of multiplayer game might your studio produce?

Matt: We’ve always been big fans of old console RPG’s like Shining Force, Dragon Warrior, and Final Fantasy. It would be interesting to take the typical multi-character, turn-based RPG and allow individual players to control one or more party members. It would probably require more of a real-time component, but imagine how incredible a game like Final Fantasy VII would have been with a multiplayer mode.

MP1st: What are the unique challenges in developing a multiplayer brawler? How might those challenges differ from, say, an RPG, or a platformer?

Jake: The biggest challenge was definitely the graphics. I was initially resistant to making a brawler because you need to create a massive amount of content to make the game feel dynamic and avoid redundancy. The worst brawlers are the ones where you keep fighting different colored versions of the same guy on ddifferent colored versions of the same street for 10 levels. In Fist Puncher each of the 8 playable characters have 50+ sprites and there are 30 levels with unique settings. The enemies are constructed from several different layers of sprites so there is a good deal of variation. There is an intended simplicity in the look of the game, but that allowed greater depth in what you encounter. 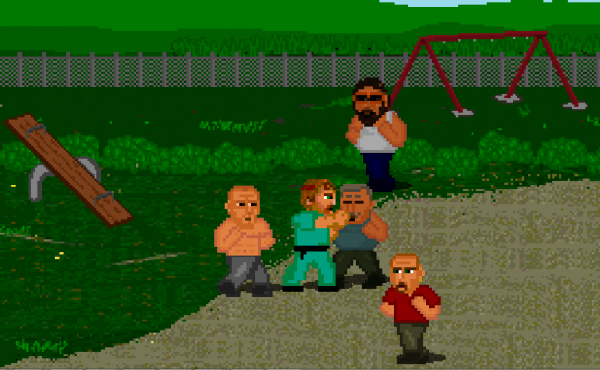 MP1st: Fist Puncher looks like a hilarious romp through classic gaming archetypes; is there anything on the agenda after FP launches? Any other grand game ideas or platform support?

Matt: Fist Puncher will be our first release so we’re putting in a ton of time and energy to really polish the game and make it as fun and playable as possible. We’re also hoping to springboard off some of the positive feedback we’ve received about a few of the characters (Dr. Karate seems to resonate well with gamers) and create a couple of small, web-based Fist Puncher tie-ingames done in Flash. Depending on how Fist Puncher does on XBLIG, we might pursue a wider PC release through a venue like Steam. As for the future, nothing is set in stone yet, but we have been brainstorming on some ideas for a continuous side-scrolling platformer. It is a crowded genre that already has some brilliannt indie games (BIT.TRIP.RUNNER, Canabalt, etc.) so we’d like to develop a title with a unique theme and gameplay. Regardless of which direction we take, we plan to continue working with retro aesthetics while incorporating modern gameplay ideas and influences.

Jake on IGF: We’ve just released a current build of Fist Puncher to the 2012 Independent Games Festival. We’re lucky to have such a prestigious event in the indie game community right in our backyard; there’s few opportunities to meet so many talented developers in one place. the competition is definitely fierce; if you look at the past winners, Minecraft, Limbo, Monaco, Fez, and Alien Hominid, and you can see that the bar has been set very high. We’re just happy to put our work on the table and have it evaluated by people who know good games when they see them. It’s inspiring to imagine all the hours people invest to make their games great and get them submitted to IGF each year. It really makes you want to keep working at perfecting the craft.

5 Features Next Gen Multiplayer Will Fail Without