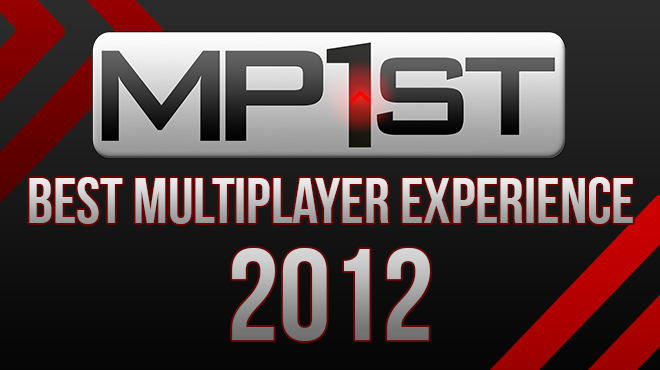 On January 1st, 2013, we will be awarding one title with the rank of the best multiplayer gaming experience of 2012. What makes this year’s choice so hard is not only the fact that there are a ton of amazing multiplayer games out there, but that MP1st is made up of many minds, all with different opinions and different gaming backgrounds. While you’ll soon find out what MP1st as an entity considers to be the top “MPE” of 2012, it would be unfair to let the diverse opinions of our staff go unheard.

But before revealing our picks, we’d like to remind you that in addition to the MP1st MPE2012 award, we will also be revealing the Reader’s Choice award on the same day. That means you have until the first day of 2013 to vote for your pick, which you can do right here, or on the right side bar.

A quick reminder of the nominees:

So, without further ado, here are the MP1st “Staff Picks” for MPE2012. Make sure to stick around in the comments where there is sure to be some friendly smack-talk and fierce debate!

With the year coming to an end, the time to choose the best game has come. This, however, is not really easy because there have been many awesome and really impressive games this year. With each year passing, multiplayer has become something more important – to a point where multiplayer-centered games have become the most popular and successful titles ever created.

My choice this year will go to Halo 4 because it was simply the best experience I’ve had in 2012. Not only did it feature an outstanding and emotive campaign, but its multiplayer (which was heavily modified by adding new weapons, specializations as well as different power-ups) is definitely better than any Halo multiplayer previously released. The Crimson DLC, which was just released a couple weeks ago, only made the experience better. The new vehicle, “Mantis,” just proved that it’s not only made to kill, but to cooperate in accomplishing the current objective, making the game even more fun by creating new ways to win.

This was a hard choice with all the amazing MP titles that have released, but I’m going to go with Journey. Playing a co-op match with another player has truly never felt so satisfying and meaningful. Playing with a completely unidentified fellow gamer for nearly four hours straight has left me with emotions that I cannot explain. With a beautiful art direction, an amazing score (first game up for a Grammy), and an immense world to get lost in, Journey has truly shown that gaming could indeed be art. While it’s not competitive (PvP) when it comes to multiplayer, the co-op is still, nonetheless, a true multiplayer experience.

For me, no other game has shined more this year and has enveloped the epitome of the multiplayer experience than Borderlands 2. It delivers on its promise of being bigger, better and more “bad-ass” then it’s predecessor, all while still mainting the highly addicting gameplay we all loved from the original. This is why it’s my pick for MPE2012.

Medal of Honor: Warfighter suffered heavily with its ill-timed release against two other FPS juggernauts, BO2 and Halo 4. It also has been criticized for its technical problems, generic campaign and its uninspired multiplayer. However, MOH:W still manages to pique my interest with its unique and fantastic gunplay, fireteam mechanic and the class system that offers different strategic elements such as the support actions.

Having good teammates such as my buddies Justin and Devin also increases the fun factor, allowing for some tense and hilarious games. Finally, the chance to play against the Danger Close developers with David and Todd in a nerve-racking round of Home Run was also memorable enough for me to justify my choice. In the end, I have many disagreements with the consensus that MOH:W is a mediocre title. Sadly, it is not enough to stop the already dwindling population of players and servers.

For me, MPE isn’t just how well a game plays. I’m as interested in how much a game innovates as I am how it plays. It’s really easy to release a great game and copy/paste it year after year. It’s also really easy to see what everyone else is doing and copy the formulas that work and drop what doesn’t. To me, MPE means what game blew the doors off the hinges and said “IT’S PARTY TIME B**CHES!” It means what game took balls to make and release in a sea of same-ness and generic move here, shoot this, move there FPS clichés.

As much as I like and play BOII, despite how many late-nights I have put into Torchlight 2, and regardless of how beautiful Far Cry 3 looks, PlanetSide 2 is doing things that no other MP game is doing.

While most of the big MP games are stuck in the refine, innovate, or die rut, PlanetSide 2 is taking gamers to another world and handing over the keys to one of the most dynamic rides I have ever seen in an MP FPS game. From absurdly massive maps to incredibly intense indoor gunfights, high-powered tank battles to challenging and devastatingly cool air combat, and from colorful and gorgeous daylight to moody and atmospheric nighttime gameplay, PlanetSide 2 has it all.  You will not find a more all-encompassing, dynamic, or in-depth MP game in this year’s roster of releases. Additionally, IT’S FREE.  Yes, the year’s best MPE is free to play for anyone and everyone. Granted you might need a fairly high-end computer to run it, it’s still my choice for MPE of the year.

It’s a close call between Guild Wars 2 and Blacklight: Retribution for me. While I had a great deal of fun playing Guild Wars 2, MMOs can’t capture me for longer periods of time anymore. Blacklight: Retribution, however, certainly did! Playing it gives me the same vibe I had when I discovered Team Fortress 2 back in the day. It’s fun, has a lot of depth and looks amazing. Best of all: it’s absolutely free! I definitely cannot recommend this game enough.

Forget CoD, Battlefield or any of those paid shooters. Even though BL:R is free to play, it delivers! When people talk about “the future is free to play,” this is what they mean. The unlock system is very satisfying for both paying and free players. BL:R offers at least as much depth and customization as Black Ops 2, while having high-end DX11 graphics up to par with the best in the industry. The gameplay is well thought-out and surprisingly fresh considering the amount of military shooters that are flooding the market lately. Since it’s absolutely free, there is no excuse for not trying this game!

This one was a hard, yet very easy choice at the same time. A riddle? No. After the dust had settled following this Fall’s clash of the FPS titans, two titles emerged as my go-to multiplayer experiences on the Xbox 360: Battlefield 3 and Halo 4. One of these titles won last year’s MPE, and so I am left with but one choice: Halo 4 – a hard choice because I could argue Battlefield 3 still holds its place in my heart as this year’s MPE, but an easy choice because I’m not going to break the rules of our own competition!

Let me be honest. I never liked Halo’s multiplayer. Though I’ve always admired the sheer skill it takes to play Halo at a competitive level – to learn its mechanics and master its nuances – the idea of super-human, moon-walking, plasma nade-tossing Spartan soldiers with space guns that take forever to kill another player just wasn’t for me. Yet, somehow, what 343 Industries did with Halo 4, in my opinion, was make Halo cool again – a critical factor that I felt the series was lacking after being introduced to more visceral and grounded games like Call of Duty or Battlefield. I still haven’t quite figured out what makes Halo 4 so cool. Is it the true “next-gen” graphics, the in-your-face sound design, or the rock solid gameplay? Regardless, this is one multiplayer experience I’ll be playing well into 2012.

That wraps up our picks for MPE2012! Who do you agree/disagree with? What are your picks? We want to discuss the best multiplayer games of 2012 in the comments below so make sure to stick around. Also, keep your sights on MP1st on January 01, 2013 for the ultimate “Multiplayer Experience of 2012” award as well as the “Reader’s Choice” award.

Remember to vote for your MPE2012!