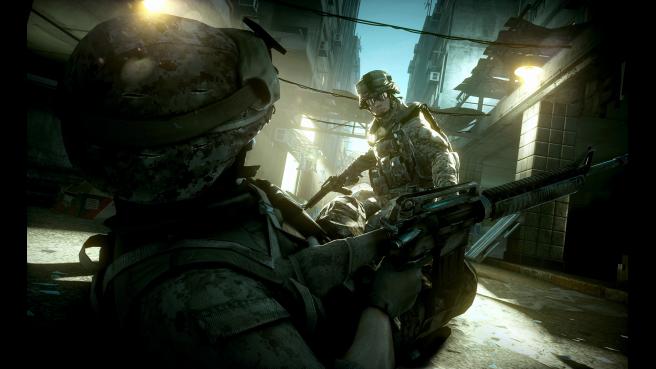 Last week, at GamesCon 2011, DICE released footage of its developers walking the press through a demonstration of their Battlefield 3 co-operative mode, which you can view here (WARNING: mature language). Other than the amazing gameplay that was shown to us, the most interesting aspect of this footage was that we got another glimpse of Battlefield 3 on the Playstation 3. Most footage to this date has been shown on the PC. Many remarked that this demonstration looked significantly better than the PS3 version’s first reveal on the Jimmy Fallon show about two months ago, where they showed some single-player campaign footage on the PS3.

So far, DICE has shown much love to the PC fans, and then to the PS3 community, especially since they announced a free downloadable copy of Battlefield: 1943 with all copies of BF3 for PS3 owners. Favouring the PC is completely understandable considering Battlefield 3 is a direct sequel to Battlefield 2, a PC-based game. You can read DICE’s statements on this here. Being primarily an Xbox 360 gamer, I have to ask… where is the love for the Xbox 360 owners, and when do we get to see BF3 running on the Xbox?

I can’t help but feel slightly concerned that DICE is trying to hide something. Perhaps the 360 version of BF3 won’t live up to the graphical expectations of the PC and the PS3? I am leaning towards this being the case, especially with some of the rumours currently flying about.

Some unofficial sources have stated that it was announced at GDC that the PS3 version of BF3 will support SPU-based deffered shading while the Xbox 360 version will only utilize tiled-based deferred shading. I haven’t linked to any of these sources because I am not yet 100% sure that these facts are true. However, I am aware that the PS3 does have a slight graphical advantage over the 360. This is obvious with PS3 exclusive titles like Killzone 3, Uncharted 2, or God of War 3.

Luckily, I have had the chance to play Battlefield: Bad Company 2 on both the PS3 and the 360. In my experience, I felt that the PS3 version did have a slight graphical edge over the 360, however, I found the gameplay on the 360 to be slightly smoother. Could this perhaps be the case with Battlefield 3?

What’s also interesting is that this is one of the first multi-platform games who’s principle platform is the PC. From there, it will be ported to the 360 and the PS3. This is in contrast to a game like Call of Duty: Black Ops, where the 360 has typically been the leading console. Unfortunately, we all know what happened to the PS3 port of Black Ops during launch. Lets hope DICE has a smooth launch across all platforms in October. While I am anxious to know the truth about any differences regarding the three versions of Battlefield 3, I trust in DICE to provide an amazing experience for all gamers on their platform of choice.

Maybe we will finally have a chance to see Battlefield 3 on the Xbox 360 during PAX next week.

Leave your thoughts below, and don’t forget to check out our Battlefield 3 section for all the latest BF3 news. Read DICE’s comments on some of the latest BF3 information here.