Many out there will be quick to point out the obvious, but let me just get it out of the way right now: This is not a Super Smash Bros. clone. Yes, it may have been heavily influenced by it, but the games are very much different in their own way. Who’s to say both titles can’t coexist? I know Call of Duty, Battlefield, Killzone, Halo, and a bunch of other first-person shooters out there do.

I know this is going to be one of those things where people et upset due to the current roster list. The true issue isn’t who’s in it, but who isn’t in it. While I did want to see Crash Bandicoot make his debut return, it just wasn’t going to happen at this time. (Maybe as DLC.) Anyway, I can easily say that this game packs a punch when it comes to content. With 20 diverse and addictive characters, hundreds of unlocks, and a competitive multiplayer, PS All-Stars will keep you hooked for hours on end. I can’t remember the last time that I played a multiplayer game that has kept me this interested in the maps and characters.

As an addition, the game also has extra costumes can that can be unlocked for each character. If you were lucky enough to pre-order, you also got 20 extra costumes. Though these do nothing other than offer a new cosmetic look, it is nice to the eye and avoids seeing the exact same characters on one screen. As for the other unlocks, you’ll be able to unlock minions that’ll cheer for you in combat along with new playercard icons and backgrounds that can be customized (not too deep though, just in selection).

A Fighting System With Depth

As I explained in my preview of the beta, All-Star is set in a 2D plane where players brawl with iconic PlayStation characters. Yes, this is all quite similar to that of Nintendo’s Super Smash Bros. series, but that doesn’t make it a complete rip-off. The biggest thing that All-Star does to differentiate itself is that it uses a system where the only way to get points is by eliminating your opponent(s) with supers. Superbot Entertainment has truly crafted an entirely new system different from that of the Smash series. Both games feel completely different enough from one another.

Each character has their own unique combo set, though all characters have the basic attack special layout. So pushing ‘up,’ ‘triangle’ or any other direction and attack button combination will work on any character, with each offering their own attacks. Not only that, but the build of a character matters as well. Take for example Big Daddy (Bioshock). This guy is a massive tank, meaning he moves slow but deals damage heavily. Sackboy, however, is the exact opposite. He’s small, which gives him an advantage at dodging specials. However, his attacks aren’t as effective as Big Daddy’s. With Raiden, he’s built exactly as he is in the MGS series. He’s fast, can run up walls (the only character) and utilizes a sword more efficiently than the rest of the characters.

With that said, it’s in the the combo (and Super) system where all the depth comes in. There are so many combos and all of them are different for every character. So, if your someone who enjoys mastering a fighting game, than All-Stars is for you. For a novice player, you can expect them to spam buttons continuously, but for more advance players, you’ll be seeing them pulling off some amazing moves. Thankfully, they aren’t completely impossible to break, however, seeing that the game has added a dodge, guard, and recovery system, which allows anyone to easily counter against these combos. 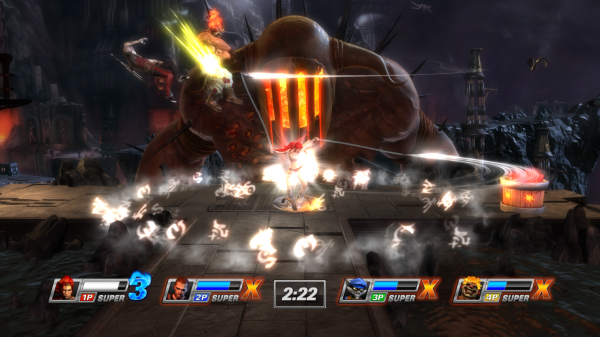 The Supers also add some strategy to the whole mash’em up brawler genre. Do you hoard your meter up till a full level 3, or do you try to get quick kills with level 1’s? Constantly, players will be asking themselves when is the right time to strike with a Super. And like the combo system, each character has their own Supers. Some of them are more difficult to perform, such as Sweet Tooth’s. But with a little practice, it eventually becomes easy to perform the level ones. Level twos are usually Supers that can take out a minimum of two players, but I have seen it take out three (same with a level one). Level three Supers will typically net you 3 kills no matter what and possibly more.

Originally, I thought the game was going to a larger number of modes. Sadly, I was wrong. The game, besides the single player stuff, only has two modes from what I’m aware of. There’s Free-for-All, and then there’s 2 vs 2. In custom games, you are allowed to play with stocks, meaning that you only have a certain amount of spawns. Otherwise, this game is lacking when it comes to matchmaking  modes. Hopefully they’ll add 1 vs 1, King of the Hill, or other fighting mode favorites later on in the game’s cycle.

An Active And Supporting Community

Matchmaking in All-Stars is made simple, and the game does support custom games along with an easy to invite party system for friends. Beside the normal launch day issues, getting into a full lobby is fast, so you’ll never have to worry about finding anyone. Support from the developer side seems to be there to as SuperBot Entertainment has said that they’ll continue to support the game with new DLC and characters, so you don’t have to worry about this game dying out any time soon.

Skills Matter When It Comes To Balancing

The biggest issue that many players will come to realize is that “X” character is “overpowered” or “Y” character is too “underpowered.” From my long hours of match playing, I have come to realize that all these characters are as balanced as the user using them. I am a complete mess whenever I use Sweet Tooth. He’s sluggish and his combo sets are hard to perform compared to other characters. Yeah, I’ll win some rounds with him, but not so often as I do with someone like Radec or Big Daddy. Yet, I have played against other players who’ll absolutely dominate with him. 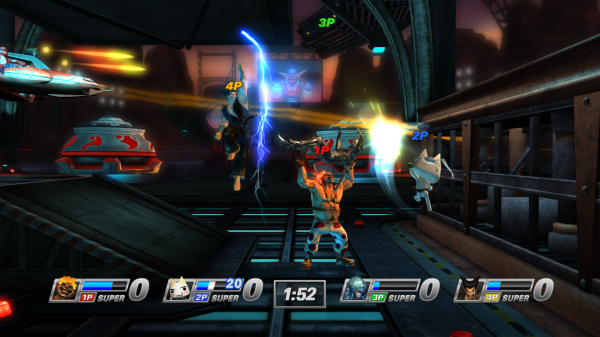 Overpowered, you say? No. I’m Just A Better Player.

The balancing all really comes down to the player skill level, which is what this game is all about. There are just some players that are far better with one character then you’ll ever be, which will make you believe that specific character may be “overpowered.” That’s just my opinion though. Like I said, I don’t see anything wrong with the current balance level.

The one thing that truly impressed me the most was how fluid the connection between the PS3 and PS Vita is. Not once throughout my online career with the Vita did I encounter any hiccups simply due to the fact that I was playing on a difference console. Both platforms perform identically, so for those who feared the Vita getting a shoddy console port, you don’t have to worry about that. The games are literally the exact same across both consoles. Both have no virtually no frame drops (60 FPS on both console), and graphically speaking, they look identical. Whether you’re an owner of either console, you’ll be happy with the version that you buy. 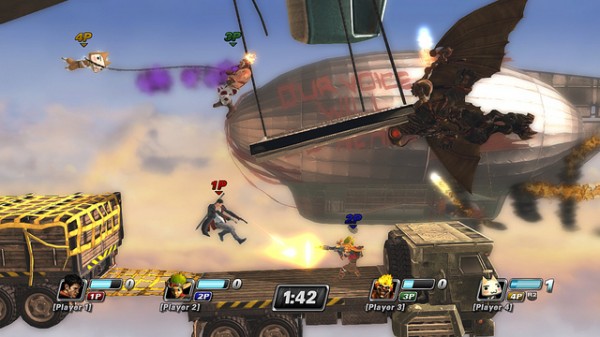 The Songbird from BioShock Infinite flies high above the sky as you battle it out against other players on the crashing Cargo Plane from Uncharted.

Of course, the game wouldn’t be any fun if it didn’t have any memorable maps to support these intense battles. No map in the game is just a map. In fact, they are mash-ups or maps collaborated with two or more game series. For those familiar with the Uncharted 3 Cargo Plane scene, you’ll be quick to notice it as PS All-Stars will bring that very same moment back, except instead of traveling into an uncharted desert, you’ll be flying through the city of Bioshock Infinite, all while the Songbird is gearing up to attack the plane. All the maps available in All-Stars act this way with some sort of mash-up happening in the background, and at times, it can even affect the playing field itself.

Since the title launched on Tuesday, I have been playing this game nonstop. I am very addicted to it, so yes, I would say it’s an excellent title to own. It has a great line-up of characters (with two free ones coming next year), the balancing is well thought out, and the gameplay has a great amount of depth. While visually the game does look like Smash Bros., I can safely say that these two titles play on completely different levels.

Remember, if you own both systems, buy the PS3 version as you’ll get the Vita version for no additional charge.