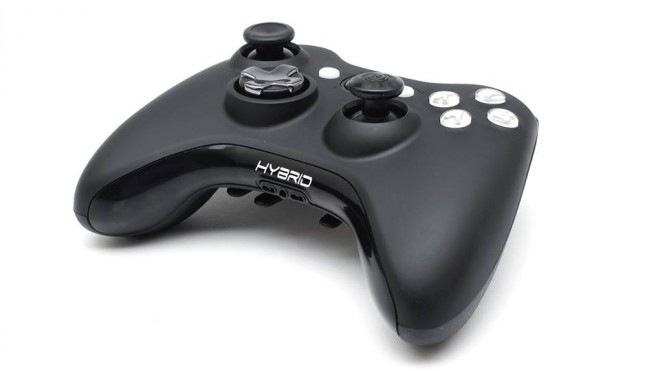 SCUF is a company all about innovation. Their gear has provided professional, hardcore, and even casual gamers alike with some of the best gaming experiences available on consoles this generation. While other console gaming hardware manufacture’s claim their designs to be miles ahead of their time, and to feature countless improvements over the original Xbox 360 or PlayStation 3 controller design, nothing ever feels as ‘right’ as a SCUF controller does. Just ask the thousands of professional gamers who rely on their SCUF controller game after game, competition after competition, and championship after championship.

Last month, SCUF announced the Hybrid, the latest and greatest redesign of the original Xbox 360 SCUF controller which has, up until now, been based on 1st party controller designs. Already, it has been welcomed warmly with the professional gaming community and has become practically a requirement in order to stay competitive, but what exactly makes it a “Hybrid”, how is it better than the original SCUF design, and – the question you really want to know – should you buy it?

Let’s start by taking a look at what’s so “Hybrid” about the controller the first place. Unlike the original SCUF controller whose casing design belongs to it’s 1st party creator, Microsoft, the Hybrid opts for a completely redesigned bottom half which is of SCUF’s own design. That means you get the familiar face and button layout of the original Xbox 360 controller design, but with a grip that far surpasses anything else on the market.

The default SCUF Hybrid model I was provided with for review features a grip coated in a high-grade paint that sticks to your skin far better than most other materials. The handle shape curves in at a steeper angle right at the last joint of your fingers, allowing you to literally hold on to the controller tighter while giving your finger tips more room to rest. It’s honestly the best feeling grip I’ve ever felt in a controller and that alone makes the Hybrid a clear choice over the original design.

Thanks to the integration of a built-in lithium ion battery, the Xbox 360’s clunky battery pack will no longer get in your way – perfect for those with longer fingers or bigger hands. It also significantly reduces the weight of the controller.

The real benefit over the original SCUF appears in the form of its new rear paddle design. The most obvious improvement is that you can now request an additional set of paddles, bringing the total number of paddle buttons to four, of which the left- and right-most ones are completely re-mappable. On my particular model, the two inner paddles were set to X (inner-left) and Y (inner-right). If you really need me to spell out the advantage of this new design, it means that, a.) you never have to take your right thumb of the right thumb stick ever again and , b.) you can change your paddle layout on the fly as you move between games. That means that you can perform all the important functions in any first-person or third-person shooter like jumping, reloading, melee-ing, or weapon switching without losing your ability to aim. Remapping the two outer-most paddles is as simple as holding down the small black button located on the left at the top of the controller, pressing the button you want to re-map, and then pressing the paddle you want to re-map to.

Another clear improvement is the design of the paddles themselves. No longer are they simply screwed on to the bottom of the controller, protruding outward from the controller’s underbelly. Instead, their strength is reinforced by being built into the shell of the controller, making it nearly impossible to pull to the side, if that happens to be a habit you might have formed previously. I also found that, for my hand size and shape, the two outer paddles rested perfectly on my middle fingers, negating any movement to reach them. On the flip side, some with a similar hand shape might find their comfort compromised as you can no longer use your middle fingers to grip the controller. In the end, it might just be a simple matter of getting used to it.

Finger on the Trigger

Keeping to the under-side of the controller, the triggers have been left untouched. My model in particular shipped without trigger stops, but being someone who plays multiple FPS games, it was for the better, as they are primarily only compatible with the Call of Duty series. My SCUF did come with adjustable triggers, however. A small alan key provided with the controller allows me to depress each trigger to the point just before the function of aiming down sight or firing my weapon kicks in, minimizing any sort of travel time.

The inclusion of stops would keep one from over-squeezing the trigger, making one’s finger lightning fast on the trigger of any semi-automatic weapon like a marksman rifle or pistol. Whether you opt for them or not, the adjustable triggers offer enough of an advantage, especially if you’re not playing at a competitive level.

The face of the SCUF Hybrid has been left relatively untouched. The default model comes in a matt black finish with white face buttons and a SCUF-branded home button surrounded by a green LED light. As with most controllers, you can opt for an adjustable d-pad as well as concave or convex thumb sticks. My particular model arrived with two concave sticks, but despite not having the extra height with a convex ‘look’ stick on the right, the grip and shape is extremely sticky and comfortable. Most FPS-heads will opt for a convex right thumb stick, as it is said to increase precision in aiming.

This is my Rifle

Speaking of options, there are a number of choices to be made with the Hybrid. Sadly this is where some of the controller’s more unfavorable aspects rear their ugly head. A Hybrid fully loaded to the brim with features will set you back a whopping $285 USD – that’s with every feature thrown in, but without any additional accessories. The base Hybrid model starts at $125 USD while the FPS Hybrid model starts at a more moderate $87 USD – $180 fully loaded.

That said, there is a very wide range of aesthetic options that will also allow you to theme your controller around your favorite competitive gaming teams. A lot of them include some pretty bright and funky colors, which you may or may not be in to.

Is it Next-Gen Enough?

At the SCUF Hybrid’s price point, it begs some extra thought and care in your purchasing decision, especially with the uncertain compatibility with next-generation consoles.

As it stands, SCUF has yet to announce any plans to support the Xbox 360 Hybrid on the Xbox One, though they have confirmed that “SCUF controller features are being developed and will be available for the next generation of consoles; SCUF Xbox One and SCUF PS4 and are likely to be released in early to mid 2014.”

So, why even craft a cutting-edge controller for a “dying” console generation in the first place? Well, SCUF is convinced that the current-generation console is, in fact, not dying and still has a couple years left in her. This is based on Microsoft’s intent to support the Xbox 360 over the next 5 years with estimates of over 20 million Xbox 360s being sold in the next 2 years. And, with a hefty Xbox One price tag of $500 USD, it would not be unexpected to see many gamers stick with the current model for at least another year or two.

So, with that in mind, you need to ask yourself a couple questions: Will you be sticking with the Xbox 360 for a little while longer and what kind of gamer are you?

If you’re anyone like me who primarily enjoys FPS games like Call of Duty, Battlefield and Halo on a consistent basis and who allocates a fair portion of your yearly budget towards games and gaming gear, then the SCUF Hybrid is a no-brainer. It will seriously improve your game in any FPS, or even TPS, and is well worth the price tag considering the amount of hours you’ll be sinking into the use of this controller.

If you’ll be hopping on the Xbox One ship as soon as it sets sail this Fall, then you may want to consider holding on to your wallet until SCUF details what they have in store for next-gen.

All considerations aside, the SCUF Hybrid is an innovative and masterfully-crafted Xbox 360 controller that boasts everything a professional to hardcore gamer could ask for.

For more information on the controller and to even customize and pre-order one up for yourself, please feel free head on over to the official SCUF website!

This review was based on a SCUF Hybrid Xbox 360 controller provided by SCUF Gaming.