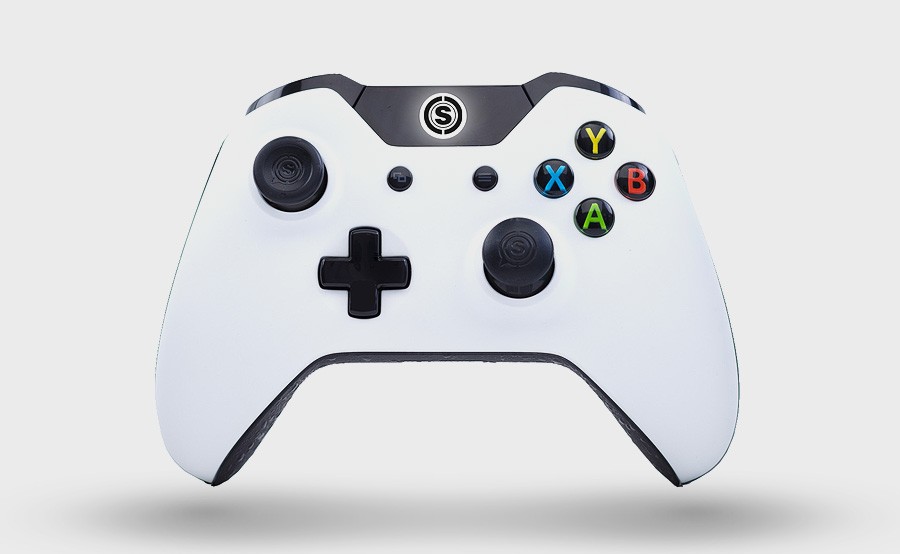 Scuf Gaming is making its 2014 return and is set on providing next-gen console gamers with an attractive alternative to the current line-up of first-party input devices.

The console transition period is always a fascinating one. Both gamers and game developers alike look on as hardware and software manufacturers lift the curtain on their (hopefully) innovative new products while formulating their game plan for the next decade or so. Thus far, both Microsoft and Sony have put forth a noble effort in the design of their upgraded Xbox and PlayStation controllers, respectively. But with ever-shifting demographics in today’s console audience, I’m left wondering why one specific crowd in particular isn’t on the forefront of their minds. I’m talking about the vastly growing sub-section of shooter fans that undoubtedly makes up one of the largest — if not the largest — slices of the console gaming pie.

Microsoft, for example, touts an impressive 40 plus innovations to the Xbox One controller over what the Xbox 360’s controller had to offer. That’s a lot of improvements, big or small. But I would argue that Microsoft’s new pad still lacks one essential element that I think is critical to the bigger-than-ever audience of competitive-minded first-person shooter or third-person shooter gamers: Options. As next-gen as the new controller is, it sure doesn’t offer me any new ways to play my favorite shooters past the aging set up of two thumb sticks, two triggers, two bumpers, and face buttons.

Enter the Scuf One, a competition-level Xbox One controller from Scuf Gaming that’s as competitive as any competitive gamer would hope and dream for. But what it does best is offer the next-gen Xbox gamer options and new ways to play. That goes for anyone serious about shooters. In this review, I’d like to go over what those options are, and to whom this alternative product might appeal.

Grasping my Scuf One for the first time, I was immediately drawn to its comfortable grip and sticky texture. My particular model came equipped with a mixture of the company’s trademark Scuf Grip and Pro Grip handles. According to their website, Scuf Grip is a 5-stage, hand-crafted, military-grade finish, similar to the grip found on weapon handles. It’s certainly an improvement over the default plastic finish that can be felt where the tips of my ring and pinky finger naturally rest. But I felt the strongest sense of support in the Pro Grip handles that make up the outer sides on the back portion of the controller, precisely where the center of my palms naturally lie. With it’s sticky finish and shaped design, I could feel controller tightly locked in place. I couldn’t recall having to make any grip adjustments during my game sessions with it, which I believe is largely attributed to its grip. Luckily, Scuf’s Pro Grips can be purchased and installed separately, which I believe makes up one of the more meaningful options that the SCUF ONE has to offer.

On the face of the controller, I found Scuf’s thumb sticks offered a similar level of grip that I’ve yet to feel on any first-party input device. Sticks are offered in three different lengths; regular, medium, or long, and have the option of being concave or dome-shaped. Generally, a longer stick offers more precision, which is why you’ll find a lot of pros opting for a longer, dome-shaped right thumb stick for more control over aiming. It took me a few games to get used to my longer sticks, and even required some alterations to my in-game sensitivity, but the results were well worth it. I found an increased consciousness in aiming for the head more consistently. Regardless of length, I feel that the biggest benefit of Scuf’s sticks are the grip, as it simply offers a greater sense of control and noticeably decreases slippage.

Negating the need to take your thumb off the aiming stick to perform simple tasks like jumping and ducking are the Scuf One’s sidewinder paddles. With more depth over the Xbox 360 controller, the Xbox One controller requires a little bit of tweaking to the previous-generation paddle design. The new paddles are wider, angled, and tilted just the right amount to fit precisely where your middle fingers rest naturally. I found it in no way uncomfortable or unnatural, which means you don’t really have to think about it at all. Just one little squeeze of your finger from its natural resting position and you’re performing 180 jump shots like nobody’s business.

Another staple feature of the Scuf controller design is its hair trigger and stop mechanisms. In essence, they simply allow you to not only tighten the distance to the point that the Xbox One’s triggers performs their function, but it also shortens the distance the triggers can be depressed past the point that their function is performed. It essentially allows you to shave a few milliseconds off recovery time by making movements much smaller, which to competitive or experienced gamers can mean life or death. In the case of the Scuf One, they’re now fully removable and internally integrated, meaning you’ll need to crack open the controller’s side panels — a simple but sometimes scary process process — to get access to and tweak the mechanisms. It’s an extra step that you need to take over the previous generation design in order to make adjustments, but it gives the controller a cleaner external look. Note that if you’re like me and tend to hop from shooter to shooter, you’ll likely want to skip this feature as it primarily works best with Call of Duty. If Call of Duty is your jam and is the one shooter you play day in and day out, then you’ll definitely want to consider adding these mechanisms.

In addition to these different levels of performance-enhancing options, there are also literally hundreds of ways to customize the controller with different color schemes, logos, and lights. My particular model came in a matte white finish, which sure is a pleasure to look at, but it made it easier to notice the settled black particles that tend get scratched off the black thumb sticks after heavy use. A quick brush or wipe down is sometimes needed after long play sessions, so bare that in mind if aesthetic maintenance bothers you.

Lastly, a quick word on build quality: Scuf’s design is built off of Microsoft’s first-party controller, meaning you won’t get any of that cheap, plastic-feeling commonly associated with third-party products. This is the Xbox One controller as you know it, but improved. It also comes with a sturdy connector cable built from a stiff rope material, so you won’t have too much trouble in the way of damage. Overall, the build quality, including the exterior paddles, are held to a high and satisfactory standard.

I find you get the best results from the Scuf One about 40 minutes into a game session, after you’ve played a couple of matches and are really beginning to feel warmed up. At that point, the margin for human error, with regards to inputting commands and slippage, becomes minimal. Normally, any mistakes at that point can likely be attributed slippery thumb sticks, sticky buttons, or a weakened or cramped grip — things that are naturally out of your control. That’s where the Scuf One really picks up slack. When you don’t have to worry about losing grip, slipping, or trying to press multiple buttons at once, you can divert 100% of your focus to taking care of business. Best of all, the SCUF ONE simply takes no issue with you demanding more from your controller. When that adrenaline boost kicks in and you’re feeling on point, this guy keeps you embedded in the experience when other controllers might pull you out of your zone. Personally, I like to describe it as a controller that just gets out of your way and allows you to express your movements and actions without resistance.

But who exactly is the Scuf One for, on a consumer level? For competition-level gamers it’s practically a requirement, but a casual gamer that picks up one to two games a year, spends little on gaming peripherals, and maybe only “Prestiges” or “Regenerates” once or twice in a game like Call of Duty or Titanfall, may not exactly find the appeal, especially with its $100+ premium asking price. But if you’re one of those guys or gals that invests hours into your favorite shooter games on a daily basis and doesn’t mind allocating a hefty portion of their gaming budget towards gaming gear, chances are you will benefit from what Scuf Gaming has to offer and won’t find anything else like it on the market.

In addition, I’m also noticing a surfacing trend among both current and upcoming shooters: Enhanced mobility. I’m talking about games like Titanfall, Destiny, and Call of Duty: Advanced Warfare that let you (or will let you) perform maneuvers like double-jumps, slides, dashes, etc. With movement becoming more and more complex in first- or third-person video games and the constant need to make use of the jump button, I find that the traditional controller layout just simply doesn’t cut it anymore. Again, with re-mappable paddles, Scuf gives you the options and breathing room to play with, allowing you to take full advantage of mechanics that are already built into the game and are there for you to make use of without having to resort to alternative grip styles.

To address the elephant in the room, you’re probably asking, ‘But isn’t that cheating?’ The Scuf One certainly gives you the edge over others playing on standard controllers, but there’s a few things we need to consider. First and foremost, it’s in my humble opinion that the standard controller design is clearly dated and a lot of what a device like the Scuf One offers should have come standard with the factory Xbox One controller. Considering the direction we’re currently headed in with shooters and the constant strive to build better and innovative next-gen hardware, I’m surprised options like these aren’t the norm. When you’re on a massive kill streak, the last thing you want to have to worry about is about slippage or about having your reaction time hindered by a limited and aging controller design.

Secondly, PC gamers have had the pleasure of customizing their input devices for decades with countless mouse and keyboard variations and innovations. Year after year, a newer and more efficient mouse designs with better accuracy and more buttons appear on the market, and it’s the hard truth that, generally and idealistically speaking, those who spend more money on their gaming peripherals will get more out of them. I don’t think console gaming should be any different.

Lastly, there is a clear line that separates legitimate play and cheating, and I don’t think Scuf crosses it. There are no “rapid-fire mods” or mechanisms that perform actions for you. As I said earlier, I believe Scuf’s primary purpose it to simply eliminate any resistance to what you are naturally capable of. So, game on!

You can build your own Scuf One controller by visiting the company’s official website. Prices start at $109.95 USD.

PlayStation 4 users will want to keep an eye out for the upcoming SCUF 4PS controller which you can learn more about right here.

If you’re still gaming on the Xbox 360, be sure to check out my review of the Scuf Hybrid Xbox 360 controller.

This product review was based on a Scuf One model provided to us by Scuf Gaming at our request.