For anyone interested in the Xbox One, Microsoft’s family sharing plan was a big deal.  It would be the first time a console gave you the ability to share your games digitally.  Then, almost arbitrarily, MS pulled the plug on it while also reversing their DRM polices.  To say MS screwed up the Xbox One’s reveal and post-reveal is an understatement.  Not only did they try to severely restrict the user’s control of their purchases, but then they removed a core feature that set the Xbox One apart from the competition.

Don’t get me wrong, Microsoft came up with the idea of Family Sharing and it’s a wonderful idea, but they screwed up in it’s execution, royally.  Valve announcing a comparable plan is a brilliant move on their part to enrich the already praised feature sets of the Steam store and software.  It gives Steam users something new and innovative, pushes the transition from physical to digital media distribution, and most importantly, it puts pressure on Sony and Microsoft to offer something similar.

Considering MS’s initial intent with the Xbox One – i.e., if you don’t have internet, buy the X360 – it’ll be interesting to see how they adapt to Valve basically picking their dumpsters for the gold they threw away. Rumors of MS bringing back the Family Sharing Plan have been buzzing for weeks and Valve might have just told MS to either do or do not, because when you’re trying to win a console war, there is no try, only do.  Trying is what we like to say the Dreamcast did. 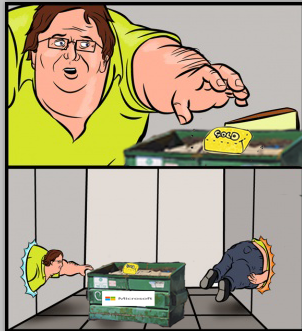