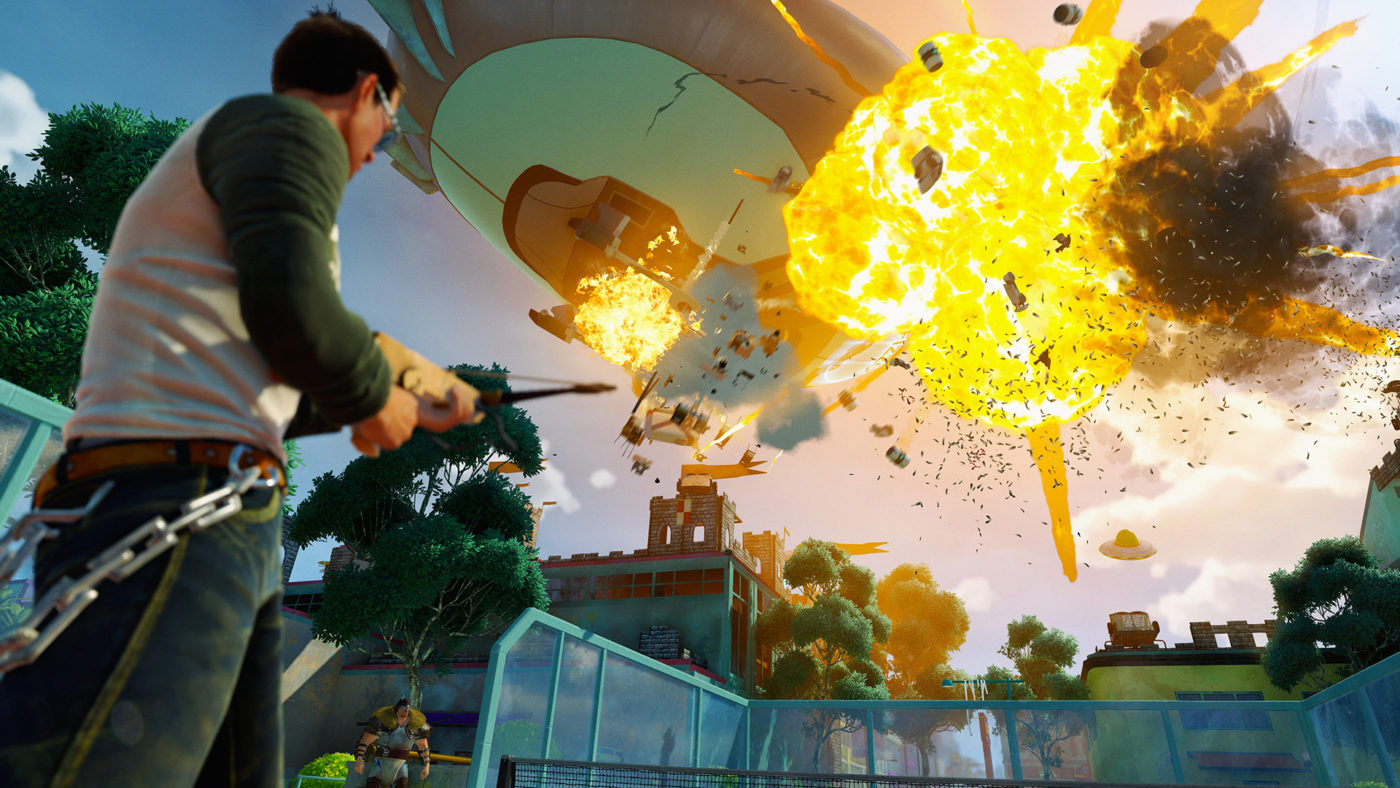 What do you get when you cross mutated monsters, bright colors, vulgar language, and high-speed traversal shooting? You get Insomniac Games’ Xbox One-exclusive debut, Sunset Overdrive, an over-the-top and blindingly fast-paced thrill ride. Touting the catch phrase “Welcome to the Awesomepocalypse” it more than lives up to the billing.

It’s a good thing too because Microsoft is putting a lot of faith into Sunset Overdrive being a system seller for the green team. A stalwart of the Sony stable for many years, Insomniac brought the PlayStation brand some of its best games with franchises like Spyro, Ratchet & Clank, and Resistance, to name a few, so the jump to developing an Xbox One-exclusive took many by surprise. It looks like the move paid off because Sunset Overdrive is one of the best Xbox One games we’ve seen yet. 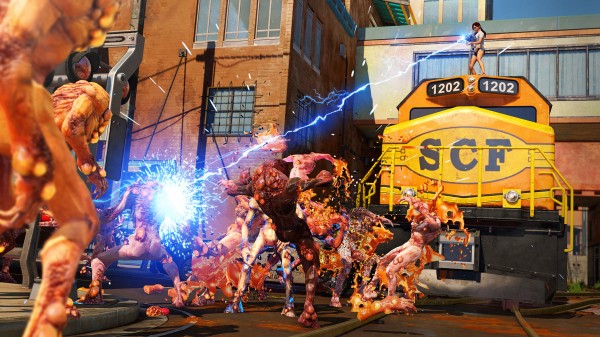 If you’ve yet to hear about Sunset Overdrive, allow me to fill you in on the basic premise. Set in the fictional metropolis of Sunset City in the year 2027, the story is based around the disastrous release of an energy drink called Overcharge Delerium XT. The company that produces the beverage, Fizzco, is having a massive pre-release party in Sunset City three weeks before Overcharge is to be released to the masses around the world. Unfortunately, due to the fact that the energy drink has been rushed to market and not properly tested or approved, there are certain side effects one might consider to be unfavourable… like turning into psychotic mutants. Following this mutant outbreak, the city is quarantined and when Fizzco comes in to cover up their mess, it’s up to you to take back the city and expose their wrongdoings.

Jumping into the game, it wastes no time throwing you to the wolves, or the OD (the short name for the Overcharge mutated monsters), more appropriately. A very short intro section loops you in on the most basic of the control mechanics (think Assassin’s Creed free running on meth) and you’re off. If there’s one thing I can say for certain it’s that the controls, while simple at their core, are painfully hard to master. The learning curve is a steep one but eventually you’ll find that it just clicks. The key to moving around Sunset City is traversal. You’ll want to grind down power wires, jump and bounce off a car on to a wall, and then leap over to a building all while spreading mayhem shooting explosive teddy bears. Sounds like a lot doesn’t it? Using the A button to jump, the X button to grind, switch from an over grind to an under grind and wall run, and the B button for melee attacks seems simple when you look at it, but it’s far more difficult in practice. The sheer speed at which you move combined with the movements of the enemy in a 360 degree battleground makes for some insane times.

Personally, I think it took me about four hours of solid play before I finally felt comfortable with the controls. Getting the movements down is really important in Sunset Overdrive because the better you navigate the map, the higher your style meter will rise. The style meter is your key to unleashing devastating Amps that can give your weapons boosted powers, open up special melee attacks, and allow you to use crazy Epic Amps. Epic Amps are the top dog OD killers ranging from the nuclear explosion mushroom cloud of Twist of Fate to a lighting tornado. They’re awesome to use but take work to unlock. If you stand still for even a moment, your combo meter will reset to zero and you’re style meter will begin to drain. Standing still in Sunset Overdrive is an easy way to get murdered, so the number one priority is to always keep moving. 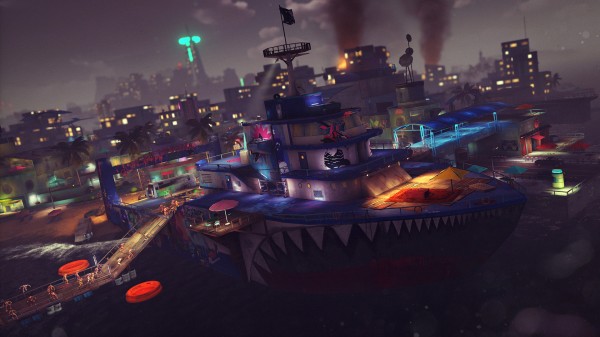 Once you’ve really mastered traversal and the chaos of trying to gun down OD while on the run, then Sunset City is truly open for business. There is so much to do that you won’t even know what to do next half the time. From challenges to story missions to the Chaos Squad multiplayer, there’s never a dull moment. Not only that, there are collectibles for days out on the map that you’ll need to find in order to upgrade and create new Amps. The challenges are a fun aside and can have you completing tasks like smashing as many boxes as you can within a time limit to tricky traversal challenges. If you’re at all familiar with the Tony Hawk franchise and the infamous S-K-A-T-E challenges, you’ll feel right at home doing the traversal challenges. Completing challenges can net you customization gear, cash or cans of Overcharge, all which you’ll want in order to dress up your character with all the latest in vanity items and weapons.

While you’re busy completing missions and challenges, you’ll also earn badges for things that you’re busy doing anyways. You can earn grind badges, wall running badges, OD murderin’ badges, and more. These badges unlock Overdrives that you can use to boost weapon stats, up your damage against certain enemies, or increase the speed at which your style meter increase while traversing. As you can tell, there is a lot in Sunset Overdrive to unlock from abilities, Amps, weapons and more all to customize your character just how you like. 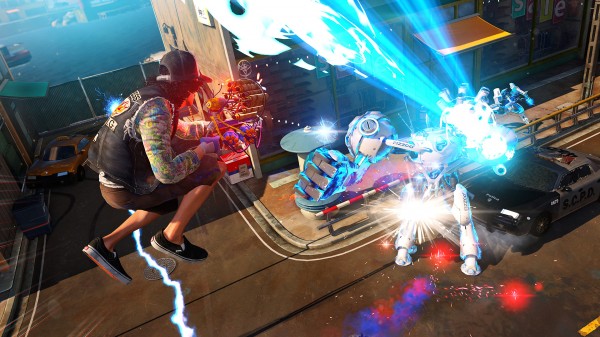 If it isn’t obvious by now, I’ll tell you that customization is a huge focus in Sunset Overdrive, as you’ll find out almost as soon as you pop in the game. More clothing options than you know what to do with and hundreds more unlockables in the game make for every player character being almost 100% unique. For a while, I had a cross-dressing goth gentleman who was the size of a bouncer rocking a pink miniskirt… because WHY NOT? The combinations are endless and often gut-bustingly funny. Not many things make me laugh more than a punk rocker in a unicorn hat sporting a kangaroo codpiece over his junk!

The laughter only starts with the customization of course, as the game itself is one of the more humorous titles I’ve encountered in a long time. The cast of characters from the Amp vendor Floyd to weapon vendor Two Hat Jack are a colorful bunch full of even more colorful language. Nothing is off limits and everything is fair game, it seems. Everyone from hipsters to dude-bros are targets. If you pay attention, there are endless pop culture references to catch too. From the Gauntlet inspired cry of ‘Warrior needs food badly’ to an aside from an NPC saying ‘Damn, that is a tasty beverage’ (Pulp Fiction inspired if you’re too young to catch that one), there are a ton of genuinely amusing moments in the game. You might even get an 80’s music montage… 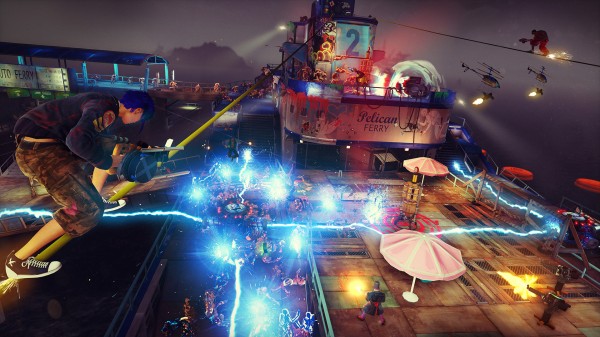 Aside from the single player campaign, you can also get your multiplayer fix with the Chaos Squad mode. Unfortunately, due to a lack of players online during the review phase, I only managed a few sessions, but I still got a feel for what was going on. Optimally built for six to eight players, you can play it with as few as two. I was able to get in a couple sessions with four of us, so while not optimal, still a ton of fun.

You can enter Chaos Squad at any time during the single player campaign by entering a photo booth. They’re scattered all over Sunset City so you’re never too far away from one. When you join the session, the team votes on two options to start the mission. One option increases the chaos in the city which is harder but nets you better rewards at the end. The other gives your a team boost that makes things a bit easier but the rewards aren’t as good. After a few rounds of this, you’re sent to Night Defense.

Night Defense, which is also part of your single player campaign, pits your team against an onslaught of OD while you try and protect your precious vats of Overcharge. This is also where you’re able to place various traps around your space to fend off the hordes. The traps are hilarious and effective! Some of them chop the OD to bits, some blast them away with mega-bass sound and some explode in a ball of napalm. Just like your Amps and other unlockables, they can be unlocked and purchased in-game. 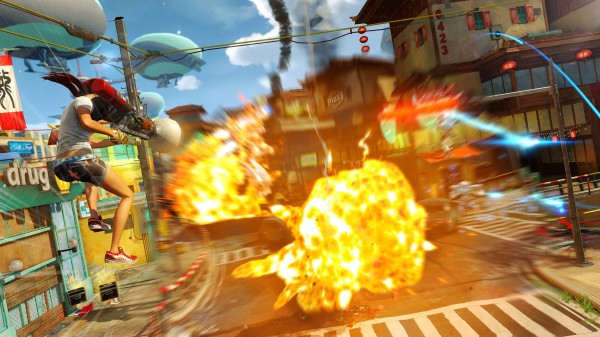 I believe it almost goes without saying that the game is incredibly detailed in the graphics department. Everything pops with color and vibrancy and there isn’t a jaggy or framerate slowdown in sight. The cartoonish style perfectly suits the attitude the game is trying to convey and everything from the OD and Scabs you fight to the characters you meet along the way look amazing. Crazy graffiti and stylized set pieces are all over Sunset City and there are ways to traverse over all of them.

Speaking of the characters you meet, the voice work and sound in general is top of the line. Floyd is riotously funny at times as is Walter, a grumpy old fart you meet early into the campaign. The sound sets the atmosphere well, especially when things get crazy out in Sunset City. As the chaos increases and your style meter rises, the music will follow suit and ramp up at the same time. My only complaint — and this is so minor in the long run — is that most of the music sounded very alike to me. I know that the songs playing were different, but when the shit hits the fan, it all sounded the same to me. In fairness, that could have more to do with me focusing on monster shooting rather than anything else, mind you. Still, it is something I noticed.

So there you have it! That’s a lot to take in, but it really speaks to how there is literally more stuff to do in Sunset Overdrive than you can handle and that’s why it sports a whopping 70 achievements right out of the box. You’ll be busy dropping OD for a long time to come.

It really looks like the risk of recruiting Insomniac over to the guys in green paid off with Sunset Overdrive. The fast-paced action, on point humour, and never ending list of things to do make this game one of the best out there when it comes to bang for your buck. If you can stick with Sunset Overdrive through its tough learning curve, you’ll have a lot of fun with it. ‘Welcome to the Awesomepocalypse.’ They really couldn’t have said it any better.