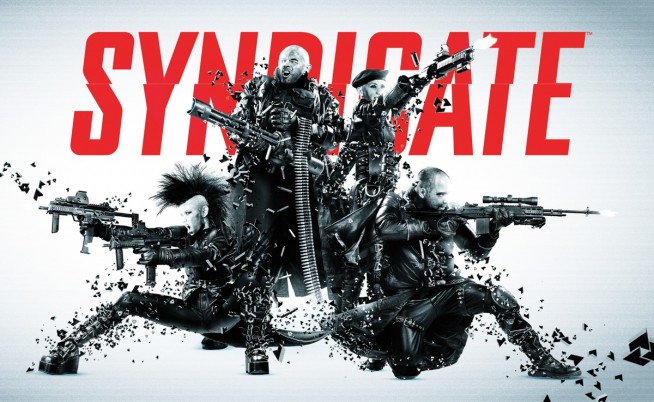 Honestly, I haven’t been following Starbreeze Studios’s modern FPS take on Bullfrogs Productions’ 1993 real-time tactical game, Syndicate, very closely up until now. Upon downloading the recent demo for my Xbox 360 to see what this bad boy was all about, I must say that I was pleasantly surprised.

To give you the basic rundown, Syndicate takes the fast-paced, arcade-like action of Black, the fluid character movement of Battlefield 3 and Crysis 2, and the aesthetics of Mass Effect and Deus Ex and combines these ingredients to create a fun, unique and flashy sci-fi FPS experience.

In this co-op demo, up to 4 players can band together to take on a high-tech mercenary camp in Western Europe set in the year 2069, the only map currently available in this demo. Before heading off into a lobbly, Syndicate’s menus allow players to explore a surprising amount of customizability and unlocks. Players can select loadouts which consist of one primary weapon (6 choices), one secondary weapon (3 choices) and up to two (or perhaps more later on) “apps” (perks or abilities). Apps are selectable in-game using the top three d-pad buttons to initiate. Chip upgrades allow players to unlock and select a number of abilities, both passive and active. Players can also research weapon projects to further improve their weapon(s) of choice. Some of these upgrades include better ammunition, magazine extensions, and different weapon sights among many others. Application research allows players to select and upgrade the different apps that you will be appointing to your d-pad buttons to use in-game. These range from shield buffs to an increase in damage output. Lastly, players also have access to a number of challenges, contracts and stats to keep the addiction factor at a maximum. The leaderboards also allow players to compare stats with friends and view scores for the various co-op maps. It seems that all of the unlocks are available in this demo so players should be able to beef up there soldiers all the way to max level if they sink enough time in.

While you could spend hours in the menus, it’s the gameplay that really shines, as it should.

Starbreeze studios went for a more realistic and “heavy” feel for soldier movement à la Battlefield 3. But they also kept the fluidity found in games like Crysis 2. Players can sprint, duck, jump, melee, and slide to move quickly around the battlefield. Unfortunately, the current controller options do not allow for the more common alternative button layouts for ducking and meleeing. But it is very friendly for left-handed users. When it comes to look sensitivity, players do have the option to get quite picky if need be. Both the sensitivity and acceleration for the X and Y axes are both adjustable.

Upon entering the battlefield, you’ll notice that the chip-enhanced heads up display can be quite cluttered and intimidating at first. Once you’re used to it, however, it can be pretty effective. Holographic indicators are used much like in the Dead Space series. It also allows players to easily keep a tab on the status of others in your party. Objectives are clearly marked and an announcer usually clearly states what you need to be doing if you ever get lost or confused. One tip to keep in mind: use the left bumper/L2 for everything! It will “breach” computers, electronics, shields and also allow you to heal and “reboot” fallen comrades. I would have liked to see some more in-game communication between soldiers. For example, there were a number of moments when I wanted to spot enemies in hard to see areas that my teammates were missing, or moments when I needed to direct a teammate to focus on a certain objective because either I was too far away from it, or I didn’t have the proper loadout or enough ammunition to tackle the situation myself. Lastly, points are awarded for kills, assists, taking down “generals” and accomplishing other tasks. These points go towards a number of unlocks and also can be used as a way to compete with fellow teammates.

One thing I absolutely adore about Syndicate’s co-op in general is that it does not directly tell you how to tackle certain tricky situations, but rather allows players to figure it out on their own. Two examples come to mind here.

Early on in the Western Europe map, players are tasked with making their way past an APC with a laser guided light machine gun. There is no way to destroy this LMG without getting close to it so players are forced to intelligently move past it using cover. Tackling the situation alone, you’ll find that the red laser pointer will constantly be painted on your chest, meaning that the gunner is focused solely on you. However, this is the perfect moment for teammates to move up, knowing that fire is being drawn. Once it indicated that it has turned to its next target, you’ll know it’s your turn to move up.

Mid-way through the level, you will encounter a rather tough enemy with impenetrable shields. At first, you might have no idea how to get past these shields, realizing that your weapons do nothing. Upon closer inspection, you’ll notice that the shields can be breached or hacked using the left bumper/L2. But once again, attempting this on your own will simply get you killed as this particular enemy is rather ruthless. Again, teammates need to draw his fire so that others can get a chance at taking down his shields. It might not be possible in one go, so players will have to work together and take turns drawing fire and breaching shields.

Oh, and the dubstep music rocks. In fact, I’m listening to the 3-track soundtrack available on Syndicate’s official Facebook page as I write this.

I will definitely be looking forward to Syndicate’s release on February 21st. Stay tuned for more Syndicate news and make sure to try out the demo, currently available on the Xbox 360 and PS3.