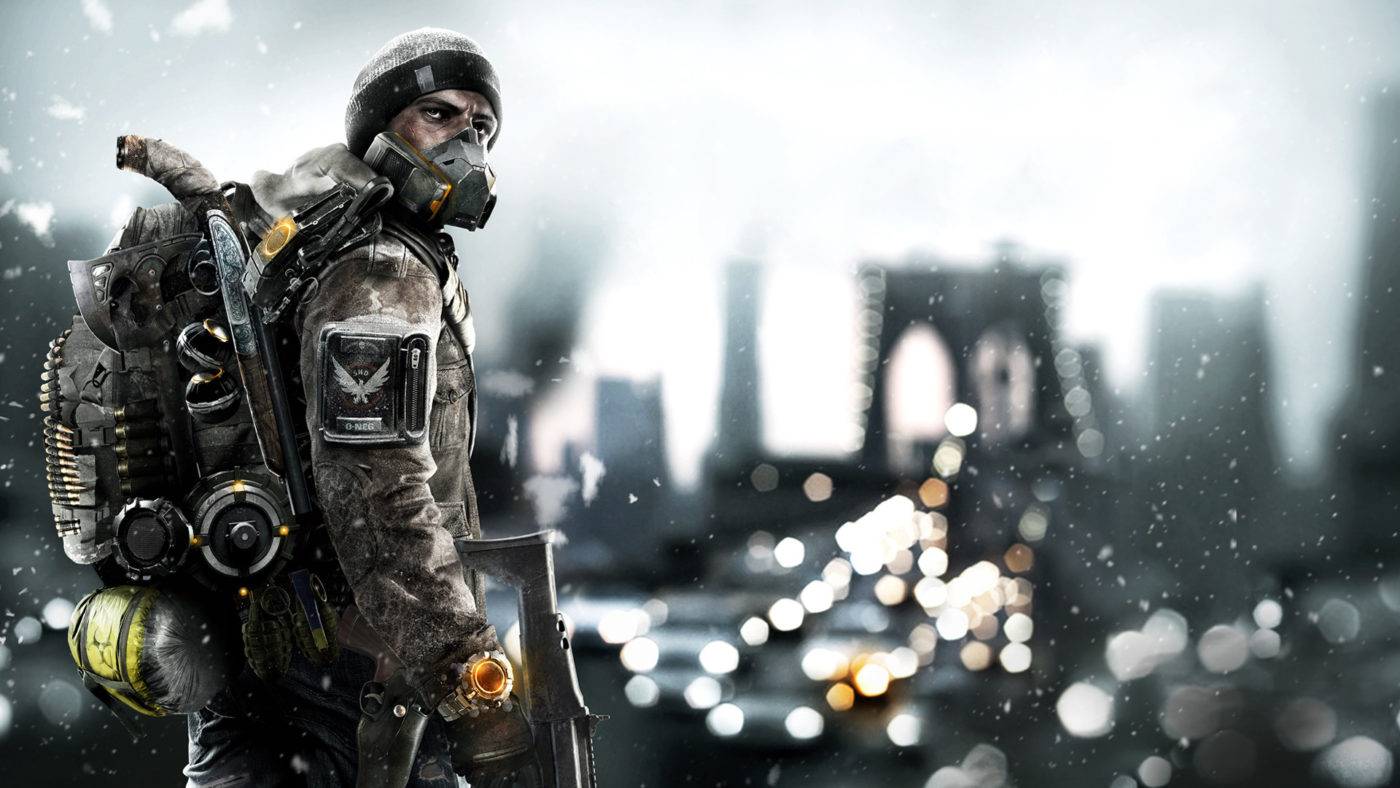 Ever wonder what you’d get if you mixed the writing of Tom Clancy with a loot-driven RPG-shooter that takes place in a lawless cityscape amidst a severe crisis? Tom Clancy’s The Division is just that: an RPG-driven military shooter from Massive Entertainment that tasks you with restoring order in mid-town Manhattan after a devastating event wipes out the majority of the borough’s inhabitants.

The first thing you should know about The Division — and what is quite possibly the largest misconception surrounding the latest entry in the Tom Clancy line of games — is that it’s an RPG first and a shooter second, not the other way around. The Division plays like a traditional Western RPG; enemies soak up damage as attack numbers pop up over their head. Meanwhile, players use abilities and items to increase strength and weaken enemy defenses. In fact, you’ll find yourself analyzing numbers on a constant basis, making sure stats like DPS, Health, and Skill Power are always topped off by equipping the most efficient weapons and gear. If numbers are your thing, Massive has got you covered with almost every stat you could want to know.

Outside of character-building and leveling up to use more powerful items, you’ll spend Medical, Tech, and Security points on the three respective wings of your Base of Operations in order to unlock better abilities and gain access to powerful resources. This is accomplished by completing story missions, side missions, and encounters spread throughout an impressively detailed open world that is all neatly presented on a world map. 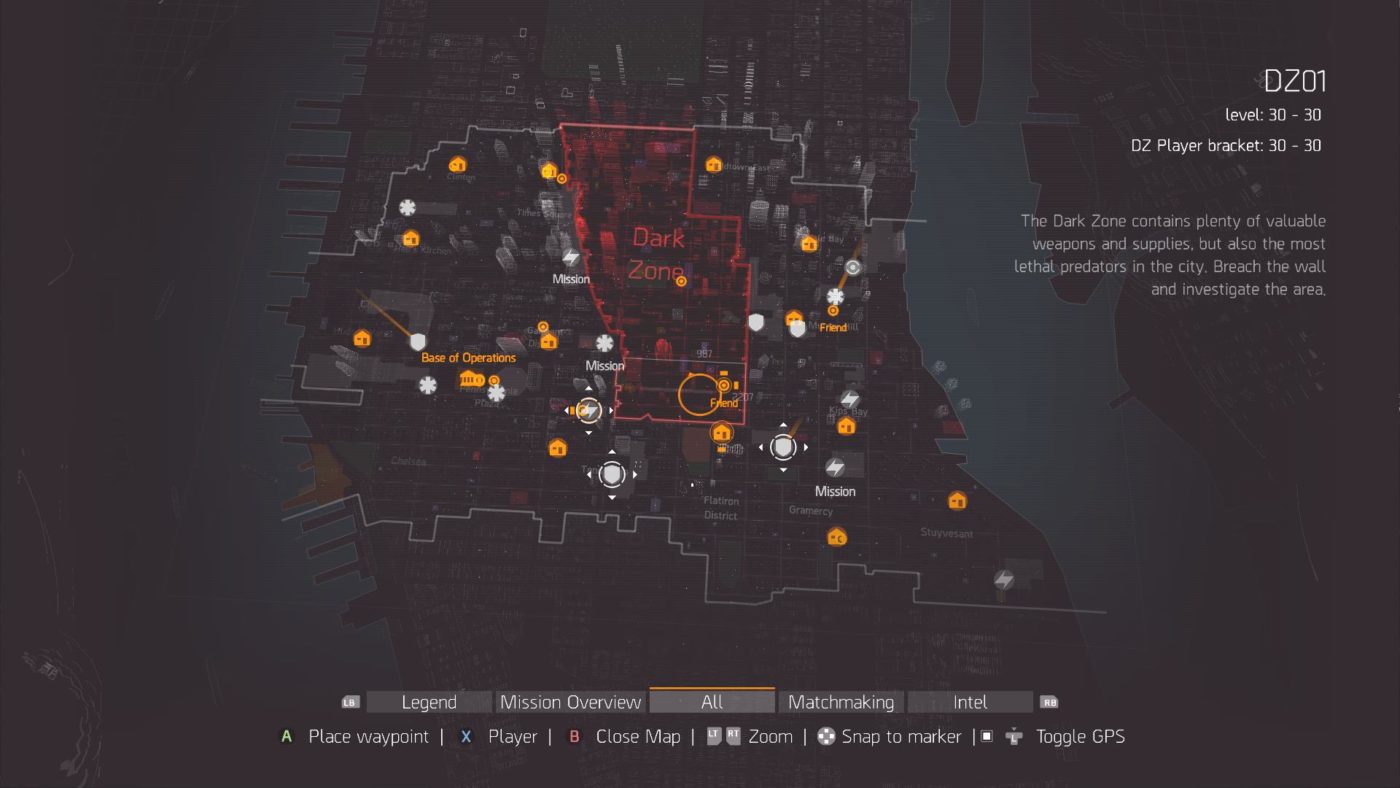 If you play The Division like any other shooter, you’ll likely be put off by the lengthy checklist of tasks to wrap up and the “spongey” nature of your opponents that won’t go down with even the cleanest headshot. Want to take out enemies quickly? You’ll have to earn the proper gear to buff up your stats high enough. But, even still, there’ll always be those elite few that require patience and perseverance as you slowly chip away at their health while fending off waves of henchmen.

The Division presents fairly standard enemy archetypes from the lowly grunt to the sometimes annoying rusher. There are also heavily armed foes and, of course, named bosses. But with each kill comes the potential for — you guess it — loot. Weapon and gear drops have different levels of rarity ranging from common (white) all the way up to high-end (orange).

Without stepping over the bounds of real life, I think Massive did a fantastic job staying true to the non-fictional world presented in Tom Clancy’s stories. Talents gifted by high-end gear are simple but effective buffs like providing a higher chance for critical hits or boosting up your Scavenging attribute, allowing you to find better items. It’s easy to get excited about drops, even without expecting to get your hands on laser guns or plasma rifles. Gear is the name of the game and, luckily, The Division features a mechanic that lets you re-roll certain stats so you can fine-tune your Agent without sticking to a specific class-type, leading to a very satisfying level of customization. 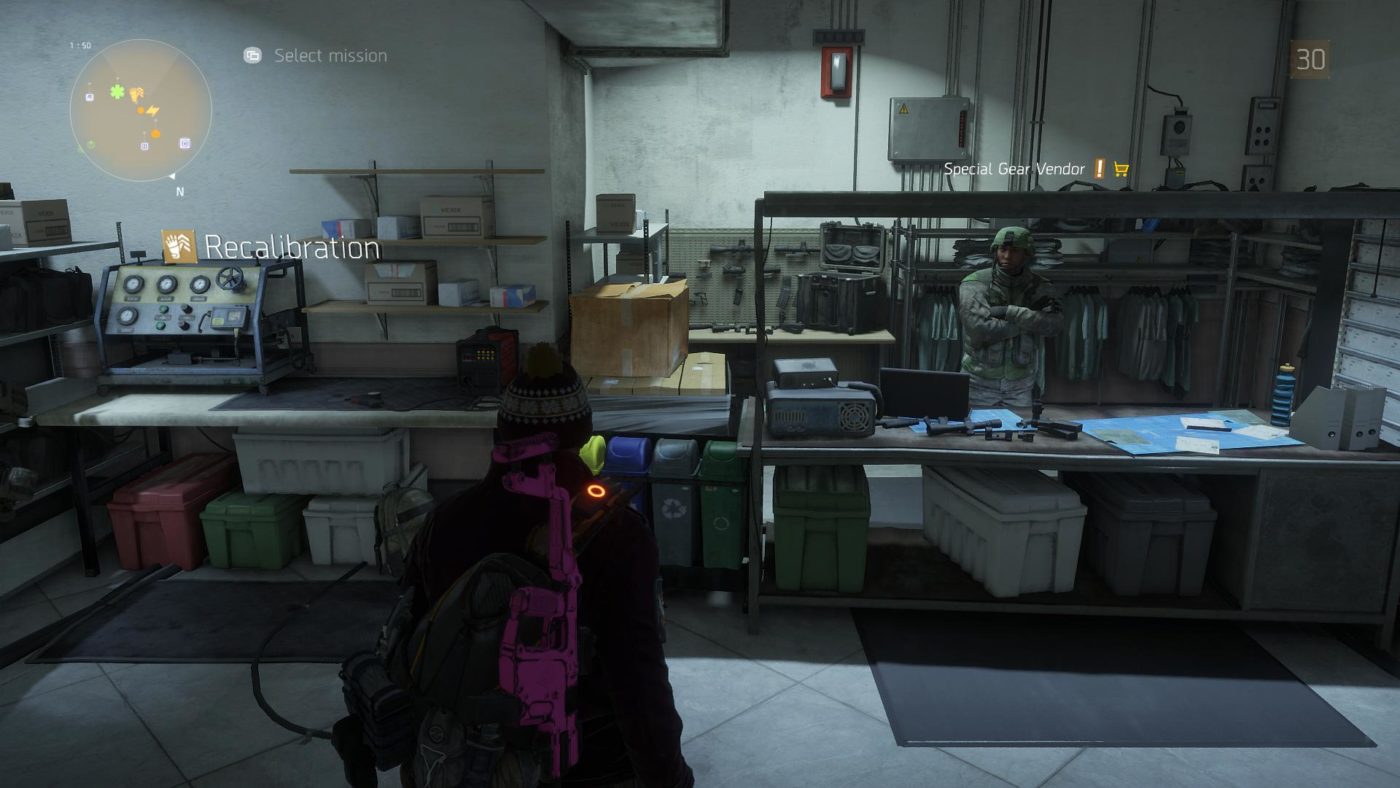 Massive has something special on their hands with The Division and it shows particularly in the believable atmosphere of the post-crisis world they’ve created. As a native New Yorker who happens to live minutes away from where much of the game takes place, it feels eerily realistic, rivalling even the immense playable worlds developers like Rockstar have created in the past. From the brightly-lit streets of Time Square that now reek of abandonment and despair to the project houses over at Stuyvesant, now desolate and overrun with looters, Massive has built the ultimate playground for the budding government agent looking to bring order to the world.

It’s also just as dense as it is expansive with tunnels and apartments full of items to scavenge. The interior of each building feels as if it’s been created uniquely from one another, unlike most open world games that copy and paste all too often. Some locations require a bit of parkour-ing to navigate through by the use of surrounding objects or fire escapes in order to get to some of the collectible items or to complete some missions. The underground portion of the map is also almost a world of its own; it’s deceivingly big.

While character animations and details are also best-in-class, The Division’s combat can suffer at times due to frustrating cover mechanics. Cover is crucial to your survival as firefights aren’t meant to be fought out in the open. It’s easy enough to get into cover, but un-sticking quickly in order to change position or avoid other dangers is often quite clunky and doesn’t feel very responsive, leading to frustrating deaths. Enemy AI and difficulty is manageable in a fair and challenging way, but the cover system can sometimes just get in the way of what could have been an epic battle. 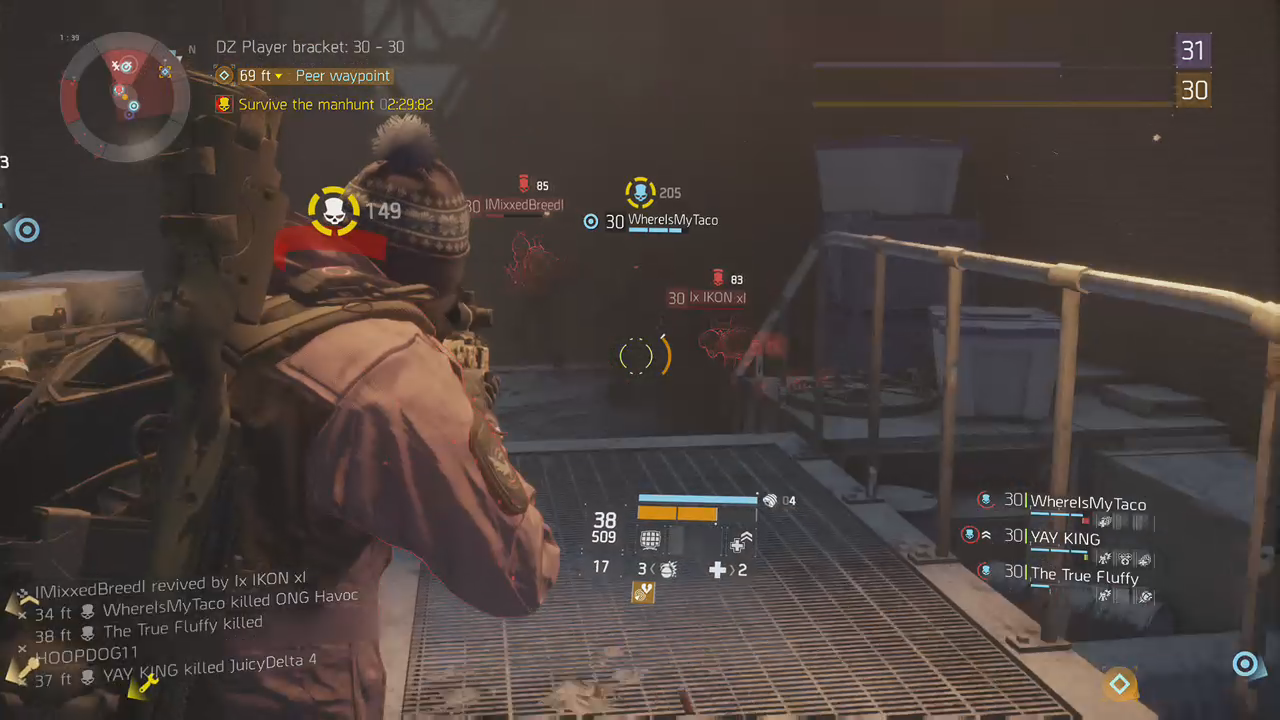 Playing with friends, while the best way to play The Division, also comes across as an afterthought, especially when trying to build a fire team of varying player levels. You never actually see your friends in the world, but only as an icon on the main map. It’s easy enough to get groups started to and invite players from one instance into another, but good luck if you’re a newcomer trying to party up with a friend who’s a much higher level. Difficulty scales to the highest level player, meaning an agent who’s five or more levels down won’t be able to contribute meaningfully. For a co-op driven shooter, it’s too bad you can’t just jump into another player’s game and expect to have a good time if they’re a higher level.

When it does work, co-op combat is top-notch. It requires communication and character builds that compliment one another and mix the right amount of crowd control abilities, buffs, and de-buffs. I especially found a lot of the end-game content to be the right mixture of difficult scenarios, fun gameplay, and tactical team-based combat. But, again, it only works because everyone is the same level, level 30, which is the current cap in the game.

Unfortunately, end-game content is rather barebones, consisting mostly of running the same missions over and over again but at more challenging difficulty levels. Enemies in these situations will soak up bullets, so some players may also be put off by the ‘bullet-spongey’ nature of the end-game bosses. But, ultimately, it can still feel very rewarding when things click and your team works together to get things done. 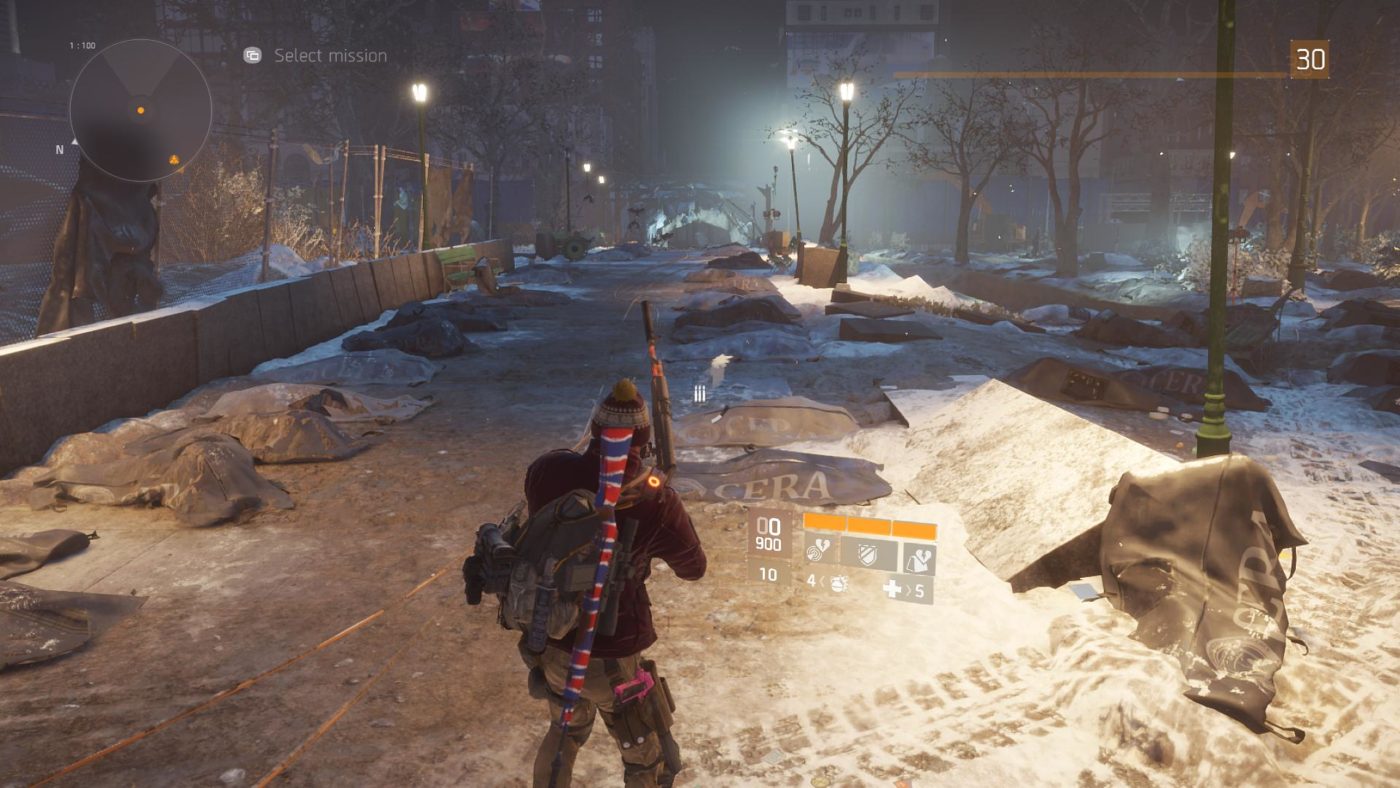 Other than the challenge modes, their isn’t a whole lot to do in The Division’s end game, unless you decide to venture off into the Dark Zone.

To describe the Dark Zone simply, it’s a PvP-enabled (but not necessarily PvP-driven) portion of the map where players police themselves and are the judge, jury, and executioner for every other Division agent. Like the rest of Manhattan, the Dark Zone is populated with enemy AI that drop some of the game’s best loot, but is also populated with other players that will either aid you in your adventure or try to stop you in your tracks. By choosing to go rogue and shooting another agent, you place a bounty on your head that will attract anyone in the vicinity. Should you survive the timer, you’ll be rewarded handsomely with credits that are exclusive to the Dark Zone and let you purchase even better gear. Failing, however, will cost you not only currency, but also experience points tied to your Dark Zone level that is separate from the game’s PvE.

Currently, some of the game’s best blueprints and gear are unlocked at Dark Zone level 50, which you can get to at a slow but steady pace by farming mobs, or by taking risks and becoming one of the server’s most wanted. It’s also not possible to simply walk out with whatever gear you find from enemies. Players must extract contaminated items at one of many designated landing pads before accessing it at the Base of Operations. The time it takes to wait for your chopper can leave you and your group vulnerable, which puts an interesting dynamic on the whole situation as you try to judge players’ intentions.

It gets as about exciting as the players make it. Sure, you might lose a lot more than there is to be gained by going rogue, but it could also be the most fun you’ll have with the game. You never know who’s lurking behind the corner, waiting to try to claim the bounty placed on your head. Sometimes, things get really hectic and you’ll see other agents grouping up to take you and your fire team on, only to turn on one another through accidental friendly fire, turning themselves rogue in the process. Really, the Dark Zone is a giant social experiment that doesn’t always appear to have a ‘point,’ per se, but does lead to some of the more unique moments to be had while gaming. 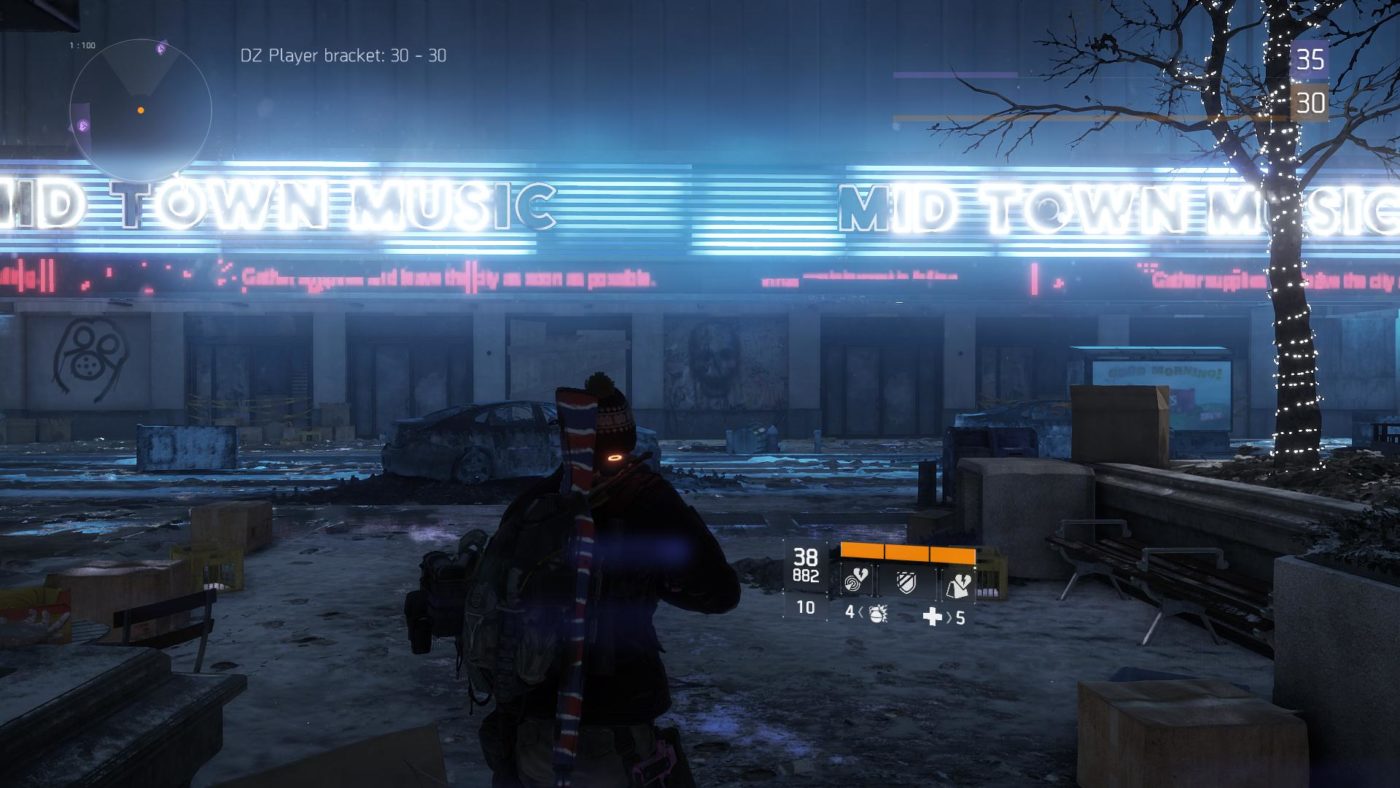 The Division is full of interesting ideas and definitely has a bright future ahead of it. It has the “it” factor with a high level of detail and polish and is especially enjoyable with friends, if you’re all around the same level. The environment in which the game takes place is rich and begs to be explored, which can make putting down the controller between sessions rather difficult. It doesn’t hurt that it’s also one of the best-looking games out there.

It can be tempting to plow through the story content in order to get to the end-game activities as quickly as possible, but I urge players to seriously take their time and enjoy the journey to level 30. In many ways, it’s the best part of the game, as my colleague Tom also recently pointed out. No, there isn’t a whole lot to do afterwards and Incursions won’t be available until April, but the gameplay and combat is worth coming back to, that is when the clumsy cover system doesn’t spoil your fun.

So far, it appears that Massive Entertainment is listening to its player base, as seen in the latest patch that happened to address many concerns, improving its quality of life that will likely get even better over time. Being a one-of-a-kind mix of RPG and shooter genres, despite borrowing a few ideas here and there, The Division is ultimately worth checking out and sinking some serious time into.

This review was based on a retail code of Tom Clancy’s The Division for Xbox One, courtesy of Ubisoft.