Across the board, High Moon Studios stepped their game up and added some great customization features that could literally have you spending a majority of the time just messing around in the menus. You’re probably wondering at this point if Fall of Cybertron is worth your time, let alone the full retail value. Don’t fret, I’ll answer that question for you in depth. 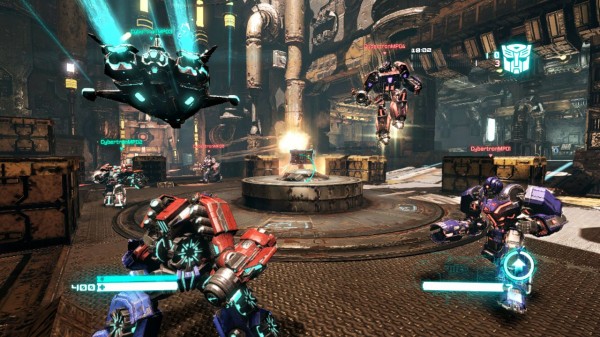 So we start off with some basic information. Fall of Cybertron ships with 10 maps and 4 modes at launch. The 4 modes available are Team Deathmatch, Conquest, Capture The Flag and Head Hunter. The 10 maps available are Array, Convoy, Tempest, Launch, Bowels, Spire, Abandoned, Desolation, Corrosion and Sewers. All of these maps are somehow inspired from the single player campaign. Most of these maps are pretty big, as Fall of Cybertron pits 6 Autobots against 6 Deceptions, and it lacks constant intense action as times. However, this allows strategic vehicle action. After all, this is Transformers.

Team Deathmatch is your typical mode, with the first team to 40 kills winning the match. Conquest is similar to most domination-styled modes. There are 3 capture points you must capture – the first team to 400 score wins the match. Capture The Flag is, again, your traditional mode with 3 flag captures netting your team a victory. Head Hunter will be most familiar to Halo players – kill an enemy and pick up their spark. Accumulating 30 sparks as a team will win your team the match.

The lack of game modes is probably High Moon’s answer to keep these modes populated, as not many people play the Transformers titles online to begin with in comparison to other name brand shooters. This was one of the issues that the last Transformers title experienced once DLC started being released, so hopefully in a few months, this title will still be running strong, as it deserves to.

The most important aspect of any multiplayer shooter is gameplay. You could be the most graphically sound game we have ever seen, if you lack any sort of decent gameplay, nobody will care. This is what Fall of Cybertron has done extremely well. Not only does the control scheme feel right, but everything about the gameplay is extremely fun. Transforming in between your robot and vehicle forms is quick and seamless. Switching between weapons and aiming modes is also quick and seamless. There doesn’t seem to be any hiccups in this area, and that’s something High Moon should be very proud of.

Challenges make their return to multiplayer. Named Teletraan1, the Cybertron Network System, this is the hub for all challenges, leaderboards and Prime Mode. The challenges range from class specific challenges to basic challenges. Completing these challenges nets you XP needed to rank up your character. There are three different tiers to each challenge, with each tier increasing the challenge amount along with the XP reward given. Finally accumulate 25 headshots? Get bonus XP. Finally use your special abilities 5 times? Get bonus XP. Doing basically anything will net you some bonus XP, and this is where a big bulk of your XP is going to come from.

The leaderboards can be sorted to be extremely descriptive. You can narrow it down between friends, worldwide and game mode specific leaderboards. Prime Mode is Fall of Cybertron’s so called prestige mode. You can enter Prime Mode up to 100 times once you reach the max rank of 25 for all 4 classes at once. There are specific Prime Mode appearance unlocks that you can use through the customization options, so heading into Prime Mode will not only allow you to start leveling again, but you get some badass unique and more than likely rare options. 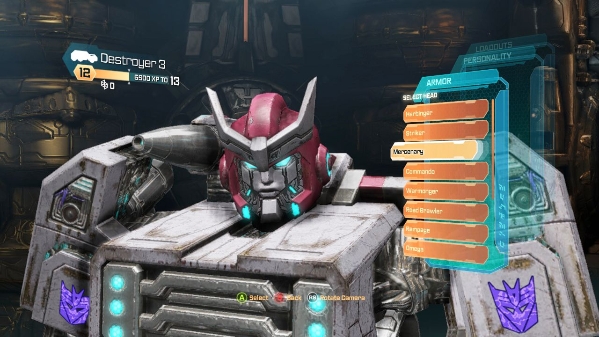 The customization for Fall of Cybertron is off the charts, and is the brightest point on this entire multiplayer experience. You can select each part of your transformers appearance, ranging from the head, shoulders, arms, and legs to their voice, decals and armor set. There are over 10 selections for each body part to choose from, including some Prime Mode appearance unlocks available for the diehard multiplayer fan. You can create your own transformer in many unique ways, or use a default body set of one of the more popular transformers, like Optimus Prime, Bumblebee or Megatron. Choosing a default body will cost you Energon, which you can gain by playing and finishing matches.

There are over 50 different color combinations for both factions to choose from, so you will definitely be seeing different sorts of transformers out there on the battlefield. You can even tweak the metallic shown on your robots chassis. Each class has their own respective weapons, upgrades and special ability unlocks. These unlocks are strictly level based, so simply playing the game enough can get you these unlocks. You can bring along two weapons with you, with there being four total weapons to choose from for each class. 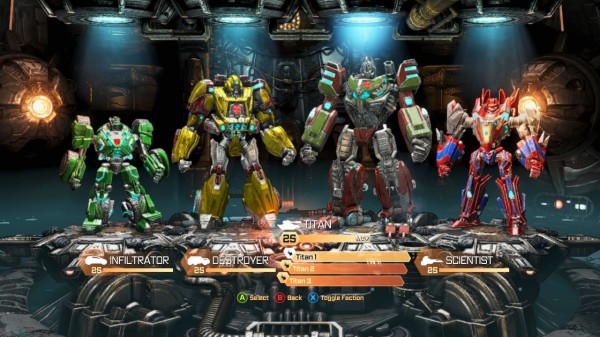 With four main character classes to choose from, you have to pick one which really resembles and plays to your style the best to get familiar to the multiplayer. The Infiltrator’s special ability is cloaking, giving you the edge to be sneaky during combat to cap flags or flank behind an opponent for a crucial kill. The Destroyer’s special ability is a Diffraction Barrier, which is a huge barrier that blocks incoming bullets, grenades and rockets. You should use this when you are bogged down in cover or you see a teammate taking heavy fire. The Titan’s special ability is Whirlwind. This gives you the ability to do a whirlwind melee attack that increases your melee speed and damage. Finally, the Scientist’s special ability is a healing beam. Use this on weakened friendlies for an XP bonus. All four of these classes have their own unique vehicle mode as well, with the Scientist being the only class able to fly. A huge negative and step back was the removal of vehicle abilities. Not being able to barrel role while flying becomes an issue at times, and it is truly a missed feature from War For Cybertron.

Fall of Cybertron allows you to filter your matchmaking experience to Regional or Worldwide. I would suggest sticking to Regional unless you are having a tough time finding players. Throughout my few days online I have experienced the same fate I experienced with the previous Transformers title: some pretty bad lag spikes at random times. I hope this is something High Moon can tweak and improve because when the game runs as intended, it can be extremely fun. The same can be said in vice versa, when the game doesn’t run as intended, it becomes extremely frustrating to deal with. 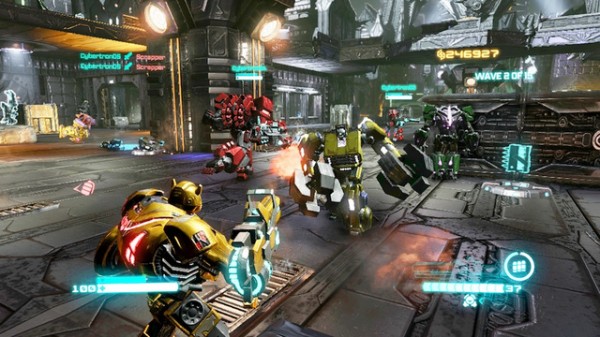 Escalation isn’t necessarily multiplayer, but it is Fall of Cybertron’s epic survival co-op mode, and it returns! In Escalation, you have 15 waves to survive with up to three other players. Each wave gets increasingly more difficult, with more waves and tougher pissed off enemies. Scattered throughout Escalation are weapons, ammo, health and upgrades. You can purchase these items with Energon gained from the enemies you kill, and by surviving waves. There are also other key areas you can unlock that are more expensive than what your typical weapon would be. These areas can be accessed by teaming up with your friends and all contributing Energon towards unlocking them. They provide the advantage of extending the playing field to have more room to run around and smash defying Decepticons, or Autobots, depending on the map you’re on.

With 4 launch Escalation maps to choose from, and both factions to choose from depending on the map, this mode can get to be some fun. The character you choose in Escalation is based on the originals from the TV shows, like Optimus Prime, Ratchet, Starscream, Megatron, Warpath, etc. No customized Transformers can be chosen like in the regular multiplayer modes. This mode only adds depth to the overall experience that is Fall of Cybertron and I’m very excited about it’s return.

If you are on the fence about buying or renting this game, head to the marketplace on your respective consoles and download the demo. The demo will give you a glimpse at two chapters from the single player experience, along with the multiplayer map Array on two game modes, Team Deathmatch and Conquest. You are level capped on the demo, so you won’t be able to experience the full customization options and unlockable weapons that are available.

All in all, when the game runs smooth with a proper host connection, I find this title to be extremely fun. My main issue and only concern after playing for a few days is I can only count a few games in which I would consider lag free. Hopefully this is just launch issues being ironed out and the networking can be improved in the future, otherwise I see Fall of Cybertron dying out quickly due to this issue. I have very high respect for High Moon and their dedication to the Transformers brand and it’s fans. They were quick on the trigger to improve the demo, providing balance tweaks to sharpen the game experience.

So, to quickly recap, 10 maps, 4 modes, challenges and some great customization options head Fall of Cybertron’s multiplayer experience. It’s nothing we haven’t already seen before from other games in terms of game modes, although it is nice to finally see a developer make a decent Transformers title for once. The customization alone is a great tool that I was extremely excited to get my hands on with and experience. For any Transformers fan out there, especially the Generation 1 fans, you need to be playing Fall of Cybertron.