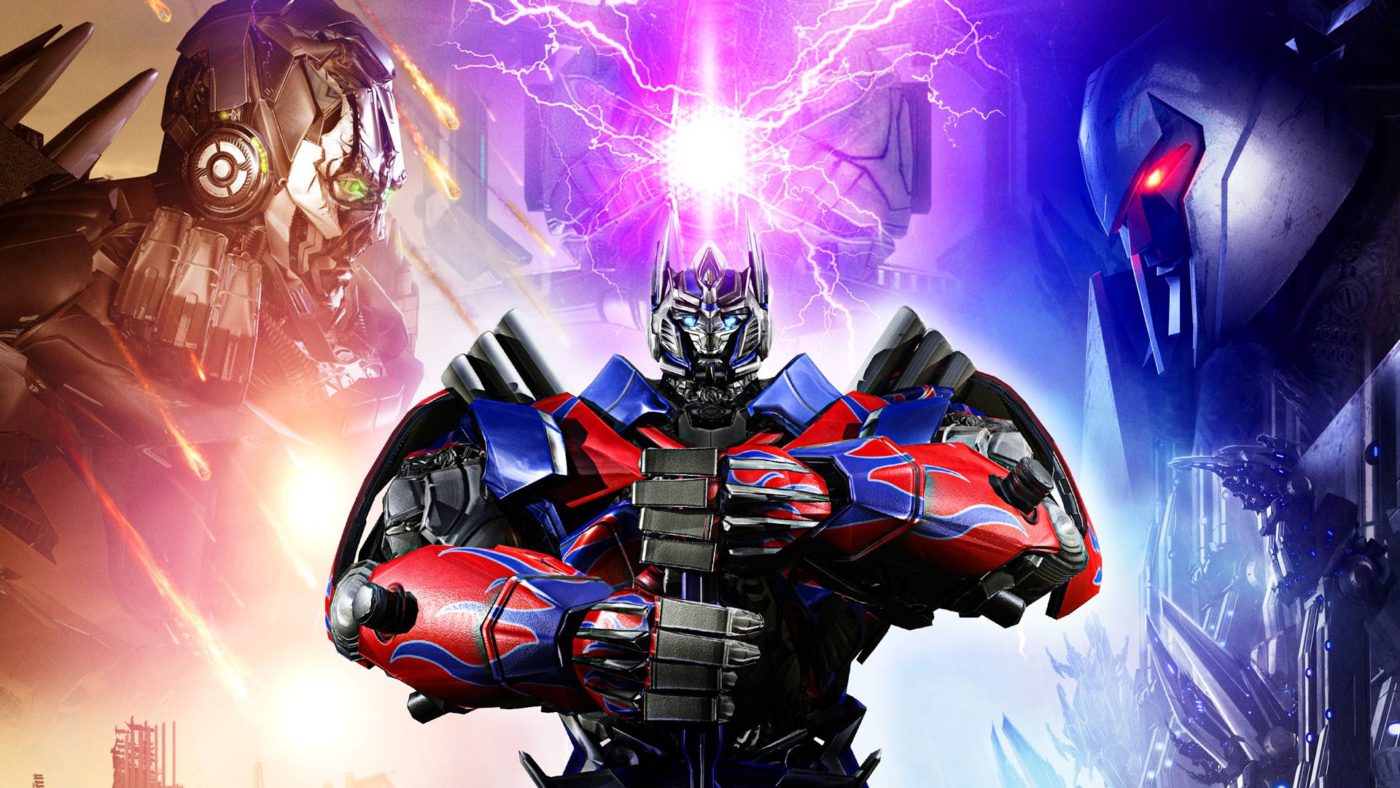 Escalation has always been a phenomenal mode in its own right, but seeing the new developer to the series, Edge of Reality, remove an element so loved by Transformers enthusiasts is a little heartbreaking. Despite that, the game serves as a tie-in sequel to both Transformers: Fall of Cybertron and the just released movie, Transformers: Age of Extinction.

As previously stated, this review will be primarily focused on the co-op mode, Escalation, where four players are pitted against waves of enemies in hopes of surviving, all while unlocking new items and ranking up. I will run through the basics of gameplay all the way through to the leveling system, challenge system, playable characters and how to unlock Gear Boxes which serves as the games “Battlepacks”.

If you’re familiar with either War For Cybertron or Fall of Cybertron, the previous entities in the popular High Moon Studios series, the gameplay here feels just about the same. You are given a primary weapon, a heavy weapon, three T.E.C.H. terminals, an ability and an optional hack. In terms of depth, Edge of Reality threw in a decent amount for Transformers fans to sink their teeth into. 10 primary weapons, 9 heavy weapons, 9 T.E.C.H. terminals (3 slots), 8 abilities and 6 hacks are available to unlock and use.

Most of the fan favorite weapons are back from previous games in the series along with some new additions. The X18 Scrapmaker returns alongside the Neutron Assault Rifle and the Photon Burst Rifle, among others. Whatever your play style is, from automatic assault rifles, to burst rifles, to SMG style weapons or even snipers, Rise of the Dark Spark has you covered. Two additional weapons are available via the Gamestop pre-order bonus ‘Weathered Warrior Pack’ which includes the Electro Bolter and Glass Gas Cannon weapons.

T.E.C.H. are consumable power-ups that you can use at any time to give you an advantage in almost any situation. Each T.E.C.H. as its own unique benefits that will aid you in your struggles, and you may have multiple T.E.CH. bonuses active at once. T.E.C.H. is awarded through Gear Boxes, which are explained in a segment below, so remember to open them as soon as you can. T.E.CH. is consumed on use and can be assigned up to three times at once. You assign these hacks via the D-Pad. These vary from temporarily boosting health regeneration, to a deploy-able shield barrier, to destructive gravitational bombs and even 2x, 3x, 4x, 5x and 6x XP multipliers. Choose wisely, as these are depleted after use!

Unlike the T.E.C.H. terminals that expire, the abilities are something that sticks with you through each battle and each wave and is never depleted. These abilities range from a Battle Sentry that shoots at incoming enemies to a Heal Beam that heals teammates, or a Hover Slam that grants the ability to hover in the air and smash into the ground, dealing damage to nearby foes. Depending upon your play style — whether you are offensive, defensive or somewhere in the middle — there should be an ability that best suits your preferences. As for me, I’m a rusher/attacker, so I liked to use the Heal Beam since I’m taking heavy fire. It helped in most cases, but it ultimately depends on how much help you get from teammates and which wave you are on. Each Transformer has their own default ability, but once an ability is unlocked via a Gear Box, it is available for every Transformers character to use.

Hacks serve as a way to make the game harder in turn for higher XP gain. For instance, you could choose the Quickshots hack which increases your fire rate but also grants your enemies more health. This hack grants you +150% towards your XP progression. Hacks are completely optional, but if you want to obtain your goal of reaching level 25 and going into Prime Mode, it might be a good idea to tack one of these on. If you’ve got the guts, go ahead and use the No Shield Regen hack for an additional +300% XP. Hacks are available until you die or finish a game of Escalation. 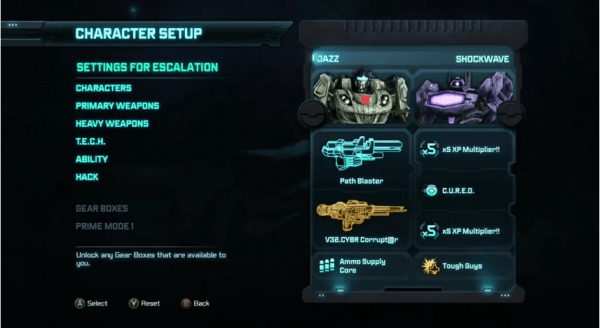 As for playable maps there are a total of 8 to choose from, which, despite being well designed, are pretty disappointing. These vary and take place on Earth and Cybertron. From a visual stand point, the Cybertron levels stand out far more than the Earth levels do, but the graphics in general are nothing to gawk at. Rise of the Dark Spark honestly could pass off as a launch title from the Xbox 360 or PlayStation 3 era. Most of these Escalation maps are small to medium sized to fit in with the 4-player co-op theme. There is no word whether Edge of Reality will be releasing maps in the future via DLC.

One of the impressive things about Rise of the Dark Spark is the very large playable character base. With over 40 characters, including pre-order bonuses and different variations of the same character, there shouldn’t be an issue with who you want to play as.

The challenge system works like your typical run-of-the-mill shooter. Doing challenges grants you XP to level up, in turn granting you Gear Boxes. Completing a challenge will also net you a Gear Box. Each completed challenge tier will grant you an even rarer Gear Box. Challenges consist of anything from Killing 100 enemies, to Killing 5 Titans or even using an ability X amount of times. With over 75 of these challenges to complete, there’s more than enough room to explore and try unique gameplay options to spice up the experience. 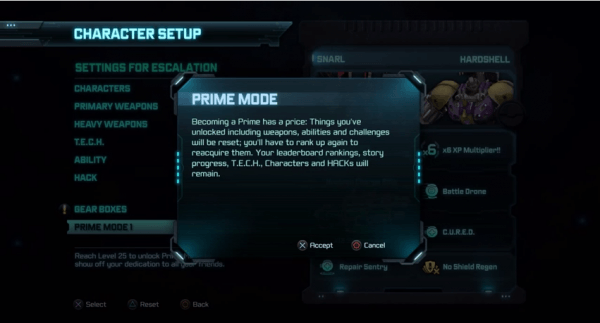 The leveling system is as you would expect. It’s unified between the single player campaign and Escalation mode, so XP indeed does come in bunches. Gain enough XP and you’ll be on your way to Prime Mode, which acts as the Transformers’ way to prestige. There is no word yet as to how many Prime Modes exist, but I will gladly update this review once known information becomes available.

Gear Boxes contain a randomized collection of rewards that can aid you in your battles. A box could contain new weapons, weapon upgrades, characters, hacks and T.E.C.H. for you to use during the campaign or Escalation. Gear Boxes also unlock new characters and abilities that you can use in Escalation. You can earn more Gear Boxes by leveling up and completing challenges. Each challenge contains different tiers, so further completing each tier will grant you a higher Gear Box tier to unlock. As an example, completing the first challenge tier will unlock you a Bronze, while completing that challenge again will net you a Silver. These tiers range from Bronze, Silver, Gold and Prime. Disappointingly enough, rewards do not seem to be stagnant to a certain tier. You can unlock the same items from Prime boxes that you would from bronze boxes. It’s an issue that should be addressed via a patch, but this remains unlikely.

FINAL ANALYSIS – IS IT WORTH YOUR TIME & MONEY?

Rise of the Dark Spark is disappointing to say the least. It has all the potential in the world, but falls flat on its face. From a cheap, unrewarding leveling system, to a small number of maps, not much is improvemed from what High Moon was doing last generation. Edge of Reality strikes out on this one. Is this game worth the full retail price of $60 USD? Hell no. If you can find a friend to rent it off of, that would be your best bet. Although Escalation mode is quite fun, its replayability runs dry after a few go around’s and the rewards all feel bland and repetitive and soon become so easy to obtain. With this being the only multiplayer component available, it’s hard to recommend this to anyone, even Transformers diehards. Let’s hope hope that High Moon Studios is busy in the dark prepping the next masterpiece in the series.

This game was reviewed on the Xbox One.

EA Sports UFC Multiplayer Review – How Does This Fighter Fair in the Next-Gen Arena?