by Tom Gregorio
in Features, Reviews

With the release of the Castle Map Pack marking the conclusion of DLC for War Games Map Pass owners, it appeared 343i was moving past Halo 4 and setting their sights towards the next-gen consoles. What a nice surprise then to see the Champions Bundle DLC announced at this year’s RTX, immediately dispelling that notion. Champions brings along with it a bevy of new armor and weapon skins to outfit your Spartan, two maps, and a new gametype. Best of all, you can choose to get all the content together for less or buy just the packs you want individually. All of the new content is a welcome addition, but the inclusion of Pitfall and the game mode Ricochet are easily the two best additions since Halo 4’s launch. 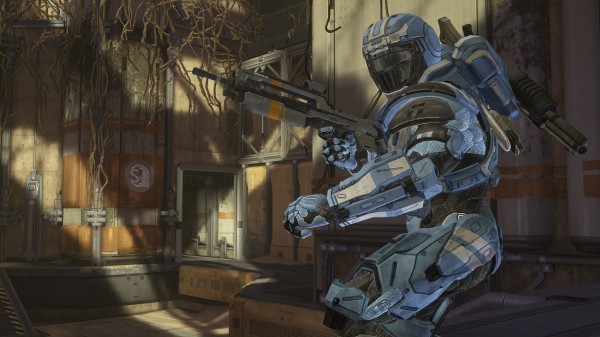 The Bullseye Map Pack includes only 2 maps — Vertigo and Pitfall — which goes against 343i’s convention of releasing 3 maps per DLC pack. This might be perceived as ‘skimming off the top’ a bit, but by including Pitfall, I think 343i avoids any inherent backlash. Pitfall returns mostly unchanged from Halo 3. General aesthetics are tweaked along with the layout of the sword room which now has an air lift and drop down latch. Initially these alterations may come off as subtle, but they open up the map quite a bit as players tend to not camp the sword area to the same degree as Halo 3. What makes this version even more enjoyable is the rock solid framerate throughout the matches. With the exclusion of Ricochet (more on that later), you’ll be hard pressed to make the frame rate chug or dip at any point. Grenade bounces, power weapon spawns, and sight lines are identical from Halo 3. The interesting twist comes with the removal of camo and overshield pickups in favor of armor abilities. Use of Promethean Vision, Regeneration Fields, and Thruster Packs change your whole approach to taking down enemies. Regardless, once you get into a match of slayer or CTF you’ll be having just as much fun as you used to. It’s ultimately still The Pit, and it’s ultimately still amazing.

Lost in the shadow of one of Halo’s more cherished maps is Bullseye’s other map, Vertigo. The layout of the map can be separated into ‘levels’. The lower level is made up of two long caves adjacent to the towers, with a middle pathway connecting the towers. All of these paths can be used to traverse from the first level to the second level, which is made up of the two towers. Both towers have great vantage points and a good amount of cover to boot. What differentiates this map from others is the player initiated switches. Each tower has a single switch which can be activated by shooting it a few times with your rifle. Once the switch has been activated, an electrical charge will emit from the top of the tower after a couple of seconds. In the event a player is caught in the blast radius, the player’s shield will be depleted. The idea is to prevent teams from holding down one of the towers for too long. It sounds great in theory, but I often found it quite easy to find cover on the tower so that I couldn’t be finished off after my shields were discharged. After the initial awe factor wears off, I didn’t bother with the switches in many of my matches. Vertigo still works well in Slayer and King of the Hill variants. Battles that play out on the towers will generally involve long range weapons. Should the battle move to the caves, you’ll be better off with an AR or other close range weaponry. Particularly in King of the Hill matches, you’ll want to be mindful of what type of weapons you are carrying each time the hill moves. Although the electrical discharge comes off as a bit ‘ho-hum’, Vertigo is still an enjoyable map for both slayer and objective gametypes.

Ricochet is an exciting new objective gametype where two teams try to score a neutral ball into the opposing team’s goal. The default score limit is set to 200 points, with 20 points being awarded for each ball thrown into the goal and 50 points for each ball carried into the goal. Ricochet can run the gamut from infuriating to exhilarating due to the highly nuanced nature of the gametype. Knowing when the ball should be thrown in, run in for a touchdown, or cleared off the map are important keys to victory. Defense also plays a key as you will no doubt want a player or two to stay back to try and intercept shots from the opposing team. Keys — I might add — your teammates might not always grasp.

In one match on Haven, there was an absolutely dumbfounding moment where I got a triple kill while holding the ball. I would’ve gotten the overkill, but my teammate gunned me down with an AR along with the sole remaining enemy. The ball fell directly behind the goal with a completely clear path for a touchdown. Instead of picking up the ball and running it in, my teammate camped it out until the enemy team respawned. We never came close to scoring in that match again and ultimately lost. This moment highlights three issues you will sometimes run into when getting paired with randoms: players who don’t understand the gametype, players who avoid the objective and focus solely on K/D, and players who can’t grasp there is friendly fire. Excluding the player factor, the only issue I’ve seen crop up in Ricochet is the framerate plummeting when multiple players are inside a net when someone scores. An explosion will emit from the net each time a team scores which seems to trigger the game freezing temporarily. Often times, players will teleport into new positions once the framerate sorts itself out. It’s not an issue that crops up too often, but it can be jarring in what is otherwise a smooth experience.

On the other end of the spectrum, Ricochet can be an absolute blast when playing with friends or paired up with players who help with good ball movement and clearing the enemy net so the ball won’t get intercepted. A coordinated strategy to get the ball in the net can be more than enough going up against more skilled players. It’s not rare to grind out a win with your top player having 400 some odd points and the opposing team’s top player has 800+. The new announcer audio recorded by series stalwart Jeff Steitzer, such as the final countdown in the closing seconds or each time a team scores, really adds to the tension and excitement of the match. While Grifball and CTF have long been proclaimed as the most strategic gametypes, I think its safe to say Ricochet steps it up a notch and is easily the most in-depth and strategic game type in Halo.

The new Spartan customization options in the Steel Skin and Infinity Armor packs offer a nice variety of stance, weapon, and armor options. All of it is purely cosmetic so don’t expect any boosts or perks for having them equipped. Much to my surprise, the Recharge Armor Mod and Resistor Tactical Package combination isn’t as powerful as I thought. Although they go hand-in-hand quite nicely (especially if you intend on carrying the ball in Ricochet), they can still be countered by other options available to you.

Champions Bundle is the best DLC release to date. Despite having fewer maps than previous DLC releases, Vertigo and Pitfall will undoubtedly keep the current player population coming back. If Ricochet wasn’t released so late in Halo 4’s lifecycle, it could have easily kept the player population falling off a cliff late last year. Ricochet is easily the most in-depth, strategic, and intense gametype to date. The mode could easily have been shelved until Halo 5’s release, but 343i released it for Halo 4, despite the competition having plenty of time to potentially copy it and put it in their games. A lot of the fragmented population has converged on the Ricochet playlist giving Big Team Slayer a serious run for its money. So whether you get the Champions Bundle ($10 USD) or the Bullseye Map Pack ($6 USD), you won’t want to miss out.